Currently, I have half a tank of fuel; that’s enough to get me through this cold snap without the pipes blowing up. The last few days have been an interesting, exciting, scattershot mess.

One thing I learned is that oil appears to have less mass than water; getting highly chilled diesel fuel on your hands is not anywhere near as bad as getting highly chilled water. I theorize that thermal mass tracks actual mass but I’m not going to examine that further. Another thing I learned is that electricians’ tape stickum dissolves into what amounts to black dye if you get diesel fuel on it. If you ever need to get electricians tape stickum off something, there’s no need to reach for a nastier solvent; diesel oil will do.

I got a truckload of diesel fuel: 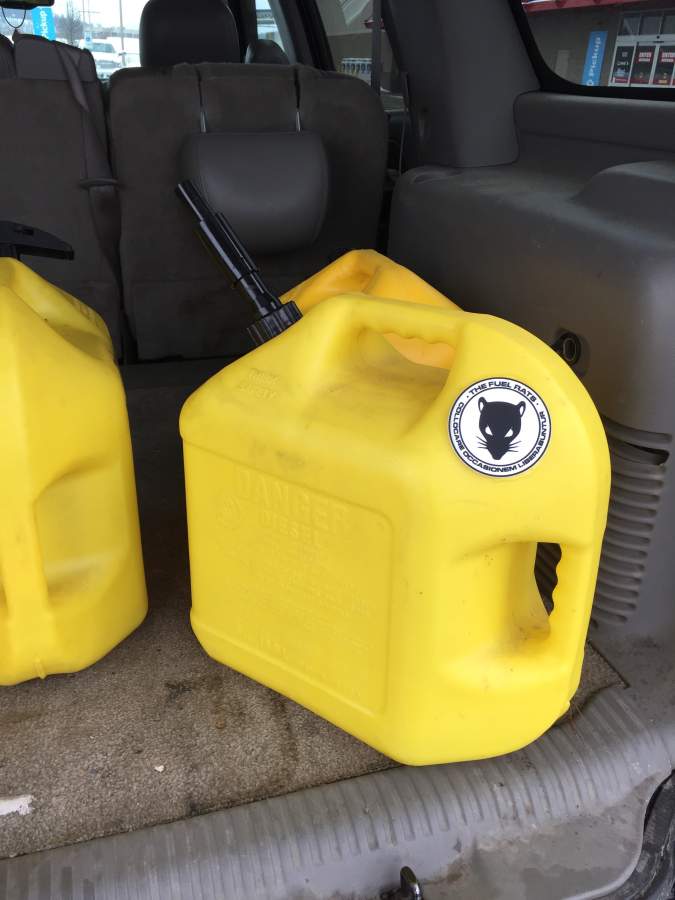 Then I needed to figure out how to get it into the tank. The tank’s inlet is under my porch where it’s easy to knock your brain out on a beam: 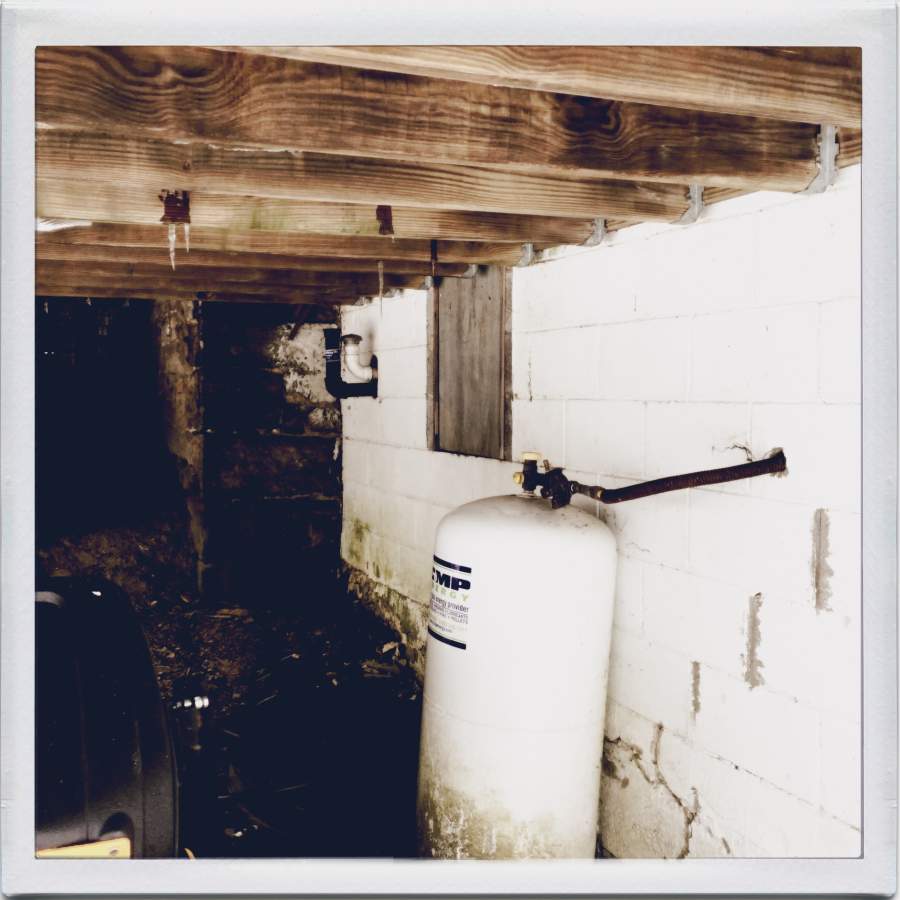 The filler and vent pipe are the things sticking out of the cinderblock wall. I am going to do everything I can to keep the propane from getting involved in this situation. Diesel oil is relatively mellow stuff compared to propane. 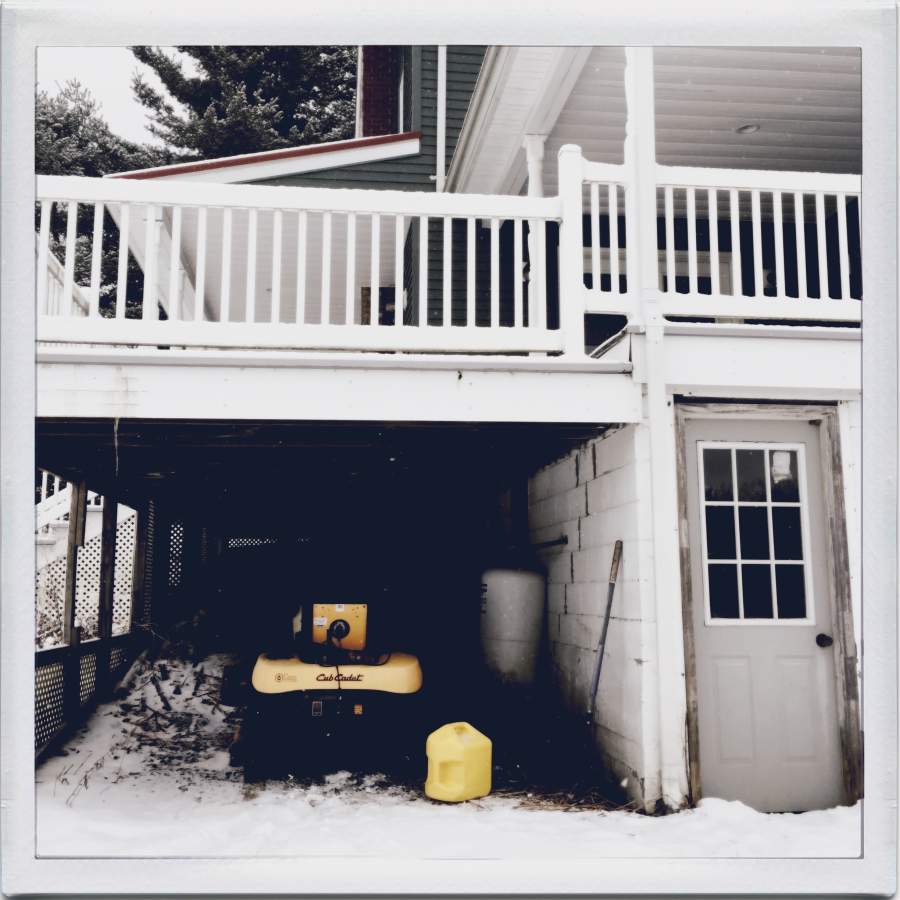 The mower can’t move because I let the tires flatten in the winter. Actually, they do it on their own.

This is Plan A: 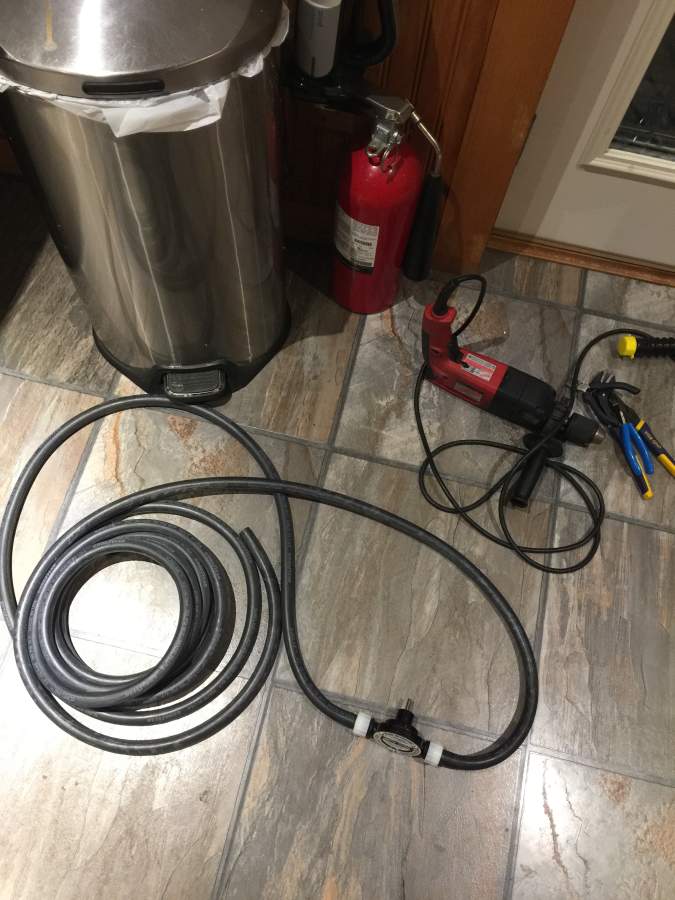 I’m aware that the drill will be full of sparks and I need to be careful not to have oil fumes coming off of me when I engage it. The little rotary pump says on it “not for use with flammables” but I assume that it was put there by a lawyer. Or, that something inside of it will dissolve to goo. The pump is $9 and it seems worth a try. The hose is unnecessarily long because I want to be out from under the porch, in the wind, so fumes can’t build up. That means I’ll freeze but freezing (I’ve done it before) is better than burning (that would be a new once-in-a-lifetime experience!).

It didn’t work. First thing I realized is that I can’t see a damn thing through the hose, so I have no idea what’s happening. I actually have a flow-meter I could have patched in there, but it’s 10 miles away at the shop. So, I run the thing for a while and disconnect one side – fuel squirts out. Then I hook it back up and run it more – the tank does not get discernably lighter. I will freeze before I can transfer 5 5gal tanks. What’s Plan B?

I went inside and made huffing noises and drank tea for a while, then got a big spade-bit and solved the problem Lao Tze-style: 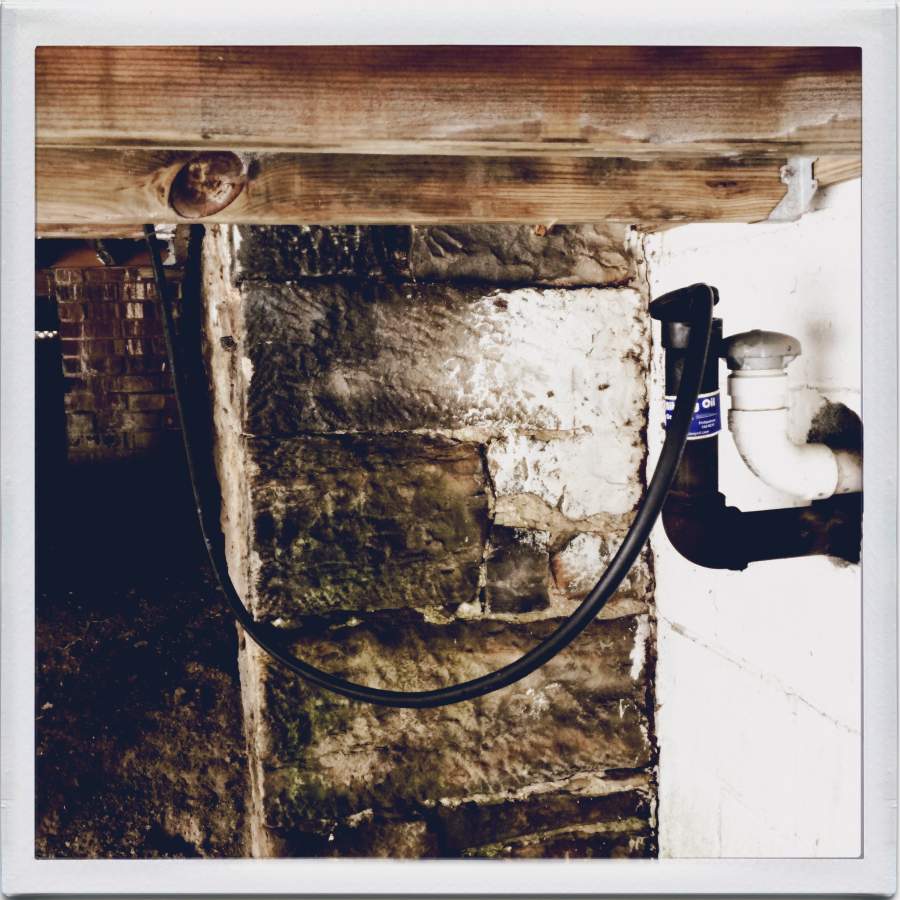 With gravity on your side, things work better.

Lao Tze did not say that, but it works. I took the loop up some once I fed the line farther down the fuel inlet. Drilling a hole in the porch was bothersome but I did it where I doubt anyone will ever notice it – and, besides, you never know when I may need it again.

Up top, there’s a funnel, which I sealed with electrician’s tape and wired to a convenient porch-table. 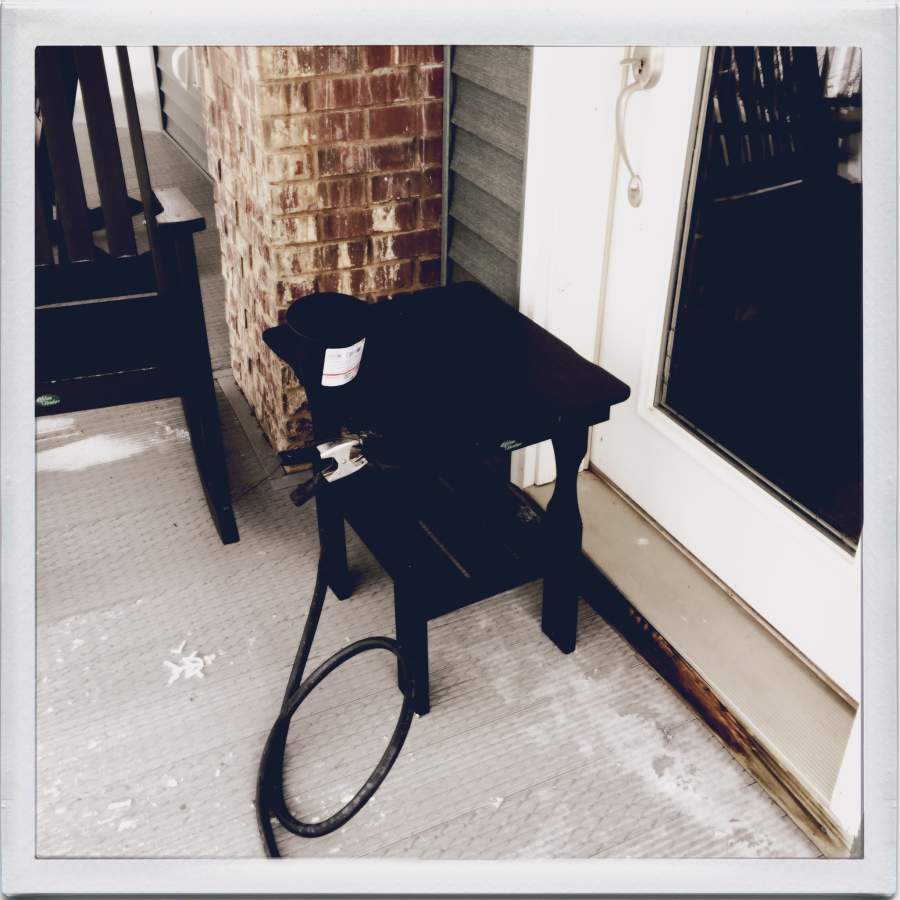 My hypothesis turns out correctly – once the fuel fills the hose completely, it falls down (thank you, gravity!) and sucks itself rapidly down the hose. I can pretty much pour it down as fast as I can and it just sucks it right in. It’s also convenient to have a table and a chair.

Water in the fuel is bad,and I worried about that, a little. 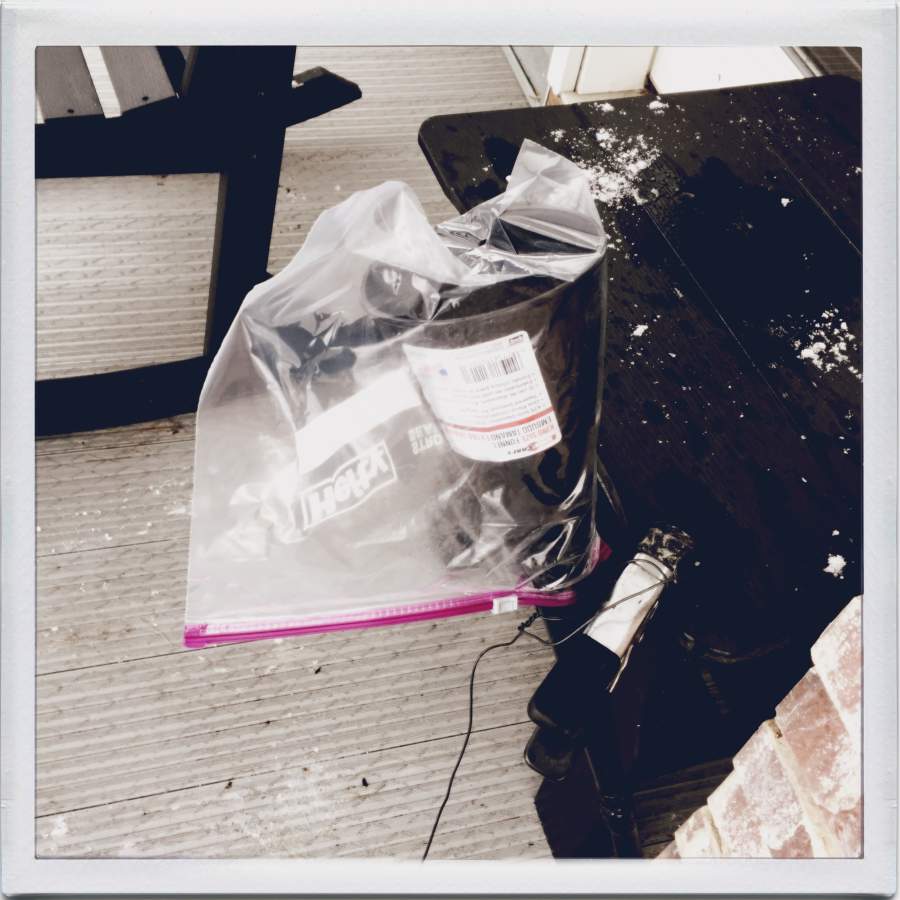 The zip-loc bags with the little zipper are useful for terminating things that need to stay dry, as long as you can orient them the right way. No snow is going to fall into my tank! Doing that gave me time to think about things, including fuel line dryer and gravity-feed pumping systems. It seemed like forever that I was pouring oil but it was probably only a few days.

I will digress into some experiments I did with fuel line drying and gravity-feed pumps when my fingers are working better. I also had some thoughts about jerrican safety systems that I will post, if I am in a particularly grumpy mood.

Gloves are great for protecting your hands against cold but using a razor-sharp kiridashi to cut hose when you can’t feel your hands can result in after-bleeds.