“The great thing about having potential is: if you never live up to it, you’ll always have it.”

When I see something I can make something out of, I get a flash of excitement, imagining all the cool things I could make. Usually, reality sets in shortly afterward, but it’s great while it lasts. 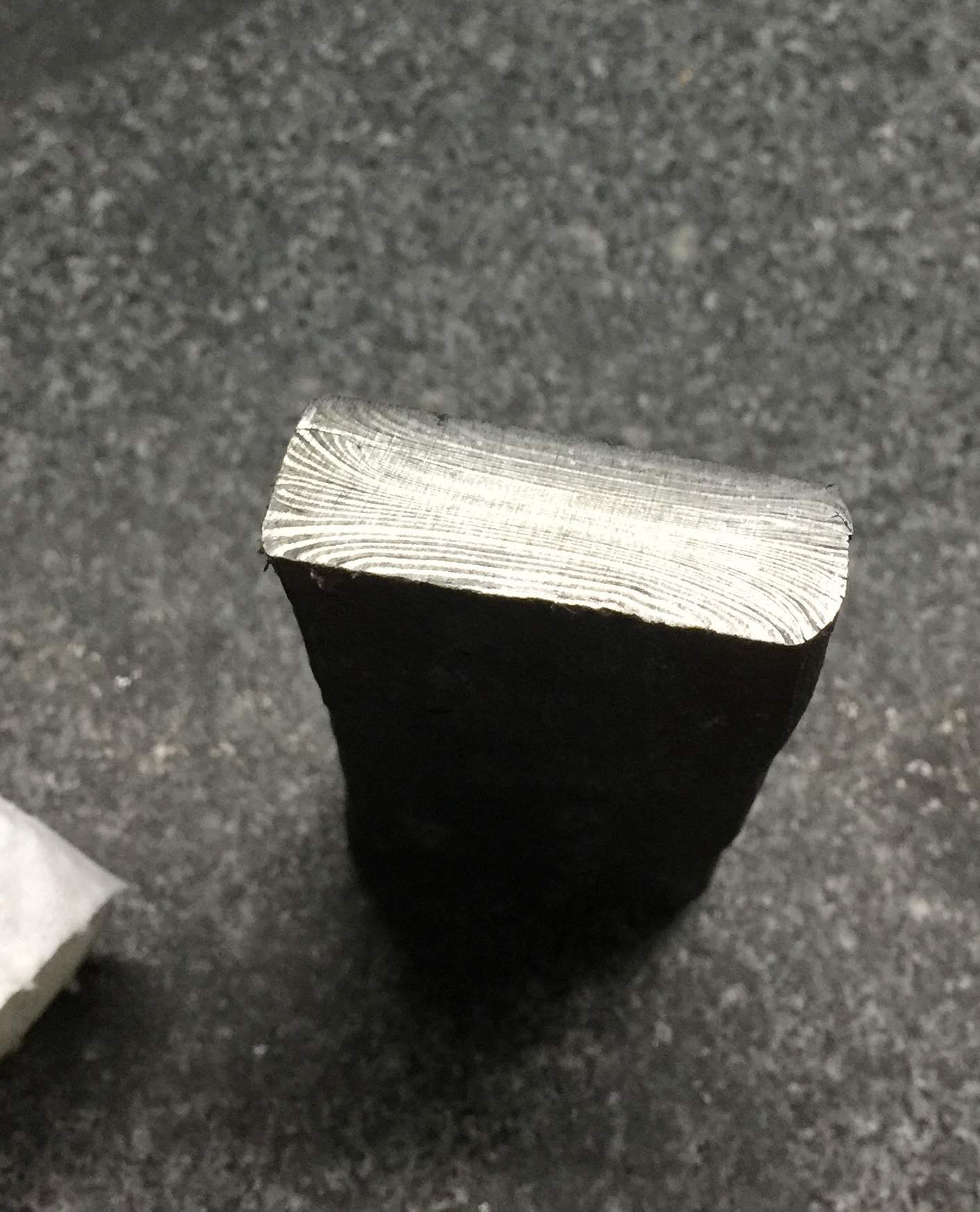 That little darling represents a whole lot of work; its assembly has been an ongoing project for several weeks, now.

First, I took a 4 bars of victorian wrought iron from my precious supply of vintage metal. Then I used the bandsaw to cut some appropriately-sized chunks of 1/4″ 1095 high carbon steel. Then, I finished re-working my respirator because the wrought iron is covered in lead paint, and I spent maybe an hour grinding the surfaces free of mill-scale (on the 1095) and paint and corrosion on the wrought iron. After that, I can use my mig welder to hold it all together so it’ll survive in the furnace long enough to get to welding temperature. 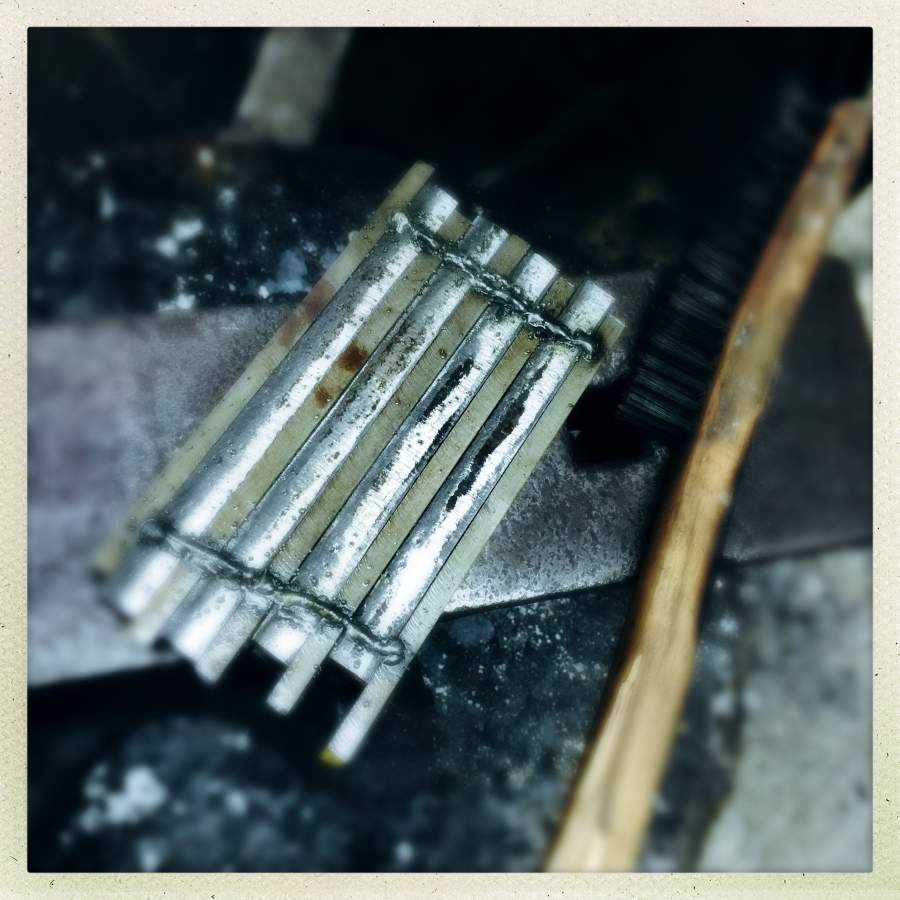 More experienced knife-makers told me I’m nuts to experiment with wrought iron and monosteel laminates, but I love how it looks so I’m going to keep trying. Besides, part of the process is doing things the hard way, deliberately.

You usually end up trimming the ends of a block, so it’s not necessary to clean them up; that stuff will get bandsawed off and added to my collection of goobies. I’ll also (eventually) grind out the material from the mig welds.

From there, it’s into the furnace for a 15-minute soak in 2300F burning propane. Wrought iron is particularly difficult to work with because it gets crumbly at anything below welding temperature. The whole time you’re working with the stuff you need to keep it screaming hot; that just adds to the challenge.

I usually don’t have good pictures of the process of drawing out the bar, because, really, do you want me messing with my iPhone with one hand, holding a bar of yellow-hot steel with the other, and operating the press with my third hand? Fortunately, the press  has a foot pedal, too. Usually, I don’t use the foot pedal because it puts my leg in the fall-path of a yellow hot steel bar, should one happen to get dropped. 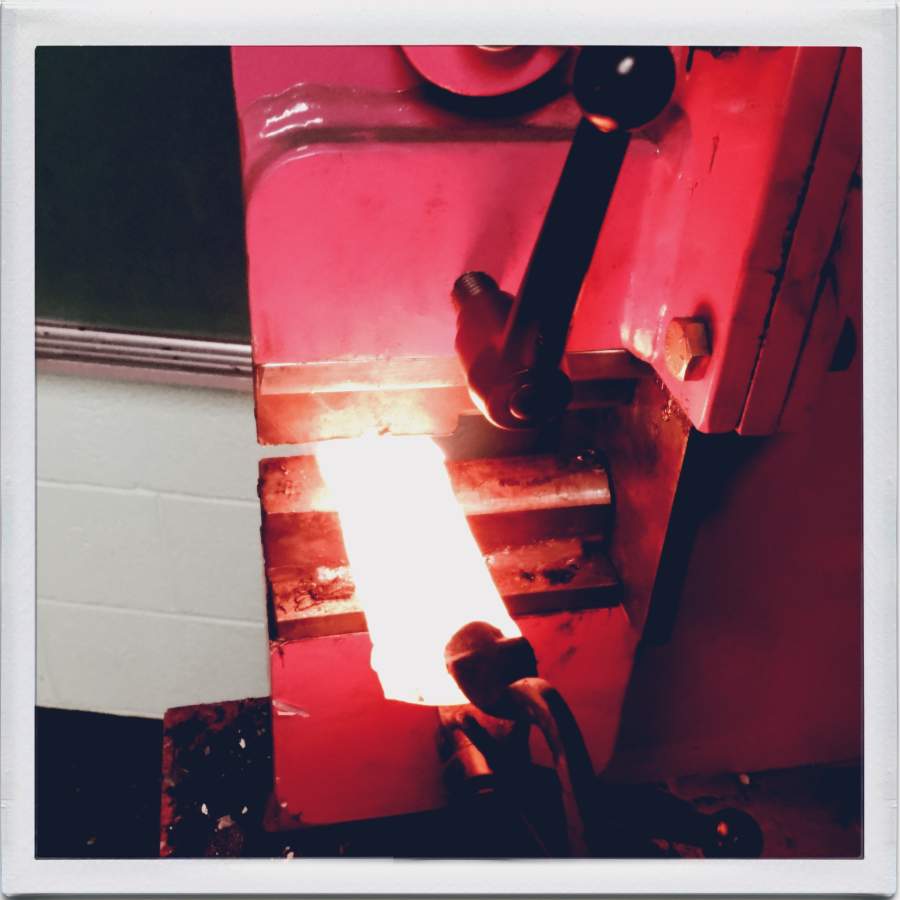 I’m not much of a hammerer; I don’t do all my welding (obviously) with a mallet like some do. I believe heavy effort is what hydraulics are for (thank you, Archimedes!) but the day after one of these sessions, my hands and arms ache something awful. Why? Because I am gripping those tongs together like I’m holding on to a door and the Titanic just sank out from underneath me.

The photo above gives a good view of the press’ die. That’s the swappable jaws of the thing; it can hold a variety of shapes formed from tough S7 steel (the levers are the screws that control releasing the dies) I have a couple of dies including some that are just flat/square and others that are mostly round. The round part is used to swage the metal – to push it in both directions away from the center. The flats are used to squish it and shape it. This combo die is pretty nice, though it’s a bit tight and tends to constrain me to 2″ width bars. So, to form a bar, you alternate between using the rounded edge to stretch the metal or the square edge to flatten and form it. I actually do almost all of my work with the square end, since even the square end stretches the metal when it presses down. You just walk down the bar, smoosh, smoosh, smoosh, smoosh, smoosh. Then you re-heat it, turn the bar over and do it again. Sometimes you do the smoosh on the edges by holding the bar upright, and sometimes it gets a bit curved so you put it on the anvil and correct it with the hammer, thunk thunk thunk. Hot steel does not make a “bang” noise when you hammer it, it makes a “thunk” noise like hitting clay. In fact if you have any experience with pottery clay or plastecine clay while it’s at the “stiff and reluctant” stage, that’s about what yellow hot steel feels like to work.

It takes about 6 passes through the oven and press to smoosh the block out into a bar. 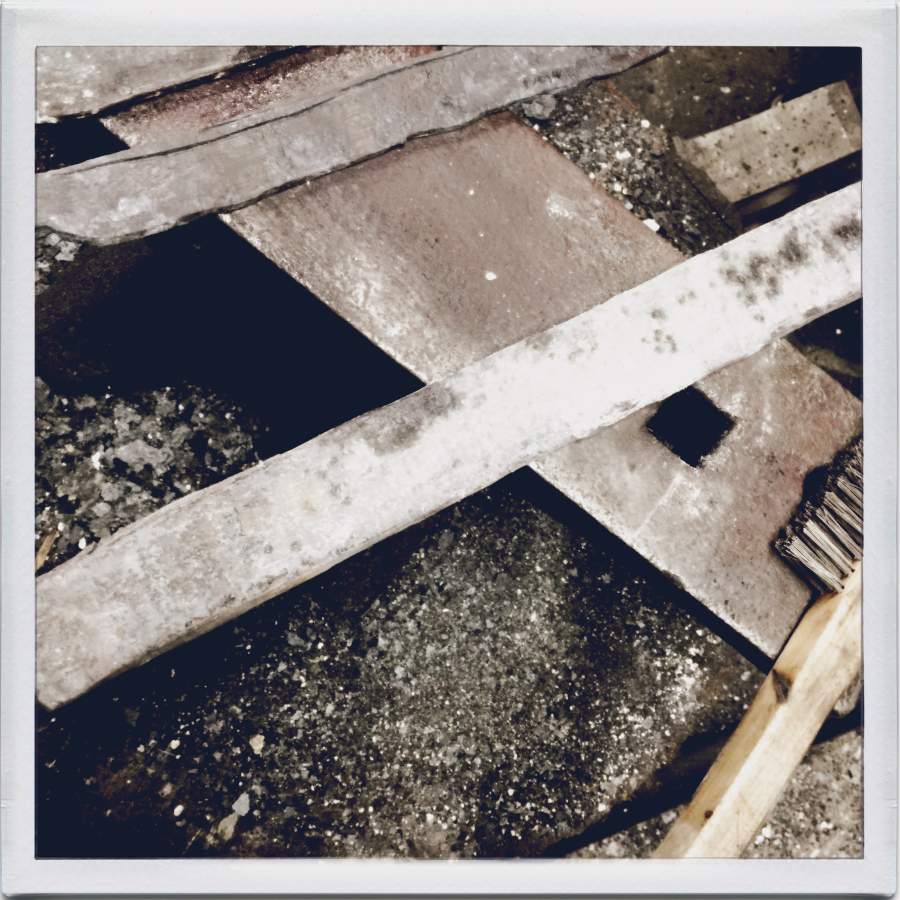 Once that’s done, you stick the bar into the annealing tub (a 25 gal garbage can full of pearlite) and put the lid on, and let it cool down overnight for the next day.

The next day, you brush it off, look for cracks and trim the ends off with the bandsaw, measure the length, and decide how many pieces to cut it into. The first pass of this bar was 9 layers of steel, which produced a bar that I cut into 8 pieces – the bar resulting from that would be 72 layers. Not enough!

The bar’s surface gets cleaned up of scale and oxides with a mix of angle grinders carrying grinding wheels and angle grinders carrying flap wheels, which is a nasty process that takes about an hour and a half for a bar that big. Then, it’s over to the bandsaw to cut it in pieces again, mig weld them into a stack, and it’s ready for another run through the furnace!

Stage two of cutting and stacking resulted in 6 pieces, so the bar came out at 432 layers. That’s the piece you see in cross-section at the top of this posting. I don’t know about you, but I find it fascinating and weird that I can build complexity into a piece of metal this way. It’s doing what I want it to do, but it’s a dialogue between me, my tools, and the steel – a dialogue mostly consisting of curse-words.

Now, I have 4 pieces like the one at the top, and the next pass is to turn them into something that I can try to turn into a knife. I think I will attack it by working on the pieces as pairs, so that big stack will result in two pairs of small bars that will get turned into stock for a blade. Each pair will probably work out to be enough metal for two blades so – if I am skillful and don’t screw up, I’ll get 4 blades out of that great big stack of wrought iron and 1095.

Here’s how the next stage will probably work: I’ll clean the surfaces of the bar and then I’ll cut a piece of 1/4″ thick 1095, which I will sandwich between them. So the resulting bar from that weld-up will be 432 layers on one side, a single solid monosteel core of 1095, and 432 layers on the other side. Then, my project will be to shape that into blade-shapes where I can place the core at the edge of the blade and from there it’s a simple matter of hours of grinding, quenching the blade and hoping it does not blow apart, followed by hours more grinding and shaping and polishing and sharpening and then putting a handle on it and asking the world “what do I do with this thing, now?”

I may see if I can get some thin 15N20 stock and put a thin layer of 15N20 on either side of the central 1095 bar. That would look really spiffy. But it might be too dramatic. Another possibility is to take a sheet of pure nickel and sandwich the 1095 with that. The nickel welds pretty well and sort of melts into the surface of wrought iron, so it makes for some very beautiful and dramatic patterning.

By the way, the more dramatic you get with the layout of your bar, the more obvious it is if you make any mistakes in your grinding. Life’s that way.

When you look at the top bar, you may notice welds that didn’t take along the edges. That stuff is OK; the edges inevitably get ground off during the forming of a blade. In fact, this illustration may help:

A lot of the drama in the metal gets exposed automatically as you shape it. As Michael Bell says “the blade reveals its nature as you work on it.” That’s a great way of explaining it; you slowly come to know each piece and its unique fingerprint.

Another trend, which I am probably going to have to experiment with someday, is to make the bar square-shaped, then cut it into shorter pieces and assemble them edge-up as tiles in a mosaic. For example, I could take that bar (if it were square) and arrange the pieces in a herringbone pattern. It’d look like something. The more you do that sort of fancy welding the more metal you waste, the more time you spend, the greater the chance of making a mistake. That’s one reason the big-name professionals go out of their way to do these complex weld-ups: it shows their skill. I don’t think it makes much difference to the quality of the blade, but you can stare in awe at the amount of effort that went into it.

On the picture above, see the spot in the upper left hand corner, where the line at the edge is visible? That’s a spot where the weld didn’t take. It’s OK because it’ll probably be ground out, but if I screw up and place that spot on or near the edge of the knife, the knife goes on the Shelf of Shame and Glory.