Sometimes, you start working on a project, and it just gets away from you. When that happens, it goes on the Shelf of Shame and Glory, or you otherwise get it out of your sight.

But what to do when it’s close to OK. It’s not good enough to fine-finish but it’s good enough to cut vegetables? Do you get rid of it, or do you finish it? Then, there’s the other question: how do you give a friend something that you know is not very good. I.e.:

Hey, Bud, this is a good slicer you can cook with but it’s got aesthetic problems so it’s not good enough for someone else but I think it’s probably just in the target-zone for how I feel about you.

See what I mean? That’s how the Shelf of Shame gets its denizens. One time, I had a knife that was close but I somehow ground it so that the blade was twisted after I had quenched it. So picture this: you have 12″ of what’s basically a spring – now: straighten it. You can’t! It’s a spring! Banished to The Shelf.

This is what I mean: 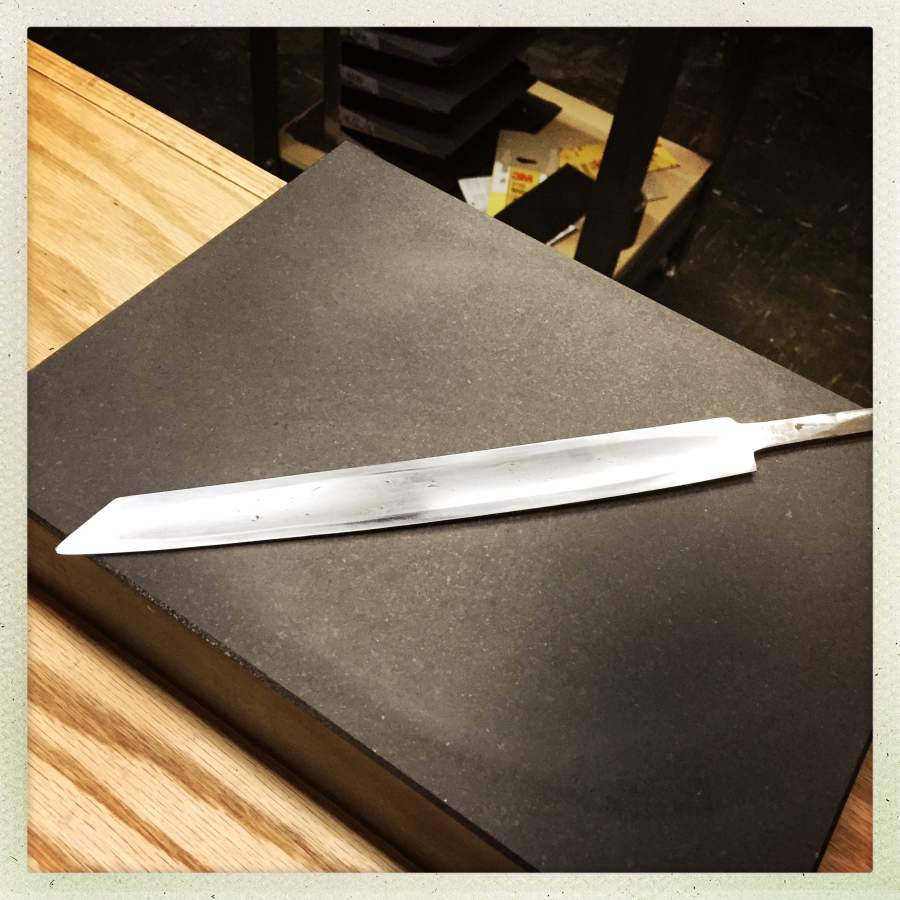 The rear of the edge is significantly higher than the front. The whole thing is skewed. Other than that, it would have made a super cool knife! In fact, I was thrilled by it – it’s a composite blade – the cutting edge side is 1095 and the opposite bevel side is cable damascus. Then, I ground a great big fuller right through the 1095 side and into the cable damascus. It was light, thin, flexible, and it was going to make a heck of a slicer, except for the one little thing: it wouldn’t slice straight and a non-expert wouldn’t be able to sharpen it.

I put some fruitless effort into correcting it by grinding but it was just too far out of whack. 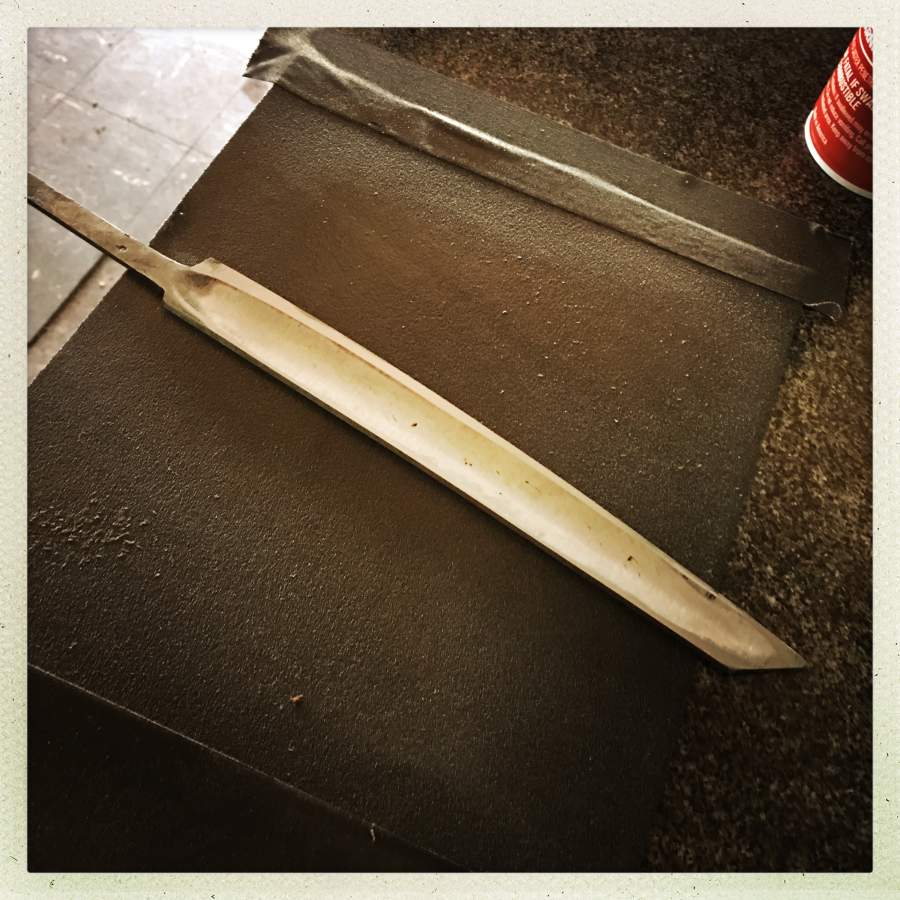 Unrelated but interesting, for those of you who are not familiar with these things: the blade is pictured on a surface plate. Surface plates are something I have become a bit obsessed with – it’s a machinist’s reference surface, nearly perfectly flat. Basically, you take a gigantic slab of granite and use two other similar pieces and grind them together in sequence, and you wind up with something nearly perfectly flat – flat to 100,000ths or millionths of an inch. Then, you can assemble machinery on that surface and it will be on a common plane. Some surface plates are 20 by 10 feet and weigh many tons; it’s what you assemble a CNC machine on, in fact! It’s weird to think of a block of granite a a precision tool but that’s what it is – and I’m sure that any machinist who sees sandpaper taped to a surface plate‘s soul is going to die a little bit. [This is only a B-grade plate I got used on Ebay] The truth is that CNC machines and lasers have made them mostly obsolete; CNC machines are so accurate a human can’t be arsed to check up on them, which means you can get some great deals on surface plates on Ebay. My good plate, which I use for scribing edge-lines, is 18″ x 24″ and 3″ thick; it sits on its own welded steel stand. A block of granite that size weighs 250lb and it’s surprisingly small for something so heavy. The trucker who delivered it, freight, tried to shove it with his foot and went, “what the hell!?”

Anyhow, the use of a surface plate is you can take a knife you’re grinding, put it on the plate, and see where it’s high or low. If it’s perfectly flat, the vacuum between the stone and the metal will make it feel sticky. They are cool and beautiful and smooth and they are also perfect for photographing knives on. 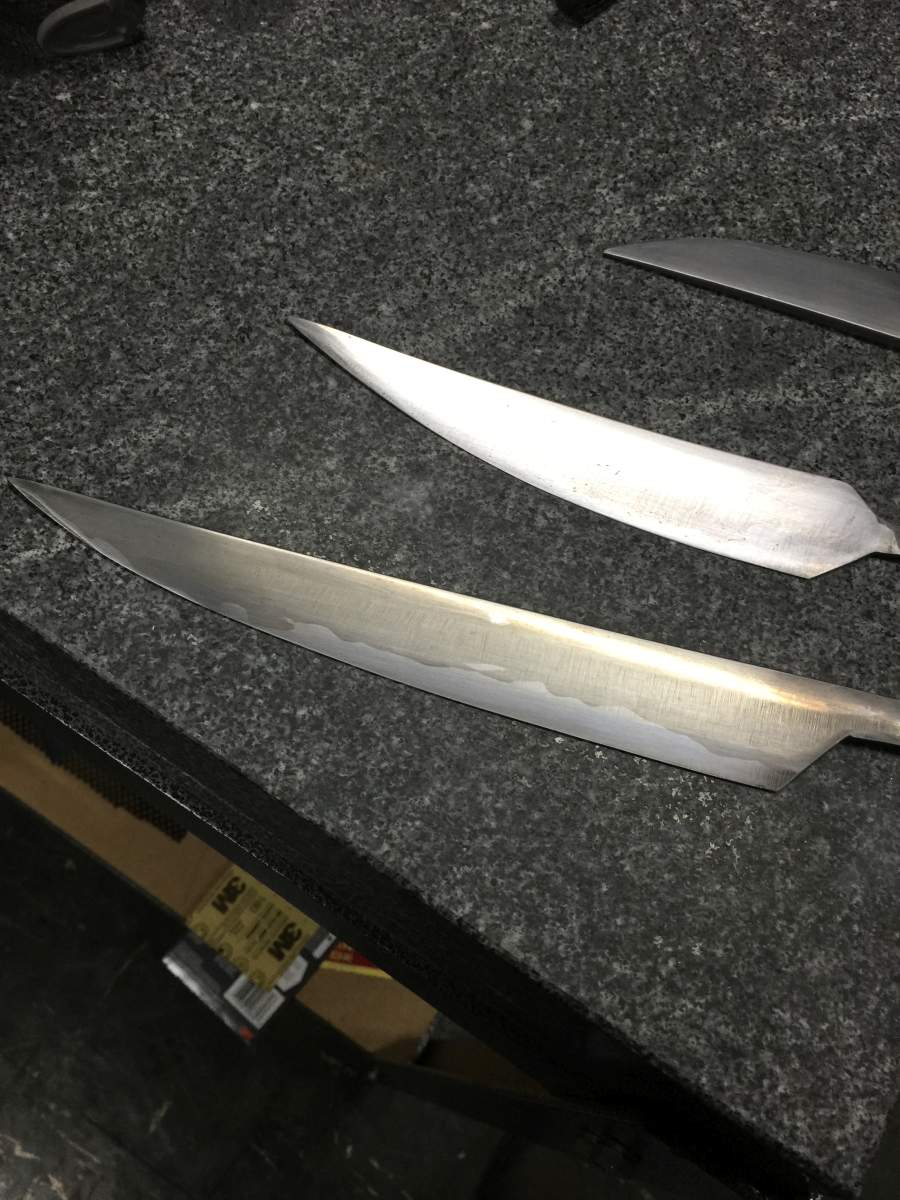 Those are the three problem children I am dealing with right now. The bottom one is the one that really hurts. I’m very happy with the grind and lines and it’s sharp and the edge is straight and it’s light and strong. Unfortunately, I made it out of 3 layers of steel: 1095, 15N20, 1095 – the wavy line on the edge is not a temper-line (“Hamon”) it’s where the 15N20 is sticking out. 15N20 is shiny stuff with lots of chrome in it, and it takes a great edge and shines up beautifully. The problem is, when you do a layered blade, you have to get the edge-line right along the layer, or the edge is offset. Then, as you grind it, you’ll “chase” the edge and warp the knife. I didn’t do that, so on this knife the edge is off by maybe 2/1000ths. The other side has 15N20 at the tip, and this side has it in the middle: 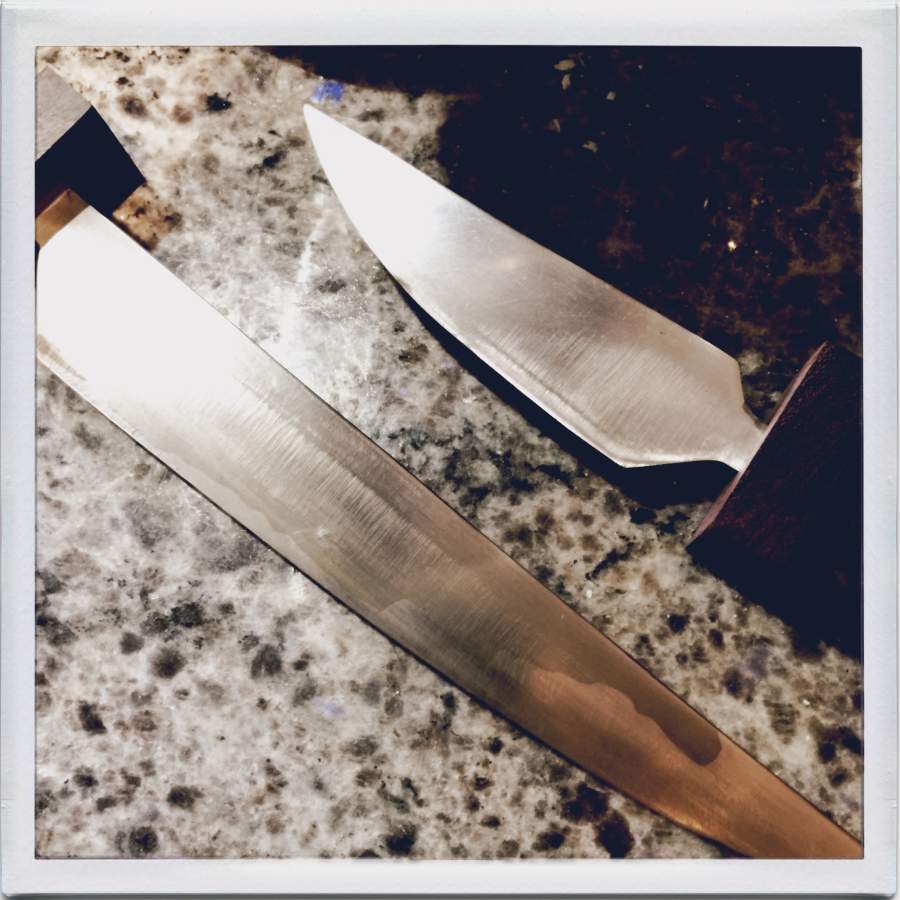 The answer is: “be more careful, next time.”

On the other hand, it’s a perfectly good knife. I’m going to put a handle on it and see how it turns out and then I will think about a home for it. I know people who won’t care that it’s an aesthetic disaster because it cuts fine.

The other two problem children have similar issues.. The small one at the top has the cutting edge so offset that it hangs in the middle of the blade and doesn’t even reach the edge. Ironically, 1095 makes a slightly better edge than 15N20, so it’s probably a better knife in that sense but it’s not what I wanted. So I’ll put a handle on it (walnut with some purpleheart caps) and someone will maybe use it to sharpen pencils or something. The one in the middle is cable damascus/15N20/cable damascus and it’s actually pretty good, but the edge is slightly off. I know someone who’ll enjoy having that, I think, but I’m mad that I got that edge slightly off. 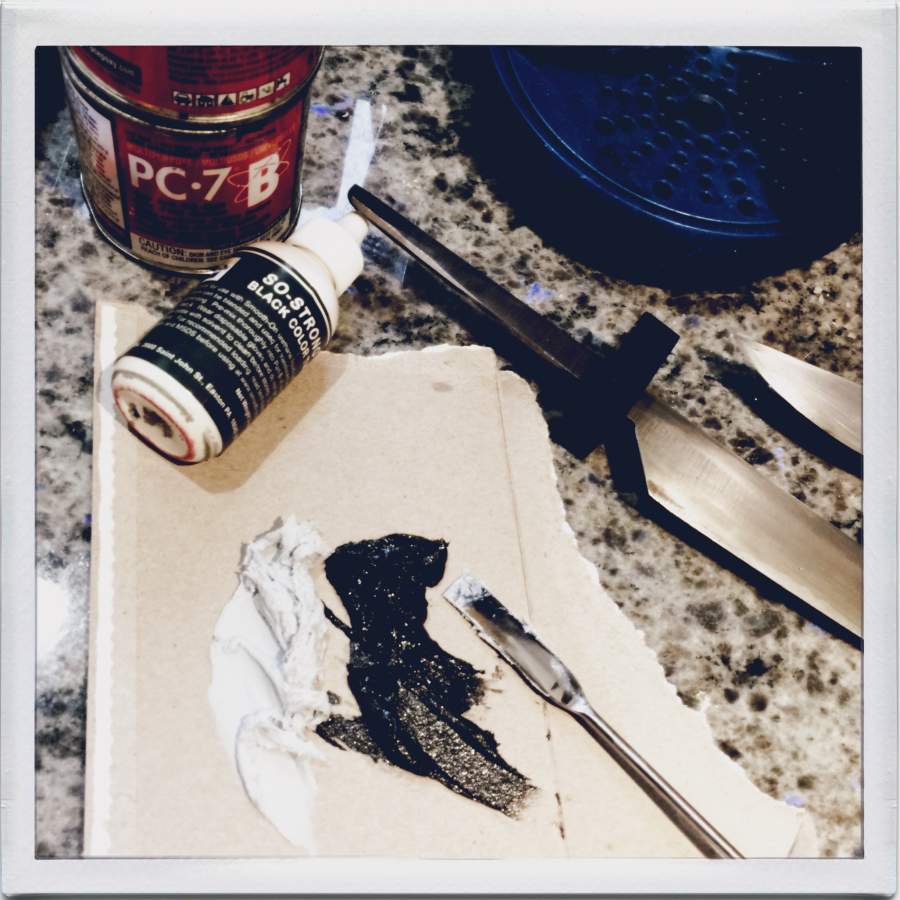 The throat-piece on the knife is a block of ebony, which I cut to fit the steel through. That’s a lot of work with a jeweler’s saw and little files. I was 3/4 of the way through when I thought, “this is a precision task! The kind of thing a milling machine was made for!” I’ve got a couple 3mm carbide cutters coming, and when they get here I’ll be able to cut the time required for that inletting process down to 1/10 of what it was – and best of all, it’ll be way more accurate. Speaking of accuracy: I now have to make sure not only that the inlet for the tang is accurate, I have to make sure the tang is straight and slightly tapered. One nice thing about this process is that I control everything. One awful thing about this process is that I have to get everything right.

Also pictured is one of my favorite tools: stainless steel dentist’s spatula. They are the best thing for mixing and spreading epoxy. That’s not surprising because that’s what dentists designed them for.

PC7 epoxy, which is what I use to mount my handles, is a sort of industrial gray. Since the throat-piece is ebony, I added a drop of resin pigment to the epoxy and suddenly it was ebony black.

Epoxies, urethanes, and acrylics are a subject of endless debate among knife-makers. My opinion is this: test. Test for strength and ease of use, then test for age. I have made knifes with PC7 since the late 1970s and I know it ages well. When I read knifemaker forums and someone is talking about “gorilla glue” (foaming urethane) I cringe, because that stuff is hydrophilic and decomposes in water – just about exactly the wrong stuff for a cooking knife. Again, on the theme of “ugly” – I’d rather have a knife with ugly glue than a knife that falls apart. I’ve designed my assembly process/system so that doesn’t happen and if your work has glue-lines it’s because you’re using too much glue and your surfaces don’t mate precisely. Did I mention surface plates? That’s how you get a surface to mate precisely. Besides, it gives me an excuse to have more surface plates than I really need.

Do you know a curler that you want to troll? Put a handle on a surface plate.

I have a buddy who builds model armored vehicles and I sent him a surface plate for christmas. Some of the plates you can get on Ebay for $45 will fit into a flat-rate shipping box which is all kinds of fun when you have USPS deliver a 35-lb chunk of granite cross-country for $13. If I had an depleted uranium I’d probably mail that in a flat-rate box, too, except it’s a hazardous material that would herald the arrival of inquisitive FBI agents.

I am thinking of doing an auction for a knife, all proceeds to go toward the FTB Legal Defense Fund. I don’t feel like I can sell these problem children because they’re not quite good enough, but that might be a way to find them a home. Or maybe I’ll wait until there’s something more worthwhile. There’s also the problem of how to execute an auction: do I just say “email me your gofund me receipts and the highest gets the knife” or do I do it on Ebay and collect the money via Paypal and then donate it? I feel like in honor of my complaining about capitalism, I should try to not create a market for the darned things.