Darn this tinfoil chin-strap, it’s hard to keep everything in position. Okay, I think I’ve got it. Ready?

The dominant parties that run the US have a long history of vote suppression; it’s so bad that I refer to the US as a “pseudo-democracy.” Both parties have participated in various voter disenfranchisement scams, ranging from flat-out “no, you don’t get a vote, slave” to more complicated maneuvers such as annexing Puerto Rico as a territory but not giving citizens on the island a vote (because: brown). The electoral college was another voter suppression technique – basically completely mooting the popular vote and leaving the real decision-making power in a committee of plutocrats. [stderr] There’s suppression going on everywhere in the US political system: the ‘Justice’ system rotates people through, strips them of their franchise* – and has taken over 6 million voters off the rolls. In Florida, 1 in 5 voters has been disenfranchised. You can hardly look at any part of the US political system where voting takes place, and not see fingerprints of suppression all over it. It’s so bad that people from both parties openly talk about suppression but do nothing because they intend to use it if they’re able to gain the power.

I believe those are established facts.

Computer security practitioners have been worried about the security of election machines since the 1960s. My colleague Avi Rubin at Johns Hopkins has been hammering on flaws in Diebold voting machines since the late 1990s. If you’re curious, Avi’s analysis of one voting machine is that: they did everything wrong. The systems configurations are wrong, the cryptography is wrong, the software is wrong, it’s a litany of wrong, wrong, wrong. My opinion on Avi’s work has always been that it’s really good but it’s cautious; there are aspects to voting machines that I dislike less than he does – I tend to ask questions like “what happens if someone threatens someone who is operating the polling place?” That sort of thing has happened a lot in the US, and recently, too (the 1950s). 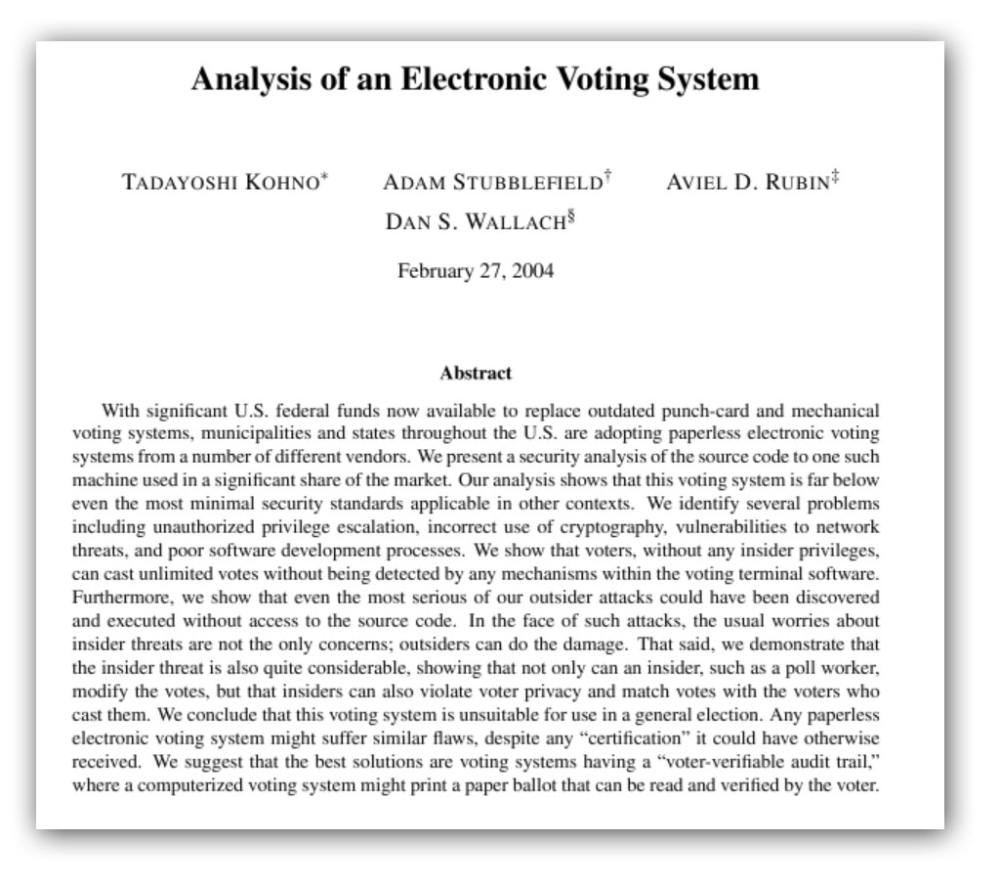 Every DEFCON I’ve gone to, lately, they’ve got electronic voting machines and people hack them to bits.

And now the big story is Russian hackers. That has been an ongoing problem since forever.

“The State’s posture in this litigation – and some of the testimony and evidence presented – indicated that the Defendants and State election officials had buried their heads in the sand.”

I think that they’re leaving the situation open so that they can cancel an election, if it doesn’t come out right. Or, they can take advantage of the flaws in the system to post a bunch more votes if they need to make sure the right person wins. That is the level of creeping political paranoia that I have reached. 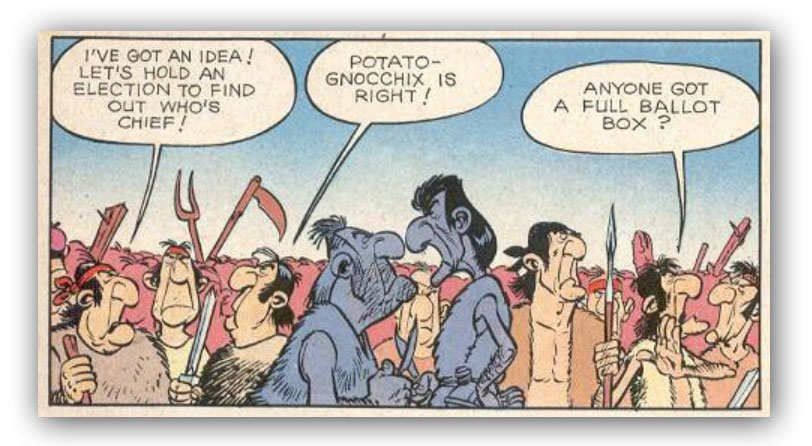 In Asterix in Corsica, there’s a running joke about Corsican elections: they have all the ballot boxes full with the votes before the election is held – it saves time – and the challengers don’t even bother looking at them; they just jump right to a knife-fight. We won’t be invited to participate in that, either.

In Season (?3?) of House of Cards, Frank Underwood pulls out a raft of tricks to steal an election, including declaring a fake state of emergency in order to close the polling-places in districts that he doesn’t want the votes collected from.

There is no other plausible reason for why the voting machines have been allowed to remain so bad. In a future election, we’ll see them invalidated “because of the Russians” and the Supreme Court will decide the election just like they did in Florida when they gave Bush the win. Russian hackers will be “Hanging chads 2.0” The Republicans are ‘all in’ to hang onto power and the Democrats are sabotaging their own candidates to prevent a socialist insurgency. Either party could find it convenient to toss a crucial state out and force a “mulligan.”

I think that they’re leaving the situation open so that they can cancel an election, if it doesn’t come out right.

[* You can strip someone of the ability to vote, but can you take away their right to vote?]

“A state voting commission is walking down a sidewalk and sees a banana and says ‘oh, no, Russians are going to hack us again!”

Good explanation of the House of Cards election-stealing scenario [vulture]:

Voter suppression comes into major play.
The fact that voter-ID laws might’ve prevented thousands of voters from hitting the polls in Wisconsin and elsewhere still haunts Hillary Clinton. In House of Cards, voter suppression becomes the reason Conway doesn’t end up president on Election Night. Underwood has Doug Stamper threaten the Ohio governor to go on national television and say he was pressured into closing his polls, and is now imposing a statewide voting suspension. This triggers a ripple effect of other states contesting the outcome of the election. At first, six states refuse to certify their votes. By the night’s end, almost all 50 states end up filing voter-suppression lawsuits. The whole time, of course, Underwood stalled in giving his concession speech. It’s a total clusterfuck that leaves Conway literally speechless – his wife is the one required by protocol to break the news to the country that her husband cannot legally be declared the winner – and the Underwoods are more pleased with themselves than ever.

I Get A Box » « They Were Already Unrestrained