System administration is one of those skills you sometimes wish you didn’t have.

I’ve been responsible for managing a variety of systems, more or less continually, since 1981. Let’s just say that thrill of having “root” has worn off – nowadays I just want to get things done. That’s what’s been occupying my last few days (along with having a big sheet of stainless steel delivered!) – it’s detail-fiddly stuff and it’s inherently annoying to me because there is a complete lack of grand architecture to anything on the internet. This has been an ongoing problem since the 80s, too, but it’s gotten dramatically worse thanks to search engines.

What do I mean?

You might want to change the font on page titles in WordPress, and it would seem like “change font in wordpress page title” would be a useful search. And, indeed, it returns a lot of stuff. The problem is that WordPress changes fairly often, so you’ve got 400,000 search results that are wrong because they are all about how to change fonts in page titles in WordPress circa 2005-2017. Sure, you can search by date, but that probably doesn’t help either. This is in addition to the standard Internet amount of wrongness. So, you have out-of-date information mixing with mis-informed postings, leavened with the occasional nugget from someone who knows what they are talking about, and toxic chunks of advice from people who figured out a really kludgy way to do it that will break on the next upgrade.

Oddly, figuring out how to do something on the internet has become a process of weeding out a gigantic number of equally credible ways not to do something. 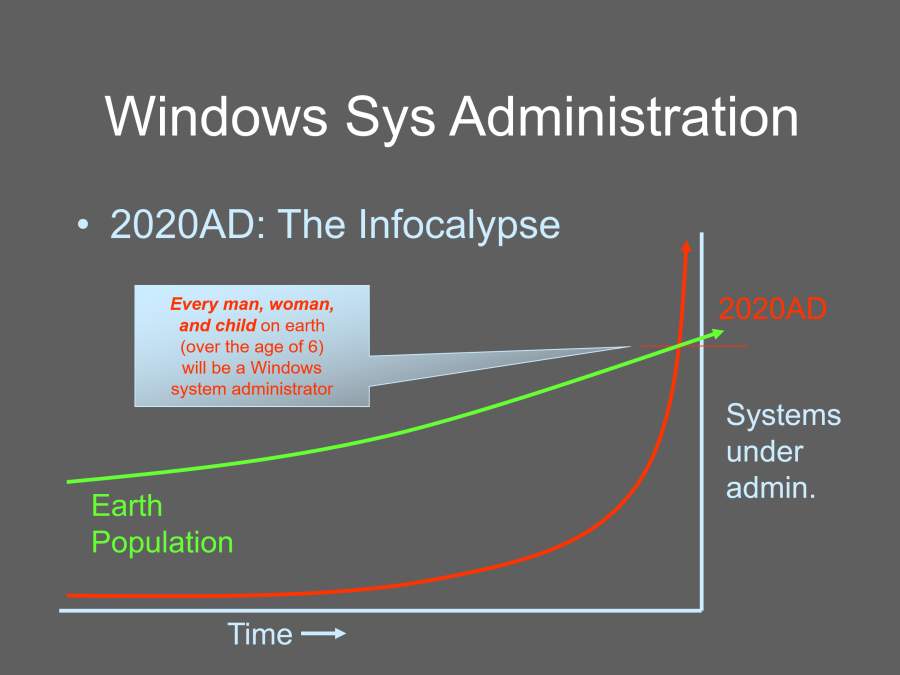 This seemed funny in 1996 when I wrote this slide. Now, not so funny.

This all comes back to a problem of maintaining customization. If you think of it, blogs such as this, or a WordPress Q&A site, is being customized and the meaning and intent of the customization is lost (in most cases) unless the custodian of the information is careful to somehow indicate that meta-information. In the case of an administration process, whatever it may be, you want a separation between the core system and the user’s customizations: in other words, you install WordPress and some templates and the blog postings and user’s settings should (ideally) be independent of WordPress itself. That way, you can upgrade WordPress on a different cycle from the postings and content. Sort of. Well, ideally, anyhow. As long as you rely only on the bare minimum of tightly-constrained system features, then it’ll work.

God help you if you want to change a font somewhere, and the font settings are contained in part of the stylesheet. Naturally, you might think “I will edit the stylesheet” but if the stylesheet is upgraded, your edits will be undone. That’s not a big problem – there are other places where you can add overriding style rules – but you have to know that and if you do an internet search for helpful answers, you’ll get answers from 2003 explaining how to do it wrong.

This is not in the form of a complaint, as much as an observation: system administration sucks. Why? Because it is at the tip of the mountain of complexity – complexity that software ‘engineers’ are cheerfully complexifying even more, as fast as they possibly can. One of the things I realized back in the early 90s was that computer security and system administration both have a common problem; it is impossible to ever ‘fix’ anything. Because the environment changes. Computers, which should be logical, and predictable, and more or less static in function, aren’t. That feature you depended on may vanish, or move. If your configuration file needs:

to set the encryption key, what happens when a programmer changes it (as part of a general re-assessment of configuration management for that system) so it should be:

instead? It’s necessary, for software to inevitably march on its progress to the singularity, that old things must change. And it is necessary that systems administrators keep updating things, endlessly. Software (and computer security systems that depend on correctly-functioning software) rots over time. This is sobering, to me, when I consider airframes that have flown safely since 1956 – still carrying passengers – and computer programmers talk about “uploading” into the cloud and living forever. Nonsense; they’d be deleted during a system upgrade because the old database wasn’t completely compatible and – oops.

The amount of human effort that is flushed down the toilet in terms of system administration, is truly horrific. These computers – these time-saving devices – are perhaps the greatest time-wasters ever created.

As you may have inferred, I am setting up WordPress today. The last time I set up WordPress was 2 years ago when I did the Fuel Rats’ site. It’s not bad, in fact, it’s pretty easy. But lots of little stuff changes with every release, so by the time you’re doing it again after 2 years’ vacation, enough things are different that you have to hunt down change-related breakage. We can’t ask everything to remain unchanging, but damn it, I wish I didn’t have to re-learn 90% of everything, every time. I know that if I were a professional WordPress installer, I’d be up on all the changes and details and it’d all be a snap. But as an intermittent amateur, it just seems like endless pointless annoyance.

James Mickens helps explain how horrible system administration and security are: “most of our hard work is immediately useless“…  It’s true!