Reporting “truth” is a trickier problem than we might think. [stderr] Our interpretations are subtly, or unsubtly, adjusted by the reporters’ selection of words.

But that’s only part of it. As Howard Zinn points out, the truth in history is as much a matter of what you leave out as what you put in. So, what about entire stories that are left out? The New York Times has recently begun a massive marketing campaign revolving around the idea of “Truth.” 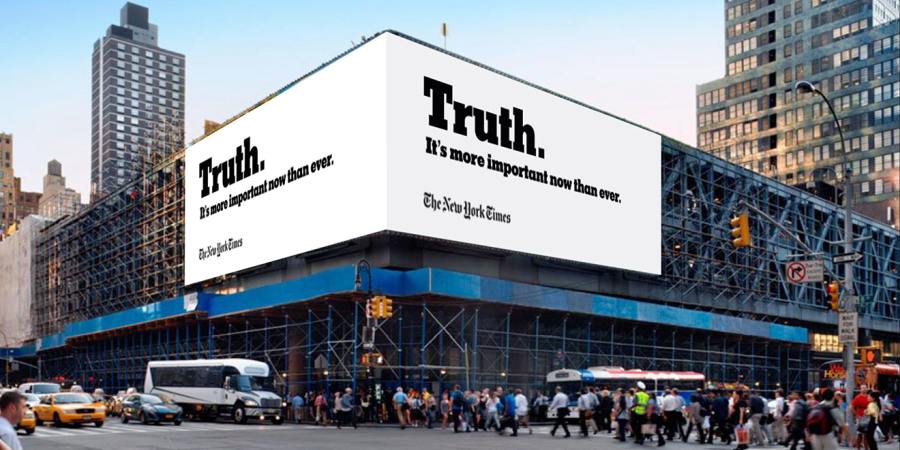 Regarding its treatment of America’s nuclear arsenal [stderr] The New York Times is credulous and unquestioningly spreads a highly distorted view of nuclear policy – that’s a nice way of saying “lies.” I’m willing to accept a plea of ignorance on the part of the reporter (which would also say something pretty nasty about The New York Times) but that stretches credulity; it takes only a small amount of research and thought to realize that the US Military is lying about the nuclear “upgrade.” If you were able to read and understand my explanation of what’s going on, we should be able to expect a journalist from a newspaper with the standing of The New York Times to understand it as well. That’s why I say “they are lying” not “they are ignorant.” And, by the way, lying about nuclear weapons policy is really not nice; nuclear weapons are one of the supremely important matters of public interest.

Keep this all in the context of the “Russia interfering with US election” story; at various times various agencies have claimed that they didn’t say anything about what was going on, because they were afraid it would negatively affect someone or other during the 2016 election. When we think through the time-lines of who said what and when and what effect it had, I think it’s fairly clear that James Comey’s various comments about Hillary Clinton’s emails had a political effect. We can allow Comey and various pundits to argue about what that effect was, but by choosing to say what he said, and when, it made some difference. And The New York Times has pointed that out. [nyt] i.e.:

Mr. Comey made a fateful decision in October 2016, when he was the F.B.I. director. In a letter that was immediately made public (you can read it here), he told Congress the agency was reopening an investigation into Hillary Clinton’s emails. 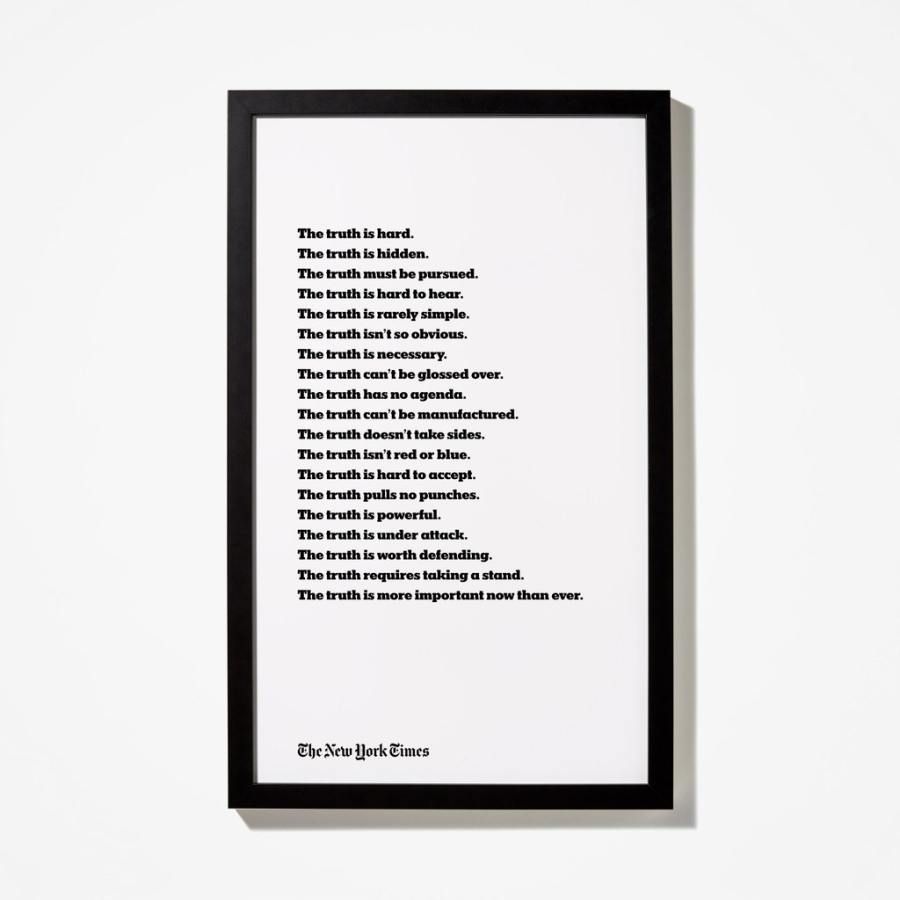 One of the NYT’s new ads. Its very truthy.

What if I told you that The New York Times has a lengthy history of adjusting the stories it chooses to report on, for political effect?

It’s obvious; they do. The New York Times reported on the My Lai massacre – a little four paragraph mention, heavily sanitized, on page 14 – it didn’t start reporting on it as what it was, until Sy Hersh broke the story in Dispatch News Service – and then it was front page news at The New York Times. [wp] All of that was in November, 1969: midterm elections. When you start digging into the history of The New York Times selective editing of history, elections are one of the primary reasons. But there’s always an election coming up, or just finishing; there’s always an excuse.

That’s something that anyone who follows the news should suspect, somewhere between subconscious and painful awareness. For me, it surfaced in my awareness while I was tracking the illegal government surveillance stories. Working with spooks, as I have, and in computer security, as I do, one hears of these things – listening posts, fiber taps, backdoors in encryption. And sometimes there’s news about them, confirming those murmurs, and we believe that the newspapers are reporting the truth.

A different truth starts to creep up on you when you discover the degree to which an important newspaper like The New York Times is willing to kill stories in order to make the government happy. James Risen, the Pulitzer Prize-winning journalist who covered the CIA’s “black sites” in Thailand, and who broke elements of the NSA’s warrantless wiretapping program, describes his experience in a piece at The Intercept [in]

After the 9/11 attacks, the Bush administration began asking the press to kill stories more frequently. They did it so often that I became convinced the administration was invoking national security to quash stories that were merely politically embarrassing. In late 2002, for instance, I called the CIA for comment on a story about the existence of a secret CIA prison in Thailand that had just been created to house Al Qaeda detainees, including Abu Zubaydah. In response, Bush administration officials called the Times and got the paper to kill the story. I disagreed with the paper’s decision because I believed that the White House was just trying to cover up the fact that the CIA had begun to set up secret prisons. I finally reported the information a year later.

I suppose “late 2002” would have been midterm elections, but does that really matter? The truth is that The New York Times had this important story, of national interest, and sat on it for at least a year. That’s not serving the truth, that’s serving the government.

One of the few stories I managed to get on the front page cast doubt on reports that an Iraqi intelligence officer had met with 9/11 plotter Mohamed Atta in Prague before the attacks on New York and Washington. But Doug Frantz, then the investigations editor in New York, felt that he had to sneak it onto Page 1. “Given the atmosphere among the senior editors at The Times, I was concerned that the story would not make it to page 1 on a day when everyone was convened around the table,” Frantz emailed me recently. “So I decided that it was too important to appear inside the paper and went ahead and offered it on a Sunday; a day when the senior editors weren’t often involved in the discussion.”

Recall that, at that time, the Bush administration was trying to implicate Iraq in 9/11 so it could carry out its established plan to invade. Part of the story that was being promoted was that Iraq was involved in 9/11 – Risen’s story, in other words, was huge news. And he had to sneak it by on a day when the senior editors weren’t around to kill the story? Elsewhere Risen describes having reports of experienced intelligence analysts express doubts about the Iraq WMD story, and how he could not get those reports published; they’d sit in The New York Times output queue for weeks or months, then get chopped to pieces and dribbled out on page 14. This is politically important stuff – the US invasion of Iraq was not merely a crime against humanity and a national disaster, it was an expensive blunder. By choosing not to publish that information, isn’t The New York Times complicit in the disaster? Weren’t they hiding the truth; namely that Iraq had no weapons of mass destruction? People died because of that; in fact you can draw a direct line between the invasion of Iraq, and the rise of ISIS, which led to the destruction of Syria, which led to a refugee crisis.

Journalists like Duncan Campbell, who have reported on the surveillance state for a very long time, pointed toward the existence of ECHELON and other illegal proceedings. In 2002:

Lichtblau had heard from a source that something potentially illegal was going on at DOJ, that officials seemed to be ignoring the law requiring warrants for national security wiretaps, and that Attorney General John Ashcroft might be involved.

Lichtblau and I compared notes, and we realized we were probably hearing about the same story. We decided to work together.

By the fall of 2004, we had a draft of a story. I felt it was time to go through the front door, so I decided on impulse to try to bluff my way to the top of the NSA. I called the NSA’s press spokesperson, Judy Emmel, and told her I had to talk to Hayden immediately. I said it was urgent, and I couldn’t tell her what it was about.

We were operating against the backdrop of the 2004 presidential race between George W. Bush and John Kerry. With a week or two to go before the election, Lichtblau and I, along with Corbett and Taubman, went to New York for a meeting with Keller and Abramson to decide whether the story would be published.

Bill Keller was The New York Times executive editor. Apparently Bill Keller is one of the people who decides what The Truth is for America. They spiked the story.

Keller now also says that the overall climate in the country in 2004 provides important context for his decision not to run the story. In a 2013 interview with then-Times Public Editor Margaret Sullivan, he expanded on that, saying that “three years after 9/11, we, as a country, were still under the influence of that trauma, and we, as a newspaper, were not immune. It was not a kind of patriotic rapture. It was an acute sense that the world was a dangerous place.”

Risen eventually broke the story in 2006. 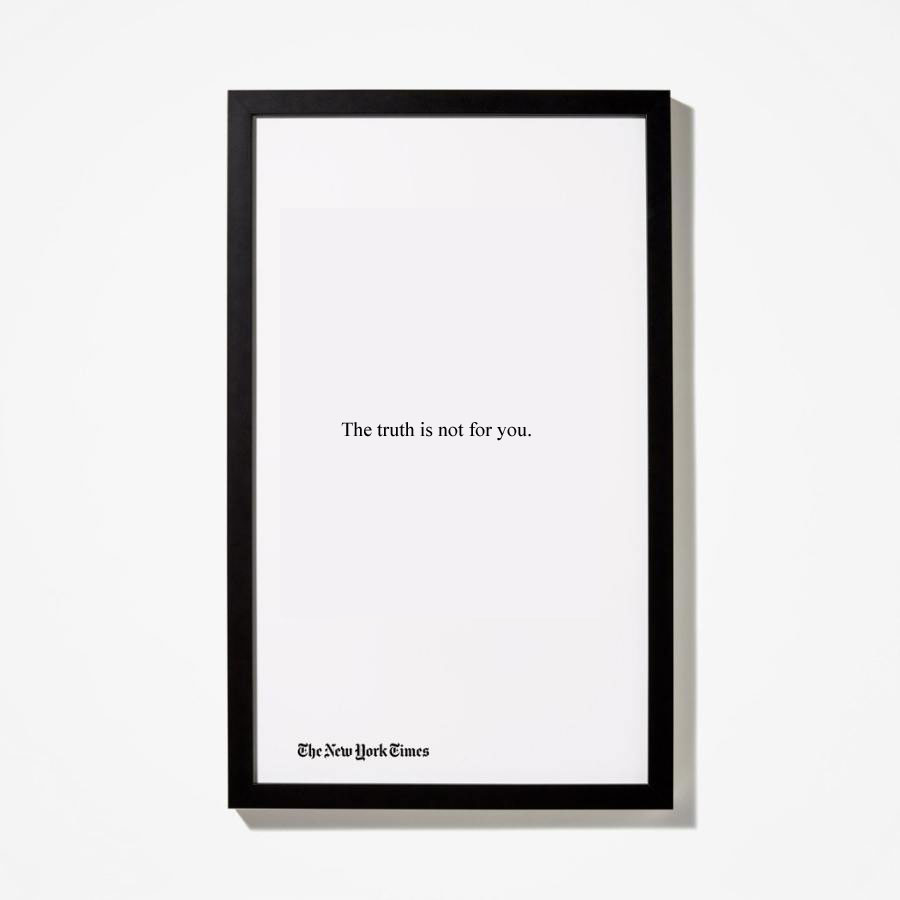 How dare they talk about The Truth.

The entire interview with James Risen is very interesting and is worth reading.

Over at Mano Singham’s there was some discussion about journalism, and I commented, “what is the price of a journalist’s soul? access.” Sure, Risen was able to collect some important information, that impacted the well-being of the republic – yet he was remarkably easy to silence, when it came down to it. Risen may have known the truth, but he didn’t serve it.

Uncommon Sense » « In the Metal