Some closeups of metal using a Canon MP-E 65mm macro lens. The depth of field of the lens is very shallow, and it’s a pain to hand-hold.

When I first got the lens, my master plan was to use it to do high-contrast black-and-white images of bugs, which I was then going to print out on film, and make contact wet-plate prints on glass. The whole process worked but it turned out that highly enlarged wet-plates of bugs just weren’t very interesting to me. I had a momentary thrill when I discovered that I could contact-print a wet-plate (using a halogen bulb in my medium format enlarger!) but the process was a great big nasty amount of work – and who really wants a digital-to-wet-plate? 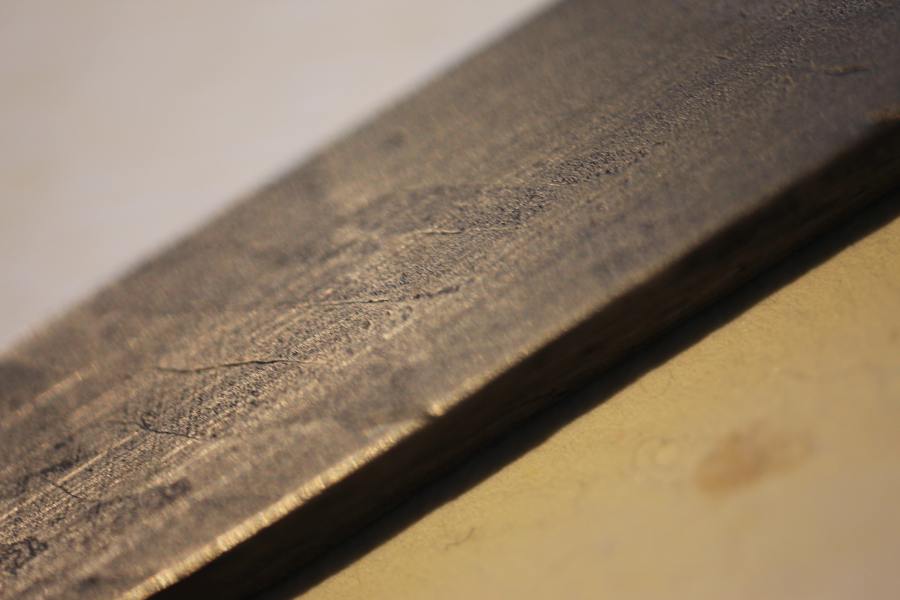 Closeup of wire rope damascus. You can see the outlines of the wires in the bar, but they are thoroughly welded. I guess that the coloration between the formerly separate pieces must be carbon.

That piece was etched in ferric chloride for about an hour, so its surface is not just the 1000-grit polish I did on it – but since the abrasion-lines are still there I guess it didn’t etch away a lot of material. 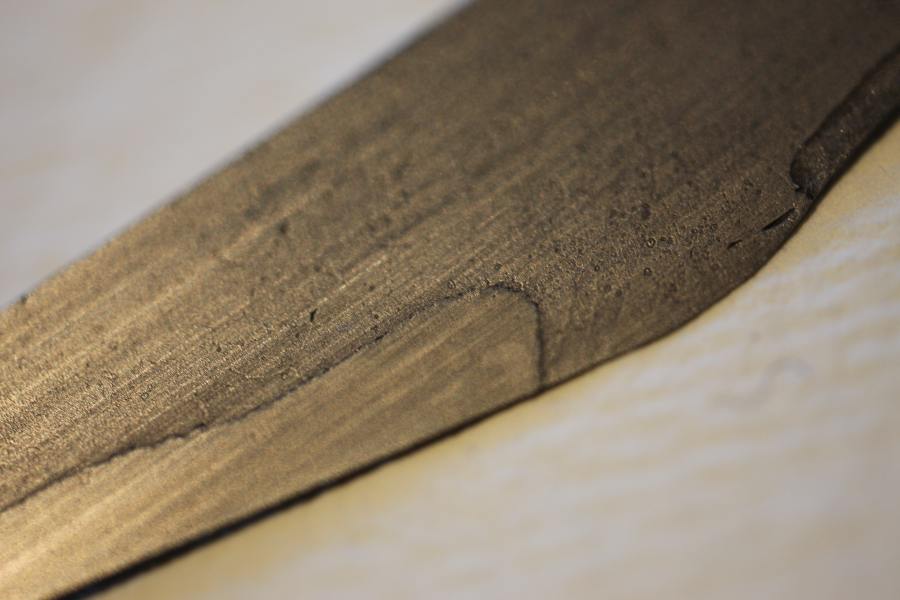 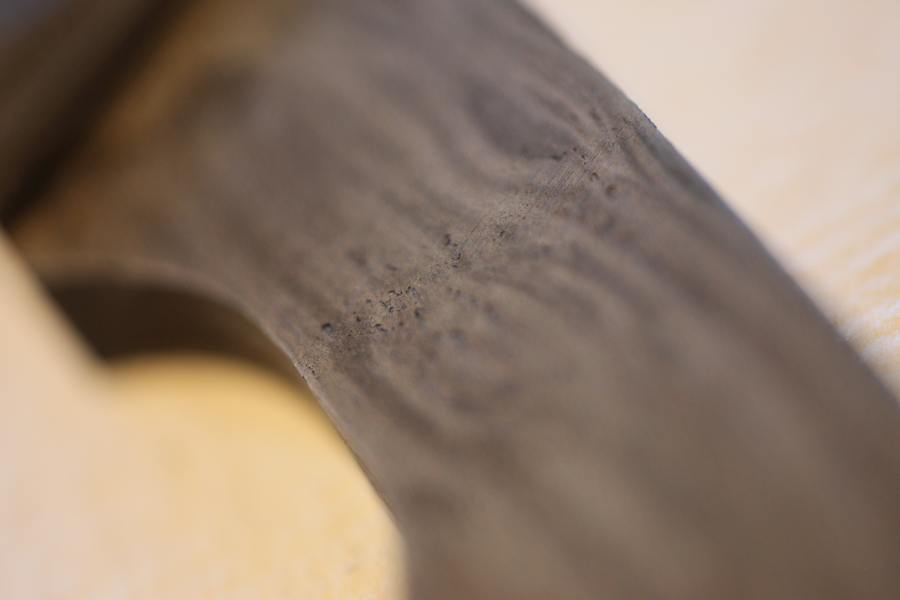 Wrought iron. The iron was polished and etched mildly.

Vintage wrought iron (“puddle iron”) like this has these ropy tendrils running through it in a very clear grain. I do not understand why/how that grain forms; it’s got to be similar to the dendritic formations in wootz/crucible steel but clearly it’s not the same at all.

Before I got started doing this stuff, I thought steel was pretty simple. It’s just metal. You take a couple bars and mash them together with some heat. Then you push that into the shape of a knife and dunk it in water. Ha, ha, ha, stupid Marcus.

The wrought iron piece is a closeup of an experiment that’s on my bench right now, a 2-layer (“ni mai”) piece of 1095 with a wrought iron facing. I have great hopes for this combination because it combines the aesthetic I want with the edge performance I need. I believe that this will make some strong, interesting-looking, wickedly sharp cooking knives. But I didn’t jump straight to trying to forge that sort of thing; I’m doing these little tests, first. It would be crushing if I spent a day shaping a cooking knife blade and it blows apart when I try to quench it. 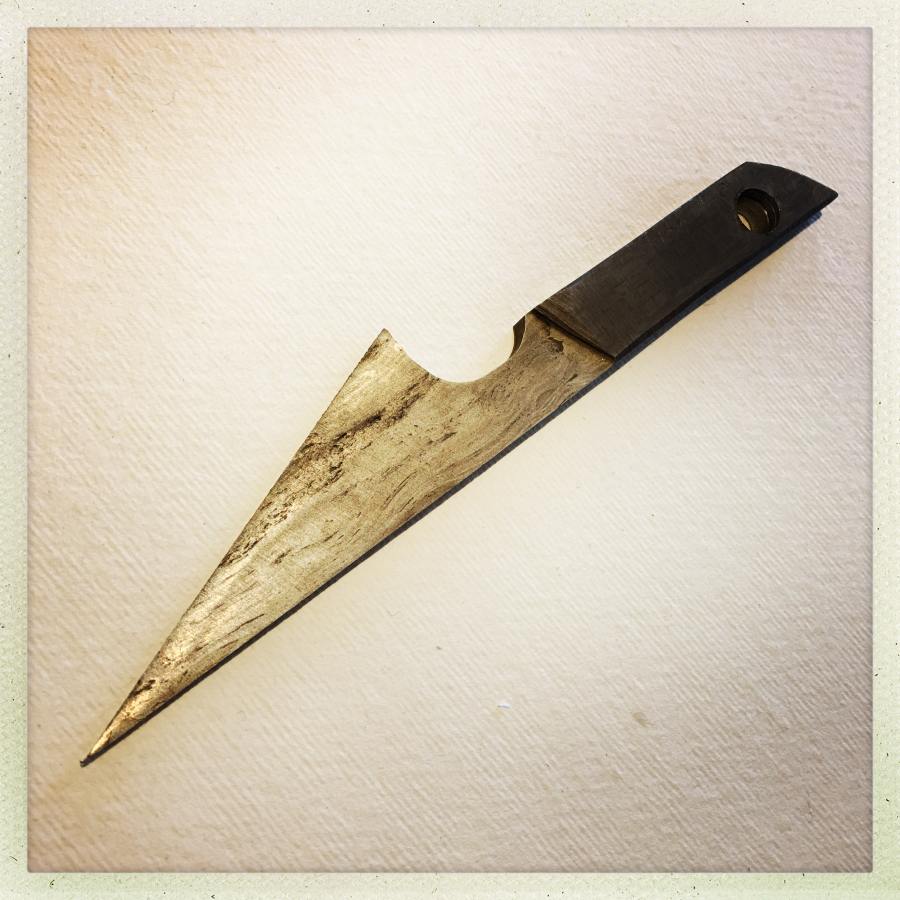 That’s a pretty small chunk of a larger bar, which I sectioned for testing. I squished down two pieces and made a pair of those things above. The first one I did by hammer-forging and cutting with a grinding wheel and grinders, the second one I did using the milling machine. It turns out that milling machines are great for machining stuff! Who’d’a thunk it!? The one above took about an hour to cut, profile, and grind to that shape. The one I did on the milling machine took 10 minutes and came out with a beautiful polish from the face mill, and absolutely parallel edges on the handle-oid part.

When I get home from LA they’re going into the fire for a quench and then I’ll finish grinding that bevel. Wrought iron is dreamy to grind and it won’t harden when I quench it. The question is whether the 1095 will harden with that great big thermal mass attached to it, or if it’ll warp or blow apart or what.

(This is just a test so I want the stress-points to be there. If it’s going to blow up, I want it to blow up before I start trying to make anything real using this combination)