We bought the farm in 2002, and moved up from the ‘far suburbs’ of Baltimore. The farm came with a bunch of stuff in mostly-workable condition: baler, rake, hay cutter/bind, and a 1974 Belarus MtZ572 tractor. We had horses to feed, so there was hay to cut, and the place had been going to seed for a decade – there was a great deal of bushhogging to be done, and the tractor came with a 10′ deck bush hog.

When we moved in, the sellers suggested, “people around here don’t come forward much, so if you need help you’ve got to ask. If you’re stuck, you might want to talk to Bob N., up the street, he’s good people.” [stderr] 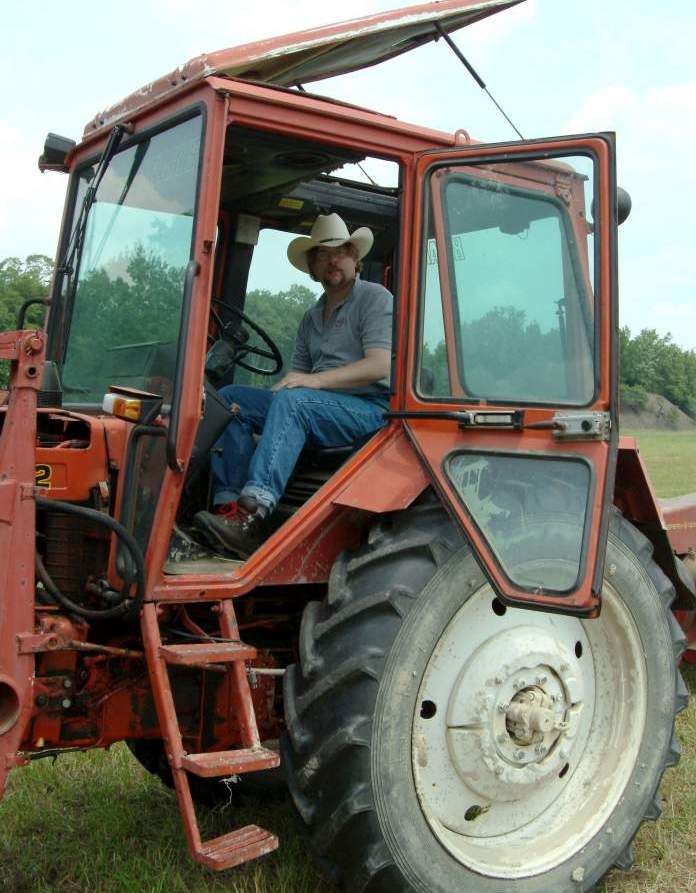 The big tractor had a front-end loader with a huge bucket, that came in very handy for moving horse poop, of which there was a very great deal. The former owners had allowed it to pile up into a sort of stinky matterhorn. There were days spent driving back and forth with bucket-loads of poop, making an entire poop-zone out of many. It’s all composted down now.

Anyhow, I met Bob within a couple weeks of moving in, and I was still at the point where I was figuring out how not to destroy myself with the tractor. That process, like the process I am doing with the forge-work and every other process, is a system of trying something, seeing if it worked, researching it, thinking about its implications and failure modes, and then moving forward or back depending. At any point where I hit a branch that suggests I can improve my set-up’s safety and reliability I usually stop operations until I can do that. In my head, the way it feels is as though I am building a gridded map, with behaviors marked on a decision-tree, and some of the behaviors are colored RED. Those branches of the decision tree are the ones that are not good, like: “making any kind of spark or flame while the bottle of ether is open.” (but that’s another story) So I sit and think about things that could go wrong, and decide if they are worrisome or not, and then I set warnings down those paths that say “no” or “proceed with extreme caution.”

If you think about it, you’ll see there’s a flaw in that process, but it’s an inherent flaw: hypothesizing things that can go wrong is limited by my creative imagination. That’s why I listen when my subconscious is working on a problem and gives me a dream to warn me “hey bud, your propane lines are inauspiciously situated and Lao Tze said something about how much better the sage’s life is if they worry about the feng shui of their propane.” [stderr] If my imagination fails, or my experience in a certain area is not broad enough, I read up on how things go wrong. Seriously, I do a lot of googling for “${thing} fail.”

Bob dropped by casual-like, as is his wont, and introduced himself and we stood talking a bit. One thing I said was, “I’m new to this” and he nodded, then I said, “if you ever have any suggestions or advice, please don’t hesitate to tell me – I think it’s stupid to be egotistical and not ask for suggestions out of pride.” Nowadays I probably would have framed it, to myself, as “toxic masculinity can also mean not asking for advice or directions.”

Then Bob tugged on his hat-brim, and said, “you mean that?”

He reached out and gently shooed me away from where I was standing. “You don’t want to stand under hydraulics. They don’t blow up often, but when they do…” My foot was under the loader bucket, which was about 3 feet up.

I thanked him with all the heartfelt sincerity. Two years later, one of the hydraulic lines on the Belarus blew while I was cutting hay, and the bucket dropped, caught dirt, and everything stopped very fast. Instantly I went from “mowing hay” to “sitting in the field immobile, perched on the steering wheel” and the bucket made a 6 foot long 8 inch deep hammer-mark in the field. Hydraulic oil makes rainbows in the summer sun. Of course I didn’t get to see the hammer-mark until after Bob and I repaired the hydraulic line and got the tractor running again.

“I see what you meant about the hydraulics,” I told him, as an oblique way of thanking him again.

“We” being exwife and I. Since I did all the paying, and she did most of the picking out, and we decided together, I’ll designate it as a “we” operation.

Belarus tractors are made in Ukraine at the reconstructed Dzerzinski tractor works, which was the site of the greatest street-fighting of World War II. I will say this: they make a hell of a tractor. I used to hang out on some of the Belarus mailing lists (the only way to locate parts) and there was one guy up in Saskatchewan who operated an entire fleet of them and said they were the only thing that consistently ran in the winter. Since mine inconsistently ran any time of year, I was skeptical, but he had a great collection of parts and really knew the machines.

A few years ago I gave away the horses, and then I no longer needed the tractor so I thought someone else should get the value of it (it had a great engine, not so great an electrical system) and I gave it to a guy who uses it to power a wood chipper. It’s still running strong and will probably out-last us all.

One of the “proceed with extreme caution” lines I drew was simply never to get out of the cab of the tractor when the motor was running. It eliminates a gigantic tree of possible errors. Bob mentioned that I wouldn’t want to do that if I was professionally operating heavy equipment, but then he said, “starters are cheap.”

…” Stop operations until I can do that” – I am currently waiting for a truckload of 300lbs of steel from metalsdepot, which will be awkwardly welded into a sand-frame. By the way, doing this sort of infrastructure stuff is a great way to practice welding long lines.