The US truly is exceptional. It seems we are the one nation that feels free to bomb anyone, any time. 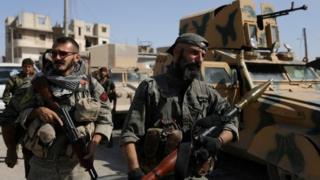 “no boots on the ground”

The British used to be like that. Before then it was the French, and so on – back to the Romans and Persians and on back through history. The warrior-leaders of men do what they want, and the rest suffer what they must. The justifications are always thin, incoherent, lies. [bbc]

Syria has accused the US of carrying out a “brutal massacre” with a bombing attack in Deir al-Zour province.

The overnight strikes killed an estimated 100 pro-government fighters near the Euphrates river.

The Syrian Ministry of Foreign Affairs said it had written to the United Nations, demanding international condemnation.

The US said it was responding to an “unprovoked attack” on allied Kurdish and Arab fighters.

The Middle Euphrates Valley serves as an informal demarcation line in eastern Syria, with the government controlling the western side and the US-backed Syrian Democratic Forces (SDF) the east.

The two sides have clashed over the past year while trying to drive Islamic State (IS) militants from their last major stronghold in the country.

Syria described the latest strikes as “a war crime and a crime against humanity”, and said the US was directly supporting terrorism.

Elsewhere in Syria on Thursday, government warplanes bombed towns in the rebel-held Eastern Ghouta region, near the capital, Damascus, for a fourth day.

The US has no right to respond to an attack on “allied Kurdish and Arab fighters.” If we were to respect the Syrian government’s sovereignty – something the US government pays great lip-service to when the sovereignty involved is Crimean – then they’d have to admit that they haven’t been invited to be there, with all the troops and guns, and that the US has no business injecting itself into a battle between the Syrians and the Kurds.

I feel bad for the Kurds; they trusted the US. And, now that the US has let them be marginalized and suppressed once again, the US has decided to heat up a battle around them, with a genocidal and violent government. How is any of this going to help anyone in the slightest?