All my life I’ve been embarrassingly lucky. Ever since I did such a fantastic job of picking my parents, I just seem to stumble into the things I need when I need them. I don’t kid myself that it’s anything to do with skill or merit but I’ll take it. Some of you may hate me by the end of this posting, but I’ll try to make it up to you.

So, I’m going to tell you a tale of embarrassing riches, which will end with a giveaway offer. Bear with me.

About 10 years ago I started doing a bunch of leather-work – Thenwife was a farrier and saddle-maker, so I had access to scraps and a great big sewing machine. When she left, the tools went with her, and I found a good deal on a chinese-made sewing machine for heavy hide, and started looking for a smaller machine that I could do felt linings and light leather with. When I was in high school I had spent a lot of time using my mom’s old Singer treadle machine, and got and repaired a newer Singer machine from a yard sale (needed new carbon brushes in the motor!) so when I was doing reenactor stuff I had a machine that I could beat to pieces and I pretty much did. I gave it to a friend when I quit the reenactor group in 1986 or so. Anyhow, I needed a sewing machine.

My plan was to stalk Ebay for a vintage Singer that I could fix up. I figured that there was about a 90% chance that any “broken” machine was mechanically sound (the old Singers are built better than F-35s) so I’d search for “As Is.”

And there it was! A “buy it now” listing for two vintage Singer machines “as is or for parts” – $75. Shipping was another $75. So I paid and waited. A couple days later my long-suffering UPS guy, Eric, grunted two heavy boxes onto the porch and I lugged them over to the studio to examine the contents.

The first machine looked like it was good to go! All it needed was a bobbin case, new power belt, and the main gear had been greased sometime around 1900 and the grease had congealed into a hard waxy substance. That’s easy to fix. Machine #1 was somebody’s baby, that had seen hard use, and had been retrofitted with a motor – it was probably originally a treadle machine: Model 15/90. 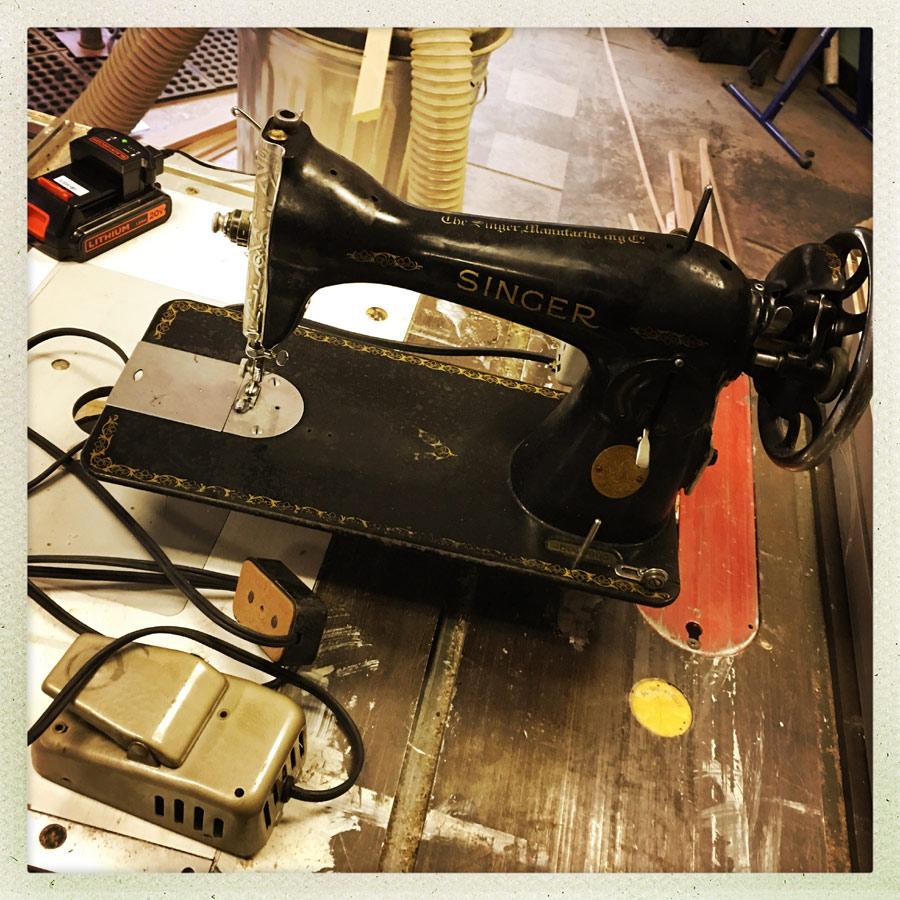 Machine #1, out of the storage closet after a long nap

Then I turned my attention to the 2nd box. It was a mess – taped together ancient cardboard. I opened it and my jaw dropped. You know how Howard Carter described opening Tutankhamen’s tomb:

Presently, details of the room emerged slowly from the mist, strange animals, statues and gold – everywhere the glint of gold. For the moment – an eternity it must have seemed to the others standing by – I was struck dumb with amazement, and when Lord Carnarvon, unable to stand in suspense any longer, inquired anxiously “Can you see anything?”, it was all I could do to get out the words “Yes, wonderful things“.

I was looking at a brand new vintage Singer machine. At first I thought it was just in very good condition, but – no – that shredded cardboard and strapping tape was the original box and someone had bought the machine back around 1905, and left it in the box.

See what I mean about Marcus’ luck? I had just paid $150 for a brand new 1904 Singer machine (and a spare). The spare, Machine #1, went into the storage closet where it sat unmolested until this week (when I dumpstered a bunch of stuff from there and decided to pull it out for a look-see). 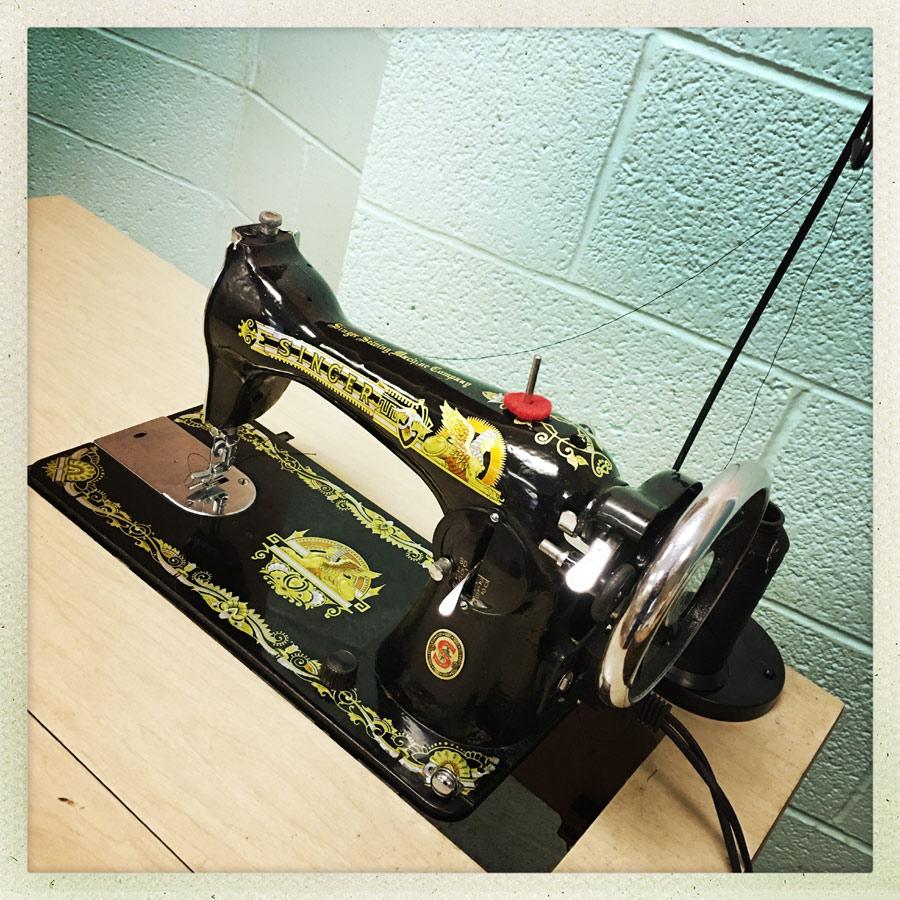 Machine #2, rigged for lots of poly thread. A flawless rocket of sewing perfection. Look at the reflection of the cinder-block wall in the paint!

No exaggeration: brand new. No dust in the base. Not even scratches in the brass of the power-plug. I pulled back the slide-plate and the only fingerprints on it were mine. I hardly need to mention that it sews just great and has been serving its mission with gusto ever since (amazingly, the school building came with an empty sewing machine table). The rubber belt was decayed, and so was the bobbin winder contact wheel, but I had it in the table and working in a half a jiffy.

After I pulled it out of the closet this week, I started to feel bad about Machine #1. It’s a perfectly good machine and I was so distracted by Machine #2 that I just parked it in the closet and went squeeeeeing off and forgot it.

Do any of you want a really nice sewing machine, free? I’ll pack it up and ship it anywhere in the US. Know a kid who wants to learn how to sew? Machine #1 needs a home.

During a break in hauling ceiling tiles, I did a checkout on it and it was pretty much what I remembered. The bobbin winder was jammed with old gunk. 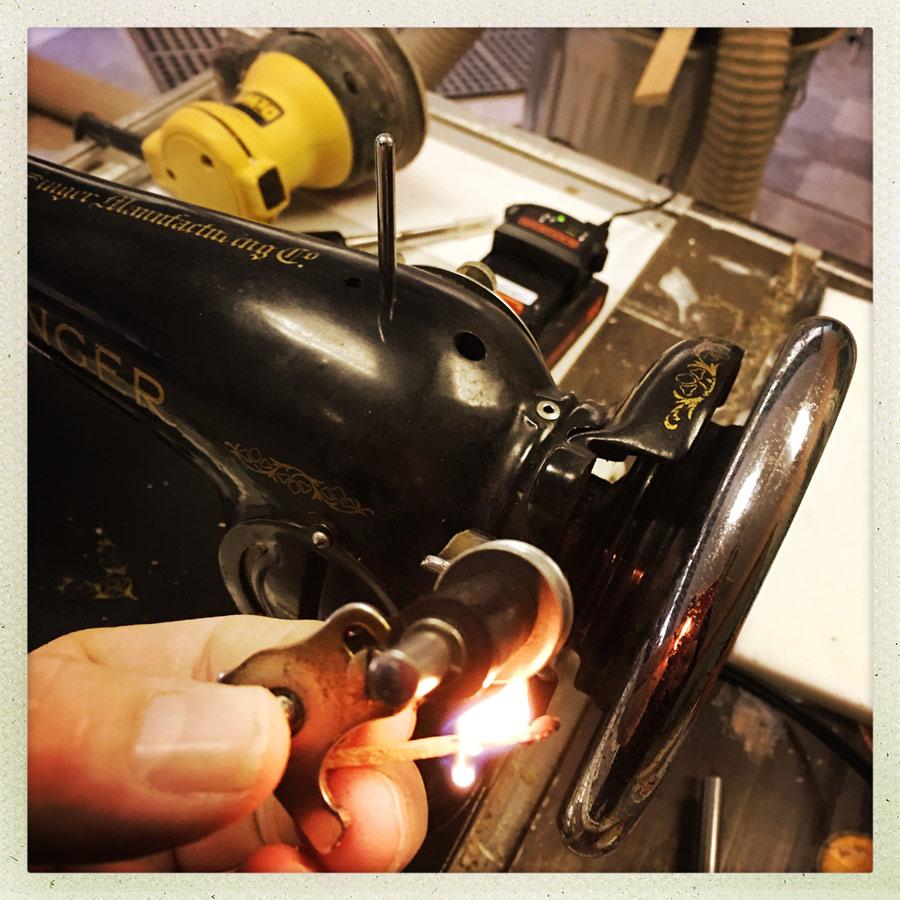 The trick for unjamming those is a little heat from a match, to break it loose, then irrigate it with acrylic solvent or methanol. 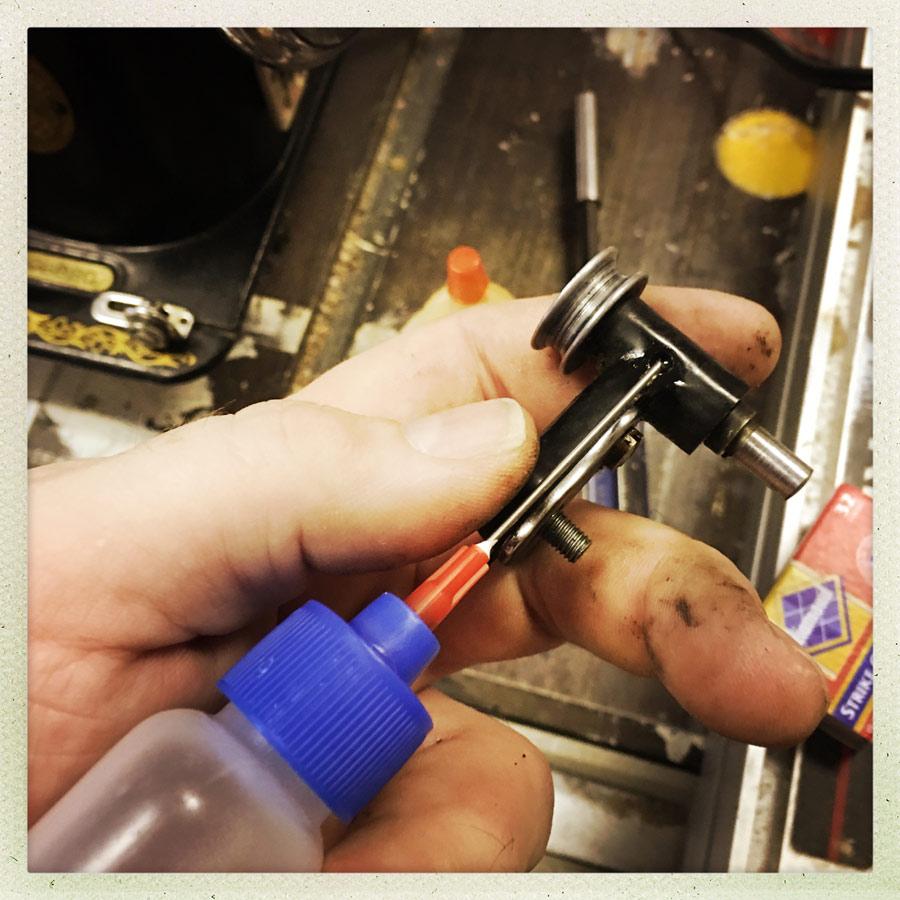 Bobbin cases on ebay: $12. New belts and contact wheel: $10. Removed the back-plate of the foot-switch, vacuumed it out, oiled the screws. Then waxed the frame and metal, and polished it. 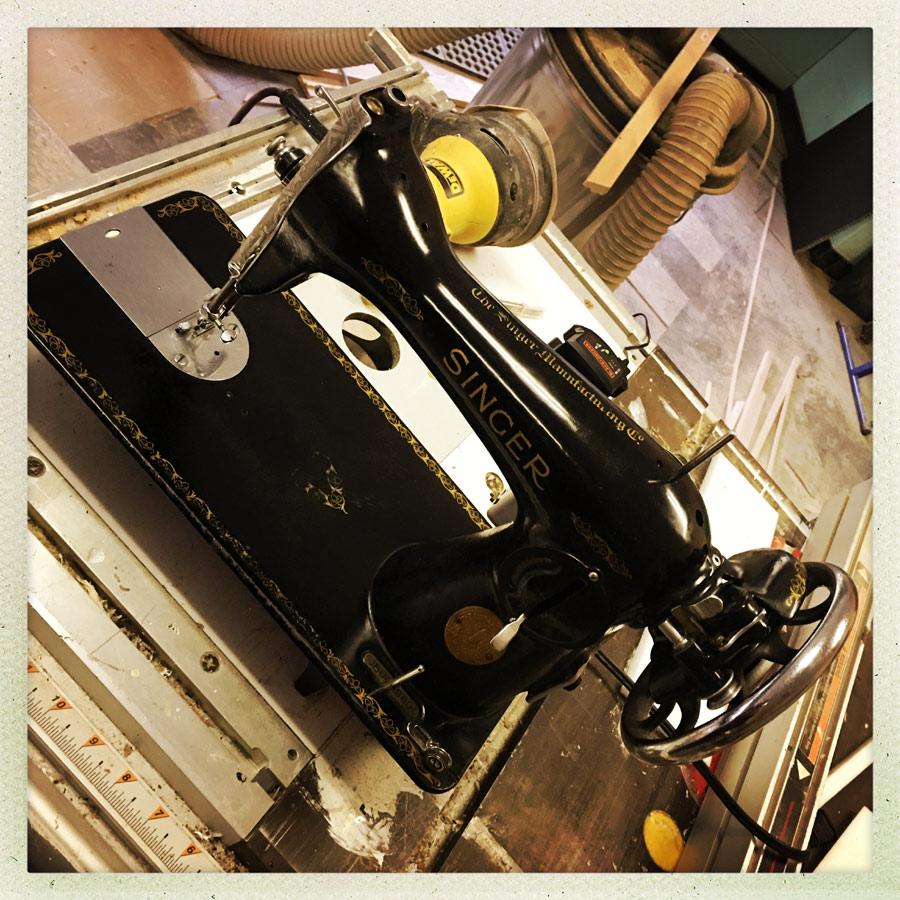 Please help Machine #1 find a good home. She says “Don’t put me back in the dark closet again”

I’m not sure how to orchestrate this, but please comment or email me and maybe we can collectively decide who’s got the best suggestion. I want something specific, not “maybe someone who’s making clothes for Puerto Rico?” but if you know a specific person who’s doing that and needs a sewing machine, that might work. I’d rather you didn’t ask for it with a plan to sell it and pocket the cash, but if you think that’s a good idea, for some reason, you can make the case. 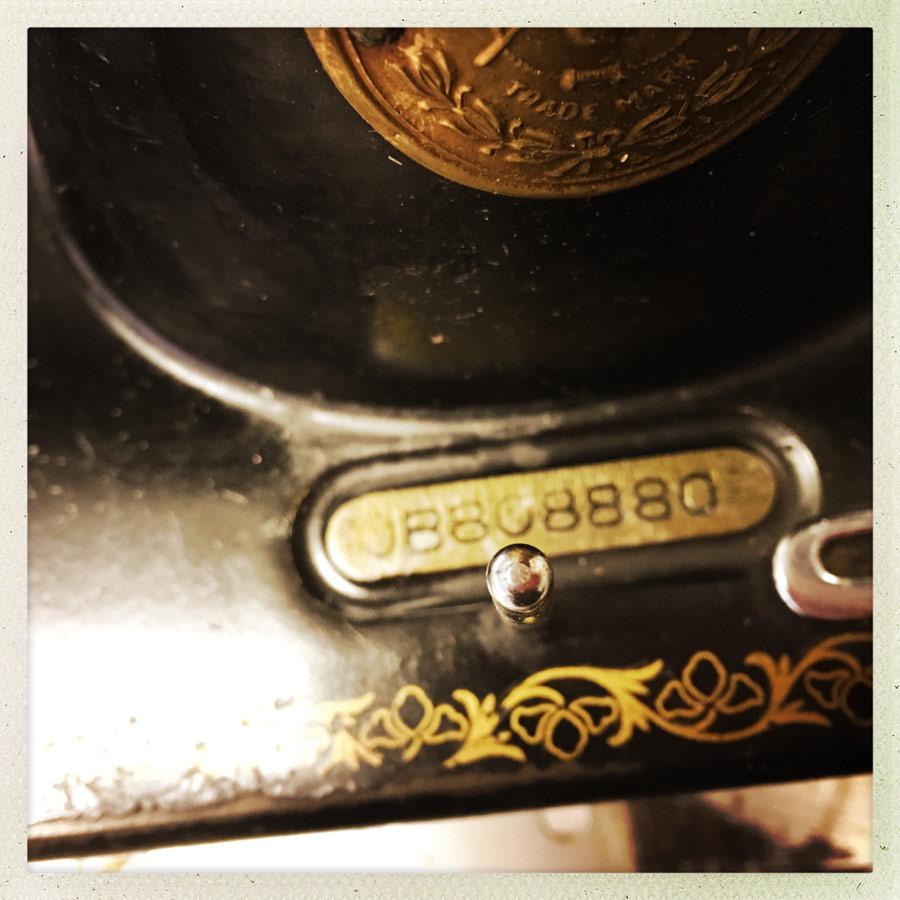 The morbid story I tell myself about these machines is based on my grandmother. My grandparents lived through the great depression, and bore the marks of that the rest of their lives. Grandma and grandpa would always say “we don’t need that” because they were used to getting by on nothing – grandpa did odd jobs (including some really horrible ones) and hunted, to get by. But, because times were hard, sometimes you could get your hands on luxury items cheap, or someone would die and give you something precious. Grandma had a sewing machine, too – like Machine #2 – new and beautiful, but she never used it because it was too nice and if it was damaged, it would cost too much to fix. It sat in a box in the attic and she only took it out and started using it in the 70s – 50 years after she got it. That’s the story I tell myself about these machines: someone stashed away a priceless treasure, waiting for when they could retire their old one and make wonderful things. But that day never came; perhaps a heart attack or another misfortune came first, and their child couldn’t bear to get rid of the first machine, and stuck it up in the attic with the other sewing stuff. They never opened the other box. They never looked at it at all, nor did their kid, who sold the whole lot on ebay and assumed they were broken because nobody would store a working machine, let alone a brand new one, and forget it in an attic.

Administrivia note: I am going to be flying to Frankfurt this weekend/early next week to speak at a private conference on banking security, so I may be a bit quiet. Or, if I’m jet-lagged and can’t sleep, I may be a bit argumentative.

As always, if you email me and don’t get a response in a couple days, you can post here. I have very aggressive strategic spam-blockers and sometimes they miss-classify incoming messages.

More AI Photography » « Consent, How Does it Work?