Judging from some of the reactions on the internet, consent is a very difficult thing to figure out. Personally, I’ve never had any problem with it. Here’s my algorithm:

If you’re not sure you ask. If the person you ask is too drunk or fucked up to reply with an enthusiastic “yes” then wait.

That’s one of the pieces that those who are find consent “complicated” seem to want to ignore: waiting is always an option. If one is rushing to get some sexing in really quick before one’s prospective partner changes their mind (or something else about the situation changes) then it’s always shaky ground. If one wishes to be sure one has consent, wait, and check again when the situation evolves. Or make the situation evolve, then check back. It’s simple.

Worked example: you’re a big time studio boss and an young ingenue is making big eyes at you. Ignoring the power differential, you ask, “are you flirting with me? Because if you are, and you’d like to go out for dinner and a long walk on the beach with me, I’d love to – just as soon as we’re done casting for this film. I wouldn’t want you to think I was mixing business with personal affairs.” If the dynamic is that you’re afraid they’ll change their mind when they find out you think they can’t act and won’t get the part, then you’re not getting consent, you’re being offered a trade. Or worse, they think you’re offering them a trade.

Another worked example: you’re Thomas Jefferson and your comely slave Sally Hemings is, well, comely. Perhaps there is magic possibly going to happen? Being a great political philosopher, you recognize that there is a gigantic power differential between you and so you free her and give her a bunch of money. Does she leave or does she stay? (My bet is she hauls ass out of there and never comes back) But if the question is “can someone I own consent to sex?” then the obvious answer is to wait and see. And don’t be coercive: “Sally, if I free you will you be my mistress?” is offering a trade, not asking about consent.

Trading for sex and consenting for sex are on the same chart, but they’re not always connected. That’s one of the other things that “confuses” some people. Although, I will say for the record: I don’t believe for a second that they are confused; they’re just saying their confused because it serves their agenda. 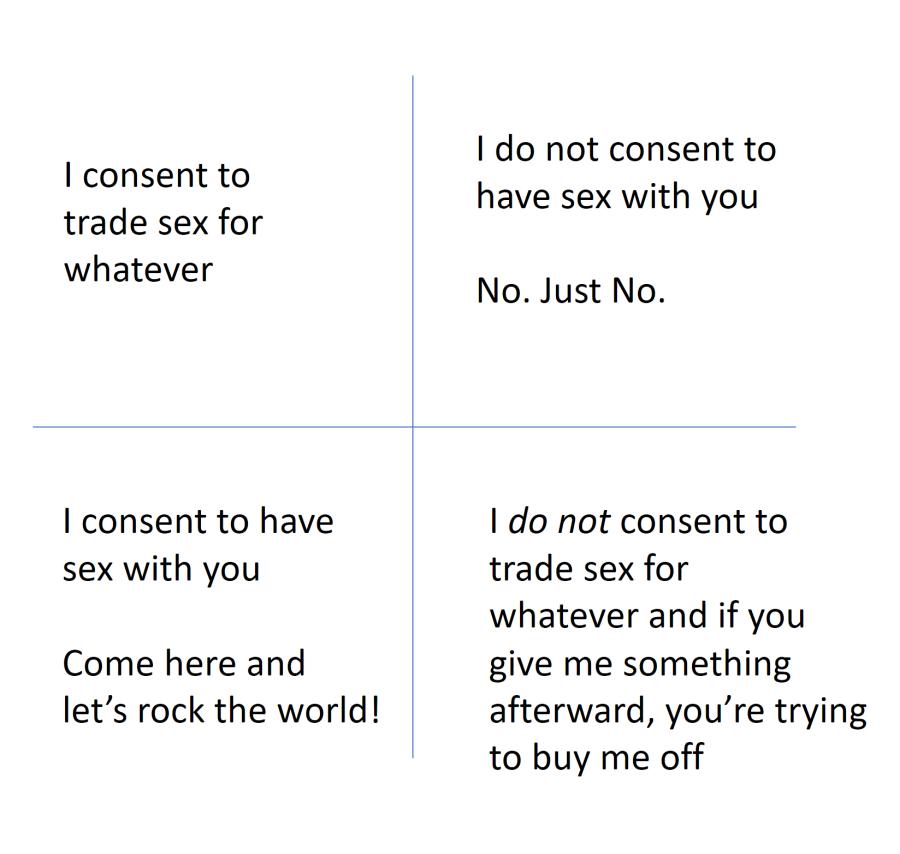 It seems to me that if you break it down like that, it’s pretty hard to get confused. Unless you’re a New York City cop. [wash]

Two police officers accused of raping a teenager while she was in custody resigned on Monday, the New York Police Department said.

The two former NYPD detectives — Eddie Martins, 37, and Richard Hall, 33 — are facing dozens of criminal charges and a possible $50 million lawsuit after the teenager accused them of raping her while she was handcuffed inside a police van. The indictment followed a weeks-long investigation of the two former officers who, prosecutors said, pulled over a car driven by the 18-year-old, arrested her for drug possession, then took turns raping her in the back seat.

The resignation came three days before the officers were scheduled for a departmental trial, a separate proceeding from a criminal trial. During that process, officers are tried on charges of misconduct. A trial commissioner decides if they’re guilty and makes recommendations to the police commissioner.

What that rather bland description doesn’t touch on is that the cops initial move was to say that the girl consented. Remember my earlier analysis? What the cops did not do is say, “Miss, you interested in going out with a couple of cops? Maybe we can give your our phone numbers and you can call us if you ever want a ride in the passenger seat of a squad car.” No, they were taking advantage of the situation which happened to be that they had arrested her, handcuffed her, and had her in the back of the car in their power. The cops were probably going for that lower-right quadrant: the implication was that if she played along with them, they’d let her off with a warning and maybe some STIs.

I have a fair bit of experience with BDSM play, and one of my former play-partners was really into authoritarian play. They would have been pretty amused to role-play that situation, but not amused at all to have it happen for real. As a masochist friend of mine once remarked, “I do not eroticize stubbing my toe.” And, of course, the difference between role-playing that situation and having it happen for real is that either party can stop at any time and say, “hang on a second, this is not fun. Let’s go play Playstation instead.” It’d be a buzz-kill but, rape is a bigger buzz-kill and there are some great games for Playstation. 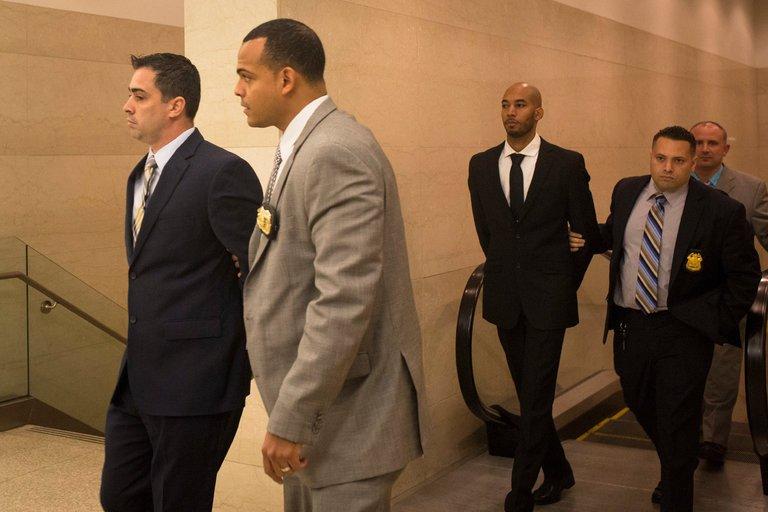 All too rare a sight – cops getting perp-walked.

Let’s segue into cop-fantasy land: the arrested suspect in the back wriggles and says “you know, officers, this is kind of hot. When I’m done paying my fine and I’m on probation for that possession charge, why don’t I give you a call and we can do this again someplace quiet and consensual-like?” It could happen, but I’m guessing it doesn’t happen very often. It could happen that the suspect in the back of the car goes into the upper-left quadrant and says, “hey, officers, if you forget we ever saw those drugs, I’ll show you a good time.” That’s a trade. It probably happens. Any cop that did a trade like that is abusing their position.

Before this story hit the press, the NYPD tried to whitewash it: [root]

Typically, the NYPD holds off on taking disciplinary action until the conclusion of any criminal proceeding.

That’s done because when a cop is grilled by Internal Affairs, they are compelled to answer all questions under threat of termination, and anything the cop says can’t be used in a criminal case.

But [Officers] Martins and Hall refused to answer any questions in their Internal Affairs interviews – so the NYPD set a Tuesday date in the department’s trial room.

Oh! This is one of those Roman Catholic Church trials – in which they decide whether, after gang-raping one of the suspects they are sworn to protect, if the cops are really truly sorry, in which case they can move to another diocese and do it again.

It sounds legit to me. But, wait: “NYPD set a Tuesday date in the department’s trial room.” Yeah, they have their own justice system, those cops.

The officers have pleaded not guilty to the charges, and maintain that the sex acts were consensual.

And guess what the cop’s lawyers have said? [nyt]

Their lawyers vowed to vigorously fight the charges, arguing that prosecutors had given too much credence to the woman’s “uncorroborated” claims and suggesting that the encounter was consensual.

I bet you didn’t see that coming, did you? It’s like a surprise plot twist out of Law&Order. Yet, the claims are corroborated: the cops’ own surveillance cameras caught the raping cops stopping a car with 3 passengers (2 men, one woman) and claiming to find traces of marijuana in the cup-holder, some prescription pills, and they only arrested the woman. These guys have done this before; that wasn’t stupidity, that was confidence.

as Detective Hall watched through the rearview mirror and the young woman cried and pleaded with Detective Martins to stop.

When someone is crying and pleading for you to stop, you cannot claim to be confused about whether or not they are consenting.

Because of police union rules, there’s a good chance that these dirty cops will be back in uniform and on the street in a couple years. The whole “retirement” dodge is a way of avoiding the internal finding of a crime. So, while they may be getting a justified shellacking for their crimes, the NYPD will mark them down as a couple of retirees and – legal problems aside – they may hire them again someday.

Calling the indictment “schizophrenic,” John Arlia, a lawyer for Detective Hall, noted at the arraignment that the charges included accusations of both “forcible” rape and of using sex to bribe a police officer – a “self-contradictory” position

… just in case you were about to complain about scumbag lawyers who’ll say anything to defend a client. Parse that carefully: the charges are that the cops’ defense is that the victim attempted to bribe them, and that they raped her anyway. That’s what the crying and saying “no” was about. There’s no confusion here at all; it’s all pretend.

So much for the responsibility of the “chain of command” who doubtless knew exactly what kind of assholes they had on their team. The reason the blue line didn’t circle the wagons around these guys is because they’ve become a liability.

I imagine someone gunning these slime down and then explaining that “they said it was OK. Really, they wanted it.” Except justice doesn’t work that way in America. Blue lives fucking matter.

Things That Delight Me: An Orphan » « Phrygian