As I headed in to the workshop this morning, the big white bird was on station. I tried to get a picture and it flew away, complaining. We have established a routine.

This morning, the state of the blade was this: 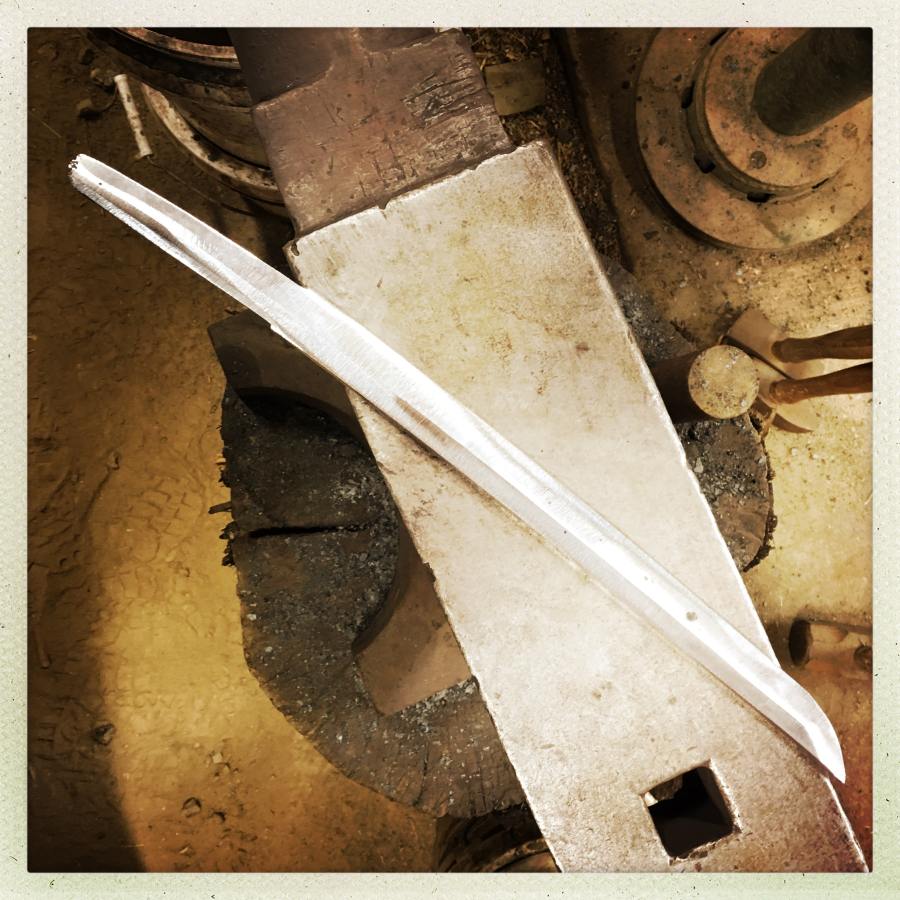 It is now beginning to look like something credible. You can see vertical banding from the grinder/sander, and the grind-lines are sharp but not perfectly harmonized. Today gets spend addressing that with successive passes with files. In traditional Japanese shops, we’d be using a thing called a Sen –  a draw-knife that’s sort of like a spoke-shave. Michael explains this as a “one-toothed rasp,” which is pretty funny.

The metal is still soft, so a crosscut file removes it pretty quickly. Working at an angle to the scratches from the grinder, we use big flat files to clean up the planes even more. Basically, the process is to keep cleaning up the planes, forever, with successively finer adjustments. 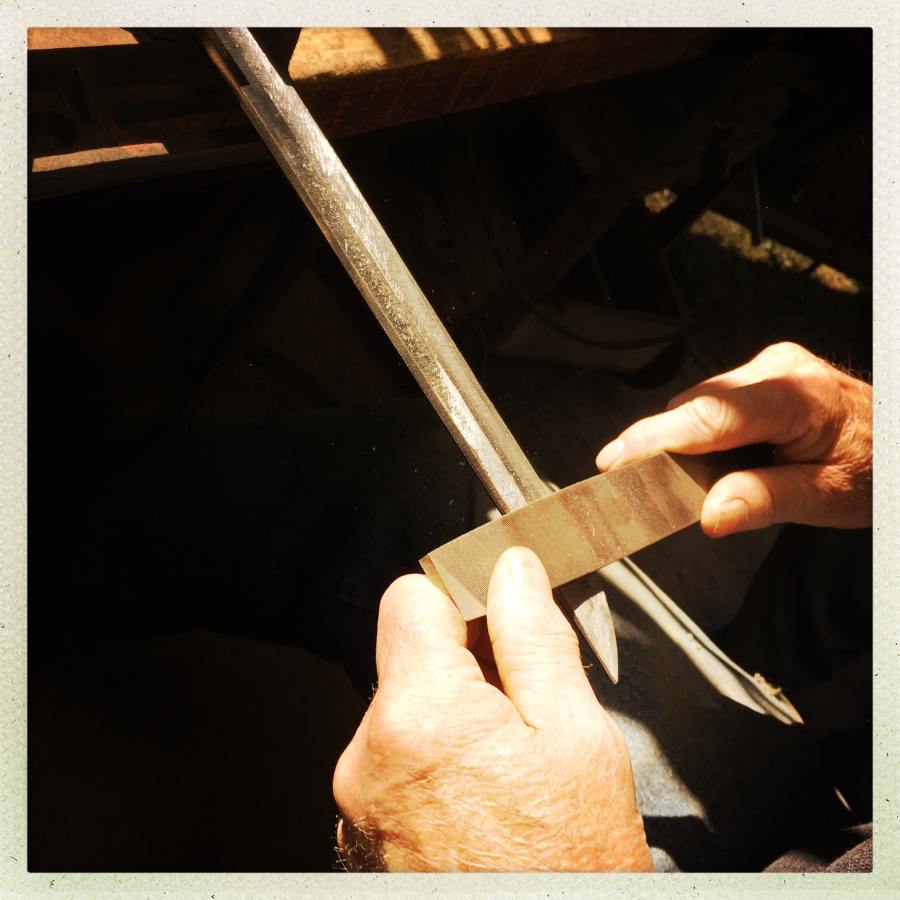 Those are Michael’s hands; showing me how it’s done

After the crosscut file has been used to refine the lines and remove scratches, then we switch to a flat file, held across the blade, and stroked straight along the planes to refine them further. It’s really cool the way this works; you’re shaving the metal very flat, very quickly. As the lines get refined it becomes easier to find places where it’s obviously wrong, in which case we sometimes run to Michael and get advice about where to remove things – I noticed at one point that the sword was kind of chunky – the tip was the same thickness along the back as near the guard and it needed to taper slightly – so Michael took it back to the grinder and did a few magically clean passes, which I cleaned up with the files, and it immediately looked lighter and better.

This continues off and on all day. Changes to the blade are slight but noticeable; it keeps getting more and more sword-like. I took a break and went over to the clean-work shop and did a few pictures of some of the pieces that are there. 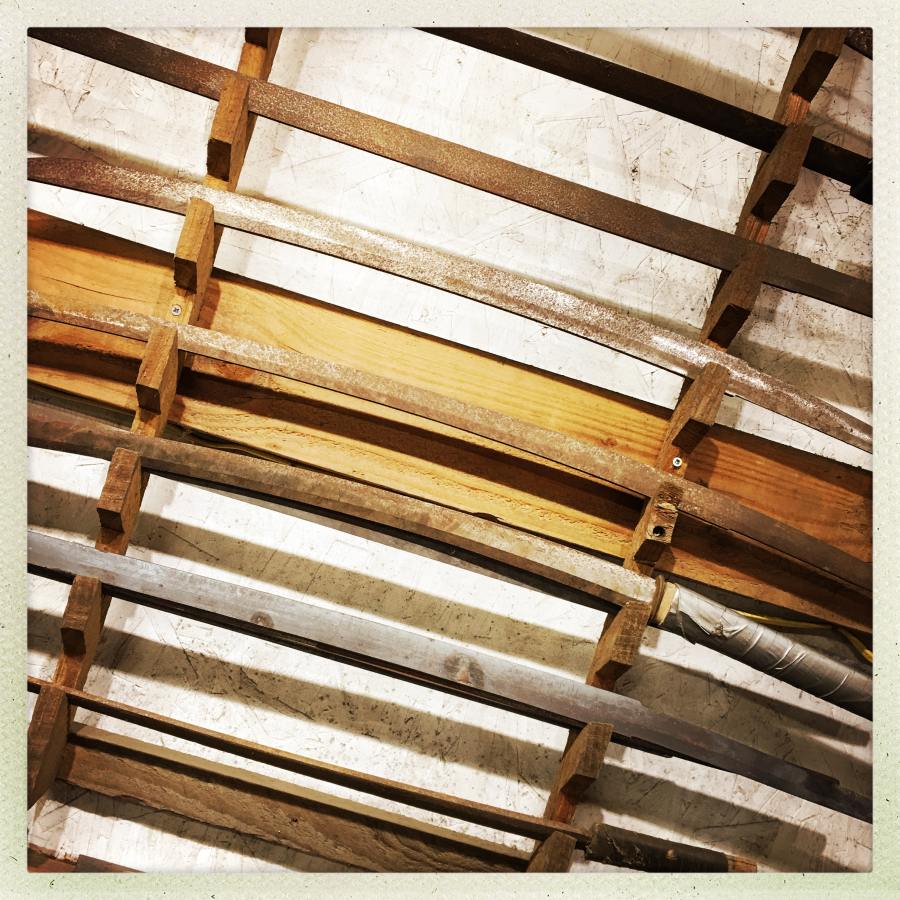 There are blades everywhere. Some just standing up in corners, some on racks, all in various states of finished or rejection. Blades get made just for testing, or as experiments, and each one has a story. “Oh, that’s one we did for the Forged in Fire show and they wanted us to do a big dramatic quench but we only had time to clay one side of it, so it needs to be normalized and re-quenched.” None of the blades are treated disrespectfully, but when you’re the person who makes them, they aren’t magically inaccessible items; each has a history and a purpose and some of them will never be finished because they’ve got something wrong that doesn’t make them worth completing. 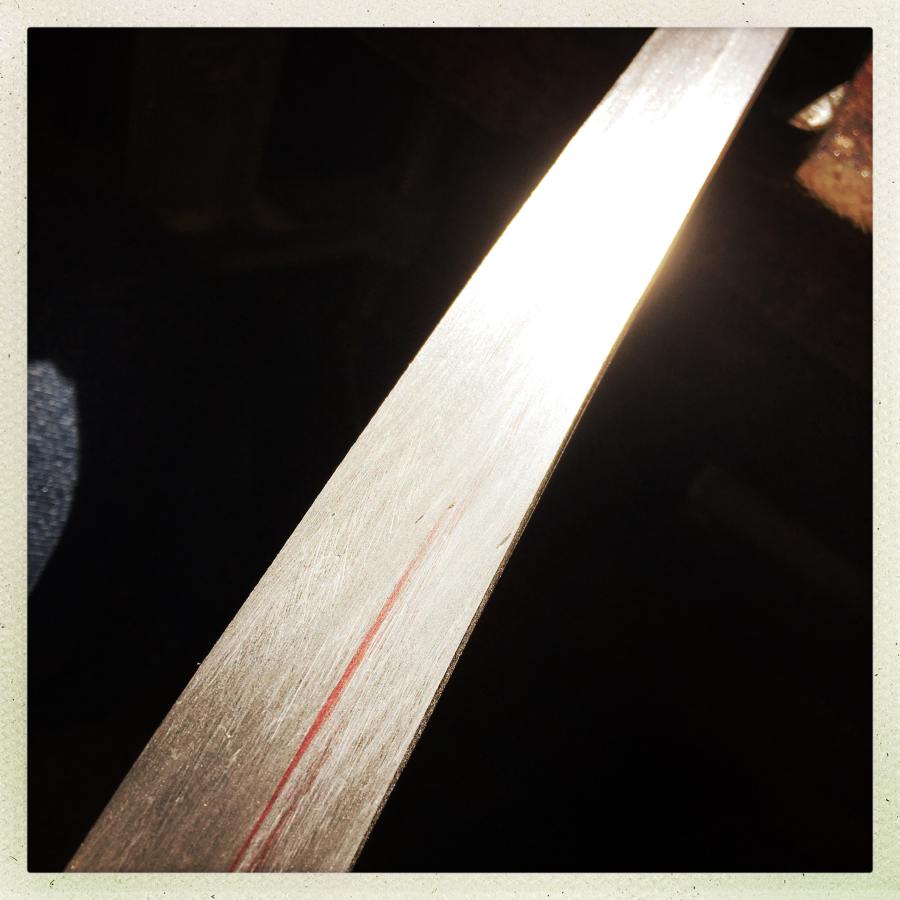 It’s hard to see the lines on the blade, depending on the light, and the angle, so I hit on the idea of putting sharpie along the line, then rasping until it nearly disappears; that way I can see that I’m not rolling over it and flattening it out. Scraping the blade with the file is a lot like a woodworker using a wood-scraper, which can give a pretty fine finish. This is not a fine finish for a Japanese sword, by a long shot, but it’s getting successively better. If I were making a conventional knife I’d probably switch to sanding it with 600 grit wet/dry sandpaper glued to a block, then 1200 grit, then call it a day. 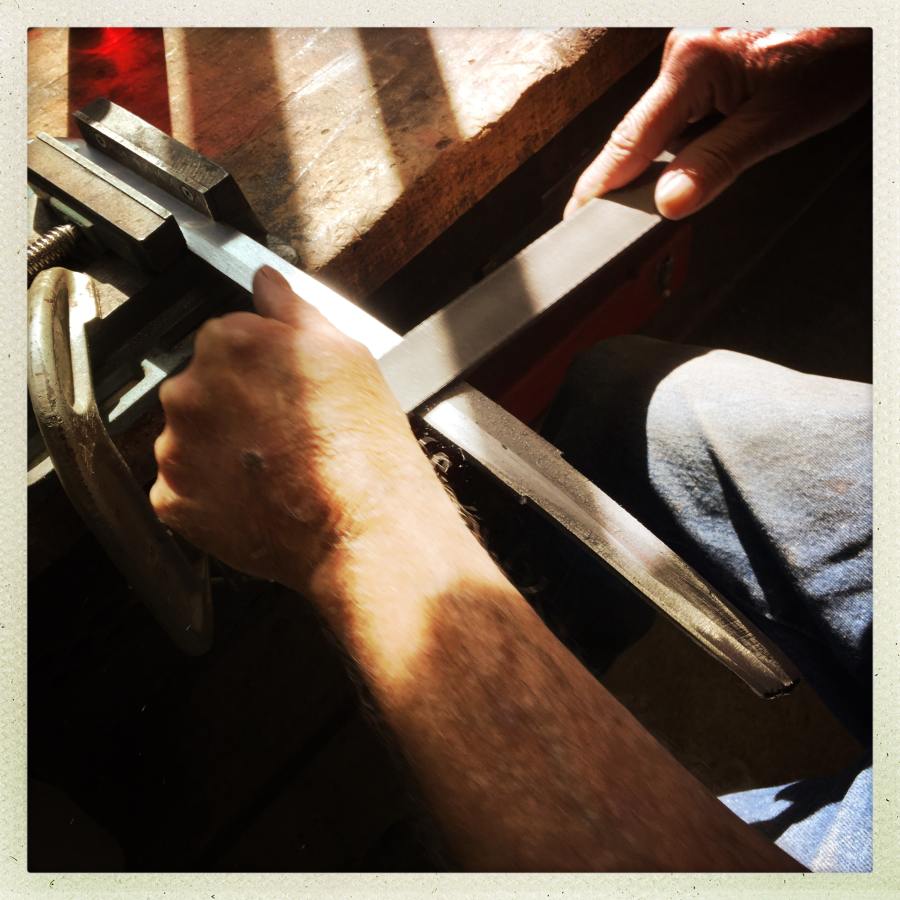 This is from when Michael was demonstrating how to flatten the plane using the file as a scraper. You can see how the grind-lines from the sander are gone, and how much flatter the metal becomes; it doesn’t take much, just a dozen even strokes. We constantly check to make sure we’re not doing one side too much, or moving the line up or down by changing the angle. Since it’s hand-work now, there’s not a lot of error – it’s possible to take off too much, but it would happen slowly. On the grinder a severe error can happen in fractions of a second. With the file, you have time to think. I immediately felt comfortable because I realized I was working with a very predictable rate of change, that inherently tends to make changes toward “flatter and smoother.” 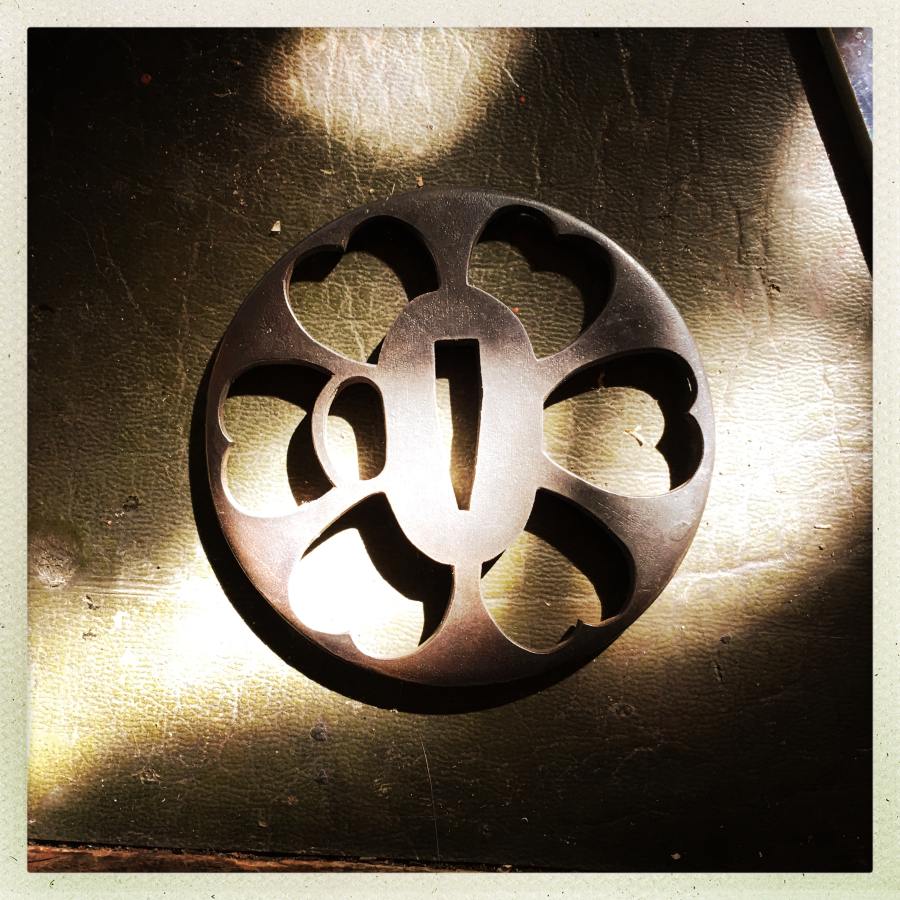 A guard (Tsuba) made by a long-term student 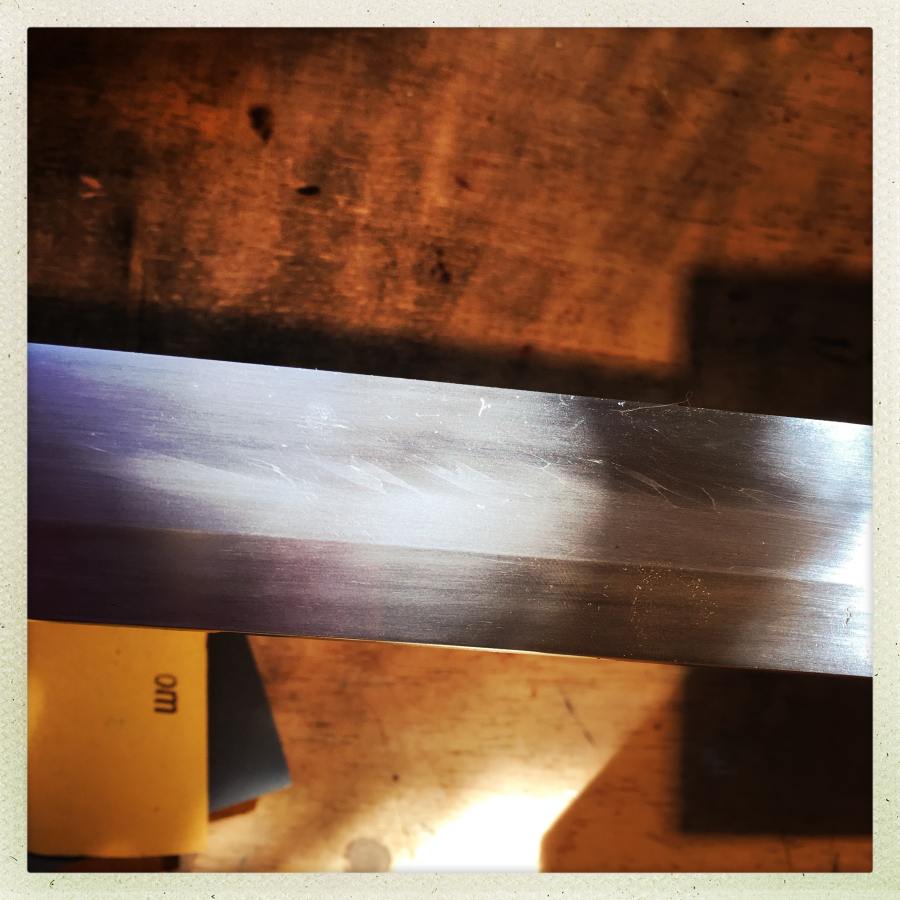 At the end of today’s session, we put the refractory clay on that will be used to define the temper-line when the blades are quenched, tomorrow. The clay is a mixture of fire cement (aluminum oxide and binders) with added iron oxide, gooped into a slurry that’s about as thick as toothpaste. The purpose of the clay is to slow the cooling of the back of the blade, which will keep it from hardening; the edge is exposed and will hit the water without anything to slow its cooling. That will cause it to crystallize and form martensite, which is a harder but more brittle form of steel than slower-cooled pearlite. One of the characteristics of a Japanese sword is the cloudy temper-line (Hamon) which is defined by the way the clay is layered to expose or protect. 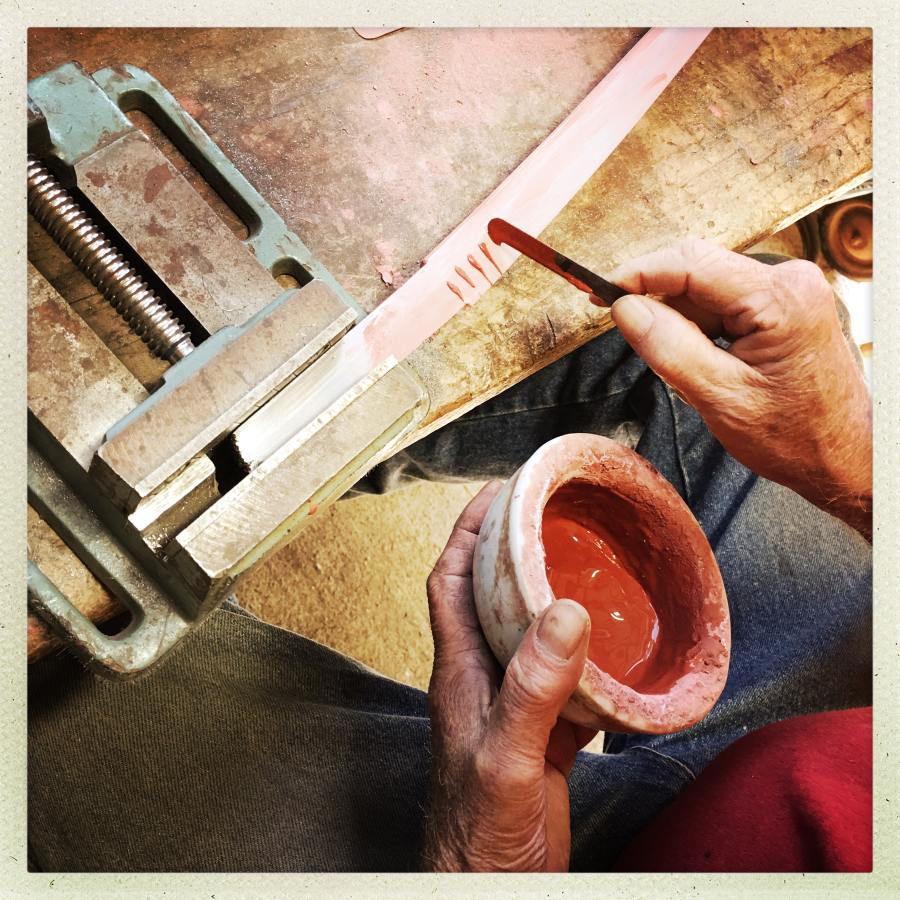 Michael demonstrating how to apply the fire clay on my blade

The preferred technique for putting the clay on the blade is to leave little fringes (the idea being that if a chunk gets knocked out of the edge it will tend to not crack lengthwise since it will eventually reach a fringe/finger of pearlite that won’t crack. I’m hoping that this all theoretical with regard the blade I am making; I do not intend to try to cut any rebar with it.

After the little fringes dry, a second layer is added that covers the sides and the back. Then the blades are stacked in a corner of the shop to dry. Tomorrow, first thing, I’ll get a picture of the fully-clayed blade (I couldn’t both hold it and take a photo) and then we’re going to quench them. That’s a dramatic moment in any sword’s life. As the edge hardens it also increases the curvature of the blade slightly; I assume martensite is larger than pearlite, which means the edge gets bigger, pushing the back into more of a curve. The edge of the blade is internally stressed, like a Prince Rupert’s drop except the stress is all controlled in one axis. How did this technique evolve? Did some ancient swordsmith drop a blade as he was carrying it to the quenching-trough, and half-quench a blade, then figured out what must be happening because the blade distorted? 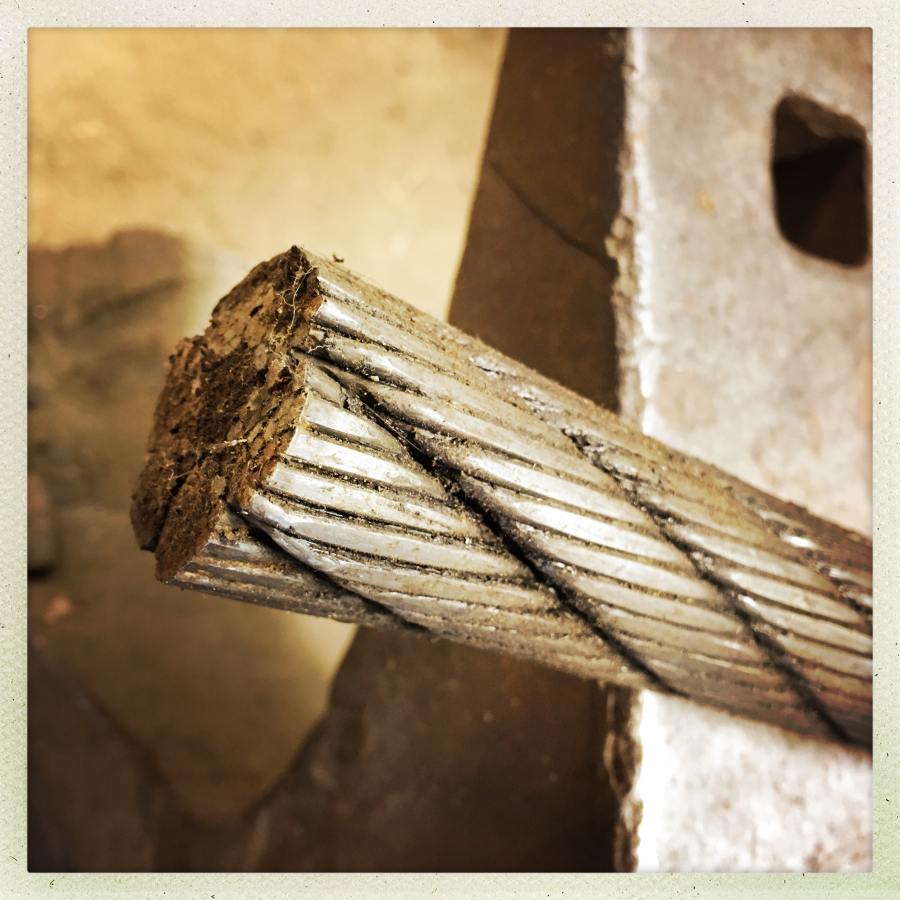 That’s what the wire rope looks like. It’s a bit under 2″ in diameter (about 45mm) and consists of 6 bundles of twisted wire, which are also twisted together.

I mentioned dakotagreasemonkey’s explanation of the difference between wire rope and cable, and we’ve been referring to it as “wire rope damascus” ever since. I don’t know if the entire knife-making community will swing around, or not. They probably won’t switch to metric, either.