There really isn’t any part of the forging process that is more important than any other; you don’t end up with a finished sword without executing the other steps correctly, too.

This morning, the clay had dried on the blade. We had some coffee and talked for a while, then Gabriel fired up the forge and we set everything up. I put my DSLR on a tripod so I could use its video mode to record the quenches. 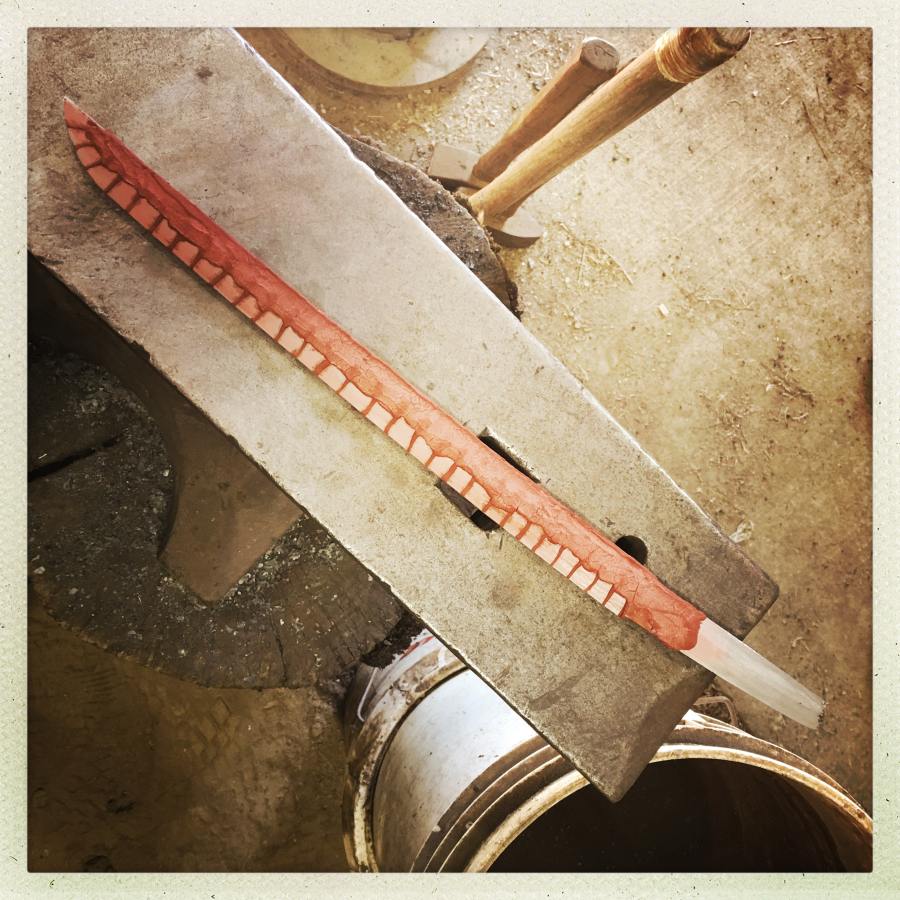 I started kicking myself pretty quickly because I realized I should have traced an outline of the un-quenched blade, so I could compare it with an outline post-quench. 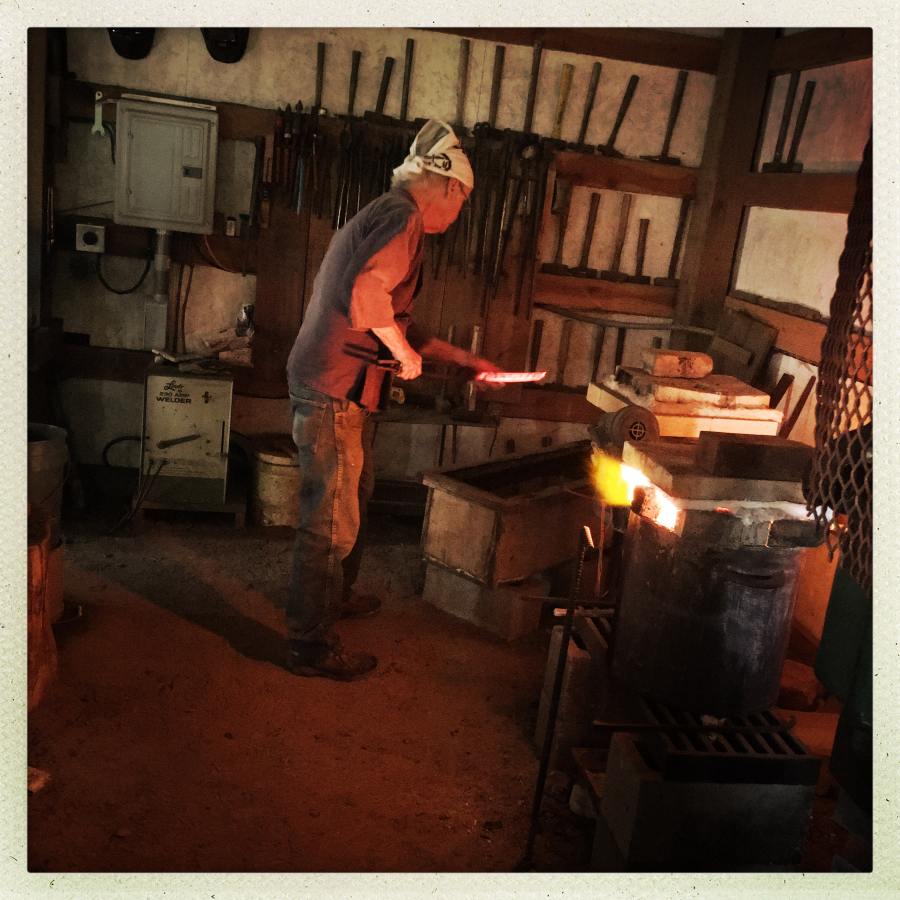 The blade looks really neat with the clay on it, while it’s hot for the quench. The metal glows through the clay. Then, a hiss and some steam. There is all sorts of thermodynamics going on inside there; the inner part of the metal cools slower than the exposed edge, of course, and so does the insulated back. I found some diagrams that illustrate how the thickness of the clay affects the development of the martensite in the edge: 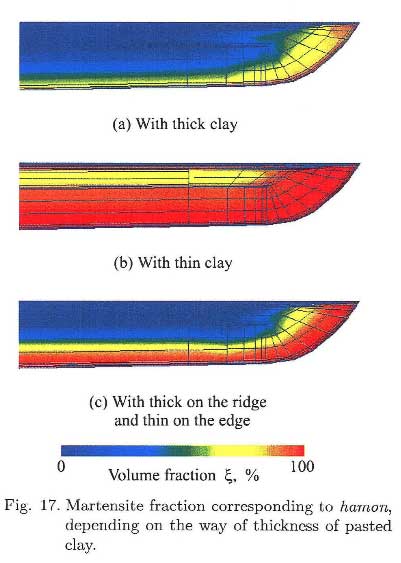 The clay sort of comes apart from the thermal shock. 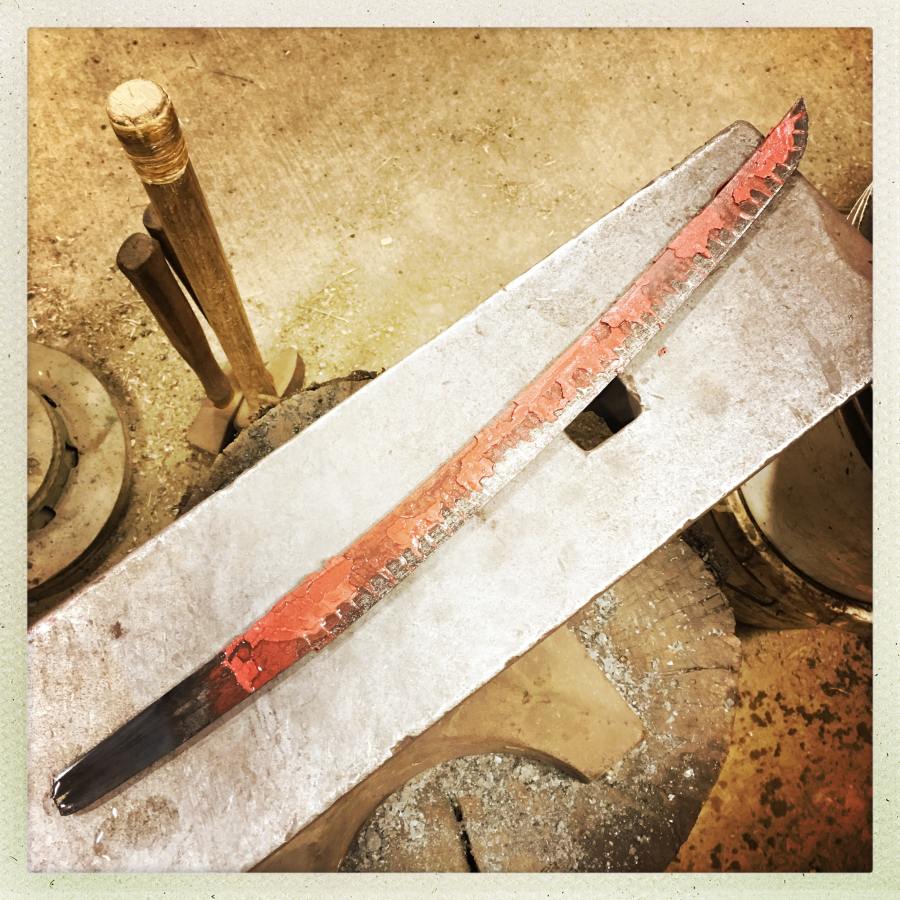 After that, we clean the clay off and it’s back to grinding!

The blade is not fully ground to shape before quenching, because it would be thinner and more likely to distort; the thickness also affects the quench – a thinner edge would possibly over-harden. 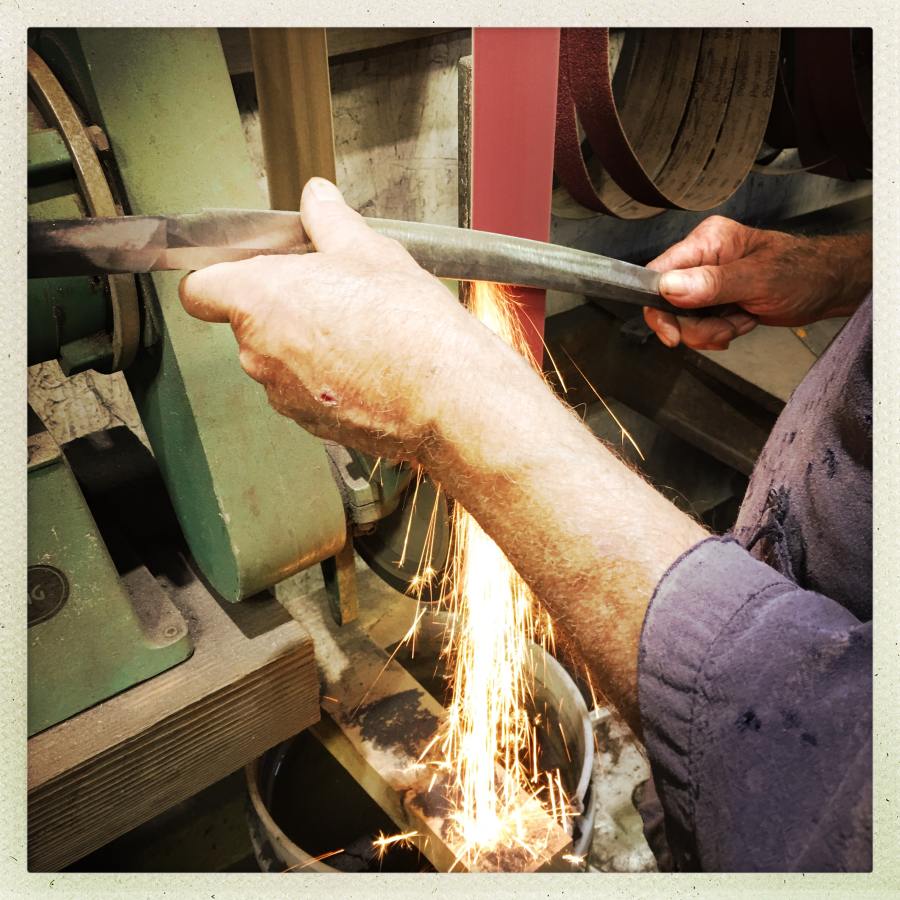 Post-quench, we tweak and correct the shape of the blade, as we bring the sides in and thin the edges more; it’s a constant process of grind, examine, think, grind, examine, think. Having Michael there is tremendously comforting – when we get to the spots that are tricky (usually, that means the tip) we can ask for help.

My blade turned out to have a slight bend in the tang: it was simultaneously twisted and curved. Michael put it in a vise and used a slotted wooden wrench to just bend it very slightly. Immediately, it was obvious how the curve at the tang had visually thrown the whole back out of line – that meant my natural tendency was going to be to grind the whole thing straight, which would thin it out down the entire length. I was frustrated a lot of the time because I could see what was happening, and could reason where I needed to be grinding, but I just couldn’t get the blade on the belt at exactly the right place and angle. Michael, with decades of practice, just positions the blade on the grinder exactly where it needs to be, every time. Every so often, we’d hit a good pause-point and take the blades to Michael who’d do a couple easy-looking clean-up passes – big, smooth grids – that would suddenly make the whole thing look much better. It was a bit discouraging that I couldn’t do that, but a lot encouraging that I hadn’t gotten my grinds so far out of line that it wasn’t fairly close. 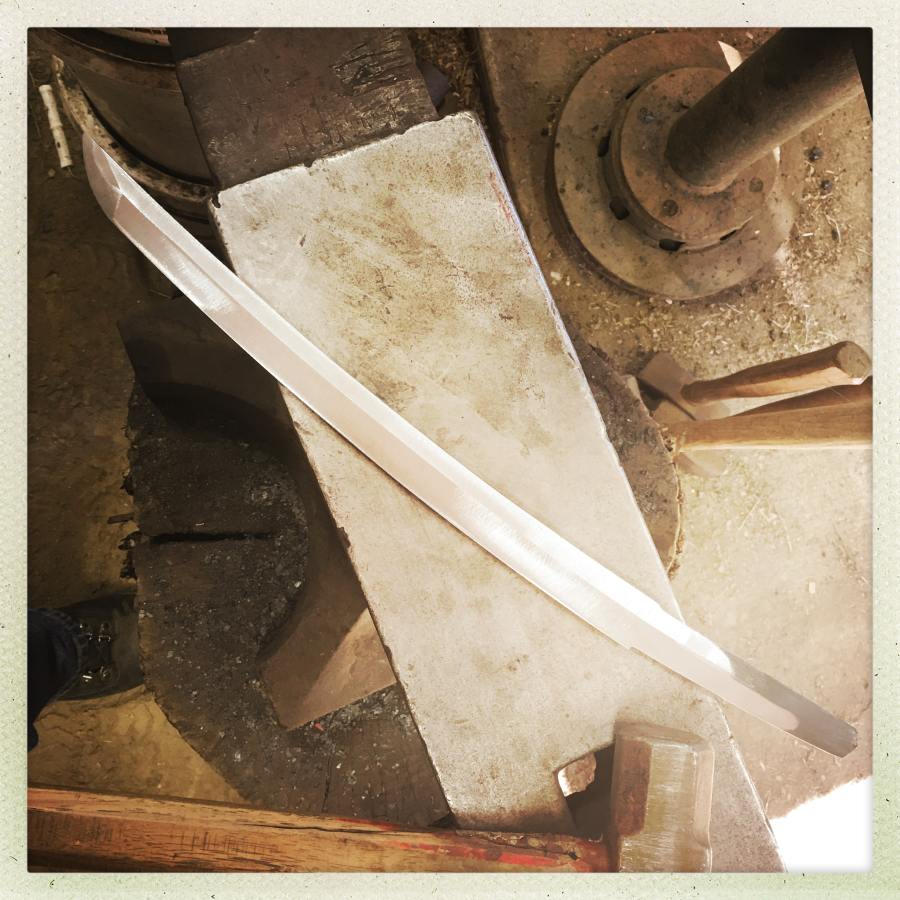 Most of the grinding was done with 38-grit belts, which remove metal fairly aggressively. They also remove flesh and fingernails fairly aggressively; at some point I brushed the edge of my right index fingernail on the belt and now there is a neat flat spot. Another fraction of a second and there would have been a slightly hot, very bloody hole.

When the blade has been evenly thinned down so that the edge is very straight and thin, but not sharp – it’s about the thickness of card stock – it’s time to switch to a finer grit: 80 grit. The 80 grit belt doesn’t remove metal as fast but it has a different effect: you can see every mistake much more clearly. So it’s back to the grinder! 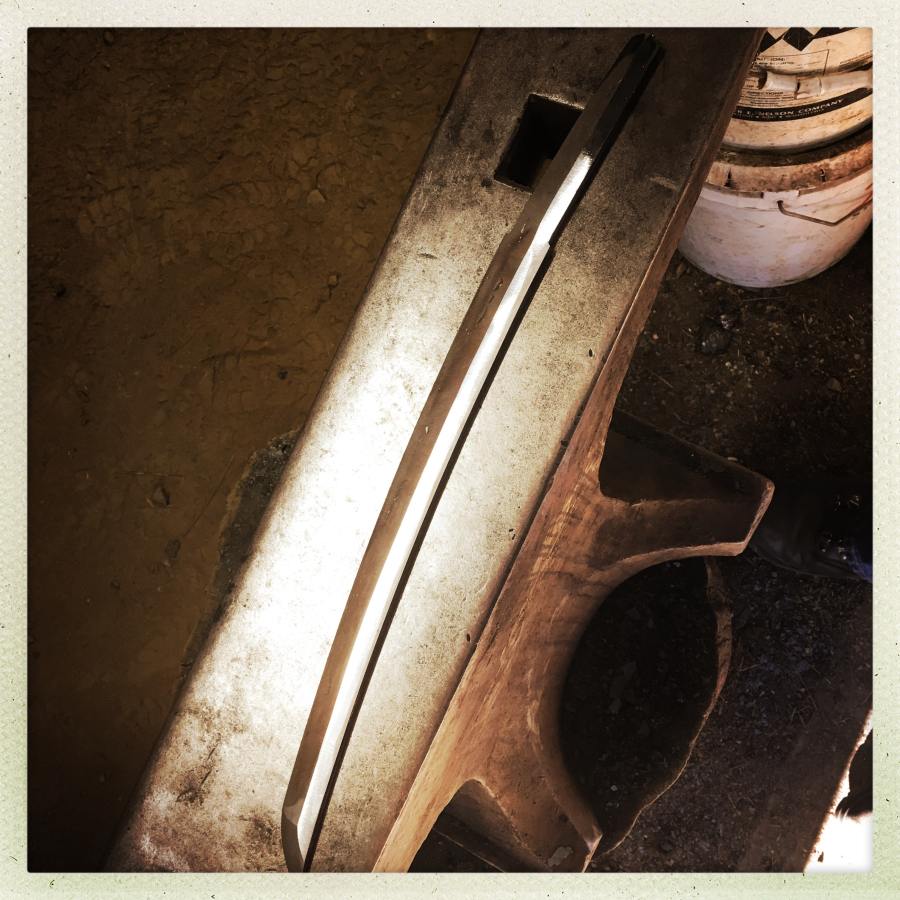 (That’s a bit of water back by the tang – not cracks!)

It’s pretty exciting. It’s beginning to look more and more like a samurai sword blade. Now, for fun, scroll back to the top and look at the curvature difference between the quenched blade and the forged blade. When you look at the blade, unless the grind marks are aligned, it becomes very easy for the different orientations of the grind marks to fool your eye about the blade shape.

Tomorrow we’ll be doing a bit more clean-up grinding using the 80 grit belts, then switching to stones. It’s an endless process of refining the lines and buffing out scratches. Several times, when the blade came right off the belt, I could see the temper-line on the edge, and I’m very, very happy with it.