My day began with a bit of panic. Where are my car keys?

I loaded up and was ready to go and I couldn’t find the keys. There’s a security key-fob system that lets the car know the keys are nearby so I can tell by process of reverse elimination that the keys aren’t on me, not in a pocket, not in my briefcase (which is in the trunk) or my camera bag. After too much scurrying about I deduce that I must have left them when I was fixing my coffee, and walk cooly back, pick them up, and depart.

There’s always a bit of “get to know you” to do, first, which I enjoy. Especially because Samson, a big black shaggy shepherd-dog puppy (about 100lb) takes a liking to me, and presses up against me while insisting that his head is badly in need of rubbing. I take a liking to him. 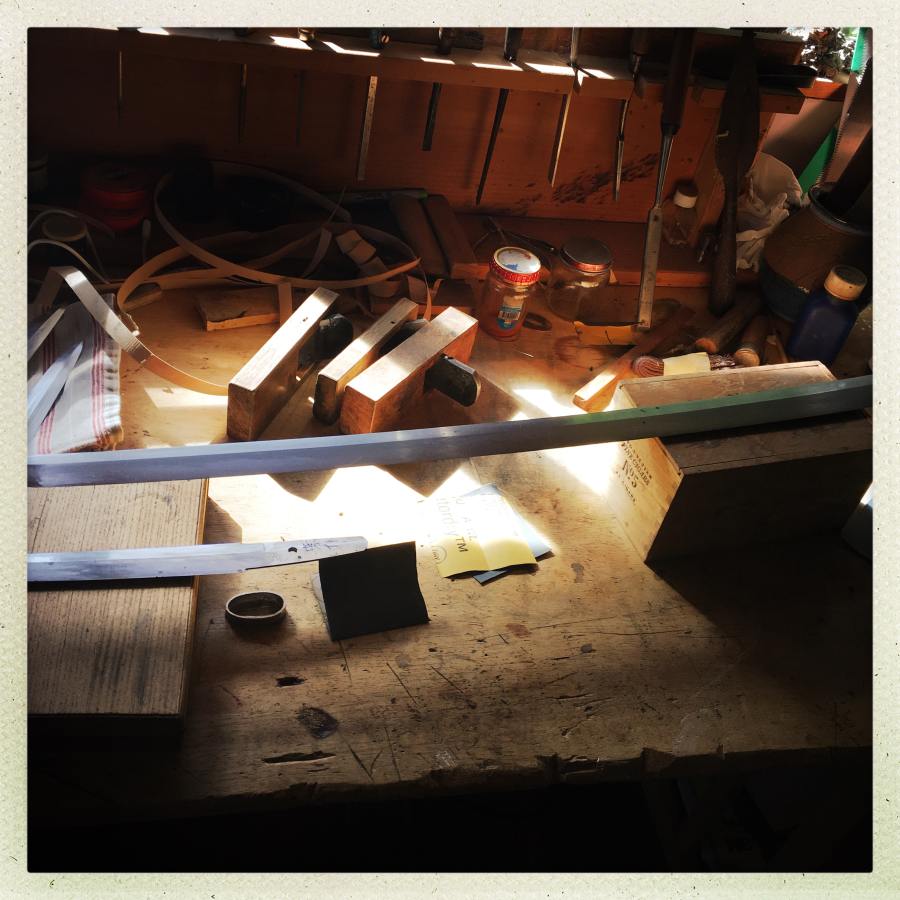 There are a few outbuildings; an office/polishing area and the forging area, where “dirty work” is separated from the clean work. Blades of various types and in various states of completion are all over the place.

I was surprised (and very pleased) that the work is not extremely kinetic. There is a lot of “wait for metal to heat” then hammer on it, think (as it cools) where it needs to be hammered on next, and put it back in the forge to heat again. You get a few whacks in and the thermal mass of the anvil starts to suck the heat out of the steel. It’s easy to see where the contact-points are between steel, anvil, and hammer – they cool faster.

We’re making short sword-blades (something between a small wakizashi and a long tanto) out of welded cable. The cable-welding set-up is done by Gabriel Bell, while we watch and observe the technique. 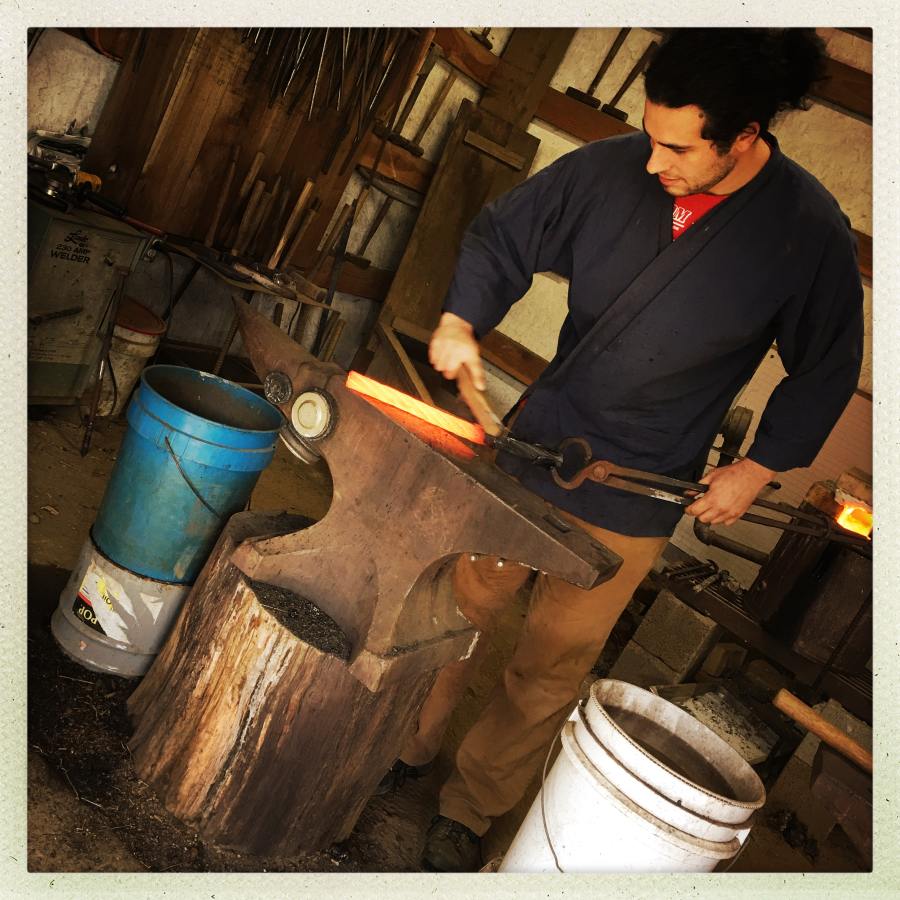 To start, Gabriel chopsaws off about 17″ of steel drag-line cable; it’s the same stuff that’s all over Pennsylvania from running strip-mine drags – out in Oregon they use it for moving trees. The cable is made of groups of wire that are twisted, and then those groups are twisted into larger groups. I didn’t count the groupings or number of individual wires but I’ll try to do that tomorrow.

The cable is cut, brought to close to welding temperature, and “soaked” in the forge for a while to burn off any oil, zinc, or whatever else might be stuck in there that’s not steel. Gabriel brushes it down with a steel brush, and keeps dumping borax (flux) onto it to melt and fill the spaces between the wires. When it’s brought up to temperature the flux will replace air, then squish out of the way, allowing a nice clean weld. At this stage the cable is still recognizably cable, though it becomes flexible and soft – about the consistency of thick taffy.

A first step toward welding is made by taking the near-welding temperature cable, clamping one end in a vise, and twisting it tighter with a big pair of pliers. 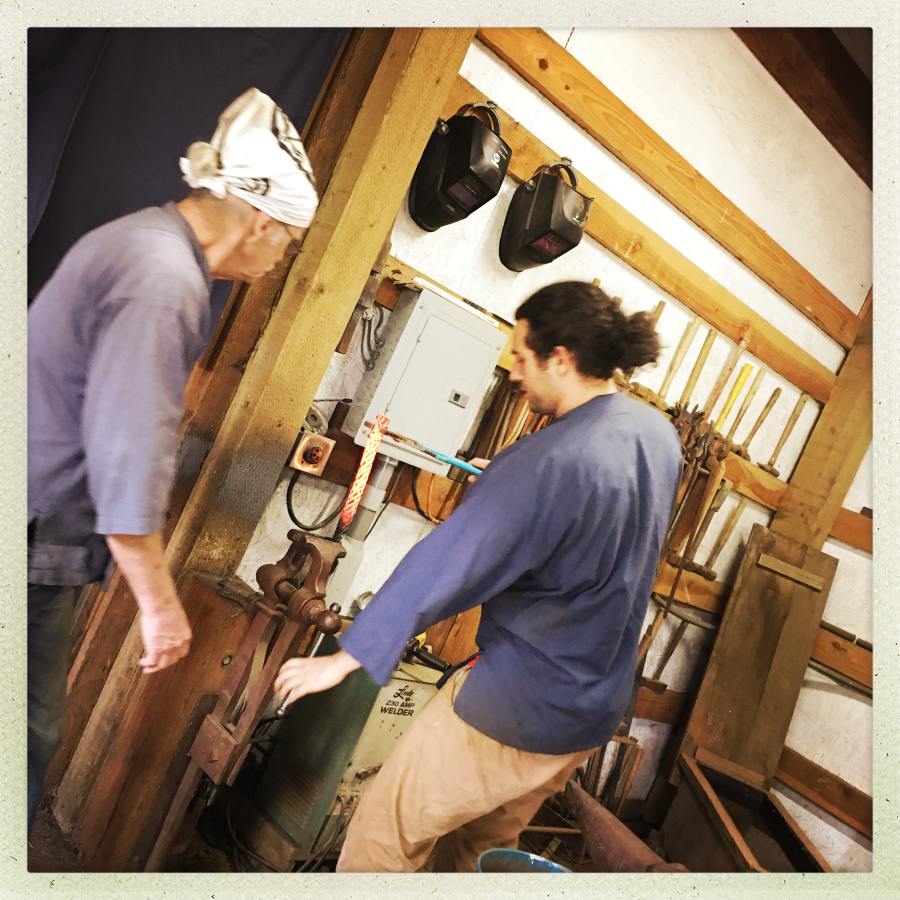 Once it’s all cleaned, fluxed, and tightened, it’s taken over to the trip-hammer and mashed. That’s not the technical term for it, but it fits. 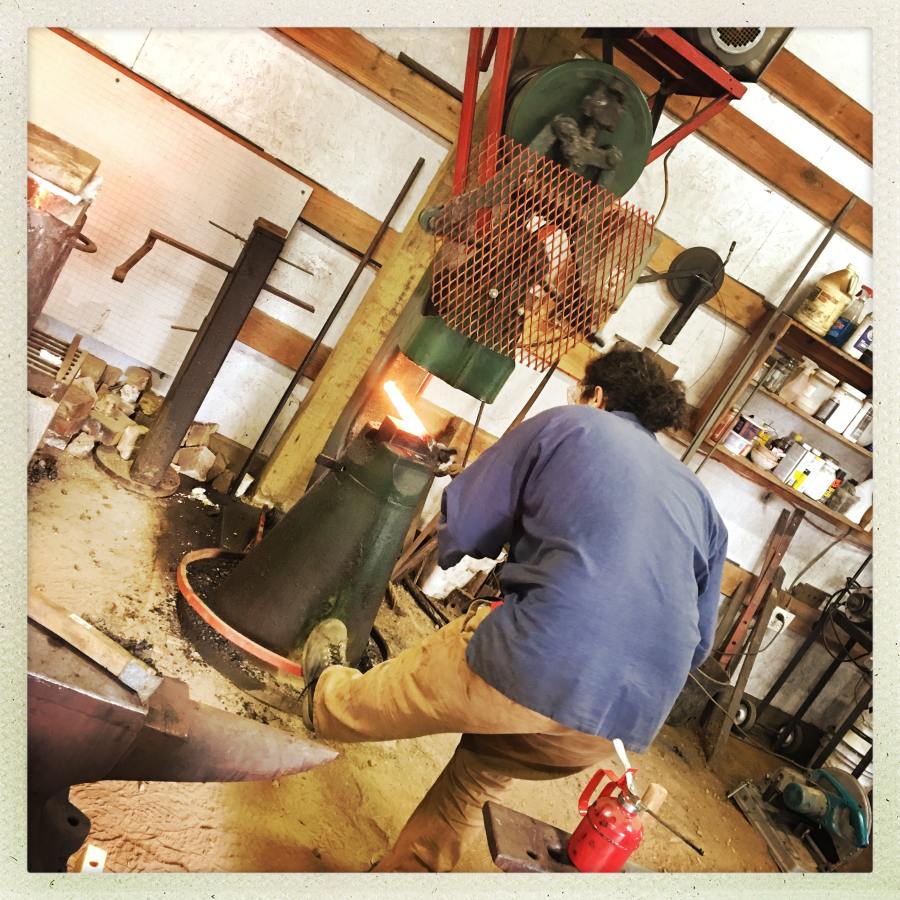 The trip-hammer is an awesome beast; we students don’t use it. Not because it’s particularly dangerous, but apparently it can be damaged pretty easily if someone pulls the metal out before the hammer hits (so it’s hammering itself) – the bar that’s being welded acts as a cushion. It’s pretty cool; you can feel the whole floor pulse when the hammer drops. 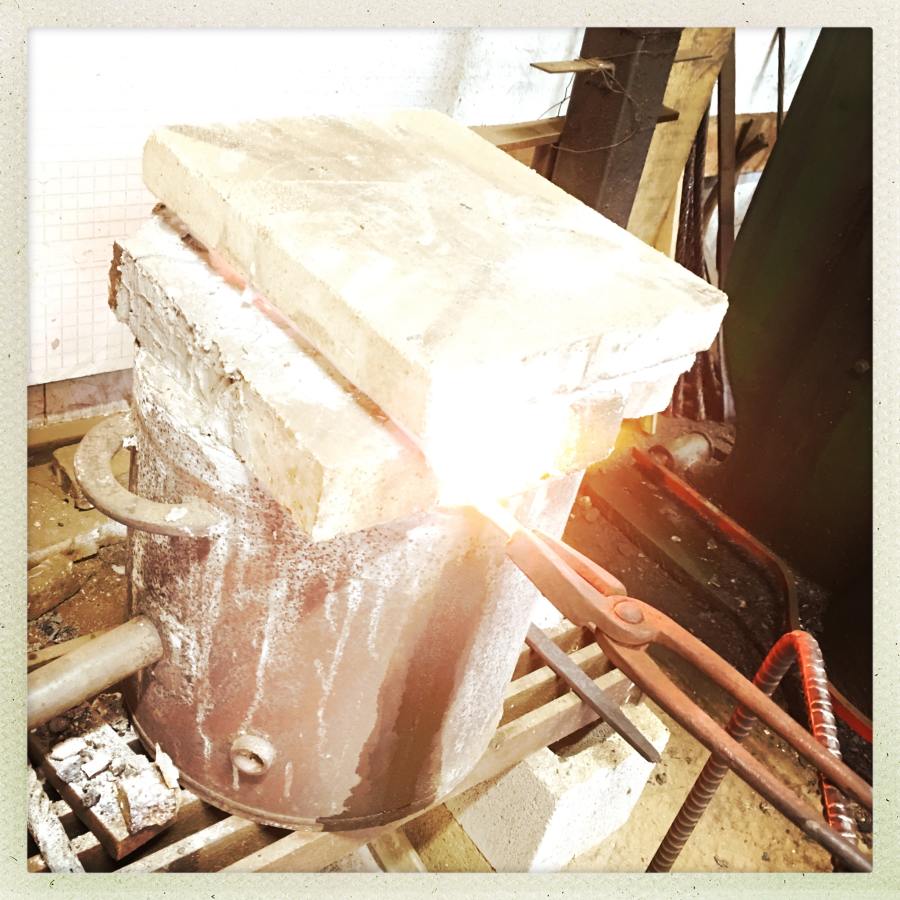 Smiths are pretty big on making their own tools; the forges we’re using are hot water heater tanks that have been cut and fitted with a propane/oxygen mixer and lined with refractory cement. The bigger machines like the trip-hammer are precious industrial-age sandcastings; nowadays most blade makers are using hydraulic presses that provide pretty much the same distortion on the metal but without impact.

When the cable has been trip-hammered into a bar about 19″ long, 1″ x 3/4″, everything gets turned off and shut down and we break for lunch.

The next step is cutting the bar in half and each of us gets a piece to work with. Now, I’m not taking pictures because my hands are busy, though I have the 5D on a tripod controlled by my laptop, shooting 20 second time-lapses for most of the afternoon.

It’s a motor skill that simply has to be acquired; figuring out exactly the right angle to tap and where, to squish the metal a little bit. You also have to hold the metal right in your tongs so it doesn’t leave, and you have about 4 seconds to figure out where you’re going to work it next while you’re lining it up on the anvil, then 10 seconds to drop 6 or 7 good whacks in the right place(s), and it goes back into the heat. When you start to bring the bar into a more blade-shaped wedge, that thins the edge, which puts lengthwise pressure on the bar, so it curves. It feels frustrating because you can lay down a good line of whacks and the blade suddenly looks a whole lot worse until you straighten it (after re-heating) and notice it’s gotten a tiny bit longer and wider and thinner. The changes are slight, and take time, so it’s clearly a matter of learning how to estimate your effect. It doesn’t help that the steel looks very different when it’s red hot than when it’s just very hot; you can see the line of the edge that you’re hammering in much better after it’s too cool to hammer it any more. 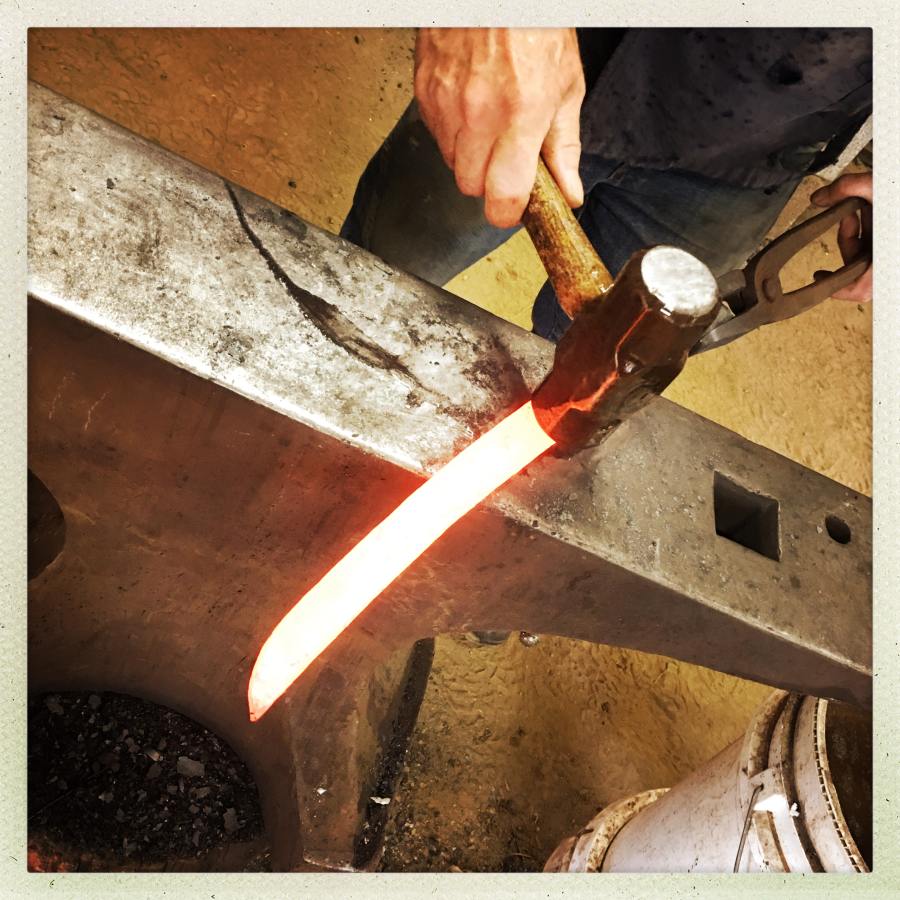 After a couple hours of whacking, it starts to look more like a sword. That’s a relief.

The teaching process is interesting (I don’t think it’s possible to do it any better) Michael or Gabriel will tell you, “Alright, now you need to hit it here, to push the metal this way, which will make that piece there move a bit that way.” There’s a lot of pointing and waving at red-hot metal, but you can’t exactly handle the stuff, so it’s all from a distance, with a lot of pointing and demonstrating. It’s nowhere near as kinetic as I expected; the pace is slow and thoughtful. Obviously, it’s necessary for there to be four of us working in the same space, so we had to communicate and watch what everyone else was doing with red hot metal. I concluded pretty quickly that, once you know what you’re doing, working alone is probably much safer.

I can see how, once you have a vague idea what you’re doing, it’s much more efficient to hammer-forge your blade into shape than it is to make a bar and grind the blade out of it. Historically, that would also make no sense at all – steel was valuable stuff that was hard to smelt and purify – one would not take a bar of fine steel and grind half of it to dust. Well, I would. But I’m trying to learn otherwise. I enjoy Michael’s explanations of how techniques evolved, historically to the present; I am just gobbling up the information. For example, I learned that early iron (‘bog iron’ and otherwise) wasn’t even as good as bronze, but tin became a strategic resource and iron came into use as an alternative, until the discovery that using charcoal instead of coal produced a high carbon steel that could be quenched to be much, much harder than bronze – and that was the end of the bronze age. As all these explanations flow over me, I keep boggling my mind at the unimaginable amount of trial and error that resulted in the first reasonable-quality steel swords. We also discussed the question of “how did someone figure the clever idea of smelting down iron-sand into iron?” (Answer: probably in the process of making glazes for pottery) This is an art form that has evolved in a great many tiny steps; it was not intelligently designed.

By around 4:30, with a great deal of help, we had managed to shape sword-shaped things out of the metal; the rough shaping is done. Tomorrow, we’re going to switch to using lighter hammers and making more precise shapings.

Coming down out of the creative clouds, I learned about the shooting in Las Vegas. We can ban the damn things; there are laws (in some states) regulating swords and knives – the only difference is that there is no knife-lobby. Otherwise, what about “bear arms” doesn’t apply to a lovely court-sword? In July last year, after another mass shooting, I proposed a straightforward public policy that would transition the US gracefully from a firearmed population into a civilized one [stderr]  – I still think my proposal is better and more sensible than the vast majority of alternatives I’ve heard. None of this stuff is going to go anywhere as long as we’ve still got the NRA. So: will someone please shoot those motherfuckers?