I gave up debating acupuncturists and other pseudoscientists, because it’s like fighting The Terminator: they keep coming back for more, no matter what you do. Pseudosciences have evolved protective layers of bafflegab that are so complicated it takes hours to resect them, and they throw up more bafflegab as fast as you try.

One of my favorite questions for acupuncturists and purveyors of alternative whatnot was “can I kill someone with this?”  That usually goes far enough outside of their normal line of reasoning that they may accidentally say something truthful tantamount to “it doesn’t work.” After all, if sticking a needle in my butt will make my heart better, what if you stick 4 needles there? If there’s a mechanism that improves something, that is the definition of “interferes with…” – anything that makes my heart work better can also make it work less well. I’ve only ever had one clever response to that line of reasoning, and it was a homeopath who said, “Absolutely! If you stop taking the remedy, you may die.”

A more practical question is “can I get high off this stuff?” If you’re offering me a natural palliative for pain – if sticking 2 needles in my butt will make my aching back go away – where can I stick 2 needles and trip like Trump? If you can kill pain, can’t you cause pleasure? I notice distinct absence of accuViagra: stick a couple needles in your penis and it’ll get hard, or something. If homeopathy worked, I could take some opium, dissolve it in alcohol (that’s called “laudanum” and it does work) and then cut it with water by a factor of 1:10,000,000 and I’d be stoned for years if I didn’t just burst into flames from the overdose, right? (that’s called “watered down laudanum” and it doesn’t work) 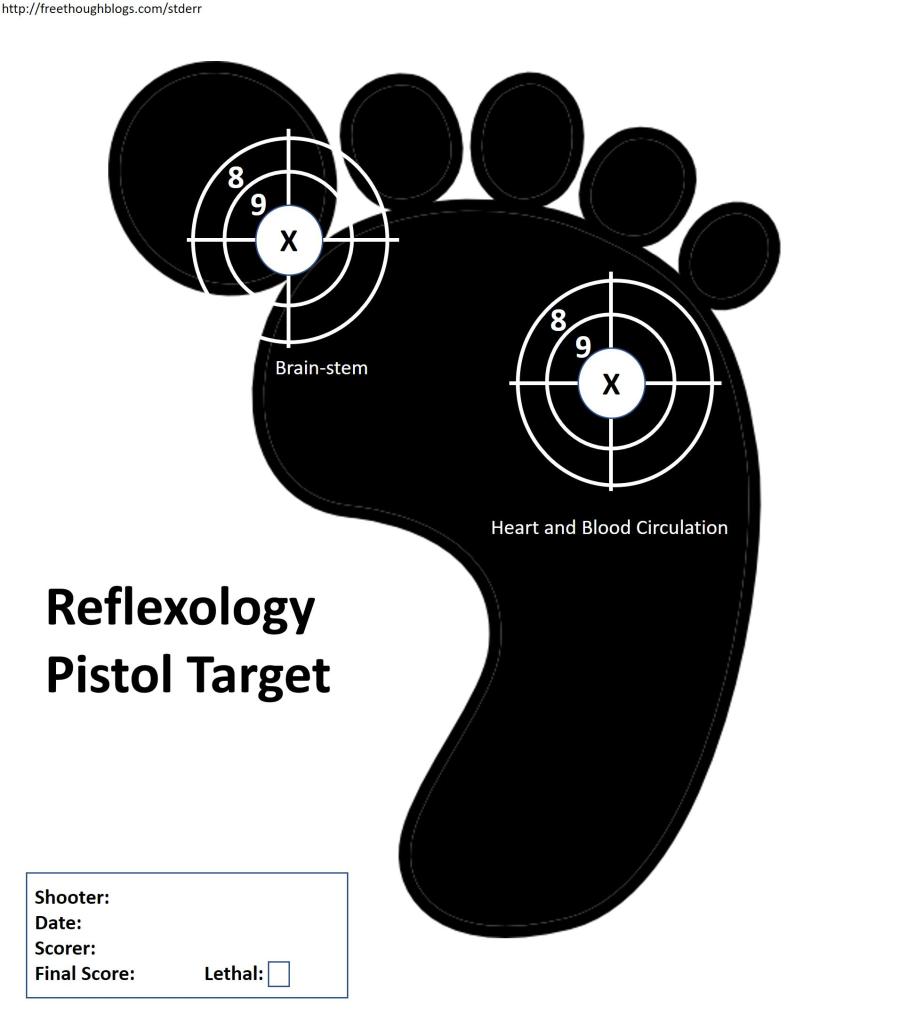 My mad photoshop and powerpoint skills

I think it stands to reason: if rubbing someone’s foot (coincidentally, in two spots that tend to get sore) can make their heart work better, and their blood circulate – an assassin’s bullet to the root of the big toe ought to be as lethal as a shot through the hippocampus.

It’s been years since I shot at a public range but I wish I could take a few of these and increase the surrealism level slightly.

The War on Drugs » « What on Earth do White Supremacists Want?