This posting has more Elite:Dangerous spoilers, this time regarding black holes.

Generally, I don’t like TED talks much, but there are exceptions. This one is pretty cool:

The part where she shows the footage of the stars orbiting Sagittarius A* – is so cool. She talks about the way that they calculated what the black hole’s accretion disk would look like, and are assembling an image of the black hole.

In-game there are regions of space full of old stars, that are black hole fields. If you can call something where the black holes are 200+ly apart “field” – in closer to human space there aren’t very many, to reflect the absence that we observe. 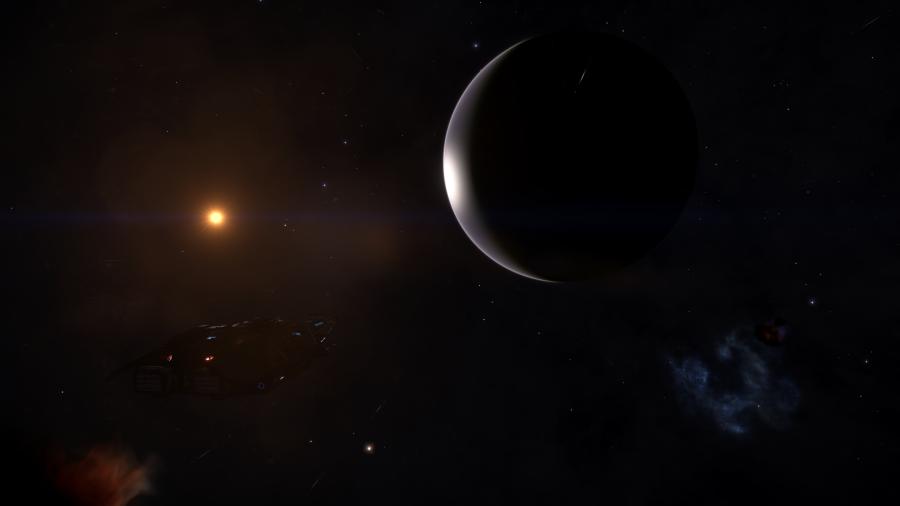 For reasons I can’t really explain, I find exploring to be incredibly relaxing. Once you do it enough, you realize that the galaxy is remarkably self-similar. “Oh, boy, another star.” But it’s not quite like that: the game engine builds them according to the most realistic model that Frontier can do, right now, and sometimes you find yourself in places that just make you pause and go “wow.” That’s a water world (with early forms of life!) that I stumbled across on my way to Tabby’s star.

Some of you probably remember Myst – I played it, too, and we were all amazed by the quality of the graphics. Those were images that took weeks and months to ray-trace on the hardware of the time. Now, with the kinds of graphics coprocessors you can buy for $500, you can do that in real-time. I know that the “current crop” of gamers have come to expect this, but my brain keeps gibbering “that’s not a cut-scene! that’s game-play!”

Anyway, I dawdled on my way out to Tabby’s Star, which means you don’t just jump in-system, scoop, align for your next jump, and leave: you park for a second and look at the system map: 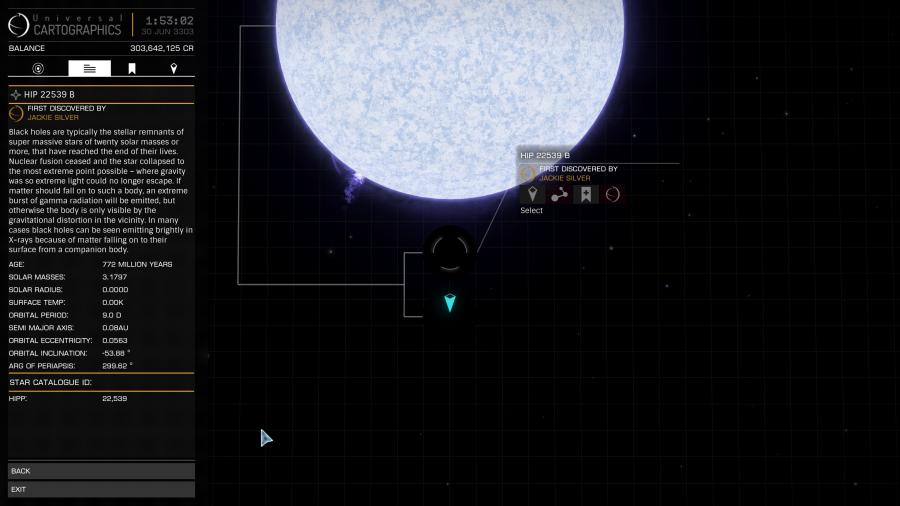 Jackie Silver was one of the first Elite explorers, he found all kinds of cool stuff. And he found this system, too. It’s a white giant with two black holes orbiting it, way out. What would it really look like in a system where there are two invisible monsters sweeping space around a giant star? Well, for one thing, they’re not really that close. I often get fooled when I look at the map and expect things to be right on top of eachother, but really they’re so far apart that they’re a dot in the distance.

Probably my biggest complaint about the game is that for a game called “Elite: Dangerous” it’s remarkably safe. If you fly straight at a gas giant, your computer will drop you out of supercruise (and you’ll take some damage) but you won’t be ripped apart and turned into a thin scum of compressed stuff on the surface of a singularity. If you crank through a system at 20C and pass through a gas giant’s ring, you’re not turned into a little squirt of plasma – your computer stops you and you take a bit of damage. I wish the game was more unforgiving, because part of the grandeur of a black hole is how unforgiving they are. In the video above, I flew within a few thousands of kilometers of the thing.

You know what’s the most dangerous part of the game? Parking. If you take too long docking in your assigned pad in a spaceport, the spaceport will open fire on you and blow you up to get rid of you – which is insanely unrealistic: who’d want chunks of a gigantic spacecraft exploding and whanging around inside their orbital?