I’m a moral nihilist, which is not to say that I kick puppies and punch grandmothers – it’s just because I am unconvinced by the attempts to establish systems of ethics that I’ve encountered, so far. I’m a fan of “the golden rule”, i.e:

“That which you hate to be done to you, do not do to another.”

In action a rule like that should probably be more tightly specified, maybe resembling:

Before you do something that affects someone else, consider how you’d feel about someone doing it to you.

That way, you’re establishing your rules-base efficiently – your rules only need to apply to choices you only actually encounter, and they do twice as much work. If I am thinking about how much I’d love to smear peanut butter in Tucker Carlson’s hair, I assess whether I’d be willing to have random strangers do that to me, and now I have a rule that works for me, Tucker Carlson, and random strangers. By the way, this gets me around having to take “trolley car” problems and hypotheticals seriously, because I can say, “I don’t know because I’m not actually in that situation.” Then the test-giver asks, “Yes, but imagine if you were!” and I can helpfully reply, “I can tell you that it annoys me to be asked this question, and I wouldn’t ask you such stupid hypothetical questions. Can we agree not to annoy each other?” One concern that arises from this is the degree to which situations are contextual, how specific the rule is: is it OK to do the peanut butter thing on Tucker Carlson, but not on Carl Sagan? That’s tricky, so I apply two other rules:

The conclusion of ethical reasoning should be as de-contextualized as possible.

The conclusions of ethical reasoning should be as broadly applicable as possible.

This makes conclusions (the rules generated) as useful as possible and saves me the trouble of having a bunch of rules that are a huge cascading chain of “if” statements. 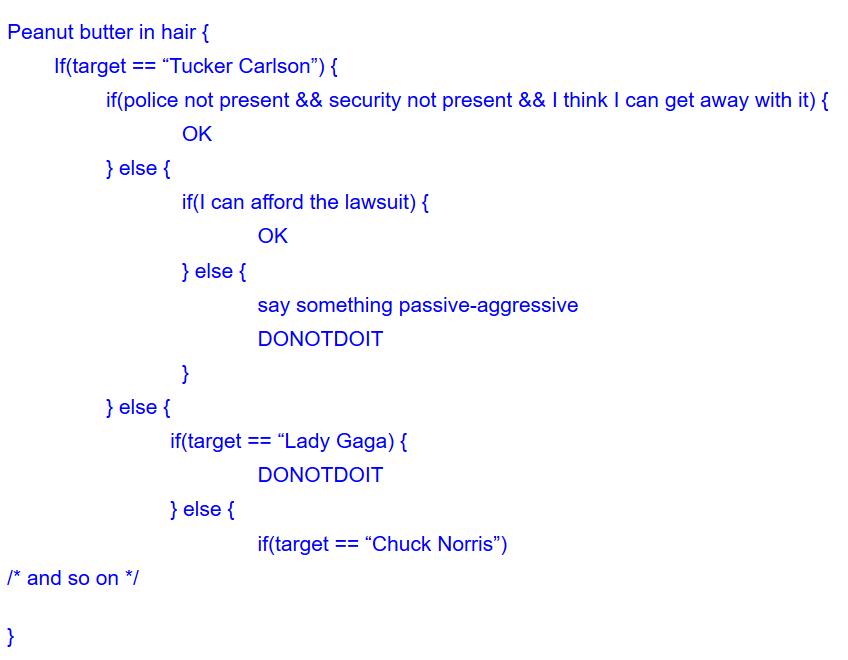 My sample rule above got a lot more complicated because I was adding a lot of exceptional cases. The fiddly code around police presence and lawsuits are an example of the additional rules that come in when we make our rules context-sensitive. Keeping it simple makes it easier. It also makes it easier to communicate with others because you can tell someone “don’t do that” and you don’t look like you’re the kind of cowardly creep who’d put peanut butter in a wimp like Tucker Carlson’s hair, but you’re scared of Chuck Norris. (That then invokes a “do I care what people think about my courage?” question, which results in another rule being developed or reinforced)

The reason you want to establish your ethical rules before they’re invoked is because, rather obviously, you might smear peanut butter in Chuck Norris’ hair and find out later that Chuck Norris can punch pretty hard. The ordering “think, then act” is probably a key hallmark of “intelligence” (whatever that is) because it entails quickly building a temporary model of how the future may play out – the accuracy of that simulation determines our ability to predict the future. If my future model isn’t very good, I might predict that Chuck Norris will be amused  if I do the peanut butter hair thing, and I could make a life-changing mistake.

If you’re still with me, I’ve already argued that de-contextualizing the rules makes them more efficient by making them less complex. One of the crucial contexts that I didn’t mention is: time. A pretty efficient rule is “Chuck Norris never likes peanut butter in his hair” and an even simpler, more efficient rule is “Nobody likes peanut butter in their hair.”   Although if I’m a secret peanut butter hair fetishist I might have an exception like “Generally nobody likes peanut butter in their hair but if you can figure out a tactful way to ask and they seem to like the idea, then go for it!”   And that’s how we deal with consent and signalling: we add another layer of interaction into our model of the imaginary future. So I imagine Lady Gaga’s eyes shining like stars reflected in pools of rainwater when I ask about the peanut butter and she huskily whispers, “yes… how did you know?” and I ask her, “chunky or smooth?” and she says “chunky” and I like smooth.

Moral nihilist that I am, I not only am unconvinced by philosophers’ attempts to construct moral systems, I am skeptical about other people’s claims regarding their own moral systems. In the model I describe above, you can see that someone’s rules can be arbitrarily complex; there can be an ‘if ( )’ statement that they didn’t tell me about. In fact I assume that there are always an infinity of ‘if ( )’ statements that other people aren’t even aware of, because they do like I do, and they build their rules on the fly when they actually encounter a situation and have to deal with it. Then there are people I consider “inconsistent” who forget their derived rules and don’t try to be context-independent: they’ll do whatever they want in a situation and claim that the details of the situation warrant it. That makes them harder for me to model in my imaginary future universe, so I am uncomfortable around them because they are unpredictable and therefore dangerous.

All of this diversion is because I was fascinated by some of the Democrats’ reaction to the Republicans passing the Trumpcare draft. Apparently a few of them sang “na na na na, na na na na, hey hey, goodbye!” at the Republicans (implying that they’re going to lose the midterm elections and their jobs along with it) but the reason they did it is because some other Republicans did the same thing to some other Democrats years ago. Therefore, they were doing second-hand retaliation against a secondary party. [washington post] 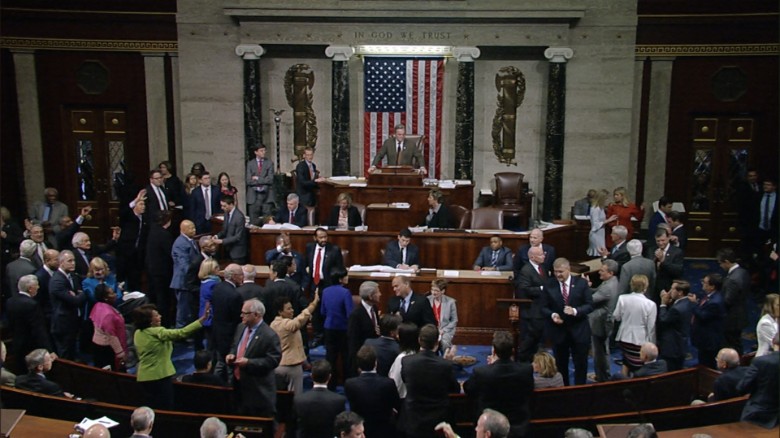 The CNN caption for their article about it was “thirty one seconds .. that show why people hate politics” [cnn]. The CNN title is wrong: it’s 31 seconds that show why rational people doubt that politicians have any morals at all. This sort of thing demonstrates the extreme ethical inconsistency that results from bending your views to meet a partisan agenda. (The rule for that looks like: “if my party is wrong, OK. if my party is right, OK.” And if you ask some of them they’ll tell you they are moral people who got their rules from god or whatever.

That’s what I mean by “inconsistent” ethical systems: if it hurt the earlier Democrats’ feelings, then the earlier Republicans were a bunch of assholes. So the later Democrats were being a bunch of assholes – perhaps worse, because they were retaliating on behalf of someone else, using methods that they apparently had already established were the methods of assholery. Or they reverse-established that it was OK all along for those earlier Republicans to mock those earlier Democrats; that’s why my concern for time-as-context in ethical systems comes forward.

There’s another rule that gets translated as “two wrongs don’t make a right” which translates into my mind as “in order to do something to someone else that would hurt you if they did it to you, you have to add a lot of exceptions to your rules, thereby increasing your own rules’ complexity tremendously.”  In my mind, that equates to inviting an eventual breakdown in which your rules become so complicated that you blow them away with a sulphurous blast of air from hell and adopt the rule most politicians seem to follow:

Do as thou will’t shall be the whole of the law.

Yes, I know I used a variant spelling from what Crowley used, which is probably uncool since it’s Crowley’s dictum in the first place. I make an exception by allowing myself to do that, because I want to: checkmate Aliester.

Before anyone worries that I take Crowley seriously: don’t fear for Marcus. I know he was a complete bullshit artist, a victorian Deepak Chopra who used goofy mysteriousness and deepities to get a lot of sex and drugs. Chopra has a lot of Jaguars, so I tend to appreciate Crowley more. He was a colorful conman and, given the current politics, I would have preferred to see him as president. At least he was articulate. [ac2012]

This posting is a long rambling roundabout argument for why “sauce for the goose” works as an ethical rule for this particular moral nihilist: it’s easy to flip a rule around. If you do that, you only need half as many rules! WIN! “Exceptionalism” is complexity, unless you do like Trump does and collapse it all down to “whatever I say is the whole of the law.”

Note: I do not actually fantasize about putting peanut butter in Lady Gaga’s hair. Sometimes when you’re searching for an example, you come up with a bad one. And, Chuck? We’re good. Right?

Monday Meslier: 122 – The More Ancient and General a Religious Opinion is, the Greater the Reason For Suspecting It » « Macron’s Emails, Bien Sûr