Here are a few more in-game shots of touring around a few places near Sol system. 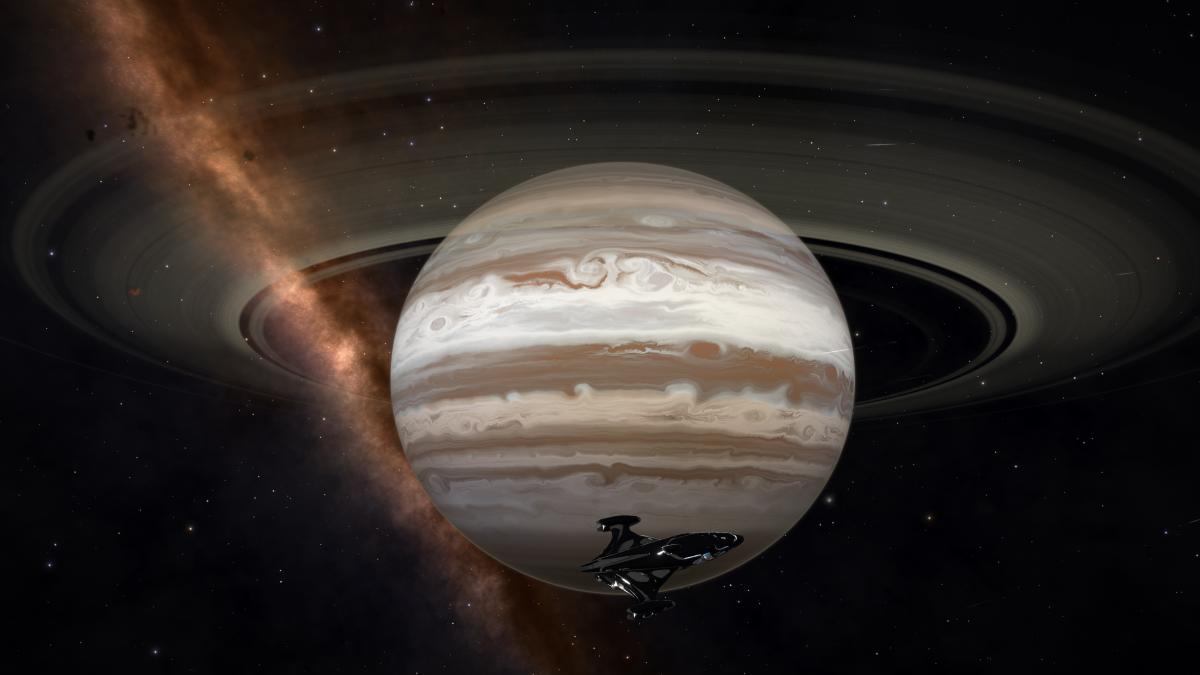 Elite’s set in 3302AD, the ‘big red eye’ storm on Jupiter appears to have dissipated. Or maybe it was on the dark side. They got Jupiter’s rings right, it seems.

Some parts of the galaxy are surprisingly accurate. Players have been known to calculate the position of the moon, or Mars, around the sun based on the date in 3302 and it’s in pretty much the right place.

Some planets (airless and lifeless only) are landable, and you can tootle around on the surface in a Surface Recon Vehicle (SRV). The whole art of noodling about in SRVs has gotten pretty advanced. There are groups that hold insane canyon-races on low gravity planetoids with rough surfaces; you get a few commanders in ships to land and mark the way with the ships’ headlights, then line up and go! 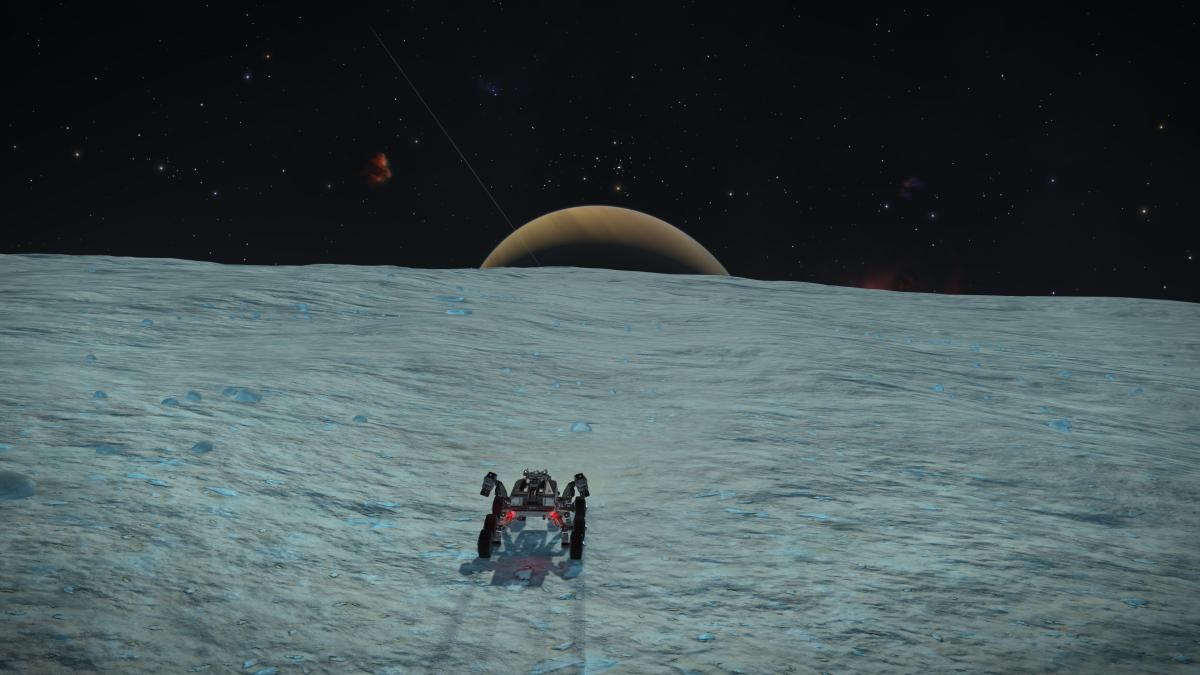 I’ve never experienced a game that made me feel small, before. I think that’s one of my favorite things about it. I made a trip (it’s sort of an in-game rite of passage) the the supermassive black hole in the middle of the galaxy – Sagittarius A* – and was one of the first couple hundred players in the game to get there safely. Since that time, exploration has gotten considerably easier, but it was an accomplishment of sorts: a few hours of flying and noodling around every day for 3 months and I eventually covered 25,000ly from my home system to the core. Where I did the obligatory “selfie” with a supermassive. 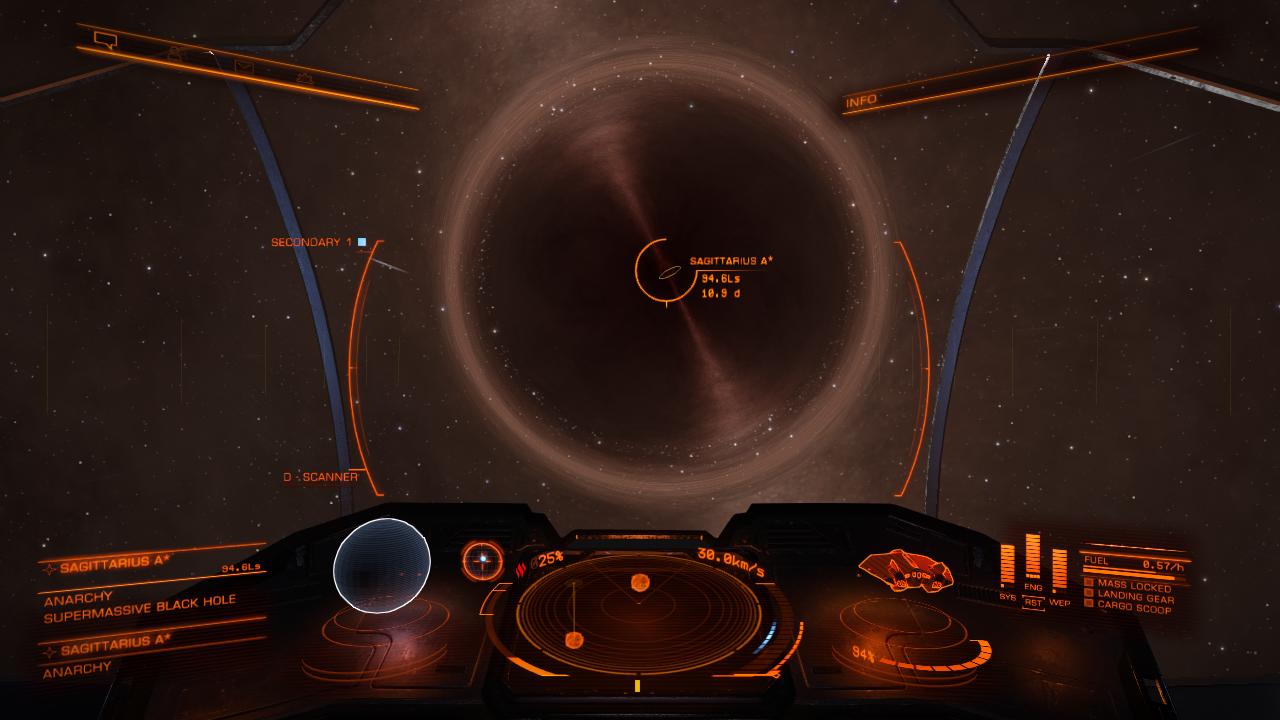 All I can think about is “what would I smell like after 2 months in the command chair?” 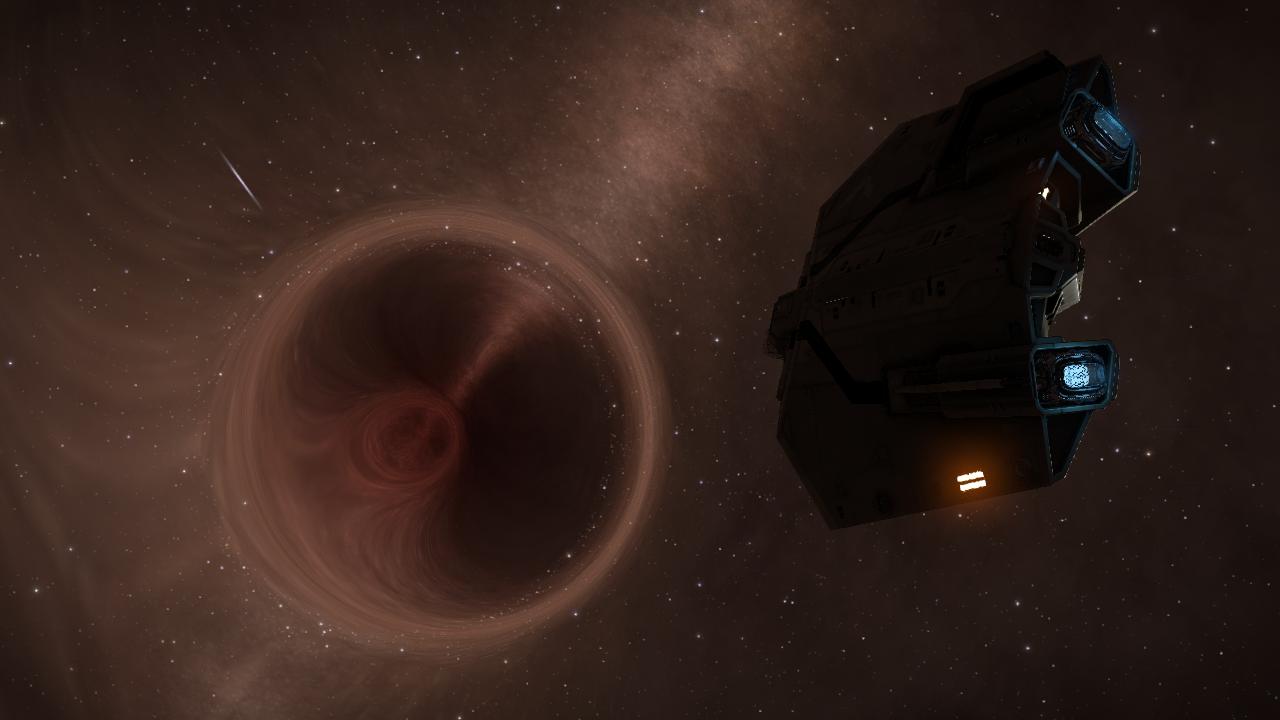 The game’s star-map generator builds a stellar background based on the surrounding map. It’s uncanny – one time, I had discovered a blue giant star (I was the first person to find it and visit it) that was this great blue blob on the galaxy map – when I was about 5 jumps away, I started to see a blue dot in my general heading. Another time I saw something interesting in the background and started jumping toward it until I realized it was Andromeda. No, I wasn’t going to make that trip.

The shape and density of the galactic star-field changes; by the core, it’s just a radiant pool of stars in all directions. Other players go high and far and try to get pictures of the galaxy edge on, from the very edge – it’s just a line of mist. It’s a little sobering when you “fly” for a day and manage to cover a pixel’s distance on a map. 300 billion stars doesn’t mean much until you decide you’re going to visit a few of them.

Frontier have been adding stellar effects and objects. There are fumaroles on Enceladus: 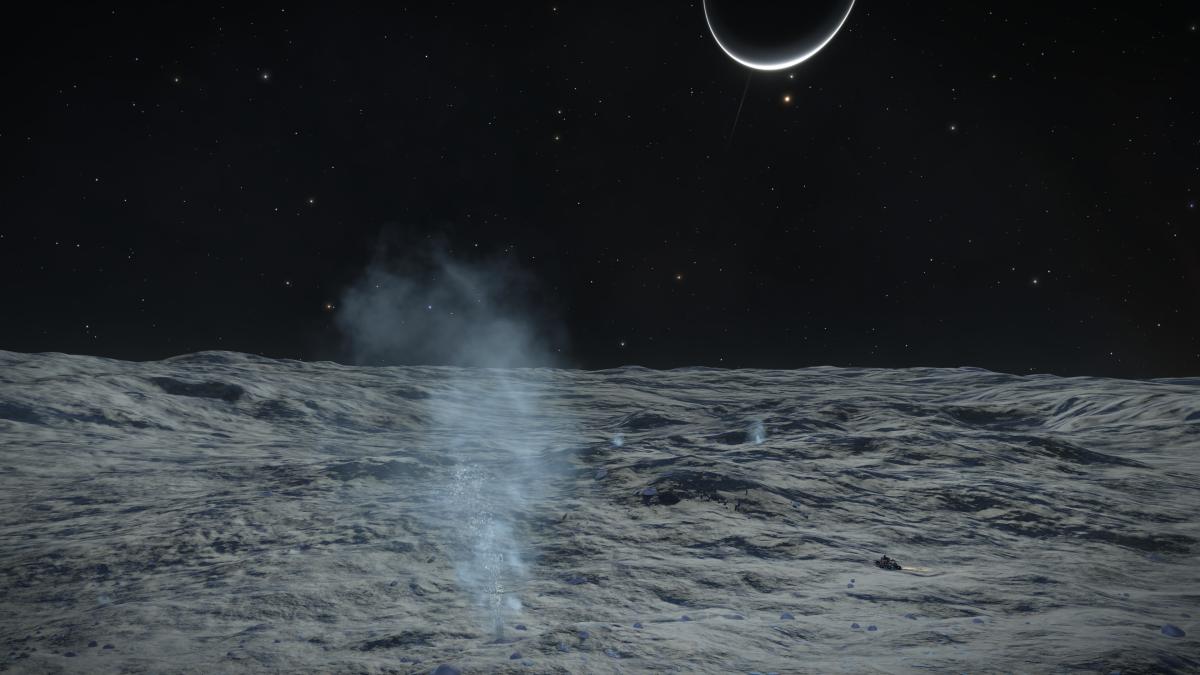 And white dwarfs with jets. 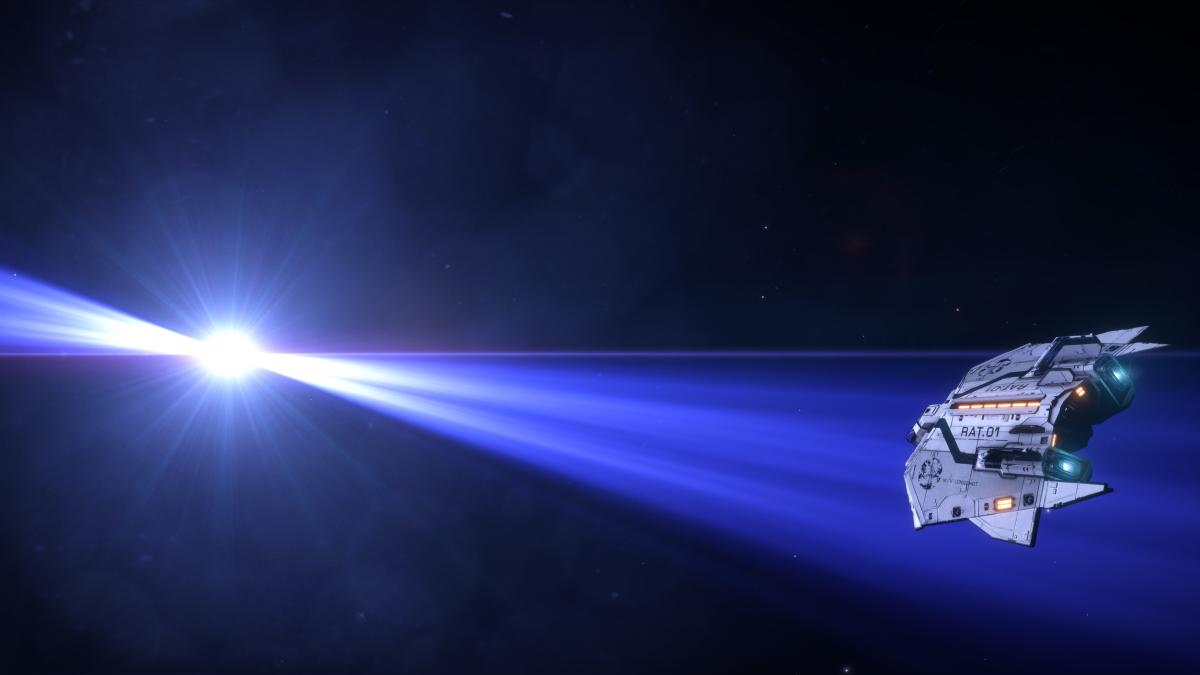 Hey what happens if I fly into that?

There are some aspects of the game that drive me completely nuts. For one thing, the way they treat technology evolution is downright silly – it’s straight out of World of Warcraft: to get certain drive upgrades or weapons tech, you have to run pointless missions for some faction. That demonstrates a complete incomprehension of how economics works: if a certain faction needed a commodity, the price would go up slightly and people would haul it there. There is no need to ask Commander Badger to go get platinum, when Commander Badger can just give you the credits you need to buy the platinum.

Also, the jets on the dwarf star – those are, what, plasma shooting out at relativistic speeds? There isn’t a thing in the universe that would want to fly into one of those. But in Elite, if you do, it supercharges your jump drive and you can make longer jumps. It may as well be a “potion of jumping excellence.”

I have a few beautiful “finds” in my snapshot archives. I found one system with two primary stars that were in contact. I would expect that in real life that would look pretty dramatic and would be nothing like I’d want to see from 100ls away. I found a planet with life orbiting a black hole. I found a dwarf star that was spinning so fast it nearly made me sick. 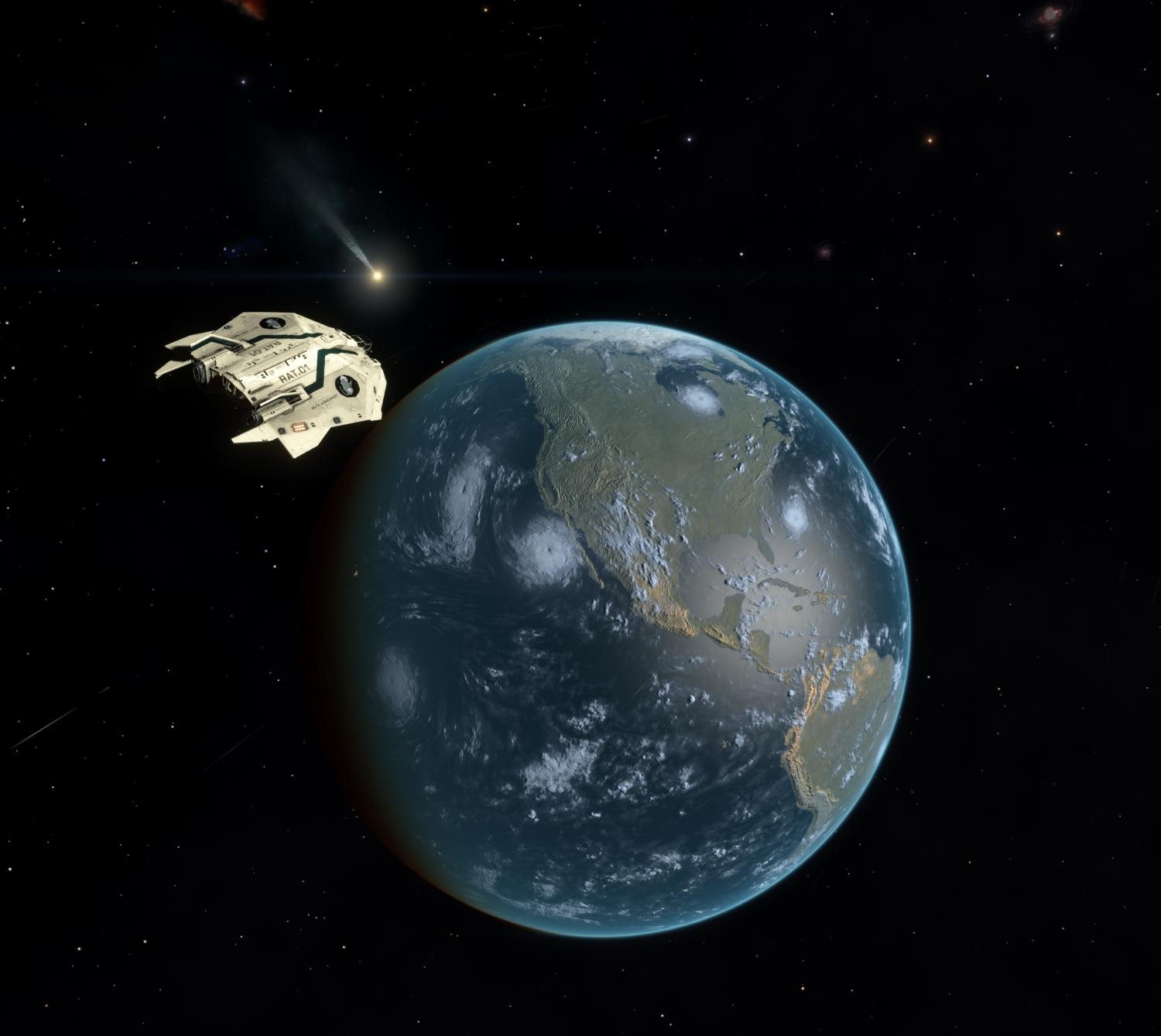 I can see your house from up here!

Looks like a great big old hurricane is going to hit Baja California. And humanity must have reversed the global warming because it looks like the planet still has the same coastlines. Florida is still there! I wonder what the ruins of Mar A Lago look like?

In the picture of Earth, that flare-like thing above Longshot‘s cockpit is the drive-flare of another ship. Someone else was out there playing tourist at the same time I was. Often, players are friendly when they encounter eachother, but there are always the sociopathic fringe that attack anyone they meet, on sight. I find them problematic and usually amuse myself by running away from them slowly for a while, to waste their time, and then I really let rip and leave them chasing my dust.

Where the Plutocrats Go To Milt » « Executions in the US