There’s an in-depth profile of Steve Bannon over at The New Yorker, [newyorker] which refrains from the “ooh, he’s a genius of strategic darkness” meme, and goes into some depth about his history as a Hollywood Big Shot (spoiler: not much big) 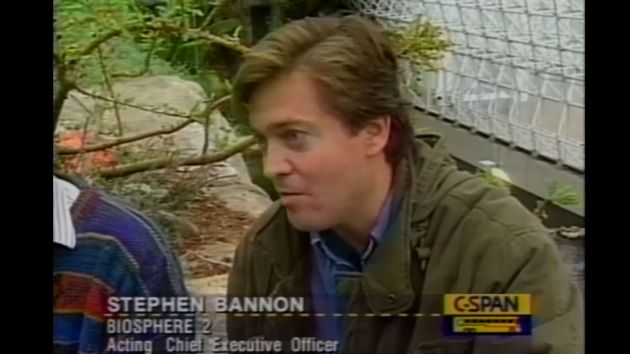 To me, he doesn’t seem like a brilliant deal-maker: he’s knocked around, and gotten his fingers in lots of pies, and managed to get very rich in the process. I’ve had the displeasure of dealing with people like that, many times – mostly venture capitalists and investment bankers. In America, the most validating thing that can happen to you is to get rich. And, when you do, suddenly you attract a small flock of butt-kissers (who are after your money, or your rolodex) and then you’re important in addition to being rich. Suddenly you can forget that you once were ignorant and made mistakes: now you have people who make mistakes for you.

The “Seinfeld” story first became widely known after the Bloomberg Businessweek profile. Bannon said that, in 1992, Westinghouse Electric hired Bannon & Co. to sell its small stake in Castle Rock Entertainment, a TV production company. It soon emerged that Ted Turner was interested in buying all of Castle Rock, including its minority shareholders. Bannon advised Westinghouse to accept Turner’s offer, which included an interest in a package of several Castle Rock shows.

Bannon claimed that the Westinghouse executives told him, “If this is such a great deal, why don’t you defer some of your cash fee and keep an ownership stake” in that package? He agreed. One of the shows was “Seinfeld.” “We calculated what it would get us if it made it to syndication,” Bannon said. “We were wrong by a factor of five.” Bloomberg Businessweek said that Bannon continues to benefit from “a stream of ‘Seinfeld’ royalties.”

Some of those who were responsible for “Seinfeld” became agitated by Bannon’s story. Larry David, the show’s head writer and executive producer, told me, “I don’t think I ever heard of him until he surfaced with the Trump campaign and I had no idea that he was profiting from the work of industrious Jews!” Rob Reiner, one of the founders of Castle Rock, has said of Bannon’s profits from the show, “It makes me sick.” [newyorker]

Getting lucky by owning a chunk of Seinfeld after someone suggested keeping an ownership stake: right place, right time. Hollywood, business, the start-up scene, tech – they’re all full of people who thrash around for a while and sometimes make the right decision or know the right people. For every one that makes the right moves, there are fifty that don’t. Catching (or being missed by) a golden bullet is more or less random, and when we do catch a golden bullet our 20/20 hindsight makes us out to be the geniuses that positioned ourselves in the path of opportunity.

He sounds to me like he’s not really that ideological: his drives are money, power, selfishness, and self-importance. In that sense, he fits right in with the rest of the deplorables in Washington. Humanity produces an endless stream like this and they mostly leave very little mark on history unless they screw things up particularly memorably.

One of the funny things about venture capitalists (and I expect Hollywood types are similar) is you run into these guys who’ve caught a golden bullet and then suddenly they’re geniuses. I met with one guy who was the college roommate of the founder of a hugely successful start-up, who got some stock by helping do some basic systems stuff when the company first started. So he got out with $50m in his pocket, and spends his time eating lunches in nice restaurants on Sand Hill Road (god, if I ever have to eat at Il Fornaio again, I may just hang myself!) and lecturing people who’ve actually done stuff about how to run a business. I remember one lunch I had with a venture capitalist and a Greek immigrant who had funded his first business by carrying yoghurt his mom brewed to Greek restaurants all over town on a bicycle, who taught himself how to code in C, assembled a server out of parts his friends were getting rid of, built a product, sold it, and executed a flawless $24m exit. It was only a decade or so of relentless, hard, all-hours work. So I have to sit there choking down the urge to reach out and snap this venture capitalist’s neck like a pencil, while he’s lecturing the other guy about how “you should only work if it’s fun.”

I was talking to an old honky tonk musician once, and, he said, “those ‘overnight successes’ – usually it’s 15 years of hard work and then suddenly, overnight: success!” I don’t want to name-drop but the guy who said that was Ray Wylie Hubbard, and if Ray isn’t qualified to say that, nobody is.