I lose track of the number of times someone has called me a “leftist” because of my views on social justice, privacy, demilitarization, and opposition to weapons of mass destruction. And I have no idea how many times I’ve been referred to as a “right winger” because I own firearms and am generally suspicious of authority. But actually my suspicion of authority is suspicion of everyone, and it’s only authority that I worry about – and it all gets complicated. When I was in college and someone asked me to label myself, I sometimes would say “I am a radical righto-leftist.” That’s the sort of thing that seems funny when you’re a sophomore (hence the label: sophomoric) but, like most other labels, it wears out.

It was, in fact, the right/left divide that first led me into challenging the use of labels in politics, which led me to linguistic nihilism.[stderr] For the sake of this posting, let’s not go down into linguistic nihilism because then the words on your screen become nothing but meaningless goo goo gaa gaa, and there’s already too much of that going on in politics right now. 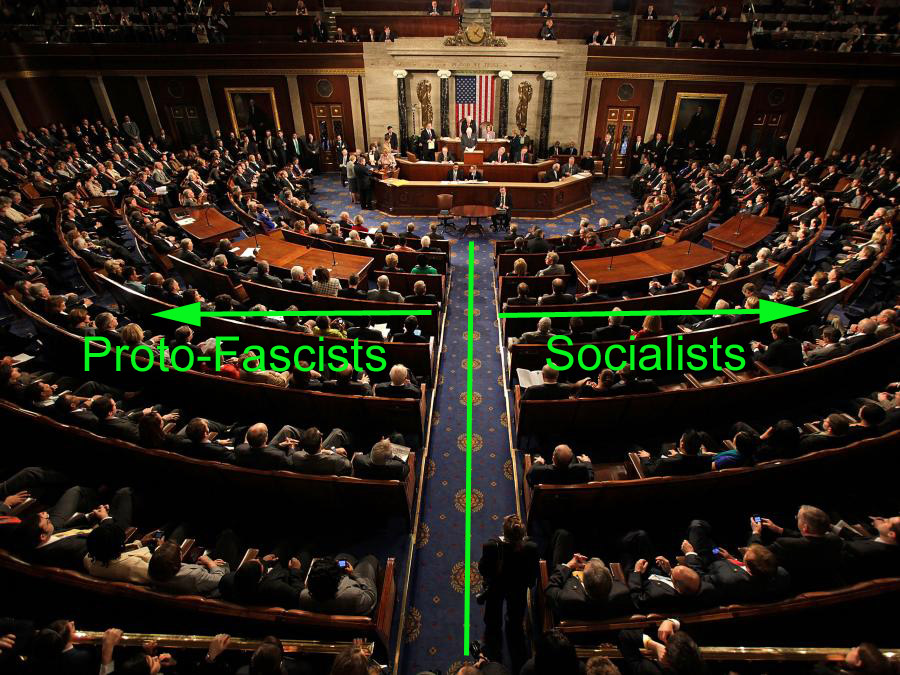 Have you ever been labelled as a leftist or a rightist? And, if you have, did you wonder where that comes from? Did you, perhaps, think it has something to do with which side of the Congress Hall you sit on. Of course, that’d be the Congress Hall in Philadelphia, not Washington.

Actually, it’d be which side you sat on in the Salle De Manege at the Tuileries in Paris, if you were participating in the various French attempts to construct a government before, during, and after the revolution. [wikipedia] There was a seemingly endless series of divisions, factions, purges, terrors, and counter-purges, so that it was confusing, and became useful for people to generally sit on one side of the room or the other to indicate where they stood against or for the prevailing establishment – which is a tricky proposition when you’re in the middle of establishing the establishment. So, roughly, the divisions broke along lines whether you were anti-noble, anti-clerical, generally egalitarian, and in favor of a republican form of government – or not. A real problem immediately becomes obvious: there are way more factions than there are sides of room. If only the French had established the assembly in an octagonal horse-barn or something that permitted a more nuanced political self-identification! (“I am an eleven-o’clockist!” Ranum declared proudly. “SCUM!” shouted the entire six o’clock bench in reply.) 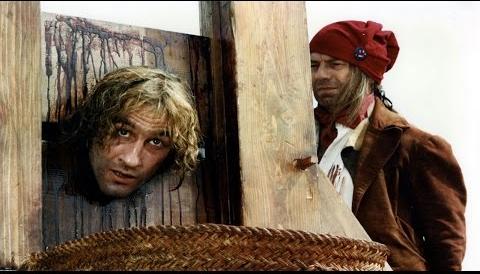 The critics actually gave “Danton” pretty good reviews. Not like this.

On the left you usually had the Jacobins – the famous Club Jacob [Not to be confused with a popular Irish biscuit] – the Jacobins were, at least at first, the “winners” in the revolution, but they broke quickly into a spectrum in terms of their preference around the degree to which the nobles were to be disempowered, or property redistributed, and what about the clergy, etc? The Terror, which most of us Americans know as the nobles being sent to the guillotine, was followed by mini terrors or internal purges, as various factions within the ‘Left’ (the “winners”) turned on eachother. That’s where you had events that have filtered down to us through popular media, like Marat’s assassination and Danton’s defeat by Robespierre, which resulted in Gerard Depardieu being guillotined in 1983. [If you like costume drama, it’s worth a watch: wikipedia] Robespierre later lost out, too, and wound up going the same route as Danton. Revolutions are problematic: there’s an inner dynamic that it’s easy to get everyone to agree that the establishment needs to be overthrown, but then the knives come out – literally – over what should go in its place.

At the back of the assembly hall was a tall bank of bench seats – what today we’d call “bleachers” where the Girondins – leftists that overlapped the Jacobins – sat: La Montagne (the mountain, because: tall) – most of the bloody purges in the French Revolution, after the low-hanging fruit of the nobility went to the guillotine, were between various Jacobins and Girondins. All “Leftists”!  The “Right” had already been decimated, and mostly consisted of pro-nobles and even proto-monarchists, who largely wanted their country back and variously conspired to invite back the king or establish a constitutional aristocracy. 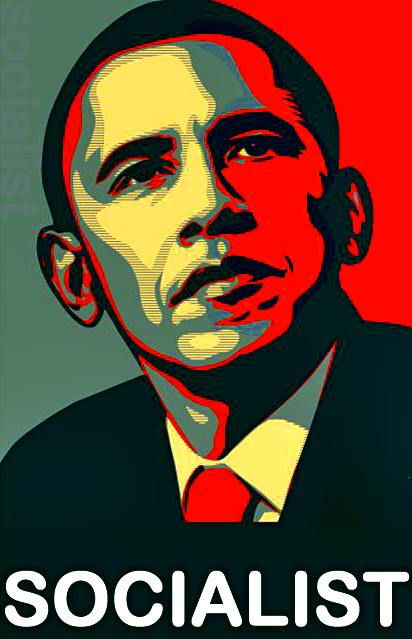 The point of all of this is that it doesn’t map particularly well to the Left/Right divide that politically naive ideologues talk about today. Today we’d probably characterize the Right as “reactionary”, “conservative”, “establishment” whereas in post-revolutionary France, everybody was “reactionary” and “anti-government” depending on which day of the week it was. Today we might characterize the Left as “egalitarian” (or “socialist” if you’re a politically naive American) and “anti rich” or even “anti government” – but in post-revolutionary France it was the Left that was chopping people’s heads off. Until the Left started chopping the less Left’s heads off, and then the nihilist proto-dictators led by Talleyrand and Bonaparte made the standard appeal of dictators: stability (at a price) and Make France Great Again (at a price) plus a whiff of grapeshot.

The Left/Right divide, as we see it today, is a product of propaganda and little else. People who use the terms are usually allowing their natural enemies to define their language, which is tantamount to allowing them to establish their thinking for them. Per Argument Clinic, Left/Right is labelling [stderr] and is a dishonest move that ought to be vigorously counter-attacked when you encounter it. If you want to tie your opponents’ brain into a knot, I suppose you could invest the effort to learn enough about pre- and post-revolutionary French politics, that when someone calls you a “Lefty” you could say “No! I am a Jacobin! Are you a Girondist Montagnard!? Or are you a monarchist?” The problem is that your interlocutor will almost certainly have no idea what you’re talking about, because they almost certainly have no idea what they’re talking about, either.

“… tantamount to allowing them to establish their thinking..” – I guess I side with Chomsky on the degree to which language forms our thoughts. For abstract thinking such as thinking about politics, it seems to me that your language frames your thinking which frames your language. So, if I can establish the frame in your mind that “Socialists are bad” and then “Leftists are sometimes Socialists” then I have moved you a few steps toward “Leftists are bad” without having to make an argument. If I then call Marcus a Leftist, I’ve made a connection, however tenuous, that Marcus is bad because [citation needed]. This is the essential “bait and switch” of propaganda and marketing and it appears to me to be an exploit in how we think and how we use language to think.

I was tempted to frame all of this in terms of the Left/Right divide historically wound up serving Bonaparte, the same way the Red/White divide in Russia wound up serving Stalin, but that’s unfairly simple. Some of the people who use these terms mean them – they’re just naive, and they’ve been propagandized into allowing themselves into being manipulated through labels.