There was some discussion on bread, recently, which got me to thinking about…. Popovers!

Popovers are legendarily difficult to make. It is a false legend, put out by people who want you to not have popovers. Once you know how to make them, you can have them any time and you can impress your friends and be the envy of your enemies. Or, if you don’t have any friends, you can get some, lured in with the smell of cooking popovers. 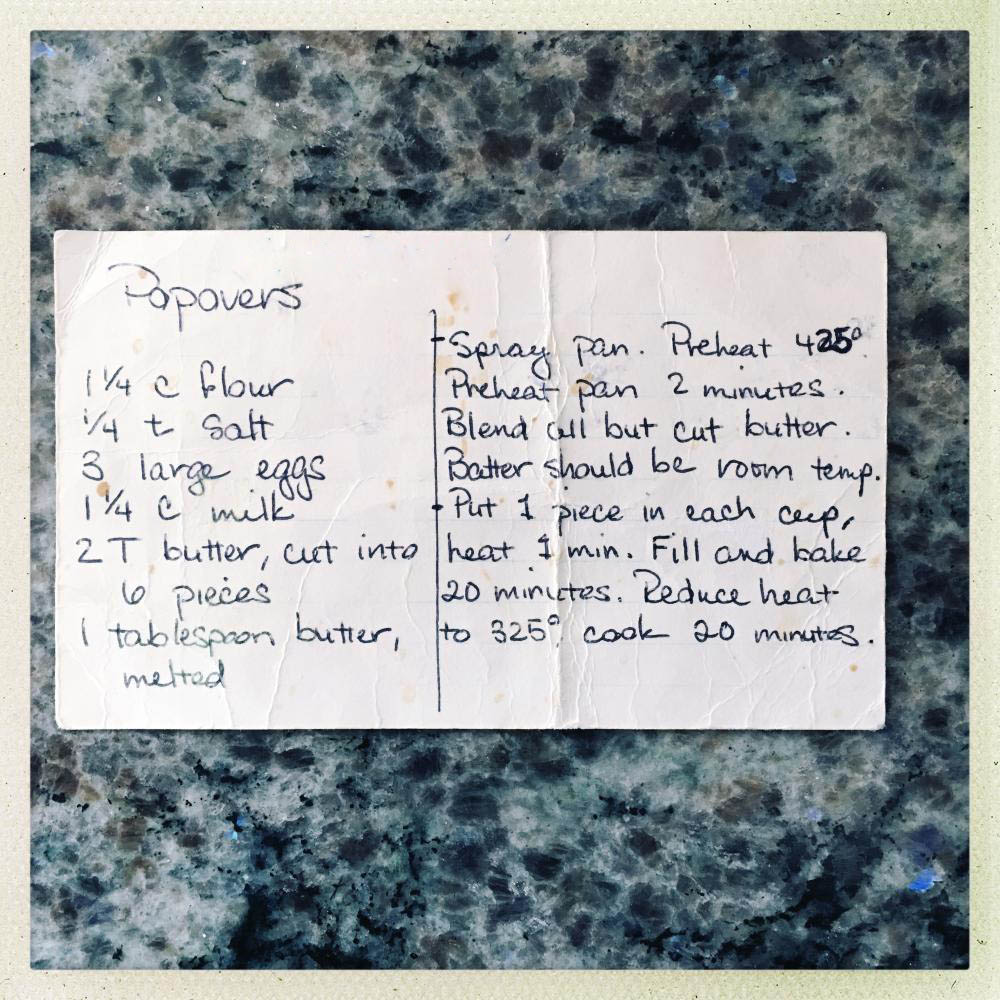 That is not my writing. It’s legible.

This recipe is a basic one, but I keep the card because I got it from a friend who, unfortunately, lost a battle to cancer. She was a wonderful person, and a bit of a control freak, and used popovers as a way of gaining control over anyone who was in her house on sunday mornings. You could not speak loudly because the popovers might fall. You could not operate power tools, because the popovers might fall. You could – in fact – not do anything that she didn’t like, because: popovers. I’m an experimentalist, so I began making variations in the process and discovered that there are really only two rules about popovers that matter: don’t get the batter too wet or too dry, and don’t open the oven to check on them. I will explain.

Some recipes will say the eggs must be room temperature or whatever. That’s all nonsense; I have confirmed through repeated experiment that none of that makes any difference at all. (You can also walk heavily and operate a power drill if you want)

The only special tool you will need is a ~$35 silicone popover pan.[amazon] I’ve used the metal ones and you can get OK results if you go crazy buttering every millimeter of them, but if you use the silicone ones you can just rock right ahead and not worry about the popovers failing to demold. Popovers that fail to demold are a big problem: blame the guy stomping around with the power drill. If you read the card above, there is stuff about putting butter in the cups: that only applies with metal cups, not the silicone ones. Follow my directions not what’s on the card.

A whisk really helps. I use the same whisk to mix soap, plaster of paris, and popovers. Everyone needs a whisk. You can do this with a fork if you are ultra hardcore but, seriously, don’t. When I was a kid I used to beat eggs with a fork, until my dad explained to me that nobody respects you for being stubborn about your tools, they just think you’re silly.

Start your oven heating to 425. This is a very fast build and you can make the batter before your oven is fully heated, so get it hot and take your time.

You want the deep popover pans, not a standard-size cupcake pan. Something like this, in the picture below: 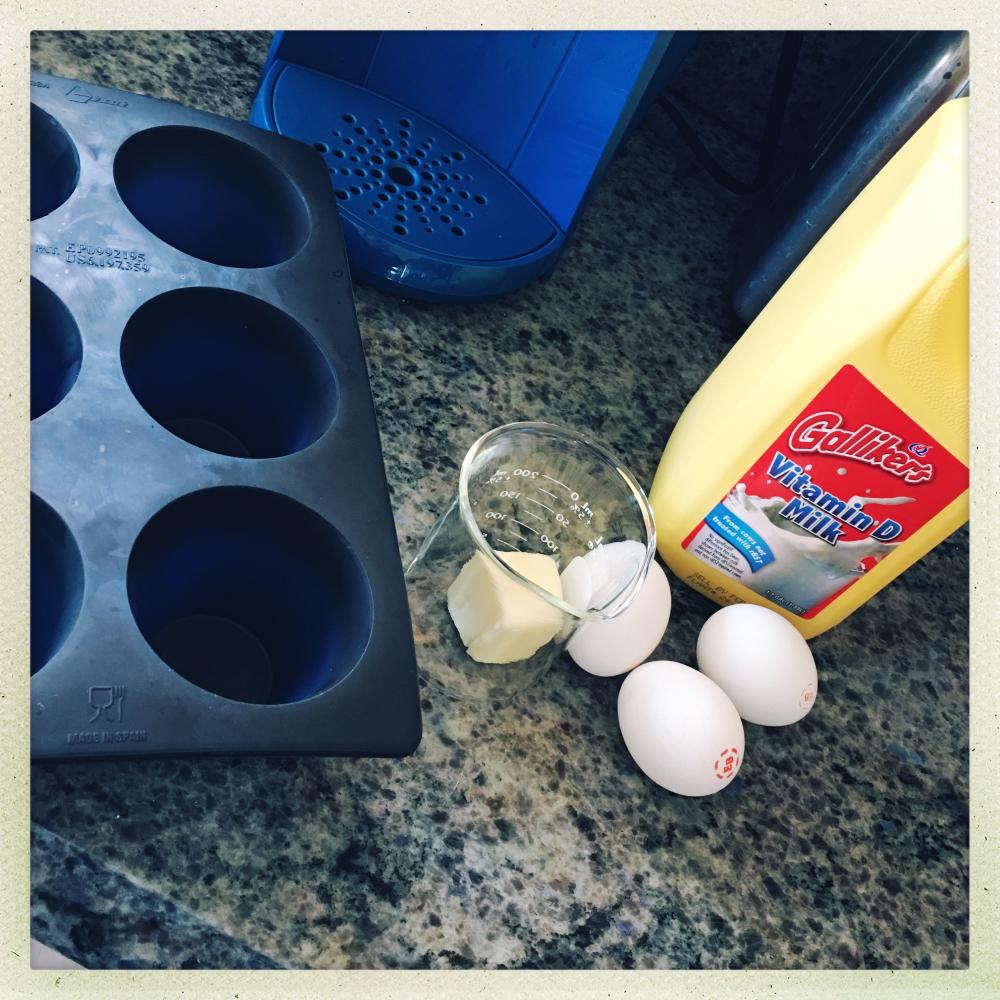 Break the eggs into a bowl, add the milk, microwave the butter in short bursts until it melts. 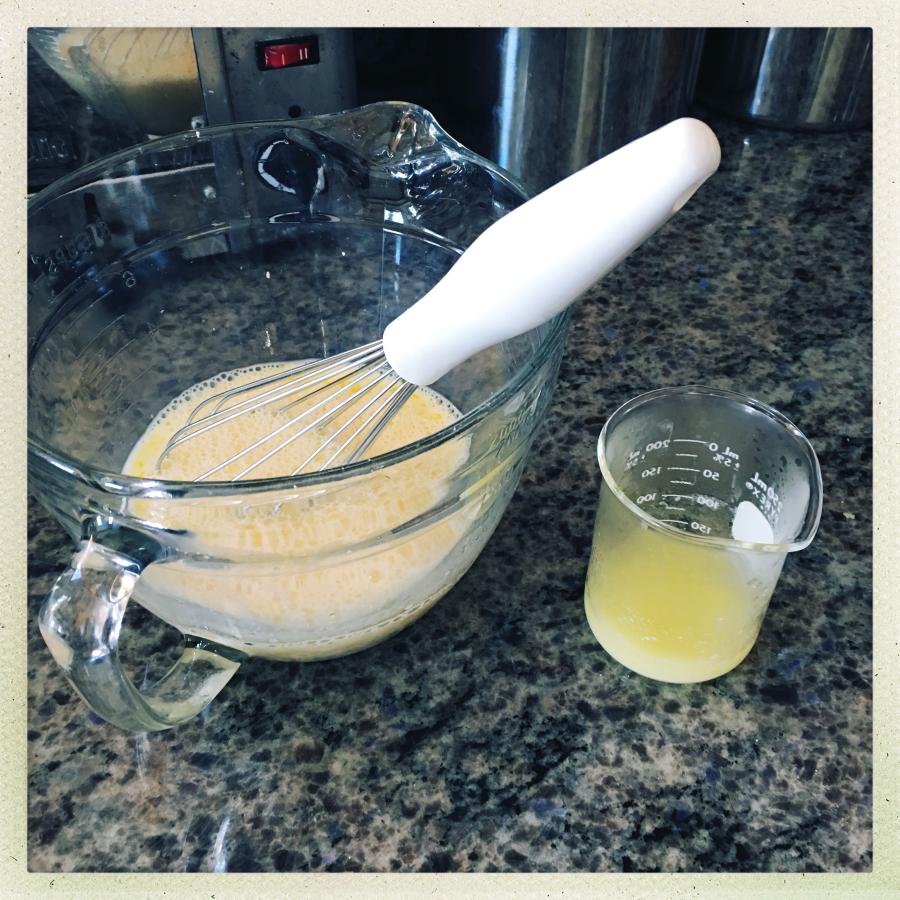 Some recipes say you have to sift the flour, or whatever. Nope. What I do is add the butter and whisk it in to the salted milk and eggs, then add a cup of flour. If it looks a bit too runny I add a couple tablespoons more.

Your batter must be the right consistency. It should look about like this:

The reasons the consistency is important are two:

If your popovers fail it’s almost always because your batter was too thick or too thin (or you kept opening the stove to look at them)  That’s why I took advantage of the cloud computing capabilities of youtube to present the little video clip above. Now the NSA knows I make popovers.

Give the batter a good beating. You don’t need to foam it like you would shaving cream, but you’re trying to loft a bunch of tiny bubbles into it that will make it rise when it hits the oven. That’s the reason for the whisk. When your oven is hot and your batter is beaten, pour it off into the tray. If you wind up having the batter sit for a while, beat more air into it before you pour it, then get it right into the oven. 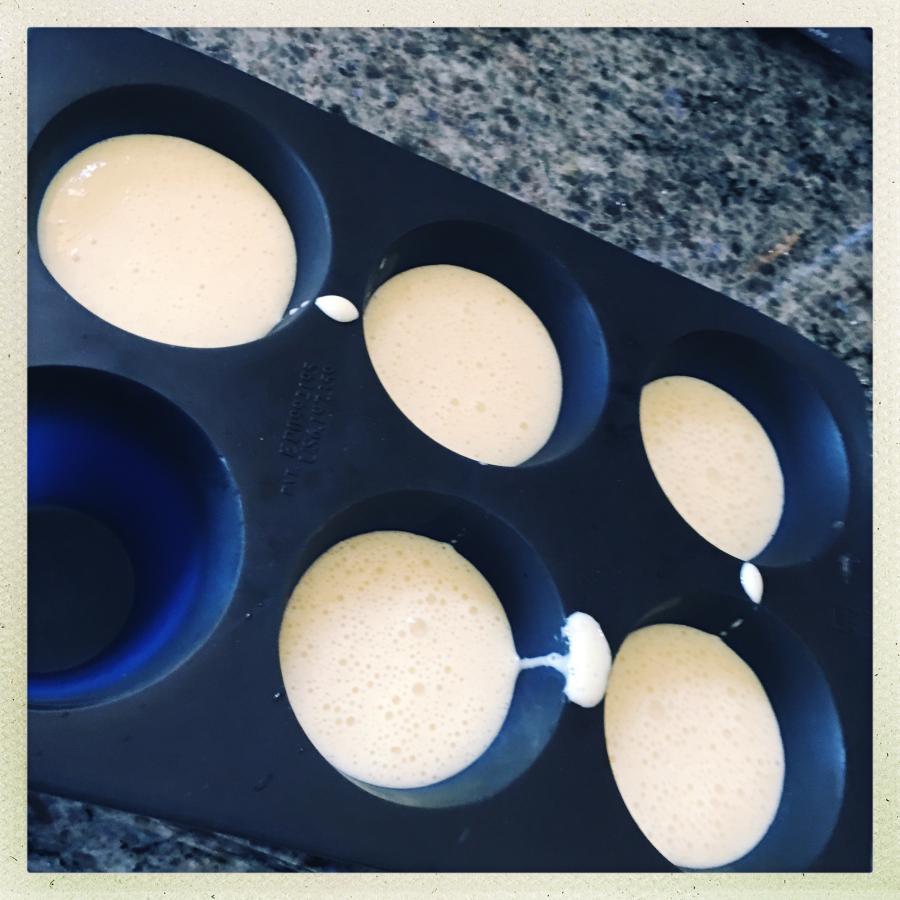 When you stop beating it, you should have bubbles (like that!) on top, which means you’ve gotten enough air into the batter. Then put it into the oven: 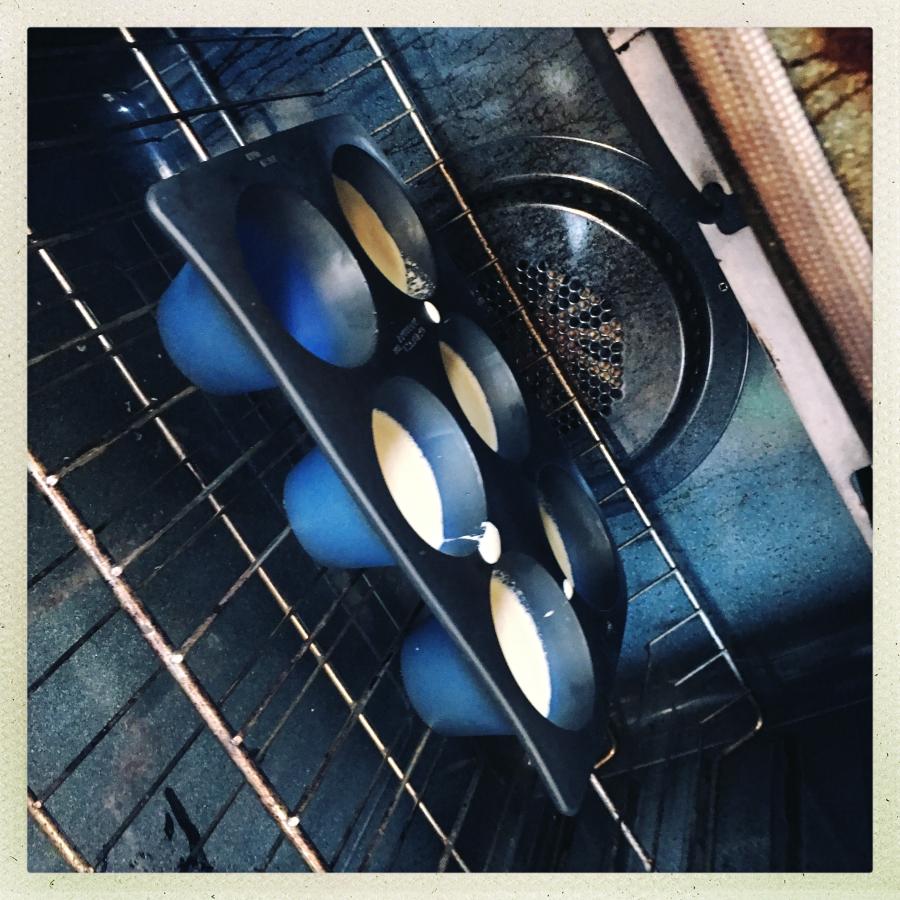 I have to confess something: I tilted my iPhone when I shot this, because tilty compositions are “edgy” and “artistic” – if you actually had your oven at a 45-degree angle, the batter would run out of the cups and your popovers would be ruined.

OK, now your popovers are in the oven at 425. What you want to do is wait about 20 minutes while the marching hand-drill band stomps around outside. After about 20 minutes you want to turn the heat down to 325 and cook them another 20 minutes. Or so. Here is the trick: you can crack your oven door a teeny bit so you can peer in, just don’t open it wide or keep it open a long time or the temperature will drop and the foam-bubbles that are expanding and holding your popovers up – those will collapse and you’ve got hockey-puck-overs. If that happens, invite your hockey fan friends, quick.

Before you do the turn-down you can sneak a quick peek – they should be starting to swell up in the cups. If they aren’t, something is wrong. if they are already getting big and puffy and brown then your oven’s thermostat is off (which is fine) and they are ready.  This is baking, not Large Hadron Collider – close enough is fine. When they are fluffy and golden-brown they are ready. Don’t keep opening the oven door! You will learn quickly to tell when they are ready just by the smell. 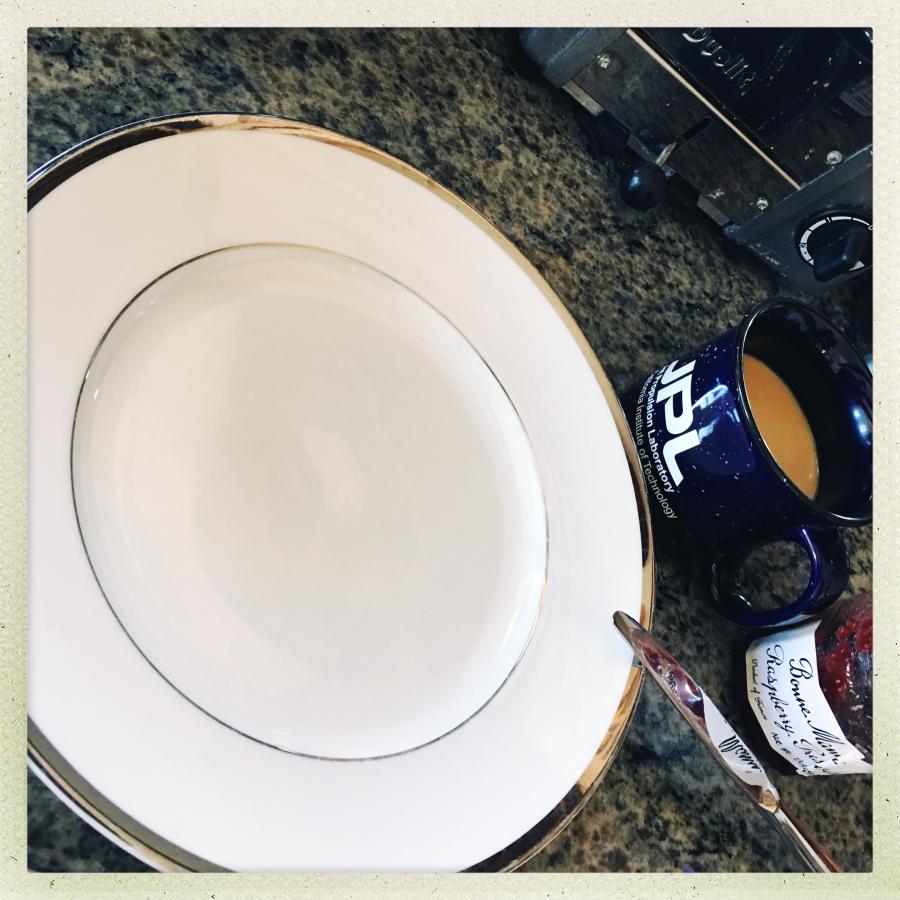 When the popovers come out of the oven they will deflate pretty quickly. So you want to have everyone ready to go. That is one place you do want to be a control freak when it’s popover time: they will not wait for your guests. Everyone should be seated at their place with a fresh cup of coffee. If you have butter (they are buttery already which means you should butter them more!) its best if the butter is soft; the popovers are soft too and you cannot spread cold butter on them. 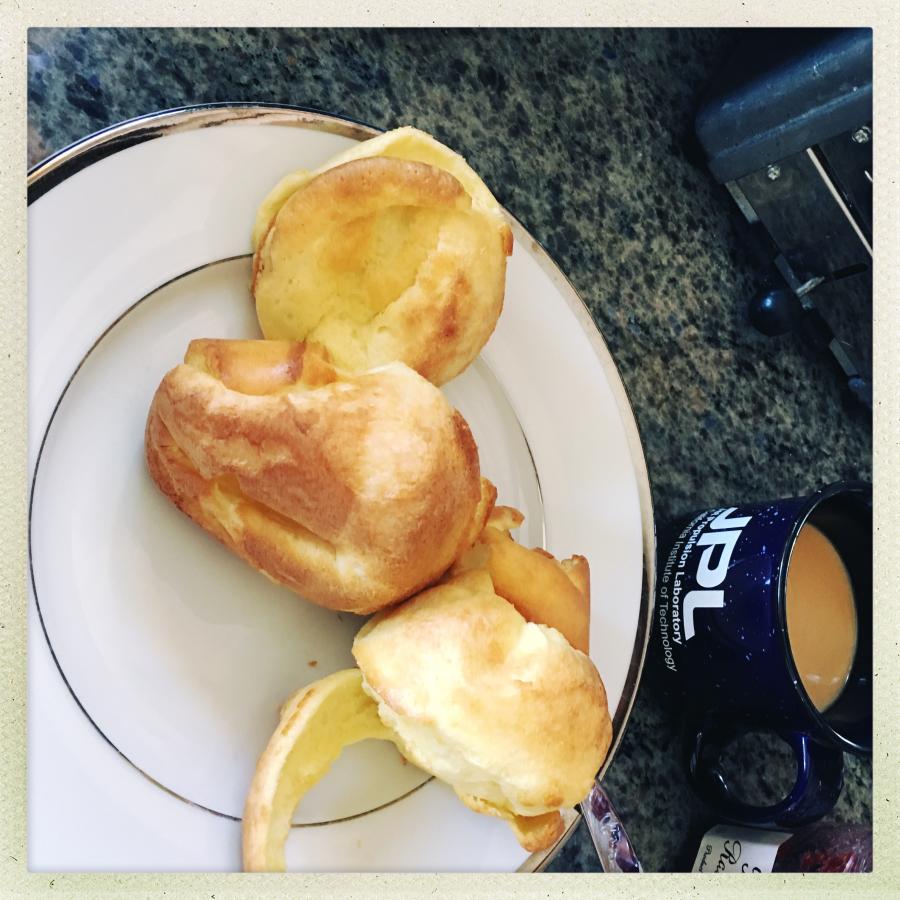 Mastering popovers is an essential life-skill. If you can do this recipe (and it’s super easy!) there are a whole bunch more things you can do with it. I’ll explain in another post, someday.

Melting butter in a microwave: short pulses. I do 20 sec, 10 sec, 10 sec and when I get into the 10 second part, I take the beaker out and give it a shake. If you get butter too hot in a microwave the water in it will pop and blast butter all over everything.

I always feel sad when I make popovers. I used to “recycle” spares by tossing them out the kitchen window for my dogs, who appeared to have a theory that sometimes the gods made popovers appear on sunday mornings. They were always suitably grateful. Now, whenever I have a spare popover, I can’t help but think of them, and I miss them so much. One thing you’ve got to say about dogs: they are always very appreciative of your cooking.