During the “Arab Spring” (what a loathsome, patronizing, attitude we express!) the US Government repeatedly socialized ideas about how Twitter, etc, were important to helping anti-government protests, i.e.:

The Obama administration, while insisting it is not meddling in Iran, yesterday confirmed it had asked Twitter to remain open to help anti-government protesters. [guardian]

Anyone with any political awareness ought to expect that, where action happens an equal and privileged hypocritical reaction also happens. It’s like some kind of horrible Newtonian law: if the US Government asks someone to do something for “good reasons” it’s probably doing the exact opposite, itself, for all the wrong reasons. I imagine it would be virtually impossible for a government that was facing civil unrest and protests to not see “hey, Twitter, stay on so that protesters can organize themselves!” as interfering in their politics. 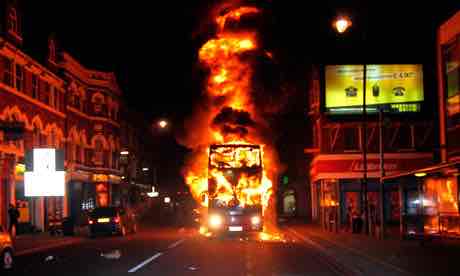 A Bus Burning in Tottenham, twitter via the [Guardian]

Fortunately, there were some sensible voices raised against the forces of reaction’s knee-jerk desire to shut Twitter down:

An in-depth analysis of a database of more than 2.6m riot-related tweets has revealed the ways in which the network was used during the disturbances. “Politicians and commentators were quick to claim that social media played an important role in inciting and organising riots, calling for sites such as Twitter to be closed should events of this nature happen again. But our study has found no evidence of significance in the available data that would justify such a course of action in respect to Twitter,” said Prof Rob Procter of the University of Manchester, who led a team of academics conducting the analysis. “In contrast, we do find strong evidence that Twitter was a valuable tool for mobilising support for the post-riot clean-up and for organising specific clean-up activities.” [Guardian]

In the US, in the name of the Constitution, agencies that are sworn to uphold and protect the Constitutional rights of assembly and free speech, the forces of reaction already have things sorted: 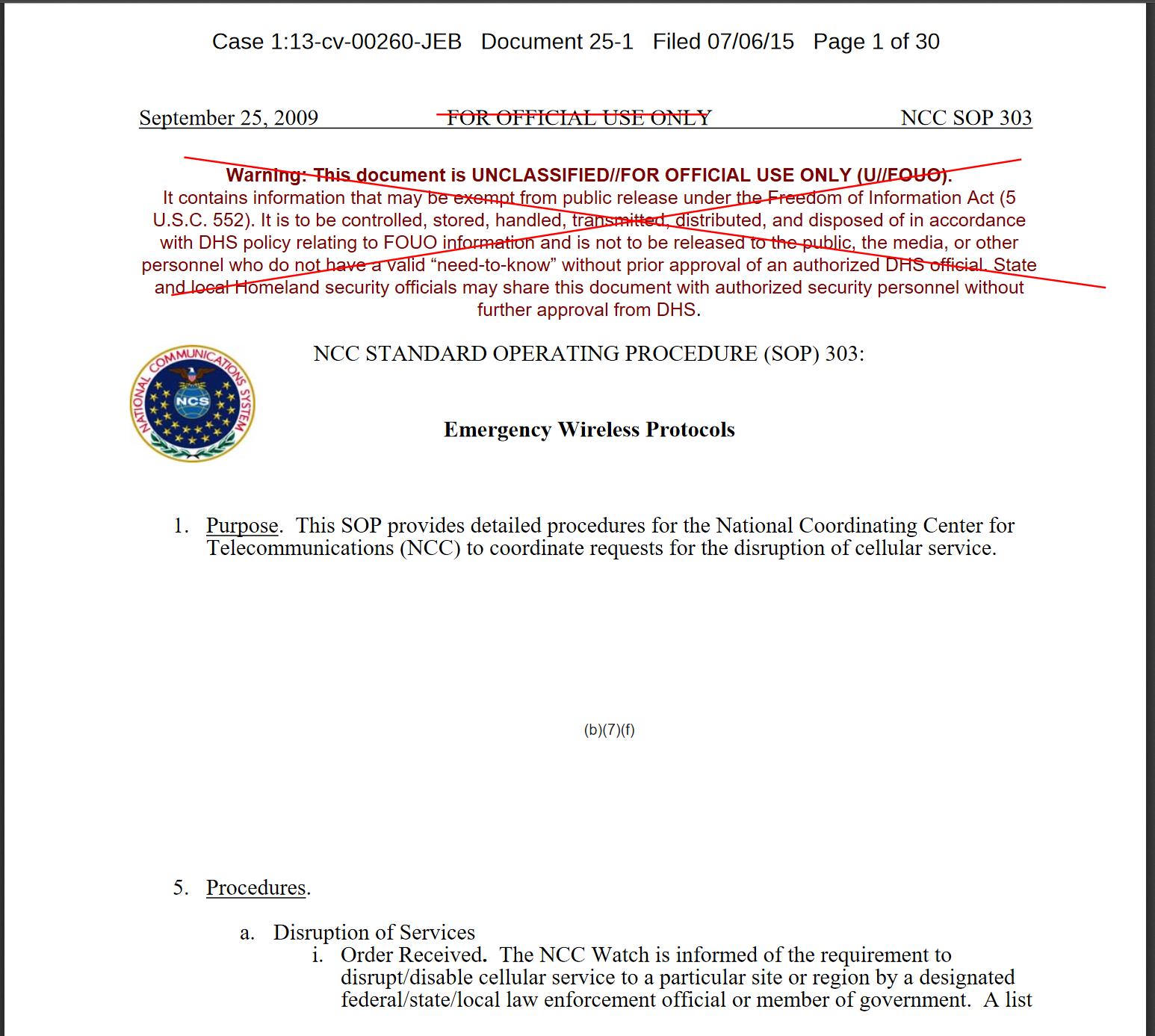 There is already some question as to whether this capability has been used to disrupt citizen communications (specifically: to keep the press from being able to, you know, tweet out pictures) at #NODAPL.

And, BART cut cell communications “for safety” during protests that turned violent:

Organizers planning to disrupt BART service on August 11, 2011 stated they would use mobile devices to coordinate their disruptive activities and communicate about the location and number of BART Police. A civil disturbance during commute times at busy downtown San Francisco stations could lead to platform overcrowding and unsafe conditions for BART customers, employees and demonstrators. BART temporarily interrupted service at select BART stations as one of many tactics to ensure the safety of everyone on the platform.[BART statement as reported in wp]

While the Bundybros were occupying Malheur Wildlife Refuge, the FBI also took down their communications, which may have made it easier for them to “divide and conquer” the protesters, resulting in one death.

As the occupation of the Malheur National Wildlife Refuge enters its 30th day, it appears the FBI may be locking down lines of communication.

So, it appears that the main difference between the US Government (other than the obvious fact that it is right) and the Iranian government (obviously wrong) is that the US Government has better tools. I bet the Brits are gearing up with stingrays and slushboxes all over the place, for their next riots – and, remember, the retro-scope will be engaged, so that network fusion tools can be applied to build communications webs out of the collected information. If you know someone who was at one of those riots or was re-tweeting those pictures, you may not want to try to get on an airplane for the next couple decades.

The NCC document Epic published, above, shows that the NCC’s internal communications infrastructure is unreliable crap – they use faxes, conference calls, and lines drawn on Google maps to identify areas for shutdowns. Some of the contact information for the various NCC participants are in the document (hopefully they have gotten new email addresses and phones) but I would not take a bet that a competent social engineering hacker couldn’t talk them into engineering a shutdown of someplace, just for fun. 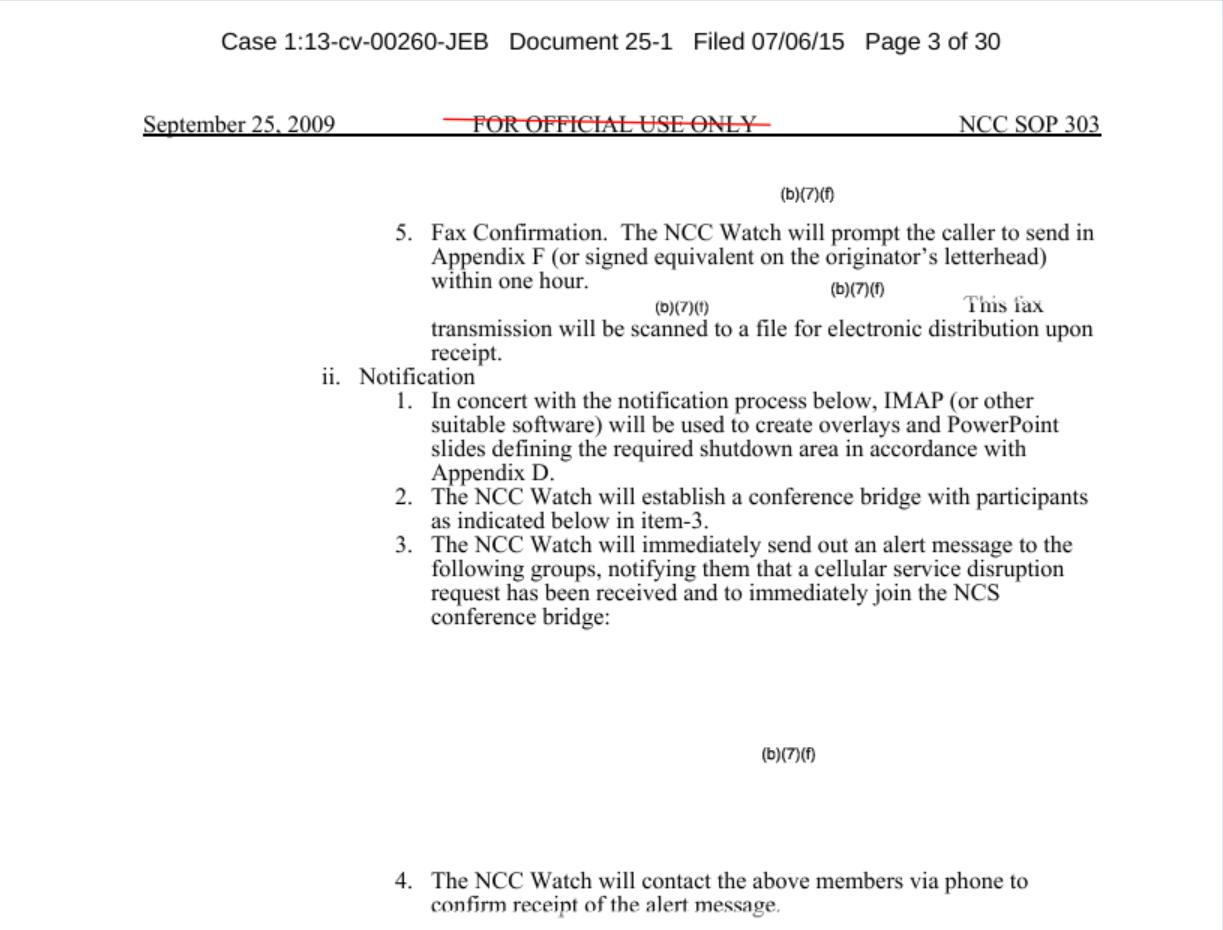 This is simultaneously sad, scary, and maddening in more or less equal measure.

“In an interconnected world, an attack on one nation’s networks can be an attack on all,” she said. “Countries or individuals that engage in cyber attacks should face consequences and international condemnation.

“Virtual walls are cropping up in place of visible walls,” Clinton said. “With the spread of these restrictive practices, a new information curtain is descending across much of the world.”

Clinton said the United States would push to preserve the ability of anyone to connect and freely transfer information over the Web. While short on details for how that goal would be achieved, her speech sends a signal that technology plays an important role in U.S. diplomacy.

– Hillary Clinton, when she was US Secretary of State [guard]