A couple of years ago, I read some reference to Klein bottles, which made me decide to see how well people have represented them on 2D surfaces. So I google image-searched them and hit the wrong option in my search bar, which took me to Ebay instead of Google.

Someone was selling Klein bottles on Ebay!  I got a lovely pair of little Klein Earrings for a friend, and this fine specimen for myself. I know a fellow, one D. Klein, so I got him one, too, and he now has a sort of personalized bottle. 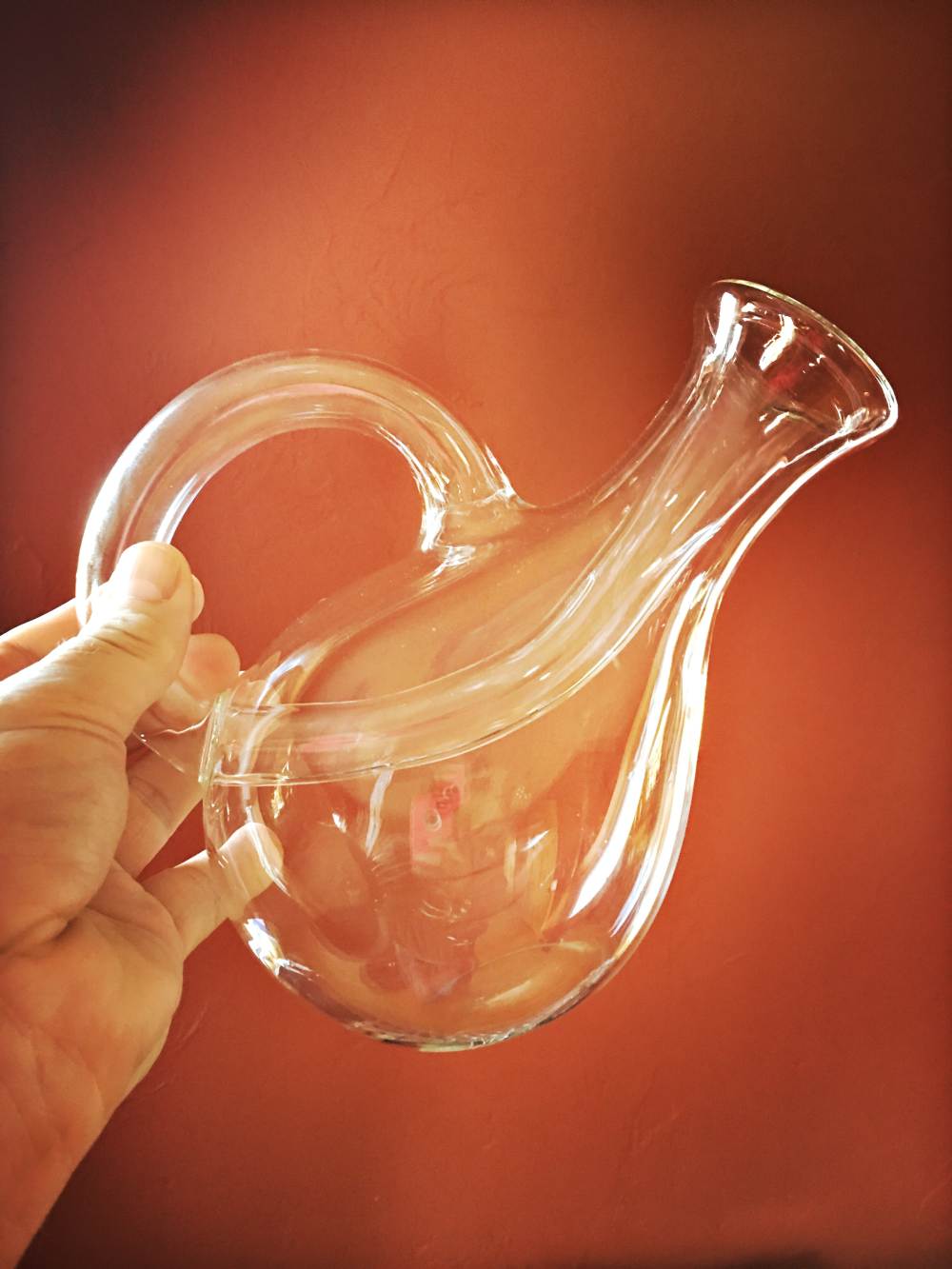 This is a Klein Bottle. There are many others like it but this one is mine.

The Klein bottles are interesting but not very useful; if you do get water into it, it’s very hard getting it out and getting the inside dry is a matter of waiting months for it to evaporate clean. Some topologist should invent a Klein Bottle-brush and sell it on amazon.com.

Recently, Mano Singham over at his blog, posted about tantalus cups (pythagoras cup) so I thought I’d see if there were good glass examples of those – I reasoned that the same folks who did the klein bottles might be making pythagoras cups. And lovely specimens they are, indeed! Because I am a greedy hoarder of objects, who convinces himself he’s supporting the arts, I got a few to give about as my official post-holiday random gift.

A Klein bottle is a 3d solid made of mobius strips

Then, things got fun!

When I placed my order, I got an email that it was going to ship, etc, and it was signed “Cliff Stoll.”  Now, anyone who’s touched computer security has probably heard of Cliff Stoll. Cliff is the author of “The Cuckoo’s Egg” – a vertigo-inducing bio/story about an astronomer who discovers a $0.25 discrepancy in a billing system for a timesharing computer, and backtracks it to discover an international hacking espionage team. Spoiler: Not Russians, North Koreans, or Chinese. I used to give out copies of the book to corporate executives who didn’t understand what computer security can be like. Cliff went on to write a book called “Silicon Snake Oil” in which he (rightly) observed that the internet was not all it was cracked up to be, assuming (wrongly) that it mattered. I had a rather surreal experience, once, sitting in a conference in Washington, next to sci-fi author Bruce Sterling while Stoll did a sort of “mad scientist” impression that was off-putting more than it was provocative; I think that performance was probably “Peak Cliff.” The Washington/intelligence community/law enforcement/DoD crowd take themselves a bit too seriously to countenance a performance like that.

So, I replied, “Is this the Cliff Stoll, or a Cliff Stoll” and sure enough, it’s one and the same. Considering that the internet is such a huge place, I theorize that there are people who are nodes of weirdness that hang out at the bottom of certain bell-curves away from the norm (and I am one of them)  we bump into eachother in strange places all the time. I’m used to it.

The packaging from the Acme Klein Bottle, authored by Cliff, is extremely puckish and quirky; worth the price of admission. For example:

Your Klein bottle can be filled with almost any fluid. In fact, we ship our Klein bottles filled with a carefully controlled mixture of 78% nitrogen and 21% oxygen, along with minor traces of argon, carbon dioxide, neon, and other useful compressible fluids. Weather permitting, we may add a small amount of water vapor, but never more than 3%.

Some Klein bottle owners are tempted to pour liquids such as water or alcoholic mixtures into their Klein bottle. As far as I know, this violates no physical, biological, or mathematical laws. However, your Klein bottle can be difficult to dry, because its “inside” can only be reached through a labyrinthine path. It’s hard to sneak a drying towel into a Klein bottle (although it can be argued that all towels are encompassed by a true Klein bottle).

Kleinbottle.com has lots of delightfully weird stuff for sale!

So It Begins » « The War on Authenticity: Some Progress in Authentic American Frontier Gibberish