Another protest took place, fortunately it ended peacefully. In fact, cops with riot gear didn’t even show up, in spite of some of the protestors being dressed in paramilitary gear associated with anti-government militia.

A Day in South Carolina 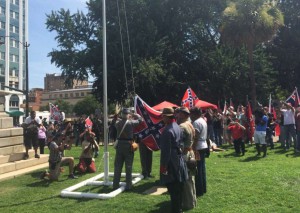 COLUMBIA, S.C. (AP) — The Confederate battle flag flew again outside the South Carolina Statehouse on Sunday — temporarily — during a rally that drew both supporters in Civil War garb and bullhorn-toting protesters.

Groups for and against the flag were kept separate by metal barriers on the front lawn, and police officers supported by helicopters circling overhead kept the peace as the flag flew again for several hours.

What’s missing: Cops in riot gear crashing down on those guys and dragging them, bleeding, across the concrete.

Why is it that some yelling matches are incipient riots that justify breaking out the battle gear and body armor, while others are peaceful demonstrations?  Well, in some riots, like the one at Mondawmin Mall in Baltimore, they shut bus service down around the protest so that nobody could leave and, yeah, people didn’t disperse because they couldn’t.

At least none of the confederate Walter Mittys was carrying anything that looked like a weapon or it’d have been “suicide by cop” right?

Monday Meslier: 63 – All Religion Inspires But A Cowardly And Inordinate Fear Of The Divinity » « Cops Murder Another Civilian on Video