Armed African-American man fatally shot by Houston police. Police say he was threatening. Video shows he was not.

An armed black man was reportedly shot and killed by police in Houston early Saturday morning.

According to the Houston NBC affiliate KPRC, Alva Braziel was standing in the middle of a southeast Houston street with a revolver pointed in the air around 2 a.m. Saturday. Two police officers were driving down the street and ordered him to drop the weapon and show his hands, and a witness also told him to put the gun down, KPRC reports.

But then the story changes.

Police said they shot a man who was armed, but then video shows up. The video shows that the police were apparently lying and that they fired 10 bullets into a guy who had his hands up.

The new story is: Cops murder a man with his hands up, attempt to lie about it.

The police had body cams on them but the video has not been released. I wonder if they had technical problems with the cams. 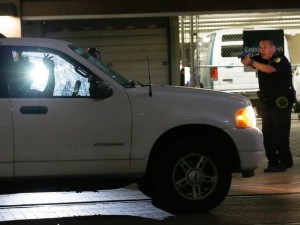 Cop “investigating” an innocent motorist after the Dallas shootings

The police must be buying their whitewash in industrial quantities.

I No Longer Support Cop Cams

Back in the day I was quite the fan of cop cams. Perhaps it’s because I did some work in July 2009 as a consultant to Taser, and spent a lot of time thinking about the security questions surrounding storing such video: how to keep it from leaking out and how to keep it from Rose Mary Woods leaning on the “delete” button. These are interesting technical problems. I designed a clever way of encrypting communications between base stations and portable devices, that doesn’t eat up the device’s battery with CPU cycles.* That was an interesting technical problem, too. This problem is not technical.

Cops cams aren’t going to work, folks. They presuppose that the cops aren’t a bunch of criminals and I think we need to move past that naive assumption.

We need a new version of the Black Panthers cop-watch patrols: crowdsourced citizen cameras that are surreptitiously recording every moment that a cop is outside of their car.

The picture I embedded above, of a cop pointing a loaded weapon at a citizen who apparently was suspected of being in a car in Dallas on the night that some cops were shot – that is evidence of a crime of assault with a deadly weapon being committed.  That is another thing we collectively need to do: chip away at the indemnity protections that encourage cops to be abusive, threatening, and violent. That cop above, pointing a gun in the face of an unarmed, unthreatening citizen? What is he learning when he gets away with it? He is learning to think he is above the law.

It looks like the video is getting put up and taken down, so I’ve hosted a copy on my site. I don’t suggest you watch it. Summary: it shows police shooting a man from about 25 yards away. He never charges them or anything like that, he simply folds up as the bullets hit him.

(* When the devices are not in use, they recharge their batteries and sychronize with the base station. What you do is have the device generate a random session key, then give it to the base unit to keep. Then it can use the session key to fill its local storage with zeroes encrypted under the session key. When it stores captured data it doesn’t need to encrypt it, it just XORs it with the encrypted zero-fill, which is not a very CPU intensive process. While the devices are recharging, there is ample current to do the encryption and the CPU is not needed for anything else.)

Meanwhile, At The Protest » « Sunday Sermon