We’ve got Meslier on Monday and Voltaire on Friday. Our cups runneth over! Faire rire et danser!

I’m not going to post a Meslier every monday or a Voltaire every Friday. I’m just going to do that if I feel like it. But it’s nice to know that I can blog for 100 years here without my well running dry, if I am afraid of that happening. That doesn’t strike me as a likely outcome but having lifelines like these is particularly good.

Nobody should accept mediocrities-by-committee like Milo Yiannopolous in a world that once held Voltaire.

It’s embarrassing to think that the “new media” hawked like a cat spitting out a hairball and came out with … that, when some of us have had the pleasure of reading Voltaire. By the way, if I had magic wishes, one would be to read Voltaire’s blog (because he certainly would rule the NYT op-ed pages instead of credentialled ideologues like Paul Krugman) the other magic wish would be that Mark Twain would be blogging today, too. The fireworks would be fantastic.

Yiannopolous has a “writer room” of unpaid nonentities working for him. Voltaire had just himself, his dancing pen, and his smirking wit. To say that Yiannopolous is outgunned and outnumbered is putting it mildly.

After my post about things about Voltaire, I went to my book case to shoot an illustrative picture. Then I was captivated, as always happens when I handle a book. Let me show you what I’m talking about, and over time I will infect you, also, with love for this remarkable character. 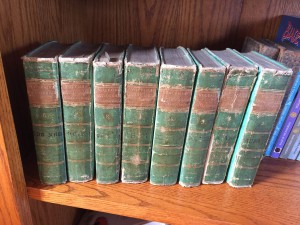 Remember: that was all written by one guy who just bashed it out. I can picture him, wrapped in his shawl from Catherine The Great, a big pitcher of lemonade on a table near him, and perhaps some hard-boiled eggs – favorite fuels for the genius – and a vast heap of paper. I had the chance, when I was a kid, to handle a copy of Diderot’s Encyclopedia with margin-notes by Voltaire; he did not appear to scratch out or correct much – genius is lazy enough to get it right the first time – so my mental image of him is not surrounded by frustrated wadded-up balls of paper containing mistakes. As he works he is neat, focused, and deadly and probably has the sniffles. Occasionally he chuckles a bit at something, frowns, then keeps writing. Expressions flicker across his features like candle-light and sometimes he mutters, “Diable!” 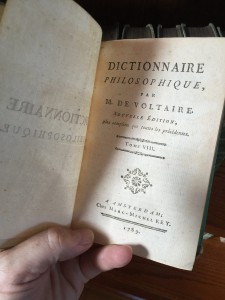 This was not printed in a large easy-to-read type. The French is exquisite, clever, quirky, and poetic – not precious, but close to that edge. When I was in high school my dad and I refurbished an old tin-type letter press and I typeset a few invitations for some campus events. It was a crazy laborious process and I was the only one of our little printing collective that ever did a full page of anything.

When I see a letter-press printed book like this, I want to weep with joy: 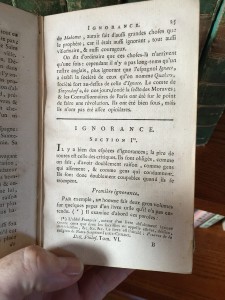 My edition is 8 volumes totalling 3,874 pages. You can get Peter Gay’s translation on amazon for $24.* Or it’s online here.

To really appreciate it, you have to go beyond the tactile and visible and see the ideas and wit behind it. I swear that I just opened it to a random page and it came up “Ignorance”  The entry begins:

There are many sorts of ignorances; the worst of all is that of critics.

They are obliged, in their situation, to have dual roles as people who praise and people who condemn, they are therefore doubly at fault when they are wrong.

Here’s how we’re going to play our friday Voltaire sessions! Feel free on any of the Vendredi Voltaire postings to suggest dictionary entries I should do a post on. And, if I choose yours, I’ll translate a few bon mots from it.

If nobody suggests any entries to look up, I’ll just open pages at random. Trust me, we can’t lose.

* Gay was one of my dad’s colleagues, and was an occasional dinner guest in our home when I was a kid. I didn’t understand what an opportunity for questions I was ignoring :(

Lyrics to Die To » « The Dining Philosophers, rebooted