The Brookings Papers on Economic Activity published a report about its findings on so-called “deaths of despair”–overdose, suicide, and other sort of high-risk activities taken up by those with an inclination to self harm due to severe depression. This report divided the subjects by their racial demographics and found that it was the “white working class” who was actually dying the most, proportionately, from these deaths of despair. The news followed suit. But I had spotted a sleight of hand shortly after opening the report that made me suspicious of the methodology: White people were divided by whether or not they had attained a high school diploma, yet all other racial demographics were generalized into a single measurement. 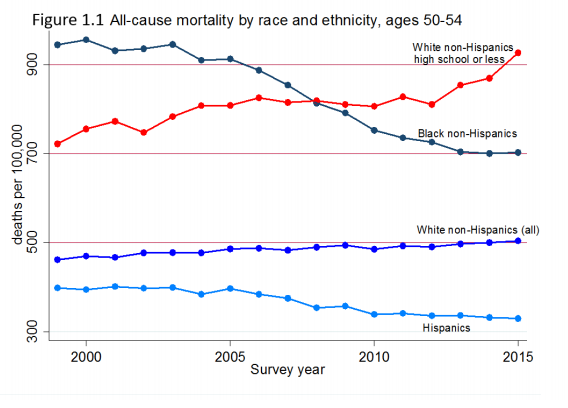 After a bit of digging I estimated that the rest of the paper was analyzing topics I haven’t studied academically, so I  shrugged it off as out of my league. Thankfully Malcolm Harris picked up where I left off.

Much of the media has been reporting that these findings apply to the “white working class,” but that’s not quite right. Although higher education is associated with class, Case and Deaton chose to use educational attainment instead of income or homeownership, and no one really thinks you cease being a worker when you step on a college campus — that would make most Americans members of the capitalist class, which we are not. To call their subject the “working class” is sloppy labeling, but there is a much bigger problem with the Case and Deaton methodology.

That problem is called “lagged selection bias,” and this is how it works: If you’re measuring long-term phenomena, there’s a risk that the pool of people you’re looking at will change while you’re looking at them, owing to a separate trend. For example, if you were looking at the relation between 12th-grade cigarette smoking and income 10 years later, I’m sure that you’d find a serious drop during the past decade. But that wouldn’t necessarily mean the salaries of former teenage smokers are actually going down. Rather, smoking in the 12th grade has become a much rarer phenomenon — falling from 25 percent in 1997 down to 6 percent today — and it’s negatively associated with socioeconomic status. The 19 percent of high school seniors who would have smoked in the 1990s but wouldn’t think of it in 2017 throws off your analysis. What you’d actually end up detecting is not so much the relationship between teen smoking and future income, but changes in youth smoking behavior over time. The (ex-)smokers’ salaries could be increasing normally and you’d never know it by that method.

Read the rest of Harris’ analysis on this widely-reported paper here.

Silver-lining-in-genocide Senator: “binders of letters” » « Guatemala, what are you doing