I want to begin by expressly stating that I do not think we should hang Graham Linehan, as that would be both illegal and immoral. What I do want to defend, instead, is the act of asking whether the penalties of hanging Graham Linehan outweigh the merits. I expect Graham Linehan will even support this enterprise, as he has publicly taken the stance that objecting to a question asked is an inherent act of moral wrong, and conversely that a question posed is an inherent act of moral good! And so, Linehan being a man of his word, I pursue an answer in good faith in a gesture he would doubtlessly support: Should we hang Graham Linehan?

But what about the merits? Well, not a day goes by where Graham Linehan, a cisgender, heterosexual man, tweets from his throne, weighing in on matters such as who gets to call themselves a lesbian or abusing the term “safeguarding” to cloak inciting libel in respectable vocabulary. Certainly as a queer person actually acquainted with the theory on which he pontificates, his falsely proclaimed expertise and the undue attention it earns him is deeply vexing. As a rule, I do not want cishet men advocating their own opinions on the topic while defaming the actual scholars as “groomers.” That would strike me as an injury of epistemic injustice, one which would certainly cease to occur again should he be hanged–though I certainly wouldn’t wish that to happen.

“Now now now,” Graham Linehan might be saying. “By questioning whether we ought to hang Graham Linehan, aren’t you implying it could be a possible outcome that some people will finish the conversation convinced they should hang him, and thereby your question constitutes an implicit threat?” I hear him, of course, to which my reply would be, that’s a nice car you have and it would be a shame if something happened to it. I stand by that statement fully. Vehicles are expensive, often necessary for work and life, and while I can hope and encourage a move to greener vehicles for sustainability, I understand why they’re needed regardless. I truly believe it would be a shame if something happened to it. Isn’t that… good enough, Graham Linehan? It seems to be good enough for you, after all. We’re just asking questions.

Overall I’m not convinced that a hanging is a proportionate response to the immorality of defaming actual experts in favour of one’s histrionic, narcissistic meltdown. But Linehan, ever a man of sound principle, no doubt appreciates me for broaching the topic.

What about you, dear readers? Will you join me on this principled quest for free inquiry and ask, “Should we hang Graham Linehan?” Please remember to keep the conversation civilized, readers.

It’s become something of a running joke in the tran hivemind:

Barry: Great to be here.

Kent Host: So, Miranda, why don’t you start by outlining your concerns?

Miranda: Well, Kent, I just think that all these things are moving too fast. When I was a child, I loved reading about George in the Famous Five. But did you know that if George existed today, she would be forcibly bundled off to a Gender Reassignment Camp, force-fed hormones, sterilised, have a beard superglued to her face, and then indoctrinated into the patriarchy?

Barry: Well, as an astrophysicist, this isn’t really a subject I’m qualified to comment on. But if I were to wildly speculate, I would assume that this is the end of civilisation as we know it, and a probable contributor to the heat death of the universe.

Kent Host: So if I understand you correctly, the existence of trans people could be the end of life on Earth?

Barry: That is a very strong possibility.

END_OF_DOCUMENT_TOKEN_TO_BE_REPLACED

It is my very serious duty to announce a very important holiday that we should all be celebrating:

Today, on one of the last days of Pride Month, the eye-scratchingly awful hashtag #HeterosexualPrideDay has been trending top worldwide.

“Eye-scratchingly”? I’ll have you know this is a serious endeavour! Last year, I even mapped out the progress for worldwide heterosexual equality. This time I’d like to celebrate by making that progress explicit, comparing the two years side by side.

So, without further ado:

END_OF_DOCUMENT_TOKEN_TO_BE_REPLACED

On June 28th, 2016, Trav Mamone, a colleague of mine on FreeThoughtBlogs rather humbly suggested to thehumanist.com that the solution to all the trans bathroom brouhaha was to ban the actual offenders of public violence–cis men–from public accommodations. We just couldn’t take the risk, they argued, since the vast majority of sexual violence is carried about by cis men. I thought at the time that it was a capital idea, but I see now that it is an unfair and incomplete solution, and so I am compelled to voice my disagreement with them.

Us women are so busy being protected by men, see, that we seldom have time to really think about our circumstances. In the name of “saving us,” these conservative men have previously stripped us of our healthcare, blamed us for crimes committed against us, imprisoned us for having miscarriages, and supplied us with poisoned drinking water. Clearly, they have a track record we can trust, right? We can’t ban them from public spaces!

“But Siobhan,” my intrepid readers ask, “surely you are writing this because you have discovered something to the contrary?”

Quite so. I was thinking that there surely must exist some form of circumstance where all freedom-loving Americans can publicly and loudly void their bowels without being subject to invasions of privacy from the opposite sex. I mean, we already have solid stalls between ourselves and another stranger, but do those stalls do anything to stop those insidious infiltrators of the opposite sex, from hearing, and later remembering in nightmarish fever dreams, the grunts and tribulations of our digestive system? Why it would be positively indecent for men to learn that women poop, sometimes vigorously so!

END_OF_DOCUMENT_TOKEN_TO_BE_REPLACED 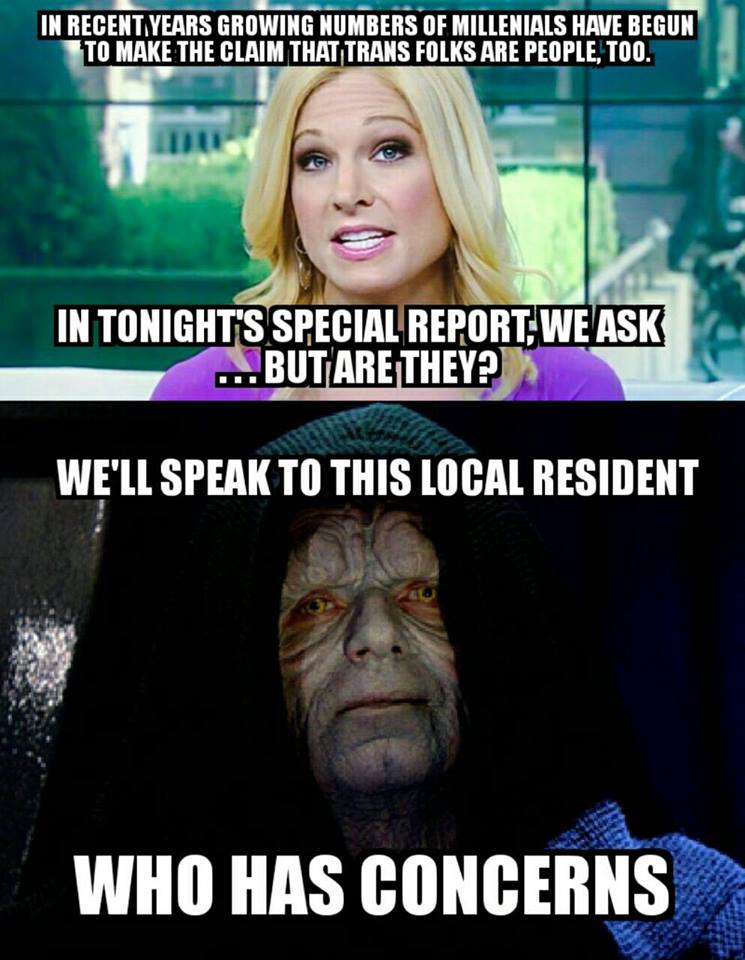 Guys, the Pope has helped me come to an important conclusion.

See now, the problem with the trans rights movement is that we just don’t have snappy enough phrases. We’re trying to bring academic terms into common parlance, and that’s a tough battle when the general public views pesky things like evidence with suspicion. The Pope has it all figured out though. Gender transition is such a boring clinical term. Why not use something more memorable, more colourful? Something that speaks to the masses? Something with that certain je nais se quoi that captures the imagination of the ignorant, inspires the illiterate, and emboldens the craven?

Why not, “the annihilation of man“?

“We are living a moment of annihilation of man as image of God.”

Thanks Pope. That is much catchier than “gender transition.”

Literally everything awful in the world is claimed by ISIS, even when intelligence groups release reports stating that no communications occurred between the perpetrator(s) and the so-called Islamic State. ISIS has claimed responsibility for a few attacks where the connections were ideological at best, and people have started to notice. Compounded by the ridiculousness of ISIS claiming responsibility for the Eiffel Tower fire–which was caused by malfunctioning fireworks–the French started #DaeshRevendique, or #IsisClaims.

“ISIS claims our defeat in the Euro”

Jason “I don’t get caught up in the details” Kenney receives another endorsement from a conservative pundit, Sheila Gunn Reid. But this endorsement is a bit… erm, shall we say roundabout?

If you don’t support Jason Kenney’s bid to lead Alberta’s Progressive Conservatives, some of Kenney’s allies might launch gender-based attacks on you.

Shortly after, fellow Rebel personality Sheila Gunn Reid took to her YouTube soapbox to tar-and-feather Quest, denouncing him as a Liberal and even taunting the former MLA for losing to a “gender-queer Colombian immigrant” during the last election.

Basically, David Quest criticized Kenney’s bid for the “Progressive” Conservative leadership, citing Kenney’s history of being the political equivalent of cucumbers pickled in gasoline. So one of Kenney’s biggest fans, suspected garbage fire Sheila Gunn Reid, decided the best way to discredit Quest was by pointing out he lost his election to a, quote, “genderqueer Colombian immigrant.”