Listen, certain political pundits who shall not be named figured out United Conservative Party leadership candidate Jason Kenney’s number a while ago. He’s not exactly subtle. If the news wants to hire a pundit that’s actually correct about things, they can pay me their mediocre white dude’s salary:

The latter remark is a bit of a stretch given that millennials have been straining under the pressure of boomer greed our entire lives, but okay Jean.

“You see, they’re sick and tired of politicians lying about each other.

I don’t really care about what they do to each other, actually. I’m sick of them lying to me.

When asked after the debate about Jean’s remarks, Kenney said he had no idea what his opponent was talking about.

Jean confirmed after the debate he was referring to Kenney’s campaign. He said someone on Kenney’s team has also falsely alleged he is against gun owners.

“I don’t think anybody else has rifles here except for me,” Jean said. “I’ve had them most of my life.”

Only in a Conservative leadership race could “look at all my guns” be a relevant talking point.

“If he has a particular complaint about something, he should say what it is, but we’ve been running a positive campaign. I’m proud of that,” Kenney said.

FACT CHECK: No he fucking hasn’t.

Jean has said he is a “church-going, God-fearing Baptist” who attended a Christian high school prior to university.

There is no part of that sentence that doesn’t make me gag. Didn’t Jean get the memo the millennials are the gayest godless generation yet?

The winner will be announced Oct. 28.

Theocrat or kleptocrat. Such inspiring politics.

A survey of 4,000 people aged 18-30 shows that 51% of young women and 45% of young men regularly use credit to stretch their finances until payday. The report also found that a quarter of young people in the UK are constantly in debt.

When asked how young people made their cash last to the end of the month, one in five said they used their overdraft and a similar number borrowed from family. The next most popular form of borrowing by people in the age group was using a credit card.

One in 10 said they had used a payday loan company, although for parents aged under 30, this number increased to one in four.

The Young Women’s Trust, which commissioned the representative sample of young people, said many of those questioned in the survey also worked extra hours or skipped meals to make their cash stretch to the end of the month.

And guess who is to blame?

“Young women are more likely to be stuck on low pay and on zero-hours contracts, which mean they don’t know how many hours they will work each month and whether they will earn enough to pay their bills.

“We regret to announce that all 50 states are now reporting several cases of DKD” said CDC epidemiologist Mark Webber. “DKD is characterized as expressing or believing that one has vast and expert knowledge in a subject which they actually do not. It most often presents in the fields of medicine and science.”

There is currently no known cure for DKD, but scientists are hopeful with more education and isolation, it can be contained.

“We haven’t seen this level of DKD since Jenny McCarthy started spreading her vaccine causes autism bullshit” said Webber. “I fear the DKD level will continue to rise as more and more people with DKD have access to the internet, as well as there being several celebrities with the disease.”

Some say the worst part of DKD is that the carriers have no idea they are infected, nor how easily they can spread it to others.

Efforts by the CDC to combat this problem to follow. There are also early signs of it spreading up here in Canuckistan, though Health Canada has so far contained it to the Toronto area.

Everybody knows Republicans have the True Issues of America at heart, and nowhere is this more apparent than their dedication in the War on Christmas! Well, at long last, the fruits of their efforts have been reaped:

“We’ve been trying to bring this guy to justice for years,” Newman said Monday. “There’s no telling how many Christian soldiers have been brutally subjected to Atkins’ seemingly endless diatribes about separation of church and state and why Christmas should not be a national holiday. Survivors say the torture sessions would go on for hours and hours.”

The charge of genocide against Atkins stems from allegations he tried to systematically wipe out the entire known population of elves, an ethnic group best known for baking cookies in trees and making Christmas toys in Santa Claus’ workshop at the North Pole.

“When’s the last time you saw a real-life, bona fide elf?” Newman asked. “Not a midget dressed like one with fake pointy ears, either. The fact that they aren’t around supports claims that Atkins exterminated them.”

[Please note: This is satire.]

In a BREAKING exclusive from The Beaverton, we have received completely totally accurate data on Canadians’ plans for election day!

OTTAWA – A recent survey has revealed that 9 out of every 10 Canadians will spend the entirety of November 8 experiencing a moderate to severe panic attack, manifesting itself in curling into a ball and mumbling ‘this isn’t happening’ over and over again.

“In 2012 I got together with some friends and we had a lot of fun live tweeting Obama’s re-election,” said Shanique Balewa of Winnipeg. “But this year I think I’m just going to sit in a dark room with trembling hands as I constantly refresh CNN on my phone.”

“That or just take a bunch of ambien and hope my nightmares are not as bad as the real world nightmare we may be about to experience,” she added.

From coast to coast, millions of Canadians advised of similar “rocking/moaning” plans. There were variations – some planned to constantly call friends and repeatedly ask, “Trump can’t possibly win right?”, while others intended to never say the name, relying on the Macbeth/Voldemort principal. Still the central activity of holding yourself close to prevent thinking about the horrible, shockingly likely, possibility remained a constant.

The nation’s therapists have reported efforts to calm Canadian’s election anxiety, though many note that upon discussing the source of patients’ fears, the mental health professionals joined the 90% and commenced panicking.

Reached for comment, Prime Minister Trudeau admitted to Canadians that, like most of them, he also plans to spend November 8th “freaking the eff out”. Sources in the PMO say this stems not only from fears of actually having to work with a the former reality TV host, but frustration over how a Trump Presidency would derail the PM’s plans to break the internet again by posting a “#feminist selfie” with Hillary.

The survey also revealed that the remaining 10% of Canadians were offering to e-mail in some YouTube videos that showed Hillary was just as bad.

Thanks for this BREAKING NEWS, Beaverton.

[I laughed in a “haha too real” kind of way. In case it wasn’t obvious: The Beaverton is a satire site]

On today’s issue of “no shit Sherlock,” a rightwing radio host is on the cusp of an existential crisis as he questions his involvement in a fact-averse American electorate:

“We’ve basically eliminated any of the referees, the gatekeepers. There’s nobody. Let’s say that Donald Trump basically makes whatever you want to say, whatever claim he wants to make. And everybody knows it’s a falsehood,” he explained. “The big question of my audience, it is impossible for me to say that. ‘By the way, you know it’s false.’ And they’ll say, ‘Why? I saw it on Allen B. West.’ Or they’ll say, ‘I saw it on a Facebook page.’ And I’ll say, ‘The New York Times did a fact check.’ And they’ll say, Oh, that’s The New York Times. That’s bullshit.’”

According to Sykes, any attempts to continue fighting back against misinformation is dismissed with complaints that he has “sold out,” adding, “Then they’ll ask what’s wrong with me for not repeating these stories that I know not to be true.”

Sykes warned “There’s got to be a reckoning on all this.”

“We’ve created this monster,” he warned. “Look, I’m a conservative talk show host. All conservative talk show hosts have basically established their brand as being contrasted with the mainstream media. So we have spent 20 years demonizing the liberal mainstream media. And by the way, a lot has been justifiable. There is real bias. But, at a certain point you wake up and you realize you have destroyed the credibility of any credible outlet out there.”

“And I feeling, to a certain extent, that we are reaping the whirlwind at that,” he continued. “And I have to look in the mirror and ask myself, ‘To what extent did I contribute?’”

Nope, couldn’t be connected with The Terrible Fascist Cheeto. Nothing to see here, folks. Remember: Feelings are facts, up is down, and Mexicans are taking yer jerbs, and if you pray hard enough you will be forgiven for being a selfish piece of… work.

The Star profiled the Stocker-Witterick family back in 2011 when they decided not to assign a gender to their child based on the child’s genitals. Now in a follow-up interview, they discover the shocking truth of this parental abuse, this destruction of the fabric of society, this insanity!!!! 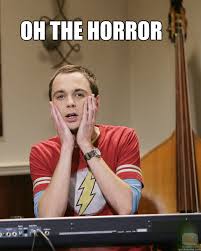