I know it’s weird to consider volunteering self care but I am in dire need of a long term unplug. The entire US Election was a months-long trigger for all the nastiness that gets bottled up from a sexual assault, and then even more news hit my feed from abroad which was just a bit too much.

If you’re going to (link NSFW) Edmonton Taboo, I’ll be at the Alberta Sex Positive Education Community Centre’s booth. Look for the tiny person in a flowery dress and combat boots. Brown pixie cut, beanie, Pride bracelet. That’s me. Come say hi. Or don’t, I’m not the boss of you. I’m there during the day today and tomorrow. Tonight I might poke around the dungeon.

In sparse Good News Land: Bill C-16 passed in the House of Commons and is now on to the Senate.

Take care of yourselves.

Vivaldi’s Four Seasons is probably one of the more immediately recognizable pieces he ever wrote, with the Spring almost always garnering the “hey it’s that song!” response from anyone listening. But as we’ve mentioned before on this blag, my love of Vivaldi’s work stems from his metalhead pieces. While Spring is indeed beautiful and calming, I have the utmost admiration for Summer, which at its peak is played up to a blistering ~180 beats per minute with up to 4 notes per beat.

In fact, the song is so intense that when I went to see it live a week ago, the soloist shredded their fucking bow at the end of Summer’s final movement.

Vivaldi: Trashing his instruments before it was cool.

Siobhan dressed up for the orchestra

Special thanks to We Hunted the Mammoth for inspiring today’s Self care Saturday.

I’ve been despondent for some time because I haven’t had many opportunities to engage in one of my favourite hobbies: Boot blacking. But a friend of mine got married at the beginning of October, and a few days before the ceremony asked me to polish his shoes. I was thrilled! 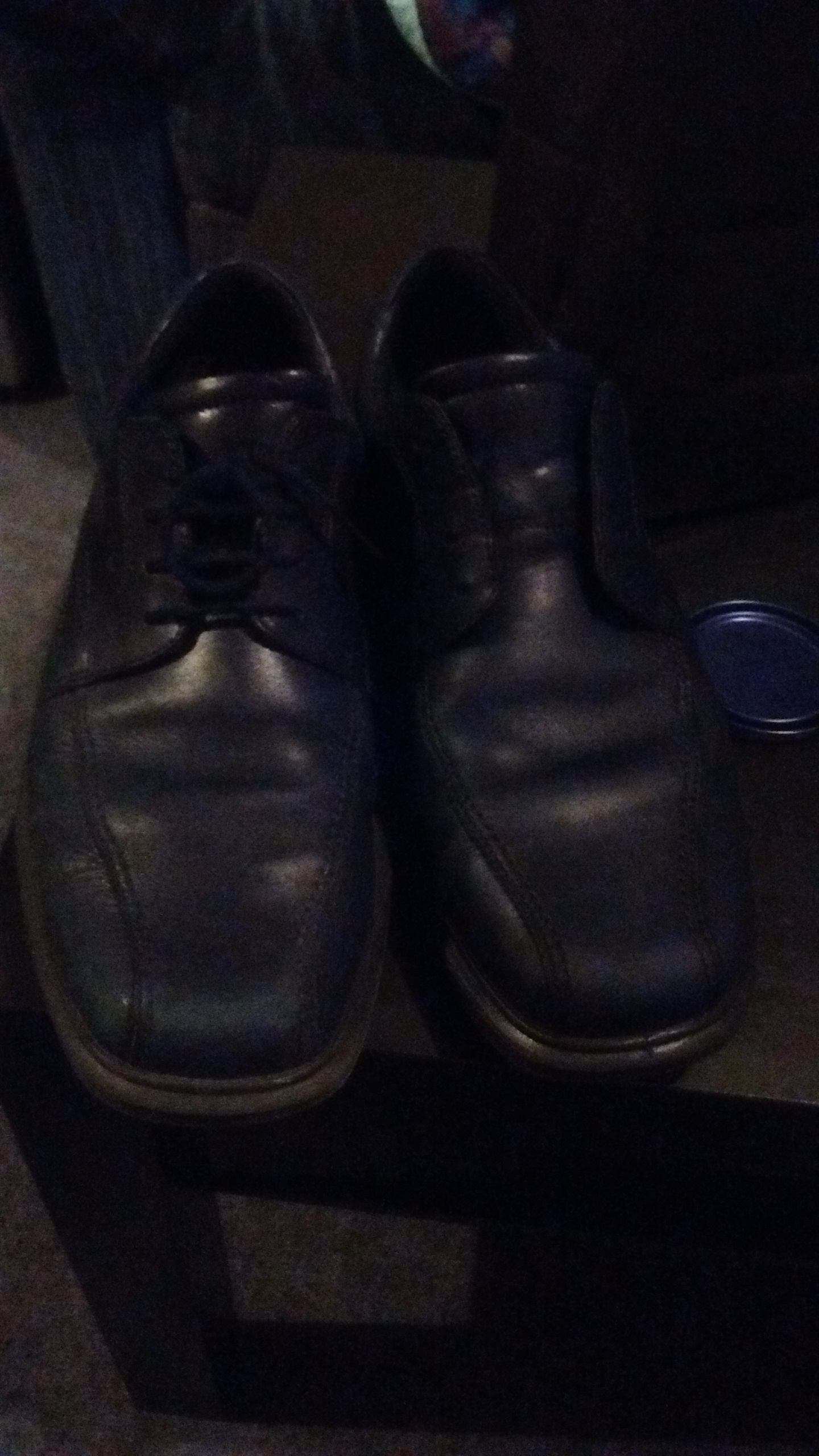 With this pair of shoes, most of the polish was kicked off around the toe and heel. The scuff marks were a shade of light gray–by the time I was finished with leather conditioner, the scuff marks themselves had been rendered completely invisible to the black leather around them, with the toe having regained some of its shine. The groom only gave me one day to do this; if I had more time, I would’ve been able to apply several layers of polish and get the toe really shiny.

The first step is to clean the leather. I dampen a cloth and then apply a very small amount of saddle soap–about the tip of my finger–and apply the soap in a circular motion. The soap foams and wipes away the dust and dirt on the surface of the leather. I then take a dry cloth and make the same motion to wipe away the foam and water. This alone makes the leather much darker if I’m treating a brown or dyed leather.

The next step is to condition the leather. I like Huberd’s the most for this step for multiple reasons. For one, the product is non-toxic, and therefore safe to touch and breathe; two, it doesn’t stink too badly (it smells and tastes* like bacon); three, it’s inexpensive. The downside to Huberd’s brand shoe cream is that it only comes in black, as far as I know. I prefer to work Huberd’s into the leather with my bare hands, massaging it in a circular motion. Huberd’s restores some shine, but its chief purpose is to water- and winter-proof the leather.

The last step is to apply polish. For leather that has just been cleaned and conditioned, I typically apply a modest amount to the toe and leave it at that. Getting a proper shine takes one treatment a day for several days in a row. It’s not a process that can be rushed, which is why if you have your boots blacked somewhere and your boots are messy as hell, you’ll mostly get cleaning & conditioning rather than a good shine. In fairness, if you bring us boots caked with mud, then just cleaning your boots is probably enough to make them look shiny in comparison.

I figure I can be satisfied with essentially erasing the scuff marks and restoring some sheen in time for the wedding. More importantly, my kit has been restocked, and the new dungeon run by Not Dipshits in town means I might have a slough of customers with boots to service. Yesssss. 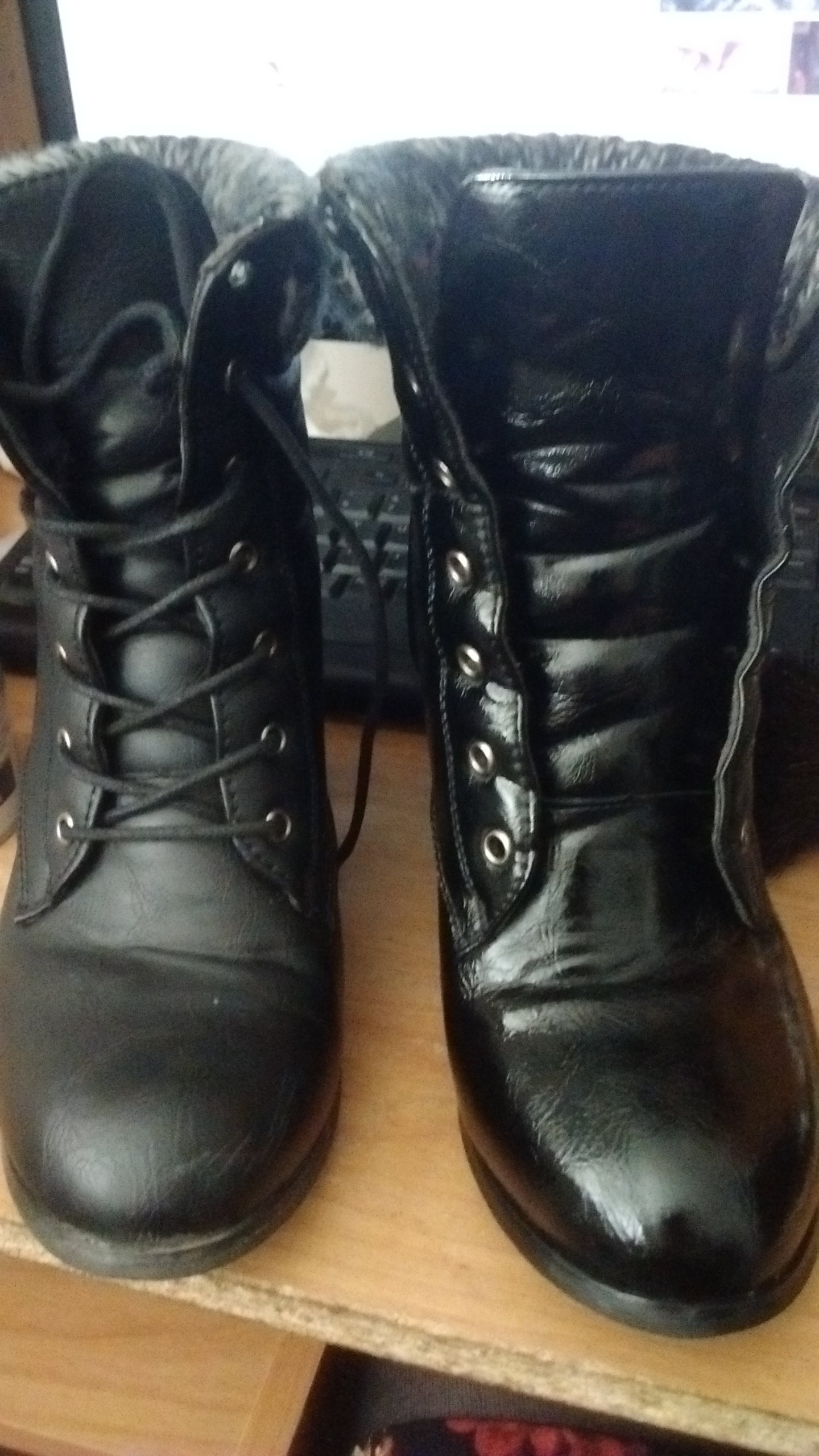 My sassy boots. Left: Before. Right: After. LITERAL REFLECTION

*Huberd’s non-toxicity comes in handy when you’re a kinky bootblack. That’s because: 1) if I like you; 2) and we’re flirting; 3) and you consent to it; there are–uh–alternative ways to deliver the leather conditioner besides with one’s hands or a cloth, a “special service” that I offer selectively. Hence why I know what it tastes like. Huberd’s isn’t particularly edible and I definitely don’t recommend swallowing it, but it has never made me ill when I’m going “up and beyond the call of duty” to a Dom/me who consents to receive it. It’s just beeswax and pinetar. That said, if you have any canker sores, it stings like a bitch. Depending on who you’re special servicing, that might be a feature and not a bug.

I’m tempted to put this on my dating profile:

END_OF_DOCUMENT_TOKEN_TO_BE_REPLACED

Thanks to the internet, we have access to the archive that encompasses the entirety of human knowledge in one easy-to-reach location. Behold, the product of combined human knowledge:

There are a few references you might not get if you’re not aware of Day Z, a zombie survival game with other players. What these guys depict is… honestly not that far off.

White Lightning HQ does similar skits for all kinds of games. Definitely recommend them.

That last chat was with our DJ. At one point she asked me what kind of music I was into and I answered truthfully, “nothing like this [club music], I usually listen to classical.” She gave me a look that I understand to mean “challenge accepted,” and she put on this, and then remixed it live:

I had mentioned my preference mostly off hand, and found it very suave of her to put something on that she thought I’d enjoy. As it turns out, I do enjoy it, and now have a bizarre electrorave classical genre to dive into thanks to her.