I’m not sanguine about the positive effects of gun control. There are lots of people stirring the pot, trying to think of effective measures, but I can pretty much guarantee that they are barking up the wrong tree.

Without getting into detail about “what is an assault rifle” it’s a non-starter, in my opinion, to argue about that stuff. We’ve already seen that gun nuts will game whatever rules are put in place, with bump stocks, trigger cranks, whatever. As someone who spent my share of time with an M-16 in hand (mostly in 1983; in my reserve unit I carried the M-60) I can’t see any excitement to firing a full-auto weapon. It just means you don’t hit a damn thing. I’m kind of old school about that, and I think the army should have never gone with higher fire-rates than tri-burst; perhaps I have read too much George MacDonald Fraser. [gmcdf] My interest in guns is on the same axis as nihon-to, Japanese swords: good design and aesthetics. I used to regularly laugh at the pathetic quality of the M-16 when we really hammered them on the range. When you clean them, there are these little gas-rings on the bolt that you have to make sure are not lined up, because the gas can bleed through this gap in the gas-ring and then the action won’t cycle; it has to be staggered. What a ridiculous design! A keyed gas-ring and a key on the bolt would solve that problem, it’d just take a tiny bit more machining, and the rifles are junk – someone decided it’s just not worth it.

I’m exposing this stuff because I know there is a large body of gun owners who consider themselves safe and harmless. For one thing, when you get an assault charge with a deadly weapon, plea deals almost always include that you won’t have access to your firearms for ${a while}. When I got my dust-up with the law, I had to get rid of all firearms for 2 years, which meant that they all wound up coated in oil, vacuum bagged, stacked in the uppermost hay loft of my barn. [Don’t ask, I don’t think I’m ready to talk about it] Anyhow, the vast majority of gun owners are harmless collectors. Maybe what they are collecting is dangerous, but for them, it’s a different obsession. For one thing, among the hard-core gun nuts that I know, there is no bluster about how it’s for home defense. They all know that having more guns than you can carry in the back of a Chevy Suburban does not increase your self-defense at all. Arguably, one gun might suffice, but a truck-load certainly will not.

I spent 10+ years shooting paper targets with handguns and long rifles. It was calming, during a high stress period of my life. I’d sit there at the bench behind my sniper rifle (a Sako TRG-21S with 10x Swarovski/Kahles scope) and control my focus and my breathing, until I could reliably shoot the cap off a coke bottle at 200M. Honestly, I felt more like it was meditation [cue a bunch of bushido warrior meditation bullshit, some of which is true] because I really did sort of feel my intent floating out of my body and becoming just my will, the crosshairs, the trigger. It became less interesting/fun once I stopped missing. But the sensation the whole time, was that of a difficult sport requiring high mental focus. I was also practicing Iaido at the time, with live steel like you’re not supposed to, and that had a similar effect. I mention that because sometimes people make the mistake of trying to frame guns as a penis substitute, and a mere gun cannot stack up against a sword in that regard. So, mock me on that axis if you think you’re qualified. 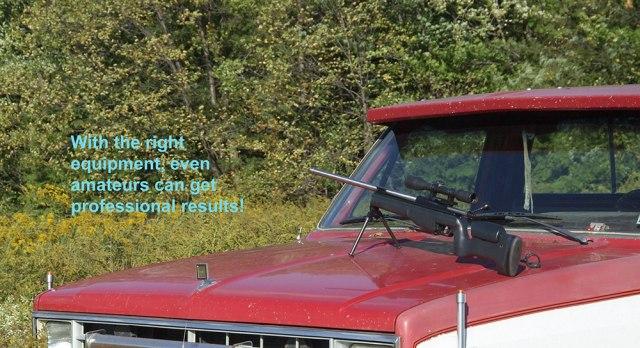 [Illustration from an old article about the kennedy assassination, on my ranum.com site. I need to update it and perhaps post a shorter, tightened-up version here]

There’s a sort of community at the range, which is not bad. The Maryland State Police had a range of their own, which they closed, so they sometimes showed up at the range where I shot. I remember one time there was a bunch of cop assholes wearing windbreakers that said “TACTICAL TEAM” on the back and they were crowded around a McMillanized Model 70. They were taking turns and bullets were all over their paper at 200yd. I snorted and kept my routine. Then there was a break and one of the cops sauntered over, looked at my Sako, and asked, “what is that?!” I replied, “Finnish army sniper rifle.” Looked through my scope at their target and said, “you dialing in your optics?” The cop said, “No, it’s zeroed. Why?” “You’re all over the map, here, take a look at mine” and handed him the spotter scope. I was working on a nice .5″ group at 200yd and had about 5 holes in it. The cop said, “holy shit!” and I said “that’s why I thought your optics were off.” Then he asked me what I did for a living and I replied, “I run a software company.” Badum-tschh. Cops are, in my experience, some of the worst shots. They sometimes would bring a bowling pin or two and .45s and try to hit the bowling pins with rapid fire. Mostly, all they made was noise.

Cops see guns as tools for doing their job, which means that they will never achieve the level of focus and appreciation that a hobbyist can. But, what I found interesting, is that a typical, i.e.: the vast majority, hobbyist is not sitting there imagining they are shooting schoolkids. They’re just relaxing and enjoying the fusion between an expert and their tools. When I am turning a bowl on the wood lathe, I go to the same place – my happy country – where it’s all skill and will and reaching for beauty. Yes, there is beauty in shooting the caps off 3 bottles at 200yd in a row; it doesn’t matter if you have an audience – it’s satisfying. There are doubtless some cops that are gun nuts, but because it’s their tools, there are probably few cops that are gun artists.

I’m not trying to defend gun ownership. This is me thinking out loud about some things. I remember many times arguing “Well, I’m harmless and for me it’s just a sport like Iaido or Kendo or Judo, or fencing.” My first awareness of the larger debate about guns in America was in the context of me being pissed off about the “open carry” jackasses and the spree shooters, who made the rest of us decent people look bad. Now, I know it’s much more complicated than that.

One aspect of the gun nut that we don’t take into account is the really hard-core nutty gun nuts. Like this guy:

Just looking at the wall in the opening frames I see multiple pieces of garbage based on AR-15/M-16 design. It’s not a matter of “why do you think you need that” it’s “why do you have that crap on display” to me. This guy may have a collection that he spent over $1mn on, but it’s like he’s a compulsive acquisitor; he’ll grab anything he can get his hands on, and stick it on the wall. I know he’s not using any/most of those guns because nobody is going to find cleaning that many AR-15 actions fun. Cleaning one isn’t fun. And I can say with some confidence that he’s not a shooter because a shooter knows that if you want to hit stuff, you practice with one rifle, and that’s it. Every rifle’s trigger has a different break-point and then there are scopes on what looks like every one of jackass’ rifles – I bet he never zeroes any of them. See what I mean? This guy is not a shooter; he’s a collector. He could be collecting pokemon cards, but he just happened to obsess over guns instead. I’m going to say he’s mostly harmless because he’s so in love with his collection that he’d never risk having the police or FBI seize it. if he did something wrong with any of it. 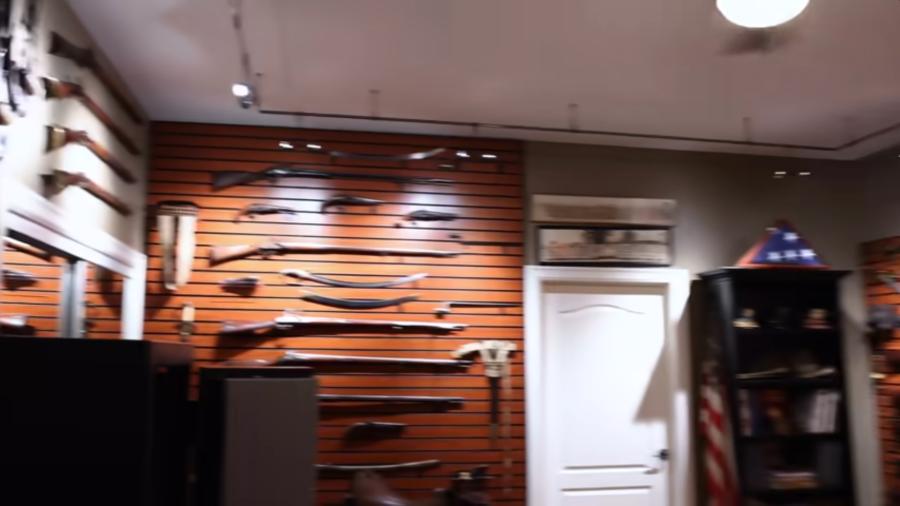 I mentioned in an earlier posting that this sort of super-collector actually own a significant portion of all the guns owned in the US. When I hear his voice, I hear a bit of the whine of desperation as he’s trying to justify “this is revolutionary war” and “this is civil war” – why? Obviously, none of this stuff is useful to him because one AR-15, even though it’s crap, is far more lethal than a Brown Bess. I felt the pull of collecting, once, when I was at an antique store in Paris and they had a boxed set of duelling pistols by Boutet a Versailles, but they cost as much as a Lamborghini. So much for that. They were beautiful, in their way, because of the quality of manufacture, but the carvings on them were really tacky. See? There I go. I bet this collector would have snapped the duelling set up and it would be a prize part of his collection. Still not as deadly as that crappy AR-15. Basically, this guy has a private museum he has spent $1m on, and I’m not sure if we have any business judging him. I’m also going to say that this guy is not the problem.

I was listening to one of Beau of the Fifth Column’s pieces and he pointed out a thing I’ve thought before (but he did it better than I do) which is that the guys who are the problem are the guys who think they are warriors not home museum-keepers. The guys, like Kyle Rittenhouse, who want to feel the burn of adrenaline as they step into the lists for their own Armageddon. Or the combat cosplayers who strut around in “battle rattle” and molle gear covered with Punisher patches, and “thin blue line” patches. Beau pointed out something that is profoundly correct: the premise of the 2nd amendment is that the state may become dangerous to individual rights, and therefore individuals may overthrow the state. The 2nd amendment nut who is leaning on the 2nd amendment and wearing the “thin blue line” patch is self-contradictory, because the 2nd amendment means that when the state gets oppressive, you’ll shoot cops. That’s why the well-regulated militia exists: to combat the state – not to serve the state as irregular bullet-sponges. I think we should be doing a better job of framing that meme to cops everywhere: when they’re open carrying they are not open carrying to protect democracy from the nonexistent liberal death-squads (‘cuz we don’t squad up) – they are there to hunt you cops. There, by the way, is one way to do something productive about the problem: does the 2nd amendment say “you can open carry?” No, it does not. It says you can keep and bear but it doesn’t say where. A state rights’ fan governor could pass laws saying “open carry all you like on property you own. Otherwise, it’s a felony.” Does it say you can open carry on the commons? No, it does not. Look at the way state governors were able to fuck abortion rights all to hell – you could do the same to gun ownership. $1m liability insurance required. Must have a certified range that meets ${criteria}. All gun repairs and part substitutions must be safety-checked and certified by a master gunsmith and oops we only have 5 in the state.