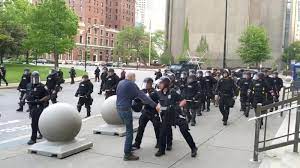 After a long enough interval to allow everyone to forget, an arbitrator [sel] hired by the state of New York has determined that Martin Gugino, the 75-year-old who was shoved to the ground and left bleeding by police – well, the police did nothing wrong. [guard]

In a decision on Friday, arbitrator Jeffrey Selchick wrote: “Upon review, there is no evidence to sustain any claim that respondents (police officers) had any other viable options other than to move Gugino out of the way of their forward movement.”

You can see, clearly, in the picture I included above that Gugino was completely blocking both the sidewalk and the street, and the cops had no other route that they could follow than to shove an old guy out of the way. The old guy, by the way, ended up with a broken skull and a brain injury – which were probably also a necessary part of getting him out of the way; the cops walked past and left him bleeding on the sidewalk to protect and serve him.

We are not aware of any case where this arbitrator has ruled against on-duty police officers, so his ruling here on behalf of the police was not only expected by us, but was certainly expected by the union and city who selected and paid him,” Melissa Wischerath told the newspaper.

The Buffalo police commissioner, Joseph Gramaglia, said he would reinstate the two officers to duty on Monday, the newspaper reported.

It’s good to know that those officers are back on duty; now they can get back on the payroll – they’ve been on unpaid leave. Typically in this sort of case, the “unpaid leave” cops’ salary is made for them by the police union (irony for anti-union fascists) and “go fund me” donations. After Donald Trump tweeted in support of the police (naturally) the cops’ donations were exceeding $30,000/week, which is more than a cop typically makes except if they’re on the take.

I’m still stunned by the way that “defund the police” morphed into massive increases in police funding, and this kind of shit. It’s pretty obvious to anyone that the police are in control of the government, hardly the other way around.

But that’s hardly the worst of it. There’s a recent paper in The Lancet that doesn’t come outright and say “they are lying” – it’s just that they’ve got their facts wrong. [lancet] 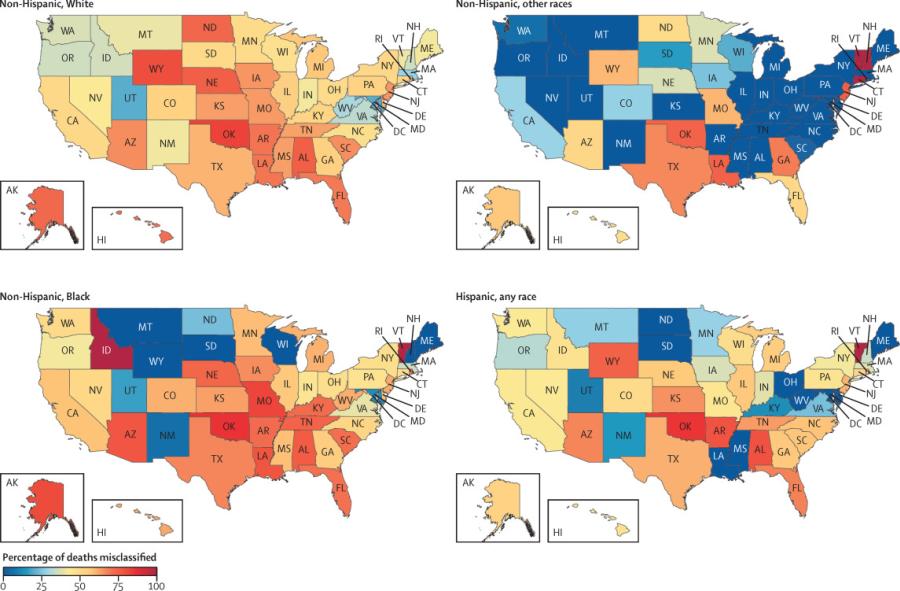 Figure 1 Percentage of police violence deaths misclassified in the NVSS by race, ethnicity, and state in the USA, 1980–2018 Moral: avoid Oklahoma and Vermont

I hope you don’t mind that I bolded the important bit above. The Lancet, hardly a left-leaning socialist mouth-piece, has re-assessed the reporting on police violence and found methodological problems that result in massive under-counting. Basically, The Lancet says, cops are killing twice as many people as are being reported. I’m not sure how Idaho has that deep purplish red color, which appears to mean that more than 100% of police killings are mis-reported if there is a black person involved.

So, if I parse the doctor-ese correctly, that means “a lot more black people are being killed than you realize” since the mis-counting is falling disproportionately on that group.

Remember: this is just killings – someone like Gugino, the 75 year-old who suffered life-changing injuries – he doesn’t appear in these statistics at all. Because usually the cops just beat you up and then trade not charging you with resisting arrest for sweeping the whole thing under the rug.

The police are an occupying power.