Armchair generals are going to be analyzing “prosumer” drone videos of the fighting in Ukraine for a long time to come. And, I predict, there will be a lot of harsh words for the Russians. Some of that will be fair, and some won’t.

One of the things that makes me grit my teeth when I look at the youtube comments is comments like, “Stupid Russians in tanks without infantry!” Let me get to that. 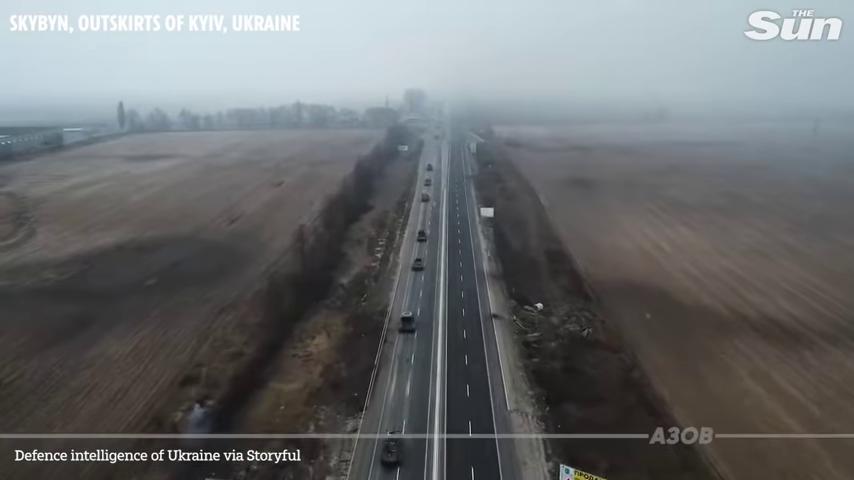 This is not an assault/close quarters combat; it’s a “route march” – i.e.: command said “go to XYZ and take up position, quell any resistance necessary on the way.” Those aren’t tanks. There are some tanks, but those are mostly armored personnel carriers. If they were assaulting a position, the infantry, who are in the armored personnel carriers doing the “personnel” part of being carried, would be deployed and advancing slowly with fire support from the armor and off-board artillery.

The scenario in these shots is ambush, not assault being repulsed. In other words, it’s exactly the kind of ambush against a column that I was writing about a couple days ago. [stderr] Comparatively, it’s a small column – it’s not one of the 40km cluster-columns and this isn’t Raate Rd.

Also, the Russians are learning: their vehicles are spaced so that there’s no chance of an artillery round blowing up several of them at once. 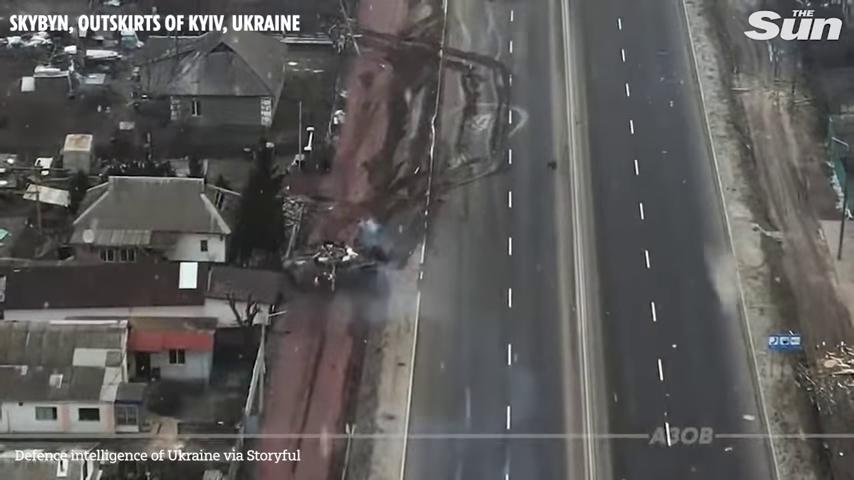 The lead tank, a T-90, appears to take some smallish arms fire. Probably an attempt to hit the commander. The commander’s riding up in the turret, unbuttoned, and they’re a popular target for sharpshooters. The tank (again, correctly) pops smoke and reverses. This a) gets them out of any potential incoming fire like pre-registered artillery and b) the smoke lets the rest of the column immediately see that something’s up. 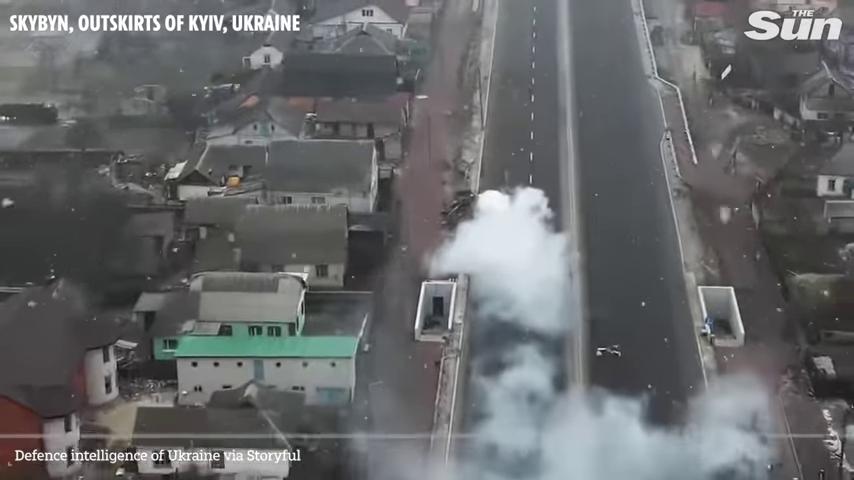 Again, the youtube comments are things like “Stupid Russians walk into an ambush!” Well, no. They were proceeding to try to get to where they were supposed to be and that entails moving through hostile ground because, in an insurgency, it’s all hostile ground. They are not stupid Russians. They are probably mostly terrified young men who’d rather be playing Call of Duty than living it, and there are maybe one or two sociopaths in their unit who think this is all fun. 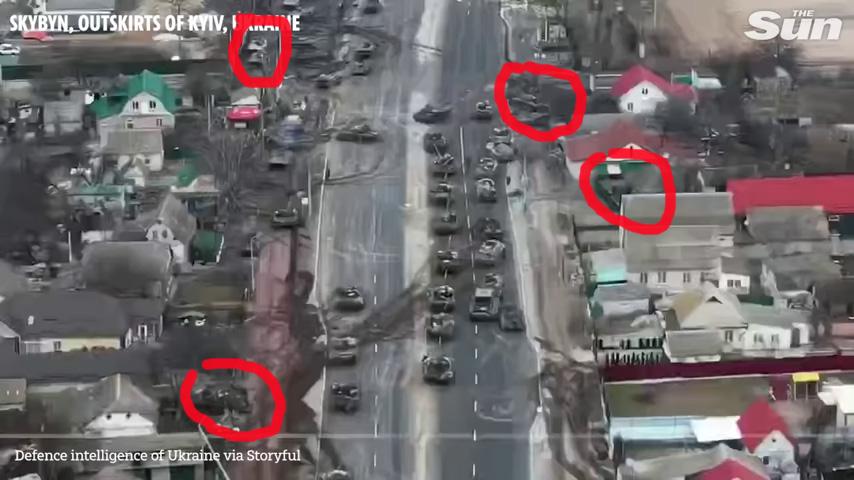 Now’s the bad part. Was this just harassment fire, or is this a serious ambush? The Russians aren’t being stupid and grouping up; the problem is that the column is still moving at the back end and it’s stopped at the front end. Now comes a sort of rapid parking shuffle as the various vehicle commanders place themselves out of the direct line of fire (they have no idea what direction the ambush is coming from other than “up”) Also there appear to be 2 TOS-1 MLRS vehicles attached to the column. Remember how, in the WWII movies, everyone tried to shoot at the guy with the flamethrower? The TOS-1 are not popular right now.

I circled a few of the better-positioned vehicles, just for the heck of it. The Russians are trying hard, after all, it’s their lives on the line. Like the BDRMs upper left, that decided to snug up against the concrete wall. It’s 50/50, they may be in cover, now, or they may be jack-lit. 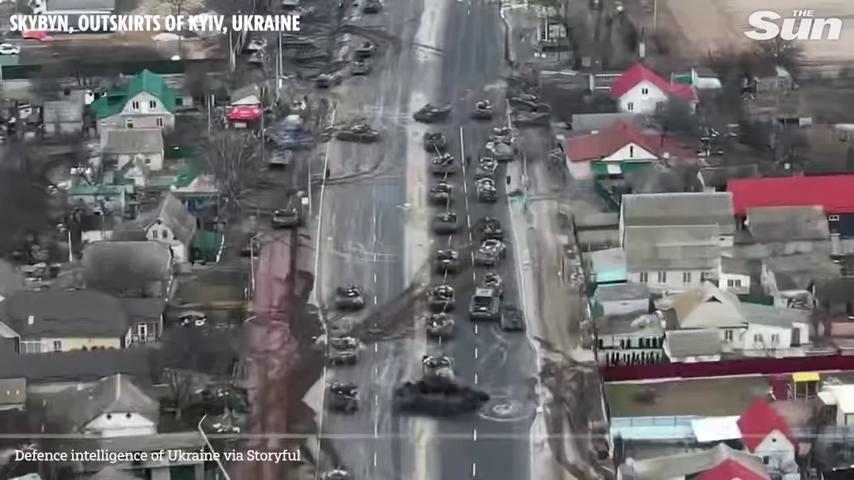 If you single-frame this, the artillery shell that dropped on the column-head blasts a circular spot in the road about 30 feet ahead of the tank. That’s not aimed fire; it’s probably pre-registered and it didn’t hit the t-90 because of random variances in the round, the gun bore, and high altitude winds. A friend of mine who was a major in the US Army artillery told me once that they could pretty much hunt deer at 10 miles with a 155 except for those 3 random factors. I’ve seen various bits of footage of Ukrainian artillery and it looks like they’ve got US-made 155mm Paladin self-propelled guns, just not many. And those that there are are probably in “shoot and scoot” mode because they are a very important target.

I’ve also seen pictures of the shrapnel patterns from those shells. The guys in the T-90 are fine, but they’re going to be stunned for a while. Look at the blast-wave reflecting across the street. There are also going to be a few random chances for absolutely horrific things from shell fragments. It’s random; most of the time you’ll be fine but sometimes the guy next to you gets turned inside out. Or sometimes you’re that guy. There’s probably a lot of yelling and cussing and Putin’s name being taken in vain. 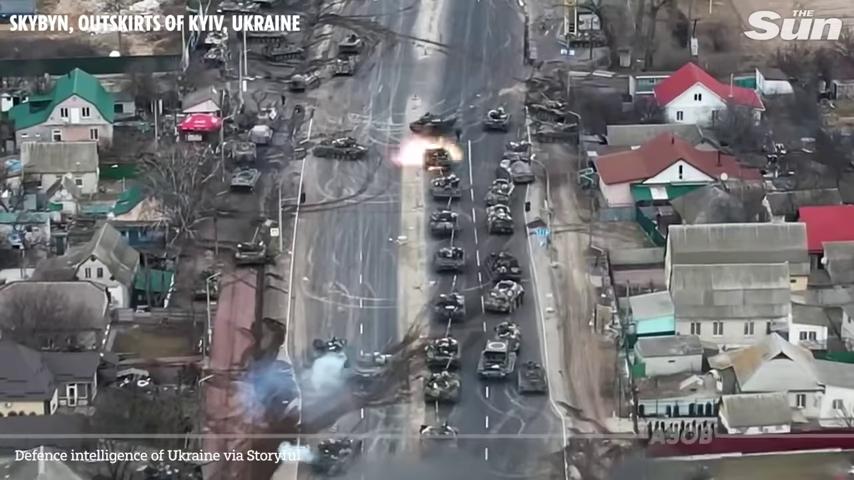 At the other end of the little cluster, we have 3 casualties: 2 guys who were out of their vehicles (why!?) and their vehicle. It looks like a T-90 and it looks like an NLAW or some other kind of ATGM. You can go back and forth a frame at a time and it’s not possible for me to see where the impactor came from. It wouldn’t be possible for the Russians, either.

Also, I mis-identified what appears to be a fenced-in yard for a TOS-1. There is a TOS-1 down there but it’s stuck in the middle of the road. It’s the blocky thing with the giant white target-circle painted on the top (WTF, Russians?)

Things have gone from “bad” to “worse” and are veering toward “truly horrible.” 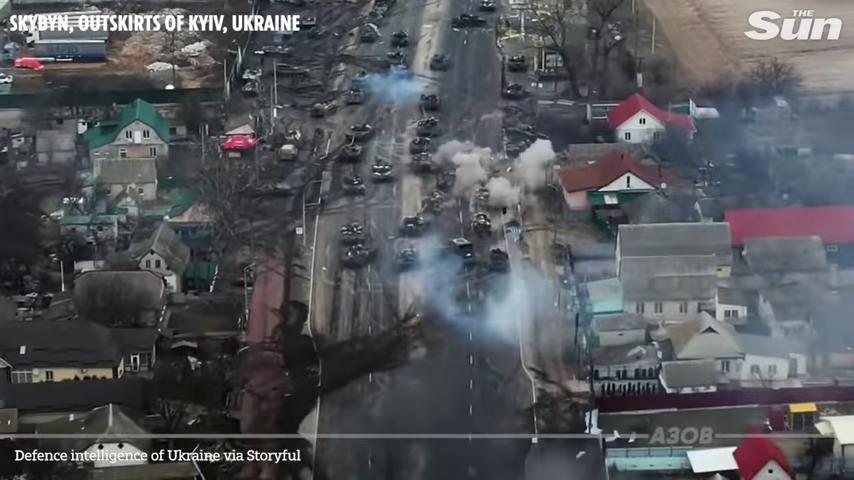 One of the other vehicles comes under some kind of heavy small-arms fire (I think). If the ambushers were US troops, I’d guess it was an automatic grenade launcher or something like that, but this might be a classic RPG-7 or something like that. It’s gutsy, no matter what – that’s a big wad of Russians and they just saw a few of their guys vaporised. They are going to blow the snot out of anything they see moving.

At this point, traditionally, an ambush would take one or two more shots then scram (“di di mau”, Vietnamese for “get the fuck outta here”) I haven’t seen anything that looks like an attempt by the Russians to return fire – they still probably have no idea where they are being attacked from. That’s an important point: they don’t know the size and composition of the ambush, but they can tell that the ambushers know what they are doing, and have someone with a 155 on the telephone. Just typing that makes my knees feel weak; I would not like to be there, sitting in a tin can waiting for the sky to scream with incoming artillery. As Sazz said, “if you hear it you may be OK; it’s the ones that you never heard that got you.”

Then, something I don’t comprehend happens: the TOS-1 appears to hip-shoot a round at something and the whole column decides it’s time to be buggering off. 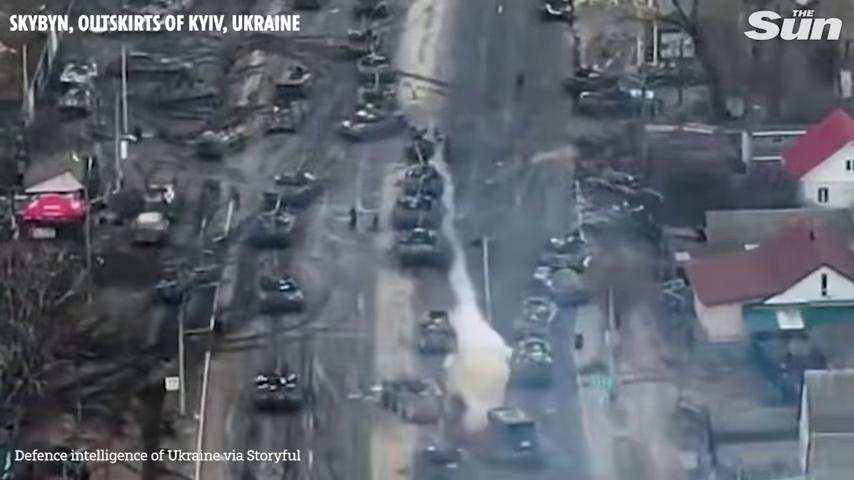 But I’m not sure if I am interpreting that correctly. I mean, I’m right about the “buggering off” bit, but MLRS launches produce a lot of back-blast and there’s no sign of gigantic plumes of flame coming out the back of the TOS-1. On the other hand, that’s not an ATGM hitting the TOS, either, because there’s an absence of humongous explosion. If it’s a near miss it’s really near, like near enough to blow a track off the vehicle. (A TOS-1 is an old T-72 chassis with an MLRS head replacing the original turret).

I don’t know the Russian for “let’s get the fuck out of here” but it appears that everyone pulled a tight 180 and the column’s on the move again, advancing toward the rear. One burning Russian T-90 marks the score. The Russians probably never saw a Ukrainian and, if that was the TOS-1 taking a shot, it was probably “suppressive fire” i.e.: shooting at a smoke cloud where the ATGM was launched. Whoever took out that T-90 would have relocated immediately. 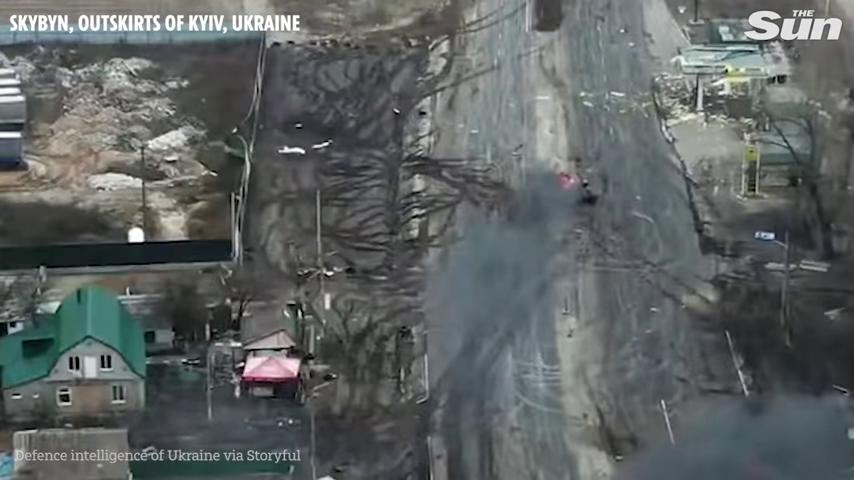 That’s what the Russians are going to be up against for the forseeable future. Low-cost attacks that don’t just kill and destroy, but re-write the Russians’ tactics. Somewhere, whoever ordered that column to go from Point A to Point B now has to get on the phone and repeat that order, or figure out where else that column should or could be. It becomes a cascading error. What if that column has a logistical train that’s going to the destination via a different path, and the logistical train gets there but the column doesn’t? The commander has to sort all of that out, with partial knowledge, in real-time. Back in Gulf War II there was that US logistics unit that got turned around and wound up driving around trying to locate their unit, and found a bunch of Iraqis to surrender to, instead. [That was my old reserve unit! 95 ARCOM]

Here’s what I find fascinating about that video: nobody fucked up. Both sides followed fairly sensible doctrine, given the unsensible situation they found themselves in. When that happens, and everyone follows doctrine, then the war becomes a numbers-game. What we just witnessed was “attrition in action.” A tank and a couple of guys were traded for a missile that was, basically, free, because it was paid for by some British taxpayers. Every time the Russians are subjected to a trade like that, their chance of “winning” in any meaningful sense goes down. Meanwhile, every doctrine framework will tell you that the Russians are about 500,000 men short to take and hold an area with a population the size of Ukraine. I remember the jokes during the Iraq war about the “Rumsfeld Doctrine: you take just enough troops to lose.” That was funny but it turned out to be exactly correct: the US was able to defeat the Iraqi military with a small, overpowered force that could win at any point of battle – but there was no way for that small force to exert control over such a large population. The US needed about 500,000 troops to control Iraq, too. More for Afghanistan because of the terrain.

My sympathies to all involved; it’s a shitty situation brought on by humanity’s bad tendency to put the worst people we can find in positions of power over us all.