This time I’m going to go a bit far afield. I want to look back at media reaction to a stupid event that happened in 2004. I was on a consulting gig in some town or other and happened to turn on the TV in my hotel room for background noise, and saw the whole thing, live, and did not care very much one way or another.

I’m referring, of course, to the sportsbowl halftime show, in which Justin Timberlake did a spectacular “finishing move” and ripped one of the cups off of Janet Jackson’s armor bustier, revealing her nipple. America collectively recoiled, or something, and there was immediately a ton of finger-pointing and swooning on the fainting-couch. The incident is described [wik] as a “controversy” and I swear I was shocked to find out a week or so ago that there was an actual documentary put together about the incident.

There is a whole lot that can be commented upon regarding the white supremacist policing of black womens’ bodies, and the implied non-consensual nature of Timberlake’s move, and I don’t want to contribute to all that stuff except to say this: whatever marketing asshole cooked that up is a disgrace to a disgraceful profession. Worse, rather than simply falling on their sword and saying “we’re sorry, we were assholes and we thought we’d sexy the show up a bit and everyone involved was agreeable to it.” But once the lies started, there was basically a really stupid cover-up and it’s a cover-up that appears to continue to this day. 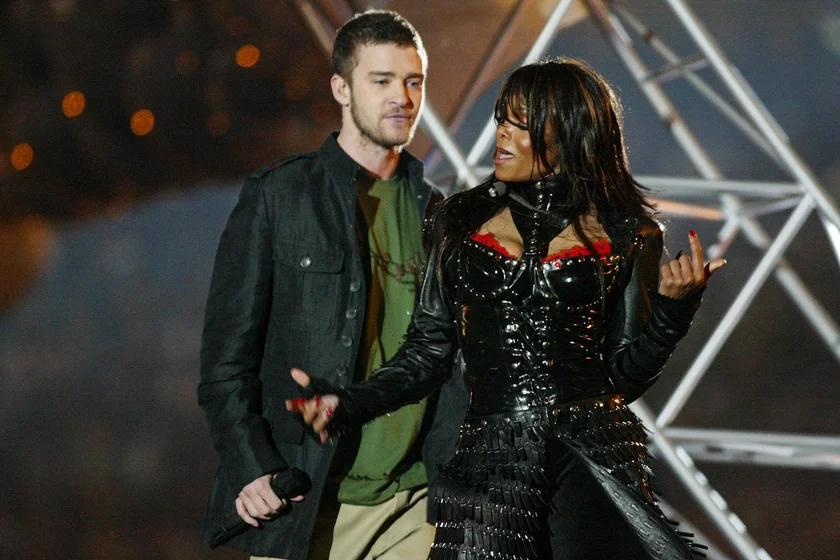 I have nothing against Jackson or Timberlake, and – while I prefer musicians to performers, what they do takes undeniable skill. Or practice and a top-notch choreographer. [Paula Abdul did all the choreography for Janet’s breakthrough performance on Nasty Boys and if you go back and watch the videos of that, they are beyond cringe-worthy. Janet did a lot of improving and hard work.] That’s an important point, though – those stage shows are thoroughly choreographed. Every move is choreographed. Every move. So, this story about Timberlake just, I dunno, ripping Janet’s bustier apart – it’s bullshit. Why should I even bother trying to convince you? Because you should despise the media and the marketing assholes that run it, and understand the kind of petty shit they are willing to lie to you about. It ought to make you wonder how well they cover important topics. 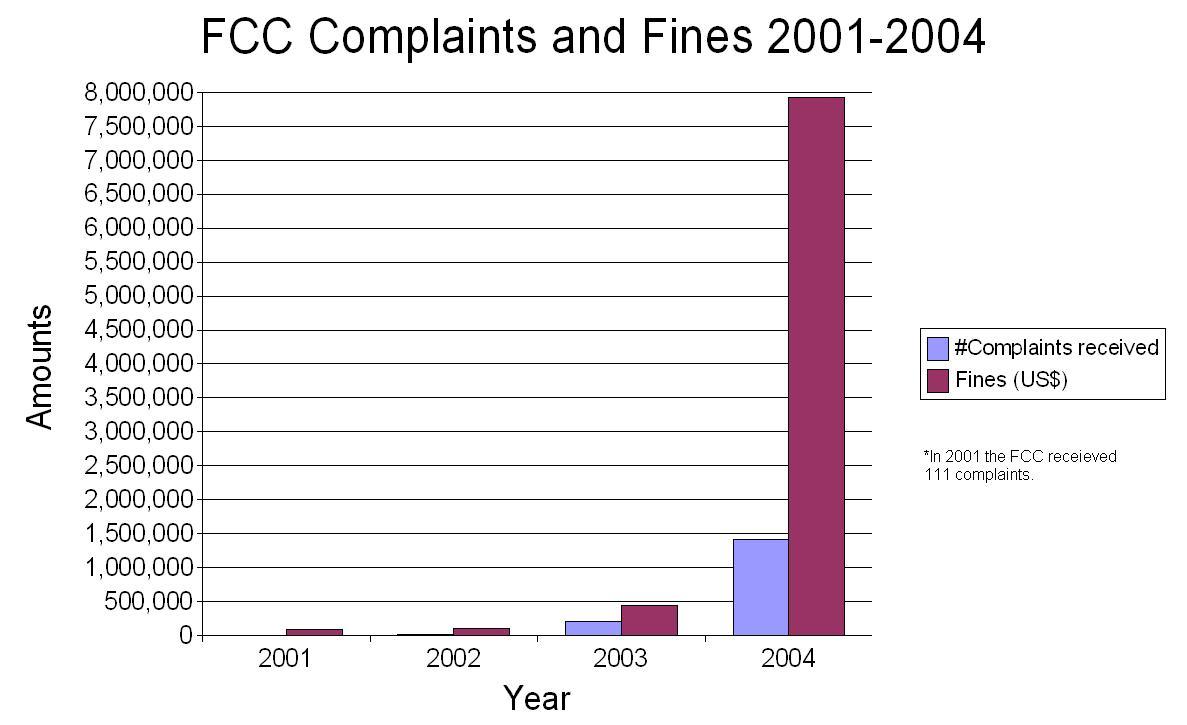 Americans complaining to the FCC about Janet’s nipple. They should be complaining about marketing assholes, but they weren’t visible

First, you kind of have to admire Janet for performing in that rubber lashed-together armor-looking stuff. From the way it swings, it’s heavy, and rubber is hot. The bustier cup that Justin ripped off is her right one (left in the picture) and you may notice something about it: 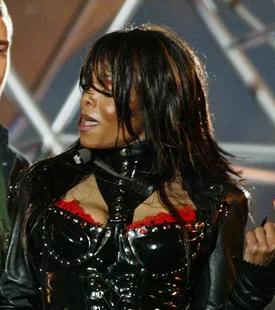 Between 2000 and 2007, I was married to a leather-worker/saddle maker and I dabbled a bit, myself. One of the other things I did was rig fastenings for the saddle maker; I knew my chicago screws, pop rivets, quick-set rivets, copper bar and disk rivets, and even did a few simple stainless steel polished carriage bolts for some dressage saddles. That’s why I’m qualified to comment on this “issue” and resolve the “controversy” – there was no “wardrobe failure” the bustier cup was designed to come off and that’s a fact. 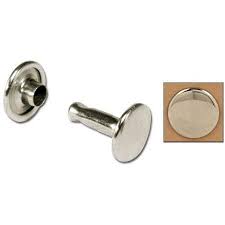 The way the piece appears to be constructed is with a row of quick rivets along the bottom of the bustier cup, which is fairly typical construction (if you want something to look punk and rivet-y instead of stitched) but that’s not how the break-away cup was constructed. The cup has quick rivets along the bottom edge, except they don’t actually attach to the fabric underneath. Note the rivet in the illustration is double-ended; there’s no nasty sharp edge there to snag a boob on the way off.

If the rivets attached through the fabric, which appears to be pretty thick “pleather” (rubber/polyurethane fabric) you could practically hoist Janet into the air using the bustier-cup as a hold-point. The reason people use rivets and leather is because the stuff is tough. Rivets do not just pop off.

Unless the rivets are just for show, and the bustier cup is held on with a couple of snaps.

In fact, you can see that in the illustration above because the bustier cup isn’t holding any of its shape. The purpose for that sort of inset assembly is so that the fabric curves and forms a cup, stressed by the attachment point. That’s a fairly typical leather-worker trick; it’s how, for example, the brim of a cap is attached so it curves.

There’s the whole thing. And, in context you can tell that it was a planned “finish move big reveal grand finale oh so edgy” because Justin’s got to kind of fumble for a grip on the edge of the cup and – ta-DA! Marketing! It even ends with fireworks (or a bang) and for some reason (more Marketing!) the marquee blinks “CHOOSE.” Uh. 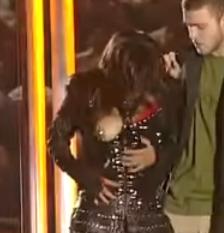 But look at the “wardrobe failure” – notice what a leather-worker would notice? No rivets. No holes. Just 2 studs. Those are leather buttons; which are great for making bag closures; you punch a hole for the button and then slit it so the head of the button can fit through. At a casual glance they look like rivet heads until you pull off whatever they were holding.

Sam Browne buttons are great closures; I use them all the time. I recognize them immediately. Ironically, they’re a pretty good way of attaching something for quick removal in a way that won’t pop off by accident; they’re a common feature on western revolver holsters.

I guess there’s no real point arguing about all of this, except that I don’t see what the argument is. The whole thing was planned and choreographed. Justin fumbles around a bit like a badly programmed robot, and – wow – so fucking what?

What’s interesting about all this, to me, is that the media pretended to buy the “wardrobe failure” story and then had to keep sticking with it going forward. Completely absent is commentary from the person who made the bustier because they’d have said, “yeah the cup was held on with sam browne buttons; they said they wanted it removable.” What a pathetic maneuver – someone’s big idea blew up wrong so they just blamed, I dunno. You’d think that with millions of fines at stake, the NTSB failure analysis team would have been called in or something. Instead we got a big lie about a little insignificant thing. What a crock.

There’s a lot more to the story, which is that the outcry appears to have been mostly a chance for subconscious or conscious racist football fans (which is to say, a lot of them) to rain shit at a black woman. This stupid marketing bodge became stumbling block in Janet’s career and more or less had no effect on Justin’s. America recoiled at the sight of a nipple; I recoiled at Justin’s empty stage presence, bad timing, and lack of courage. Why couldn’t he have just said, “MTV’s marketing people suggested we do that, and I did and we practiced it a few times and it was the big ‘edgy’ finale” – in the long run, MTV couldn’t do “edgy” right.

In order to organize my thoughts and get screenshots for writing this, I had to watch that wretched performance a couple of times. One of the other things I noticed is that Justin’s “dance” is basically he’s stalking Janet and when he finally catches up to her he rips off a piece of her clothes.

Unfortunately, the incident appears to have killed the wrong career. The unnamed marketing geniuses who came up with that collection of bad ideas are the poets of catastrophe that brought this disaster to fruition. I can’t blame Janet, whose publicist probably sold her on the idea (“the MTV people say it’ll be great publicity! So edgy!”) and I can’t blame Justin, though to my taste, he looks like a swirl of bad marketing and mediocre choreography. [Remember when they were trying to say Justin was the next Michael Jackson? Yech.] The whole thing is a shit-show and the media sniffed at the fecal reek and decided to let an obvious, stupid, lie stand. And then, they promoted the lie. It’s pathetic that Americans are so repressed that they collectively freaked out about this incident; nipples are not a big deal – most of us have a few. (I knew someone who had 3, so…) What jackass decided there needed to be a documentary about this, anyway? Or is it just another chance for one branch of media to sneer at another for being shallow and lacking integrity? Surely they all know they live in the same glass house and should not hurl rocks.

Anyhow, Sam Browne buttons are great fasteners for lots of purposes, aren’t they?

Also: memo to media – adding “-gate” to the end of something does not make it a catchy way to imply it’s a scandal. It’s just unoriginal. Reporters are supposed to be masters of language, and adding “-gate” just shows how unhip you are – did it never occur to journalists that referencing something that was the hot item when I was ten is maybe not the groovy thing? Using the language of “gate”-gate is so hip it’s right out of the Nixon administration, man. We finally got out of Vietnam, and the media can get out of its linguistic rut, now, too.

Nice Ash » « Sunday Sermon: On Being a Dangerous Person