“Gamesmanship” is what they are describing, here: wait until you know that everyone has committed to getting something done by a certain date, then threaten to implode all their efforts unless you get what you want. I know that’s how politics is done, but I think gamesmanship is dishonest because, in principle, you’re negotiating openly for what you believe, but suddenly you reveal that you’re willing to play tricks to ‘win’ – obviously, if you need to play tricks, your ideas can’t stand on their own merits. It works, of course, which is why it’s done that way. Over at Politico there is a description of how the COP26 statement was sand-bagged at the last minute. [pol]

GLASGOW, Scotland — In a room behind the plenary hall at COP26 in Glasgow, the four biggest greenhouse gas emitters on the planet sat in a circle on Saturday evening and brokered a last minute deal to weaken a global pact to phase out coal power.

At issue was a last minute demand from China and India: Water down language in the Glasgow Climate Pact that called for a “phase out” of coal power. Instead, Beijing wanted the wording to be “phase down” and New Delhi only wanted it to cover “inefficient” coal, according to an EU official who was in the room.

The atmosphere was tense. The Chinese were willing to put the whole conference was on the line. “We will break the whole thing down,” said one Chinese delegate, according to the EU official.

What the fuck is “phase down” anyhow? It hardly matters – the biggest polluters, including the USA, have already said that they intend to continue to increase emissions until at least 2050. The best that we can hope for is that they will slow down the rate of increase – hardly a “phase out” or even a “phase down”; in other words the entire premise of the meeting is a lie. The entire system is conspiring to defend the status quo, which happens to be inimical to life on Earth. If there are humans still around in 2200, they’ll be asking “why didn’t the people of the time rebel, and hang those bastards while they still had a chance?” Good question. 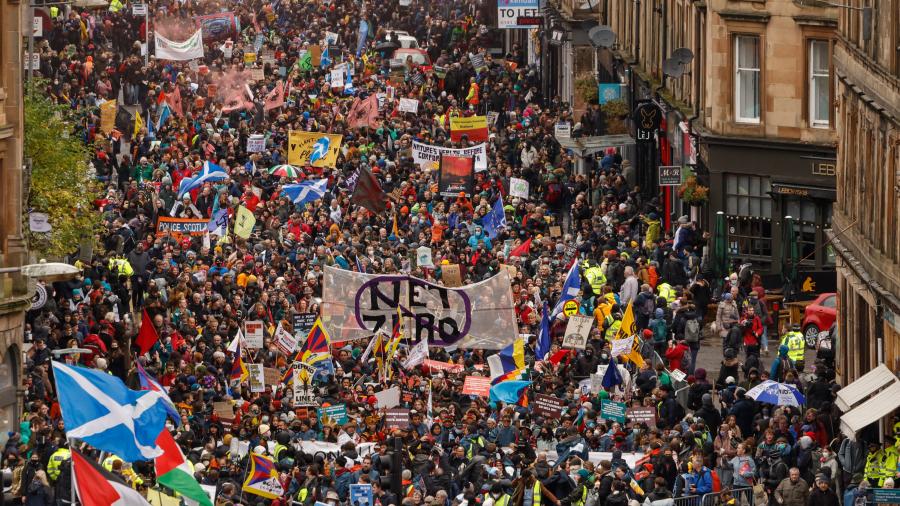 I know I’ve been referring to Amitav Ghosh a lot, lately, but there’s a whole section in The Great Derangement in which he describes how the intelligence/police state has oriented itself toward suppressing protesters – especially climate protests – a sort of tacit admission that they knew this was coming all along and it was all, always, about keeping order more than anything else. Preserve the government means you can preserve the status quo and preserve the status quo means you can keep burning the coal until your clock runs out.

The public politics of climate change is, itself, an illustration of the ways in which the moral/political can produce paralysis. Of late many activists and concerned people have begun to frame climate change as a moral issue. This has become almost a plea of last resort, appeals of many other kinds having failed to produce concerted action on climate change. So, in an ironic twist, the individual conscience is now increasingly seen as the battleground of choice that is self-evidently a problem of the global commons, requiring collective action. It is as if every other resource of democratic governance had been exhausted, leaving only this residue, the moral.

This framing of the issue certainly has one great virtue in that it breaks decisively with the economistic cost/benefit language that the international climate change bureaucracy has imposed on it but, at the same time, this approach also invokes a politics of sincerity that may ultimately work to the advantage of those on the opposite side, for if the crisis of climate change is to be principally seen in terms of the questions it poses to the individual conscience, then sincerity and consistency will inevitably become the touchstones by which political positions will be judged. This, in turn, will enable deniers to accuse activists of personal hypocrisy by pointing to their individual lifestyle choices. When framed in this way authenticity and sacrifice become central to the issue, which then comes to rest on matters like the number of light bulbs in Al Gore’s home and the forms of transport that demonstrators use to get to a march.

I saw a particularly telling example of this in a TV interview with a prominent activist after the New York climate change march of September 2014. The interviewer’s posture was like that of a priest, interrogating a wayward parishioner. The questions were along the lines of “what  have you given up for climate change?” “What are your sacrifices?” The activist in question was quickly reduced to indignant incoherence. So paralyzing is the effect of the fusion of the political and the moral that he could not bring himself to state the obvious: that the scale of climate change is such that individual choices will make little difference unless certain collective decisions are taken and acted upon.

Sincerity has nothing to do with rationing water during a drought, as in today’s California. This is not a measure that can be left to the individual conscience. To think in those terms is to accept neoliberal premises. Second, yardsticks of morality are not the same everywhere. In many parts of the world, and especially in English-speaking countries, canons of judgement on many issues still rest on that distinctive fusion of economic, religious, and philosophical conceptions that was brought about by the Scottish enlightenment. The central tenet of this set of ideas, as John Maynard Keynes once put it, is that by the working of natural laws individuals pursuing their own interests with enlightenment in condition of freedom always tend to promote the general interest at the same time. The everyday political philosophy of the 19th century, as Keynes described it, remains an immensely powerful force in the United States and elsewhere. For those on the right of the political spectrum this set of ideas retains something of its millenarian character with individualism, free trade, and god constituting parts of a whole but, by no means is it only the religiously-minded whose ideas are shaped by this philosophy: it is worth noting that the dominant secular paradigms of ethics in the United States, for example, as in John Rawls’ theory of justice, are also founded upon assumptions about individual rationality that are borrowed from neo-classical economics.

If you recall some of the things I said BG (“Before Ghosh”) I saw nationalism as the problem we needed to overcome in order to survive the climate crisis. Now, I’m afraid that I agree with Ghosh – nationalism is a manifestation of global power structures and the nation-state is simply a convenient unit of measurement for imperialists. The problem is not the existence of nation-states but rather the system of control behind them, for which they exist.

As I wrote the word “parishioner” above (Ghosh’s language, not mine) I realized with complete clarity that I had never written that word before. How odd that I’ve had a particular piece of language sitting in my brain, unused, for so long. I guess it says something about the limits of my engagement with the mechanisms of religious practice.