This is a good explanation of the inner dynamics of capitalism, that make it suck. [counterpunch]

It may be useful, for you, if you want to propagandize someone with socialist ideology. By the way, here’s a fun one: “as a libertarian you should be pro-socialism…” if you want to blow libertarians’ minds. The reasoning goes like this: being able to form sharing/union economies is a crucial expression of individual liberty. Libertarians ought to approve of workers’ right to unionize, etc. Sharing/union economies can be established without requiring the libertarian to participate in them, though admittedly it’s difficult to exclude libertarians specifically – but (as is often pointed out when dissecting libertarians) things like common roads, telephone service, etc., do not appear to work very well when established under a liberal model. In fact, highway standards and speed limits, etc, are implicitly authoritarian. Basically, libertarians will wind up either supporting authoritarianism (in which case they’re Randian objectivists who reify selfishness) or socialism (in which case they’re LINOs – libertarians in name only) If you really want to make heads explode, do a “Jordan Peterson Maneuver” (assert something insane and move past it, in a sort of philosophical Gish Gallop) and assert that there really are no libertarians, they’re just authoritarians who choose to serve others while deliberately remaining ignorant of their servitude. “You are your own enemy” is the argument. Say it dismissively. Force a libertarian to explain and defend their beliefs; hilarity ensues.

Anyhow, here’s Counterpunch‘s article on capitalism and why it sucks. [counterpunch]

The adversarial relationship between owners and workers is intrinsic to capitalism. It gave rise in the United States to the labor movement as farm workers took up factory jobs where they were treated like equipment, not human beings. There is a tunnel under the Blue Ridge Parkway near my home that was built by both slave labor and free labor. When two slaves died on the job, the tunnel’s builders had to compensate the slaves’ owner a substantial amount. So they switched to “Irish” laborers because they didn’t have to compensate anyone if they died on the job. Fourteen Irish workers died in a single year, without death benefits. Under capitalism, human expenses are a cost to be minimized.

Surely some corporations are in it for their employees, not their owners, and try to grow compensation for employees, not shrink it. No. There are some cooperatively owned enterprises that supposedly act in the interests of all employees, but these are no longer capitalist corporations, whatever structure they labor under. Corporations will certainly lie to employees and pledge their interest in improving the lives of their employees, but this is all done under the umbrella of cost/benefit accounting that not surprisingly results in employees receiving the least amount needed to insure their highest possible production.

That is a great explanation of the dilemma central to capitalism: if it’s not abuse, it’s not capitalism! Ta-da, I hereby dub thee “socialist.” Any socialized labor model concerns itself with fairness, and any capitalist model concerns itself with inequality. Back when I was first falling out of love with capitalism, I realized that “finding efficiencies” always meant squeezing labor, and that “profit” meant “how much you can squeeze out of labor.” Capitalists are, in fact, social leeches.

Every employee should always feel from “day one” (as Jeff Bezos calls it) that their employer cannot wait to eliminate them. Capitalism compels all businesses to reduce expenses to increase profits. Businesses are surrounded by a competitive landscape where their ability to manage expenses will determine their profitability. Owners and investors are always looking over the shoulders of managers, insisting costs be constrained and profits increased. Every employee in America has a bullseye on their back from the moment they are hired until they are fired or quit.

It’s a really good article and it contains a lot of explanation that you can use to dissect your capitalist friends’ pathetic arguments. By the way, unless your capitalist friends are 1%ers they’re not really qualified to talk about capitalism, anyway, because they’re demonstrably suckers that have chosen to align with an authoritarian system in hope that some day they will get to be a boss. That day will never come, of course – being a boss is usually something you earn the traditional way: you inherit it.

Related but unrelated, I wanted to explore the history of the UNC director who denied Nikole Hanna-Jones the tenure track position that she was originally offered. The guy’s name is Walter Hussman, and he got his name on the journalism program at UNC by donating $24mn a decade or so ago. Typically, such donations are donated on a regular basis, not a lump so, so the donator can realize tax benefits every time they send a check. In other words, Hussman got his name on the journalism program by promising to donate $24mn but if you think about it, if he had actually written a check for the full amount, he’d have had no leverage left. Cowardly journalists, kowtowing to their great white master, didn’t just describe him as “rich racist asshole” (which is correct) but instead they tried to downplay the significance of his petulant white supremacy: [ark]

The opposition to Hannah-Jones from conservative Republicans was fierce, particularly from Arkansas Democrat-Gazette owner/publisher Walter Hussman, whose name was given to the J-school following his promise of a $25 million gift. (How much he’s given so far has not been revealed.) 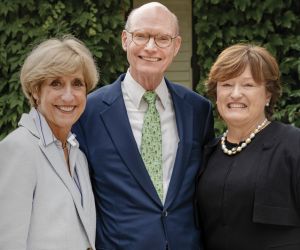 “Opposition” particularly from one person. It sort of makes it sound like there was more opposition than just the one guy who mattered because he had been waving a big check – and could threaten to never write it if UNC didn’t kiss his ass. The Arkansas Times goes along with the dance, which tells you something about them, too. A credible newspaper would feature in-depth profiles of Hussman. I tried to research him a bit, so I could take him apart for you, but I found, basically nothing. The guy’s a nobody. He inherited his newspaper and has been, like most newspaper owners, overseeing its demise. Other than that, I couldn’t find any sign of accomplishments that amounted to anything more than “he inherited it.” As usual, I find myself wondering “exactly why does he feel superior to anyone?” His signal accomplishments in life appear to have been crawling out of a wealthy uterus, and making his legacy into one of racist jackassery. Congratulations, jackass, you’re going to live to watch your legacy dissected piecemeal, like a confederate statue getting chopped up with an oxy/acetylene torch. There are already pretty reasonable questions being asked such as “why did the journalism program allow itself to be bought?” It’ll make a great case-study on “journalistic ethics” for the next generation of journalism students: “Notice how white supremacists use financial leverage to control the dialogue.” But what do you expect from a university that has several buildings that were constructed by slave labor? [diverse] Literally, UNC is a place that Black Americans ought to be running from not toward.

Printed on the second page of each of the 10 daily newspapers that Carolina alumnus Walter Hussman Jr. and his family own are the core values that his publications adhere to: objectivity, impartiality, integrity and truth-seeking.

Those values are being embraced enthusiastically at Carolina and will serve as a driving statement behind the newly named University of North Carolina at Chapel Hill’s Hussman School of Journalism and Media. With a $25 million gift to the school, the Hussman family is investing heavily in the future of journalism and the media professions and reinforcing those values for the next generation of media leaders being trained at Carolina.

At a time when public polls show trust in journalism slipping, the Hussmans are doubling down on their commitment to restoring that bond and trust between media and the public.

“I believe that by adopting these core values, the University of North Carolina at Chapel Hill’s journalism school can be the leader and serve as an example for other journalism schools in America to follow,” said Hussman, the chairman of WEHCO Media Inc., which owns newspapers, magazines and cable television systems in six states. “This is a key reason why we enthusiastically support the school and the University. This is a first, but important step, in renewing the public’s trust in our profession and the news media.”

What a legacy of shit.

The Counterpunch piece does not go into one of the other pernicious aspects of capitalism: collecting all that money has no purpose and therefore no meaning, unless it’s to manipulate the body politic, or create new generations of useless capitalists – like Walter Hussman. Capitalism allows someone like Hussman to control a media ’empire’ without actually having been a journalist. Capitalism allows someone like Hussman to have an effect on UNC’s School of Journalism (now known as “UNC Media Hack-work Holler For a Dollar Center”) It’s a dynamic I have tried to capture elsewhere in my argument that “power and wealth have no intrinsic value and are only valuable when you abuse them.” Hussman has inadvertently turned his life into a case-study of how inherited wealth makes people lazy and stupid.

The Hussmans are doubling down on their commitment to restoring that bond and trust between media and the public. How are we doing, so far? – The Hussmans