When I was in college I was puttering along I-95 on my little motorcycle; it was a lovely spring day.

Suddenly, the truck ahead of me had a sheet of plywood peel off the back. More plywood slid off the side of the truck and onto the shoulder of the highway. The sheet that had peeled off flipped up in the air, and over – I ducked and it went over my head. All of this happened cooly and instinctively and I shifted to the left and got away from that truck. It wasn’t until I was a few miles down the road that shock set in and I had to pull over, park the bike, and lie on the grass with my helmet off, whooping for air.

Road hazards kill people every year. Another sobering incident was the time I was driving by a public park in Maryland in black powder hunting season and something hard hit my windshield and bounced off, leaving a small crack. Just another reason to despise hunters – one of the bastards tried to kill me. It was probably an accidental juxtaposition between my car and the bullet, but it was still a shot fired deliberately by someone.

For its usual mysterious reasons, youtube fed me several links to various views of this incident:

The big semis carry really stupendous loads – 25,000 – 60,000lbs. In this case, a load of steel balls – 40,000lbs of them – dumped onto a sloping street in Seattle. They began doing what balls would do, namely: rolling down the street.

In fact I have a lovely 3″ chrome/alloy (“stainless steel”) ball bearing sitting right by my desk and it weighs about 10lb. Getting hit with that is better than getting hit with a shot from a 10lb napoleonic cannon but, basically, that truck was dumping cannon balls. 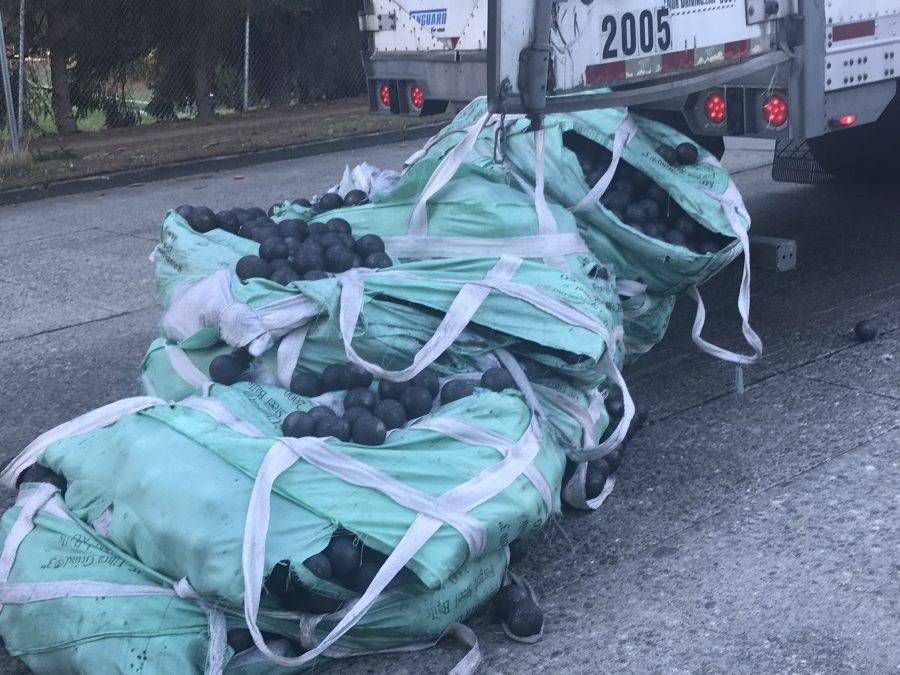 It looks like the back door of the truck came unlatched and the bag holding the balls fell out, dragged a few more, and abraded until balls began leaking out like some kind of odd seed-dispenser. A semi-trailer is so powerful that it wouldn’t notice the dragging unless the driver happened to look out the back.

Clean-up took 6 hours. That trucker had a bad day at work. [seattle]