This is one that, I admit, never occurred to me, either. The fact that it did not is profoundly embarrassing. Ready for a little F-35 bashing?

In Popular Mechanics [pm] there is some discussion with an F-35 pilot, regarding the cockpit. And, since I was just neeping about strategic system design and component layering [stderr] it’s strangely relevant. Did you know that the F-35 has a “software-defined cockpit”? I didn’t. In principle, that seems like a pretty neat idea: you can drop bombs with it and you can play rogue. What might go wrong?

In an interview with the excellent aviation magazine Hush-Kit, an anonymous Panther pilot describes the F-35’s cockpit and interface system. The pilot says the cockpit itself is “beautiful,” full of screens that allow you to bring up an incredible amount of information about the fighter with just a few finger swipes, and customize the data to tailor it for the particular mission.

The customization was, at first, the part that worried me. I was thinking “oh god it’s just another thing for pilots to mess with.” Distractions in the cockpit of a very expensive combat jet (even if it’s relatively short-range and slow-moving) have to be a problem. But, no:

But the problem with touchscreens, the pilot explains, is a lack of tactile feedback. Switches have a nice, satisfying click that instantaneously lets the user know they were successfully flipped. Almost everyone with a smartphone has touched a virtual button on a touchscreen, expected a result … and then nothing happens. The anonymous pilot reports failing to get a result from a touchscreen about 20 percent of the time:

At present I am pressing the wrong part of the screen about 20 [percent] of the time in flight due to either mis-identification, or more commonly by my finger getting jostled around in turbulence or under G. One of the biggest drawbacks is that you can’t brace your hand against anything whilst typing – think how much easier it is to type on a smartphone with your thumbs versus trying to stab at a virtual keyboard on a large tablet with just your index finger.

That’s another problem with a software-defined control plane: it will not degrade gracefully due to load or damage. It sounds like, if the cockpit of an F-35 takes damage, it’ll just turn into a pretty array of black glass. Not to worry, the plane’s not survivable enough that it’ll matter for long: the damn thing only has one engine. But, when you combine the fact that the F-35’s ground link software uses vulnerable and unreliable WiFi protocols and contractor-built software, with the idea that a hostile power might want to incapacitate an aircraft, a “remote reboot” means that the plane is a flying brick. A briefly flying brick.

I wonder how well it all responds to system load. What happens if something is eating up more than its share of CPU power and the entire display panel system starts to get jumpy and laggy? You can’t reboot. Speaking of reboots, I sure hope they turned Microsoft patch updates off in flight mode; “System needs to reboot to install patch, in 15…” as you’re coming in hot on a warzone.

The bumpiness factor is a serious issue. I remember one time I tried to write a blog posting while I was on a bus. Couldn’t do it. It was better on a big commercial jet at high altitude, but I was holding my laptop practically on my chest because of the reclining seat in front of me. But that’s another story. 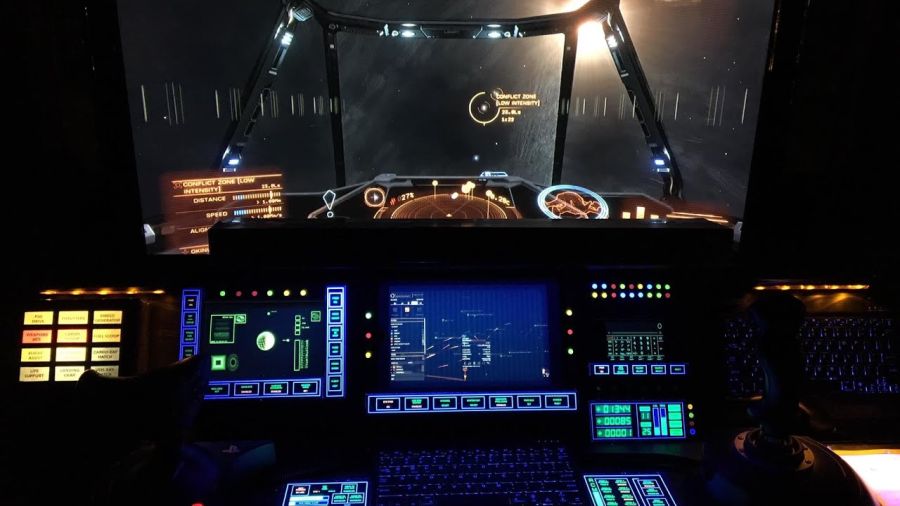 I swear I am not going to make any derisive comments about the 1980s graphics on that multi-zillion-dollar display, except to say that my friends in the Fuel Rats, who have made their own cockpits for Elite: Dangerous using iPads and button-blocks, would look down their snouts at the F-35’s displays. The state of the art in Elite is to use programmable USB button blocks with tactile buttons. The fellow whose cockpit is pictured above is using the Saitek controllers and a laptop and a couple of iPads and some button blocks. I used to do everything with an old Thrustmaster “Warthog” HOTAS – I think it has a total of 20 buttons and switches and that’s enough. Not enough for an F-35, though. Meanwhile, the Air Force fighter jocks will cry as they deal with the F-35’s “fly by fumble” interface.

Hahahahaha I hope the “Eject” control is a good old-fashioned pull-lever.