I am a total sucker for “fortress of solitude” type buildings. There is some part of me that wishes I could just teleport myself to Mars, like Dr Jupiter, and build a place where I could do my thing and the rest of the world could leave me alone.

That doesn’t happen, though. Humans need other humans – in fact, I’d argue that a human, isolated from other humans, is not fully human (because, to be fully human, we depend on eachother for things more than companionship). The fantasy is lots of fun, but you’ve got to wonder things like:

There are other aspects of the fantasy fortress aesthetic that don’t quite line up for me: my real existence is a great big pile of clutter and partially-finished projects. A great, echoing, empty, ultra-stark fortress is exactly the opposite of how I live. In other words, I suspect that, if I lived in Isengard, I’d be kicking the orcs out of the bottom couple floors and building a machine-shop. While I like the idea of living in minimalist balance, I have to face the fact that I am not a minimalist. That’s a tough thing to face up to, too – it’s like when I was in high school and wanted to be a goth but I’m just too big, blonde, and happy to pull it off.

Anyhow, I’ve seen a few of these mountain retreats. One (I have lost the link) is a great black slab jutting out of a granite cliff, somewhere. And then there’s the hotel in Norway where Ex Machina was shot [businessinsider] which I would like to visit, someday, if the world’s shit ever gets back together. These buildings are intellectual descendants of Frank Lloyd Wright’s Falling Water, in my opinion: their aesthetics derive and depend from integrating wild spaces into view-spaces and private nooks. And, like Falling Water they are ludicrously expensive.

Here’s the fortress I am currently in love with. Obviously “there’s plenty of room at the bottom” and it’d be easy enough to add a sound-isolated machine-shop at the bottom of the stack. [casa brutale] The obvious argument against the place is that “nobody should spend that much money on where they live” – an argument I cheerfully grant because we’re talking fantasy, not reality. 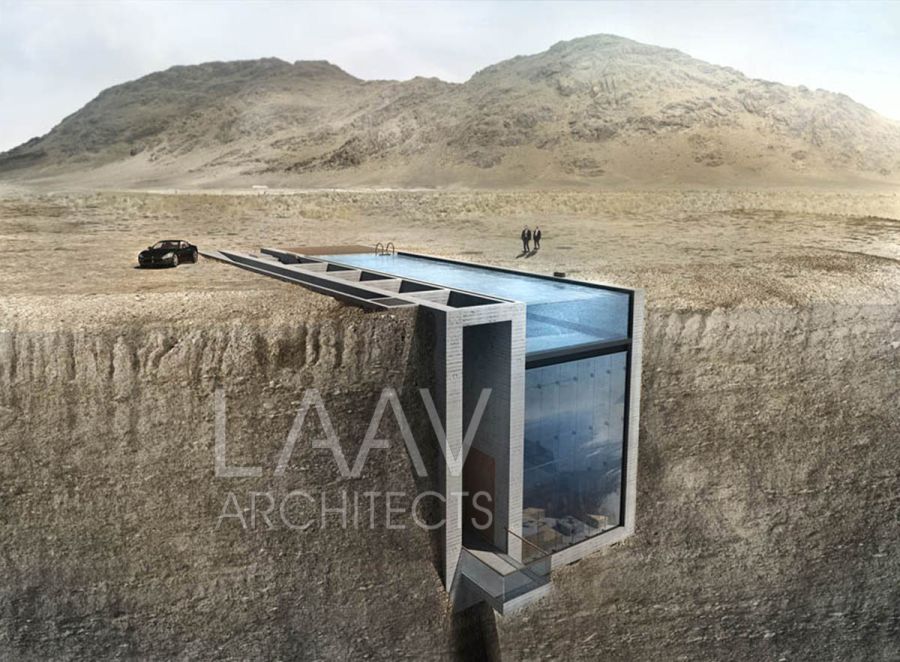 Swimming pool is cool but realistically, I’d probably only get wet a couple times a year. I don’t like the sensation of drowning and I’m a shitty swimmer. My life-long approach to dealing with that conundrum is to stay away from water, especially deep water, and boats (which seem to like to flip over when I am on them) But I immediately saw the pool, with the clear bottom, as a way of projecting light down into the building. These are architects’ renderings: 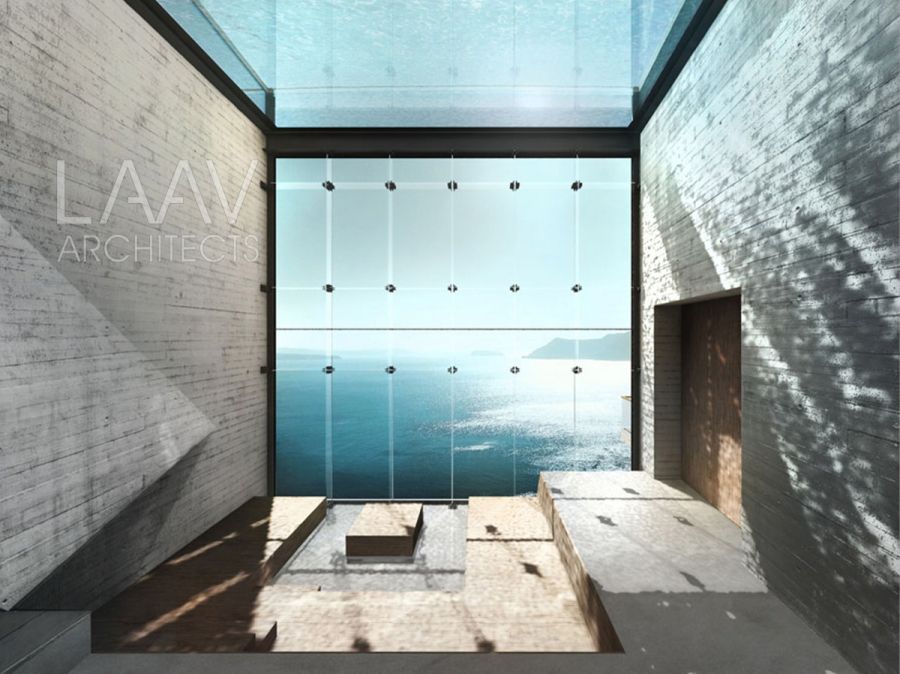 Even a small earthquake would be a big problem for that structure. 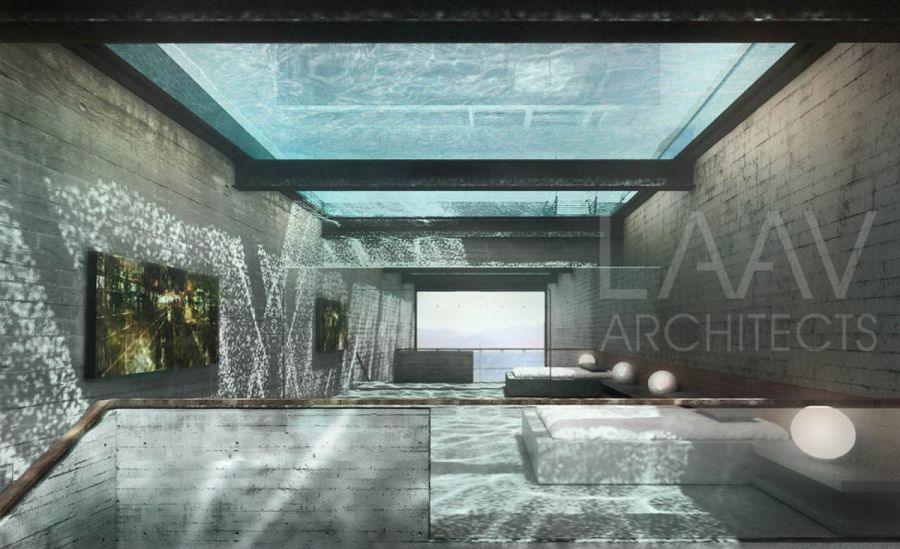 I also suspect that would be a bad place to be sloppy drunk in; if you’re susceptible to motion sickness, the endless light-ripples on everything would be a bit much.

See what I mean about it being a bit minimalist? There would need to be some really big walk-in closets and a “mess floor” or two because there’s no way I could discipline myself to put things away like that.

Of course, the uber-rich don’t put things away: they have staff who know where all their things go, and put them away for them. That’s part of the point of this sort of radical minimalism; it says “I have time.”

I’m also super-fond of “tiny houses” except, again, for the problem of clutter. The only way a tiny house makes sense is if you’ve got a fortress in a hollowed-out volcano, nearby.

Feel free to post links to your favorite fortresses!

View from the hotel in Ex Machina: 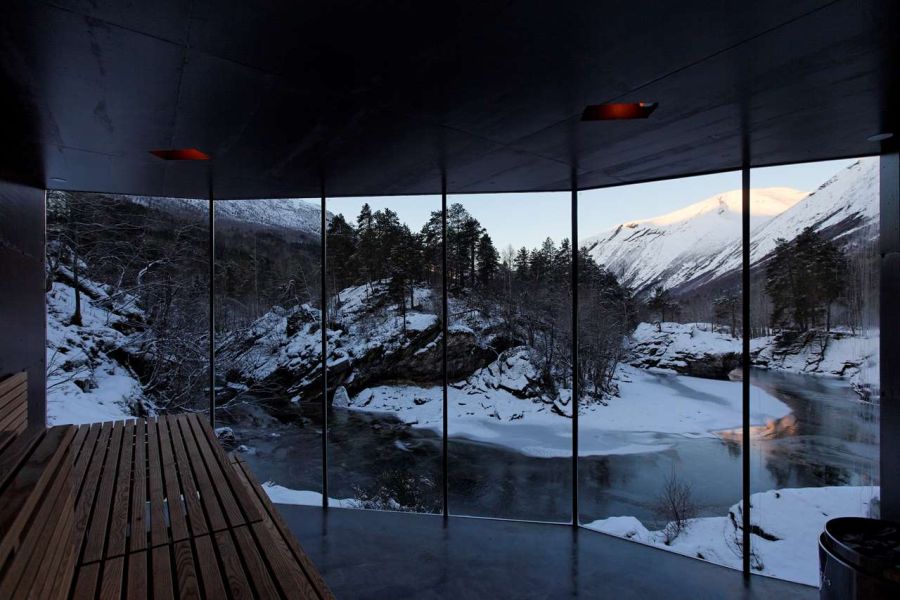