I made a posting the other day, about Rudi Giuliani and what a racist bastard he is. [stderr]

And, unfortunately, my posting was nearly timed with his target, David Dinkins’, death. 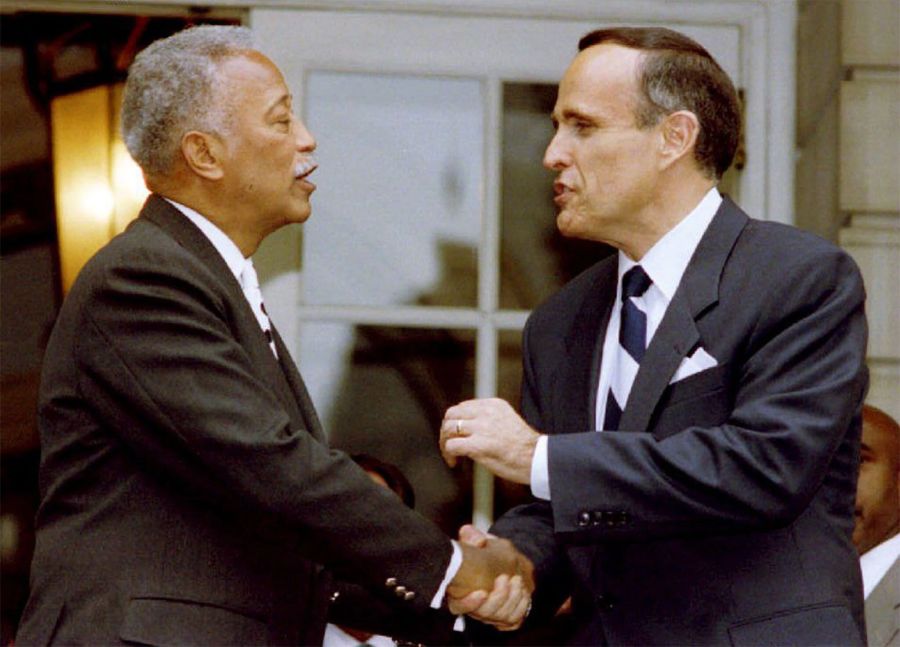 Insincere smiles all around. Note Giuliani’s dominance-move in the handshake. I wish Dinkins had punched him in the kisser.

Dinkins was another politician, so I probably would have hated and distrusted him pro forma, but Guiliani was and still is a wretched example of humanity who goes out of his way every day to show that he deserves hatred and distrust. When Giuliani finally blows a gasket, I am not looking forward to the fawning coverage of that crook-turned-clown’s career. On the brighter side, he appears to be trying to make sure that he’s riding off into a surreal dumpster fire instead of the sunset. It’s as if he doesn’t care anymore, and maybe he shouldn’t.

What a horrible piece of shit Giuliani is: 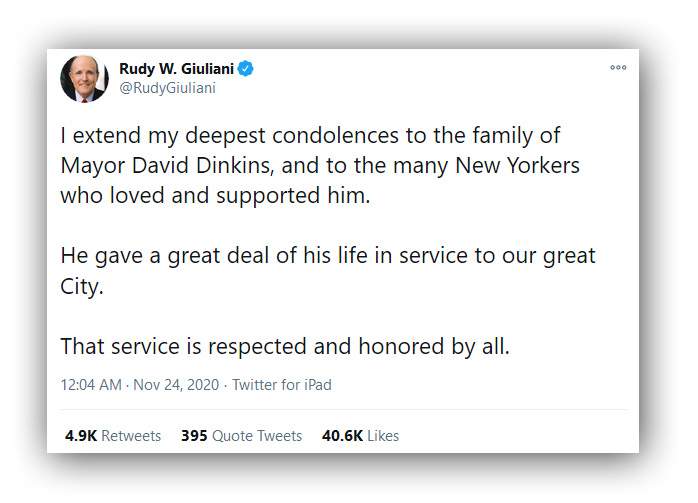 The wording of Giuliani’s tweet can be parsed with the precision of Bill Clinton giving testimony: “… and to the many New Yorkers who loved and supported him.” certainly does not include Rudi Giuliani. [nyt]

Mr. Dinkins was a cautious, deliberate Harlem Democrat who climbed to City Hall through relatively minor elective and appointive offices. He liked to call New Yorkers a “gorgeous mosaic,” and he saw himself as a conciliator who might subdue the passions of multicultural neighborhoods with patience and dignity.

I am not sure I like the way The New York Times frames Dinkins’ career but I guess they’re the newspaper of record for New York City:

His Safe Streets, Safe City program, which built up the police force and is credited with being the foundation for New York’s success in driving down crime, also included resources for youth enrichment, Mr. Steisel recalled.

I think that, reading between the lines, we might say that Dinkins’ Safe City Program was a last-gasp before the boot came down in the form of the “broken windows” policing policy that built NYPD into the greatest force of repressive chuds in the country, a 36,000-strong force that took “broken windows” as a justification for more extreme policing, then followed it with racialized “stop and frisk” (although one must note that “broken windows” policing inherently means that the police are mostly going to do their work in poor neighborhoods, where there are broken windows).

“He took a quiet pride in the small kindnesses,” Mr. Gaspard wrote on Tuesday. “He accomplished much with humility and more strength than the world knew. Rest in our hearts.” 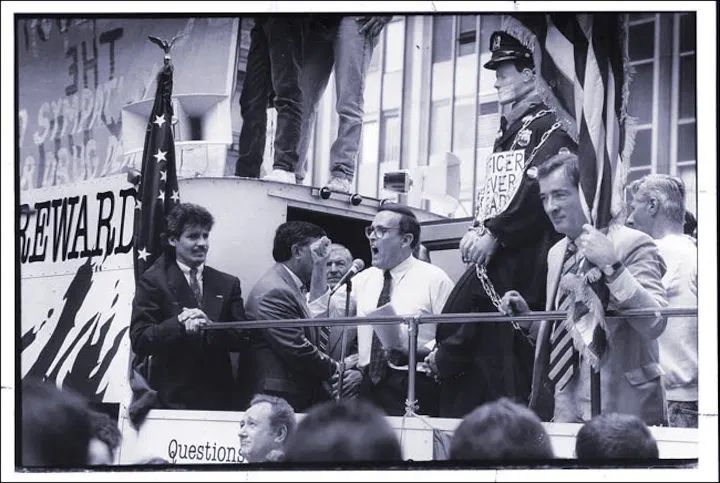 He had to deal with a lot of shit. I cannot imagine what it must have felt like, to be elected mayor of New York City only to have the police (and a certain District Attorney) rise up in a racist protest. Welcome to the great American democracy bait and switch; though I doubt that any Black man had any illusions of what he was getting himself into, especially after making his way up the rungs of power.