After a bunch of searching around, I found a bog oak broker (I don’t know what else to call them) who ships in logs from Ukraine and saws them up into boards in a mill in New Jersey.

What’s particularly great is I can email and say “I’m looking for a chunk about so x so x so high” and they’ll set one aside if they have one. Perfect. Of course, being a packrat like I am, that is dangerous: I want all the bog oak.

Turning a piece like this is tricky. For one thing, you have to worry about catching a chisel in the gap and ripping the whole thing apart. When I work on a piece like this, I take advantage of the ridiculously long chisels I made, which allow me to stand off to the side so I am out of the line of fire. For the other thing, sanding something with a gap is problematic. It beats the shit out of your hand and there’s the very slight chance that you might catch a finger in the gap and lose the finger. To sand a piece like this, I approach the cut carefully with my carbide scraper and get it as clean as possible, then sand it with sandpaper wrapped around a spongy sandpaper block. If anything snags, the usual failure mode is that the sandpaper block gets launched. And the sandpaper block absorbs some of the vibration and shock. 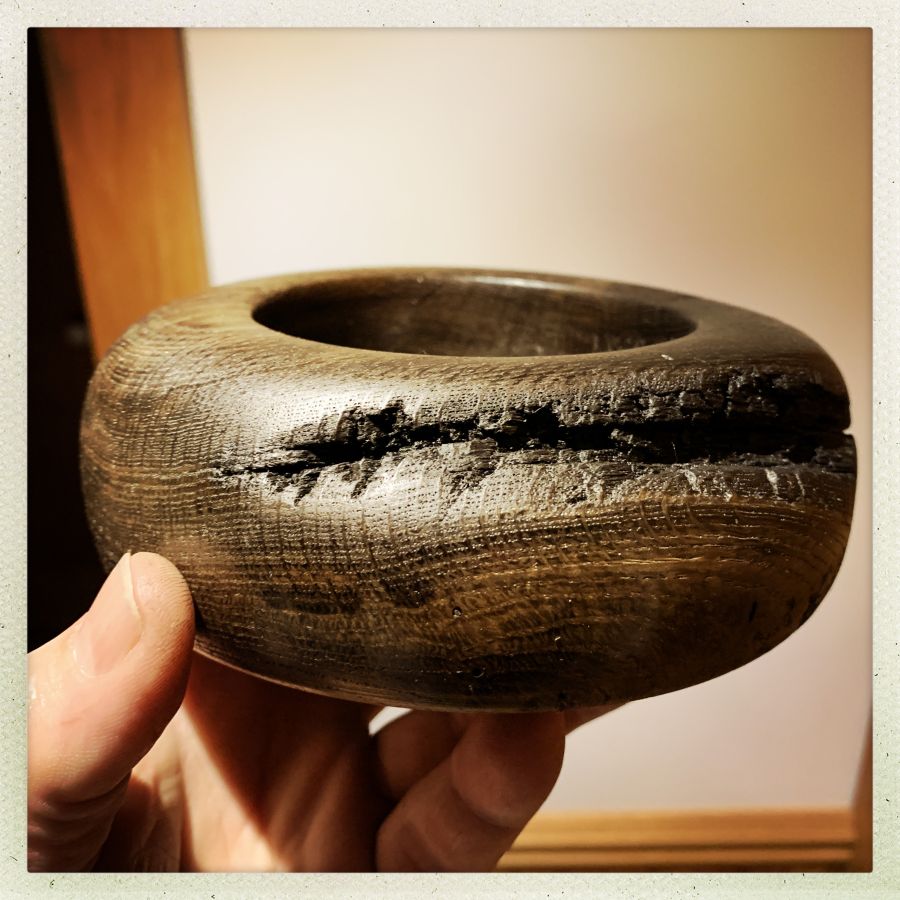 The interior hollow is smaller than usual, but that’s because the crack actually goes right down into it. If I had snagged the inside of the crack with a chisel, the whole thing would come apart. I could have resolved this problem by soaking the whole piece in resin, then turned it much thinner, except I feel it’s somehow improper to soak such an ancient piece of wood in plastic.

That’s 5,000 year-old bog oak. Babylon was a big thing when that tree grew. Bronze was the hot military technology of the day; steel hadn’t been figured out, yet.

I turn this thing around in my hands as I wax it, and the grain sucks me in, hypnotizing me.

I may be quiet for a few days. The elephant in the room is the election and whenever I think about it, I want to start punching people.

Today is my 59th birthday. I remember when I was a kid, people would say “you can do that when you get older!” Well, I’m older, now. I think that the way the world should work is that, as we age, we “level up” and unlock new powers, better spells, and improved stats. Instead, the stats move around (wisdom +1, dex -2, str -2, char -1, etc) In World of Warcraft you can unlock flying mounts at Level 100. This does not seem to be arranged right.

When I was a kid, I read P.V. Glob’s book The Bog People. It fascinated me because it was the first view I had had of photos of decomposed bodies. It was also a good view into the mysteries of archaeology: nobody will probably ever figure out why people were formally strangled and buried in a bog – was it religion, politics, a serial killer? Nobody will ever know (probably). My copy of the book was on the bookshelf at my parents’ house in France, and it appeared in a mail envelope a few weeks ago. My dad must have thought I’d want it. And, as usual, he was right.