I can’t afford to be less than fully in the moment, though, since I could lose a limb or some fingers pretty easily if I’m not paying attention. Today, I may take it easy because I didn’t sleep very well last night and I have a splitting headache. It’s not a stress headache, it’s an “I want to choke the life out of half of the Americans headache.” Hey, Abyss, stop staring back into me!

Before I shut down last night, I spent some time making handles. Because it’s easy and it’s a gratifying way to create something beautiful. By the way, making handles really is easy; if any of you have an application for which you need a nice simple handle, let me know and I can probably shred one out. My carbide claw has turned out to be such a useful tool that I do 90% of my lathe-work with it, and it dramatically reduces work-time for most projects.

These are cocobolo and rosewood, turned from scraps left over from making the lathe chisels: 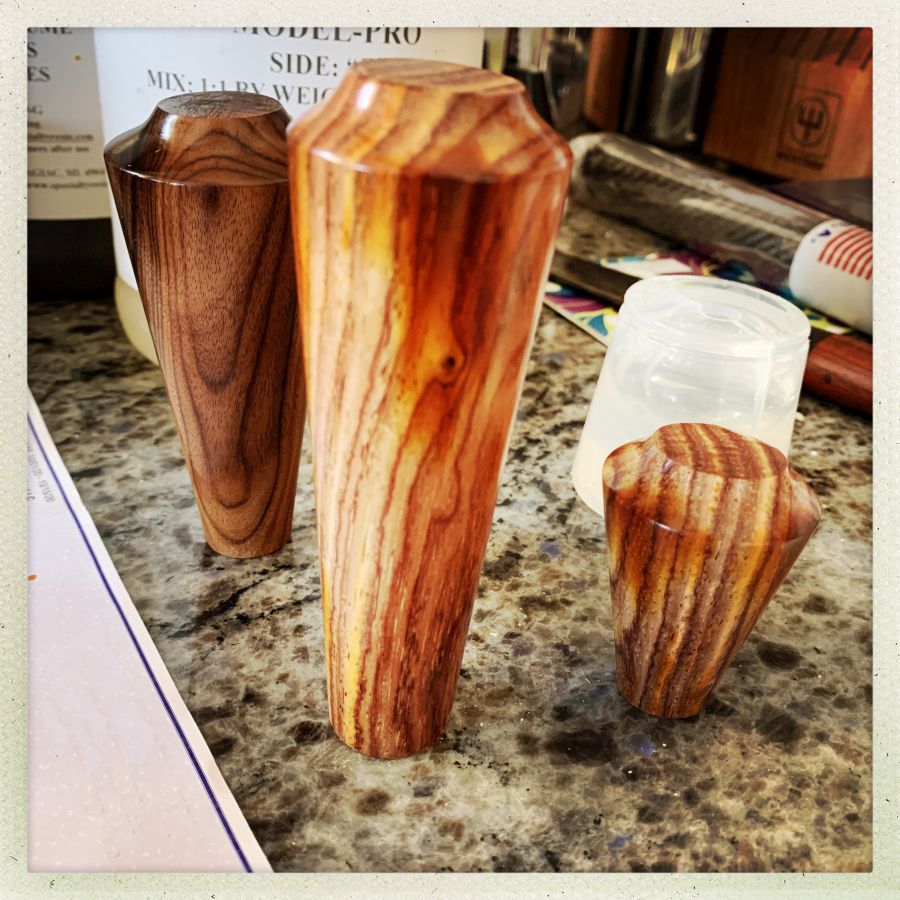 Cocobolo is such weird stuff. When you first cut it it is light-colored with an intense grain, but it ages and turns brown/orange. You can see where it’s turning already. The other handle in the back is rosewood. Cocobolo and rosewood are related and both are resinous and very hard wood. Items made from cocobolo have a pretty high resonant frequency – the wood doesn’t “thump” it “clicks” and sounds almost like metal. It also produces a nasty dust that causes bright orange snot if it gets past your breath protection.

Let me talk a bit about my “method” when it comes to doing a custom piece. It’s – interesting – because it’s kind of free-associating and guiding a mutual problem-solving session. Most of the people I am talking to about custom work don’t have a very set idea of what they want, except that they want something cool and unique and beautiful and solid and sharp and well-made. So I start off with:

What were you thinking of?

And then it goes to: something like “I don’t care for some kind of radical pattern or crazy over the top welding, but subtle and elegant would be good. And I like the silver castings you do. But not a gummi bear. What else?”

For example, I did the auction for “pimp wok” and the winner thought some kind of cool cast finial would look great. And I agreed! But a cast finial of what? Well, I sent a list:

I don’t expect anyone to jump at a particular idea, it’s just a way of describing the range of possibilities. It’s hard for me, too, because: 1) I cannot fail, 2) It has to be practical, 3) It needs to be cool, 4) It has to be something that won’t take forever for me to do. For example, I have to steer away from designs that would require me to make a large damascus billet then hollow it on a metal lathe and surface it, thereby spending a day at the lathe to turn 95% of the billet into chips. And my metal lathe skills are questionable at this time. So, there’s back-and-forth and I have to admit that’s a tremendous amount of fun for me.

Based on the list I sent above, the winner of the pimp wok said that a chicken’s claw would be pretty cool because the wok was going to process a great deal of chicken. Aha! So I immediately visualized a chicken’s claw holding a ball (like the eagle claw/20-sided die cane-topper I want to do). Everyone liked that idea. So, here goes nothing.

Did you know that people sell dried chicken’s feet as dog chews, on amazon.com, for $3 a bag? 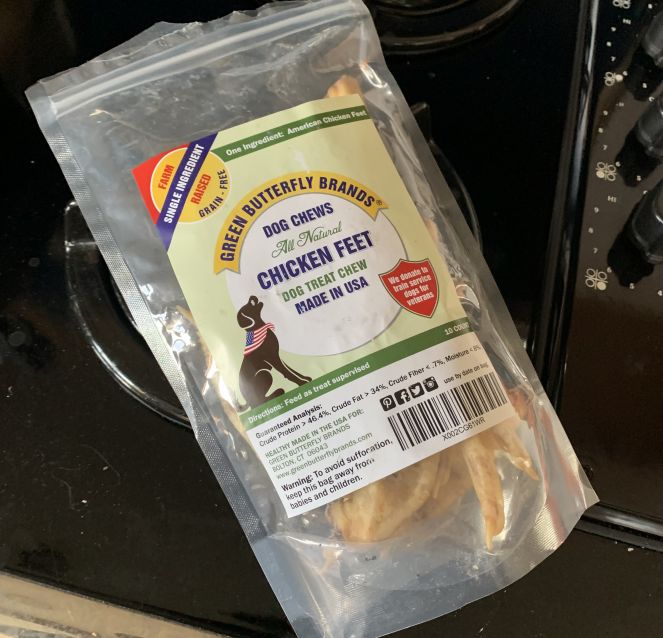 I found those after I had spent a while on etsy looking at various resin castings of bird feet, and I found a really cool “voodoo gris-gris” someone had made by painting and wrapping and decorating a dog chew until it was a thing of intimidating, beaded, tribal beauty. That’s some entrepreneurship, right there: turn a $.25 dog chew into a $30 highly marketable witching device! Anyhow, I treated discovering that as a validation of my scheme.

The next step was putting one of the feet in a cup of water with some vinegar for a couple days to soften it. It made it smell a bit, too. But after 3 days it became pliable and I dug up a resin mold that I have for a ball that happened to be the right size, and cast a polyurethane ball. I chose that option because polyurethane resin is great for gluing things to, with more polyurethane resin. 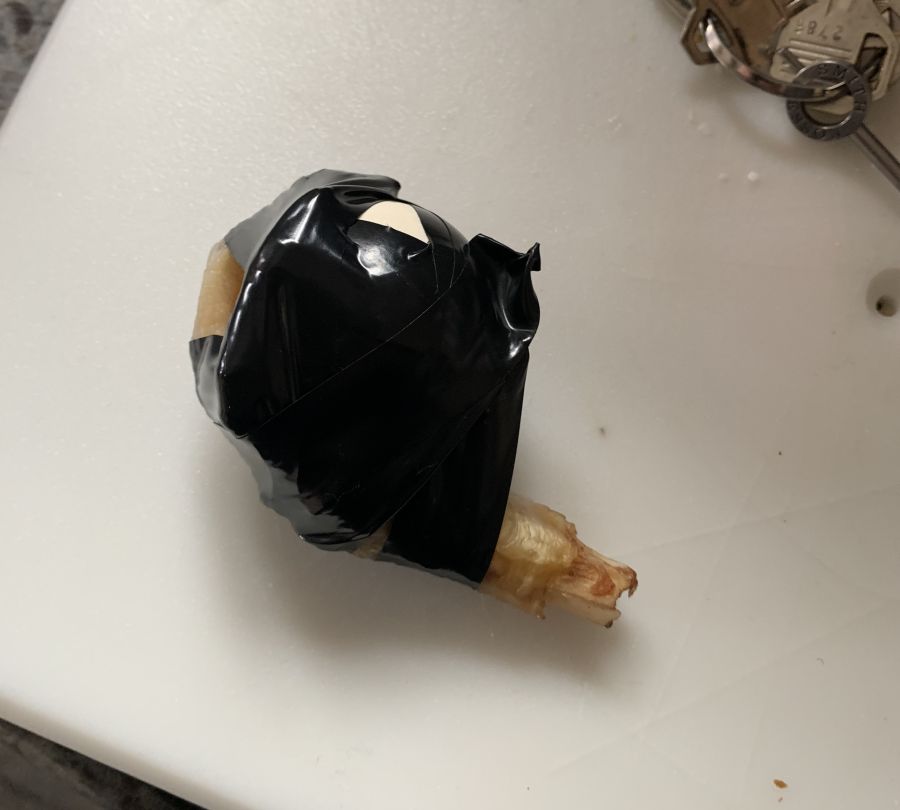 I’m afraid I did some violence to some of the bones in the foot, but I managed to get everything arranged and wrapped in electrical tape to hold it in place. Then, I let it dry a couple days (symmetrical: 3 day soak, 3 day dry) and carefully unwrapped it, then packed PC-11 epoxy into the voids under the claws to keep the silicone from mechanically locking under them when I make the mold.

This morning, as I groaned and tugged my hair over the news, I used a sharp kiridashi to pare back the excess epoxy and added a bit more West System G-flex in a few spots to make sure it’s good and solid. I also picked a few spots that looked like they needed to be “softened” in terms of detail and brushed a bit of PC-11 into them to reduce their “toothiness” for the silicone mold. 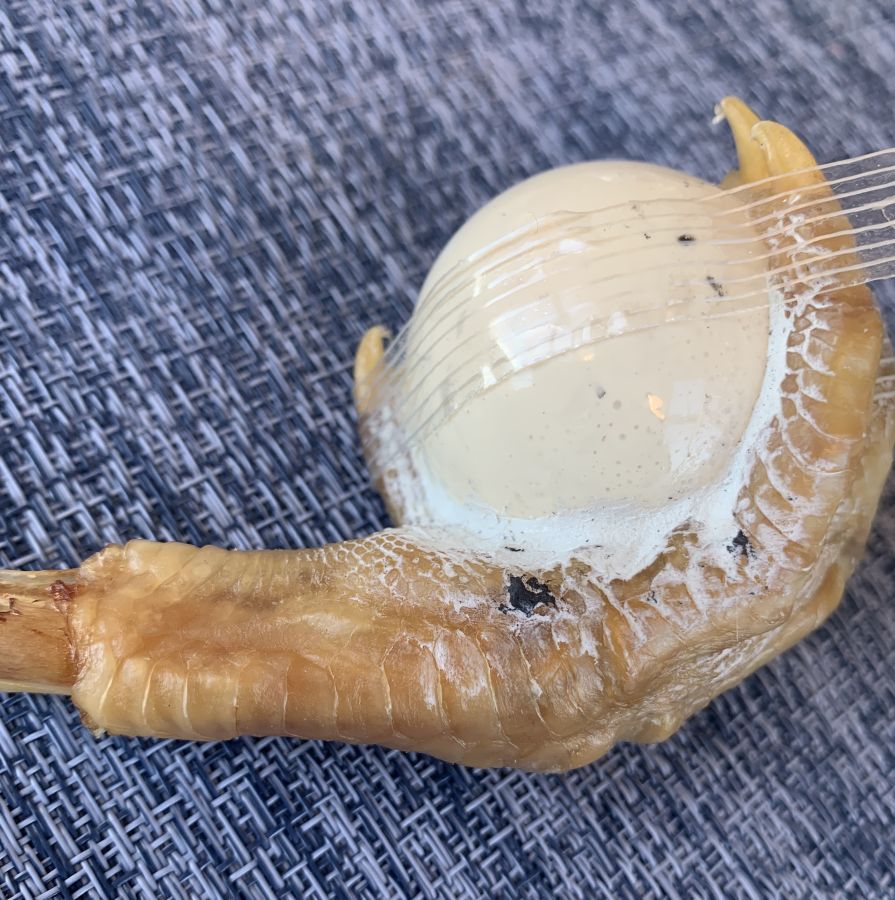 Our brains are very attuned to color, rather than texture, so it looks like it’s all wrong: there are white spots and brown spots and this and that, but remember that once it comes out of the silicone, none of that matters.

I’ve got a bit of strapping tape on it to hold it until the G-flex cures and later today I’m going to take it over to Mr Happy Dancing Bandsaw and cut the end of the ankle clean. [Wait, no, maybe I’ll chop it with my sheet metal shear] That’s going to be where the metal will get poured. I’m going to need an air release tunnel on the top claw and probably the bottom ones as well, but that’ll be done when I have a wax casting from the silicone mold.

That’s the state of play. So far, it looks … odd. I’m trying to see what will be, not what is. It feels funny to put so much work into something that I will use once and throw away (once I have a good silicone mold I can make plenty of feet in resin). It’s got to be solid enough to survive that step but only just.

I know a guy who made an elaborate sculpey model to hold a microphone for a rock band. It looked pretty amazing (sort of like a Rolls Royce hood topper from a Grey Ghost) but when he made it he didn’t think about mechanical locking in the mold, so when the time came to demold the thing, his master object disintegrated. Unfortunately, the mold also had some bubbles in unfortunate spots. There were some manly tears. Then, we cast a polyurethane resin version in the flawed mold, and he got busy with sculptable epoxy and repaired it to where he wanted it, and did another mold. This process can be maddening but once you’ve got a mold nailed down, you can just turn the crank and make a flood of objects.

Bogged Down » « Money Does Not Buy Happiness