The term “revisionist history” is one I don’t like. Yes, there are revisionist histories that try to – for example – argue that the holocaust didn’t happen, but those are just outright misrepresentation, rather than actually revising how we see some historical event or period. Revision may entail completely re-assessing something we thought we understood, based on new facts. 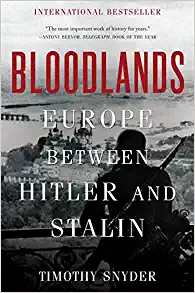 The great example of this, for me, is Howard Zinn’s [recommended book!] A People’s History of The United States. I do not believe Zinn lies or misrepresents anything in his history, but he presents a challengingly different view of events by writing about them from the perspective of the defeated instead of the winner. As Zinn says “history is as much about what you choose to leave out, as what you leave in.”

If the main pillar of the system is living a lie, then it is not surprising that the fundamental threat to it is living in truth.
– Vaclav Havel

Then, there’s the other form of revision, when the context and interpretation of some event is changed profoundly. Growing up in the US, I learned about the unprovoked Japanese attack on Pearl Harbor that pulled the US into WWII – it wasn’t until years later that I learned that US policy toward Japan prior to the attack was an economic and technological embargo, with a strongly racialized element, intended to keep Japan from rising as a technological/military power in deference to whiter European allies. When an understanding like that finally reaches me, I feel as if the world around me has spun, briefly, and resumed its movement in a different direction. Revision, indeed.

I recently listened through the audiobook of Timothy Snyder’s Bloodlands: Europe between Hitler and Stalin. [amazon] It’s painful and horrifying. You may be familiar with Stalin’s quip, “if one death is a tragedy, a million deaths are a statistic.” The book is full of statistics of Stalin’s sort. In fact, it’s full of many statistics specifically about Stalin’s choices and their consequences. There were times when I wanted to fast-forward because it started to numb my brain: so many died of starvation in this month, so many in that month, so many in this district, and so many stood on the edge of a killing-pit firing bullets into the necks of teenagers or old people. I suppose if you encounter holocaust denial, this book would be a great source of information to refute it, but Synder takes us down a different path, entirely, by re-framing the holocaust in the context of genocidal Europe from the 1930s until the cold war. Let me say this: there is something horribly fucking wrong with European racists – we ought to be, globally, asking ourselves, “how do we keep these people out of power?” To excuse it, I suppose we’d have to say, “Ghengis Khan was worse” except Ghengis Khan was not as stupid and ineffective as Stalin and Hitler.

Let me back up a bit: what you generally learn in the US is that WWII happened and the Germans went batshit and started industrial-scale murdering Jews. After that, Jews migrated to Palestine and founded Israel. The US and USSR divided Germany and stood glaring at eachother across an iron curtain, or something, and eventually the USSR fell apart because of its inability to sustain a command economy with massive military expenditures; capitalism won. That’s all bullshit, of course. Snyder’s explanation is much more realistic: Stalin began slaughtering Soviet Ukraine as part of a program of resettlement and reallocation, which broadened out to include the entire USSR. Then, he allied with Hitler, who had the same idea regarding Poland and (though Stalin didn’t know it) Russia. Both leaders were practicing a form of settler colonialism: wipe out the domestic population of an area and bring in their own people. “Lebensraum” on one hand, and shifting from an agricultural society to an industrial/agricultural society on the other. Snyder bursts a lot of the myths I learned about the holocaust, that the einsatzgruppen and SS were the profligate murderers of Jews, and musters facts that show that shooting-pits took more lives than the mechanized death-camps, and that it was ordinary policemen and militias that did much more killing (in USSR as well as the Reich). The history Snyder portrays is that Hitler and Stalin both had, basically, the same idea and methods, but couldn’t maintain their agreement because, ultimately, Hitler was greedy. Snyder also goes into agonizing detail about the cost of un-screwing settler colonialism: millions of German colonists displaced from homes that they had taken and occupied in Poland and elsewhere – layers of slaughter and counter-slaughter. The chilling reality is that, for most people trapped in the middle of the nightmare, it didn’t matter which side you were on because both sides wanted to kill you if you were not 100% subservient to them, which was a problem because they traded you back and forth as territory. Stalin wanted to murder anyone who had been successfully invaded by the Germans because you can’t trust someone who’d allow something like that, can you?

It’s a much more accurate view, I think, of events but it no longer allows anyone to be seen as the “good guys” – the key part of the narrative from which Americans hang their insistence that WWII was the “good war” and those that participated in it were the “greatest generation.” Ugh, it sounds more like the 30 years’ war or the Boxer Rebellion: waves of semi-organized military crashing around all over the place, killing anyone they encountered.

Synder does not trade in horrible statistics, he personalizes the nightmare with accounts from those who were caught up in it. Pertinent to the audiobook: the narrator’s voice is even and unemotional, which makes the litany of horror somehow even worse because it’s so dispassionate. It’s entirely appropriate for the subject. Also, the narration has some obvious audio flaws – at several points they appear to have gone back and spliced in the correct pronounciation of some town-or-other, because the audio headspace discernably changes when the town’s name is said. It’s distracting.

“They asked for my wedding ring, which I…” The Polish officer broke off his diary, just before he was executed by the Soviet secret police in 1940. He was one of about 200,000 Polish citizens shot by the Soviets or the Germans at the beginning of the Second World War, while Nazi Germany and the Soviet Union jointly occupied his country.

Because of the “realpolitik” of fighting the war, the US had to promote Stalin as the “good guy” to counter-balance Hitler, but Synder makes it clear that’s a shameful lie. There were no good guys at all. Or, rather, if there were, they were mostly shot and buried in the killing pits.

It’s a view of WWII that sounds more like the worst parts of the Vietnam War, where the civilian population was either burned out of their villages by US “search and destroy” missions, or terrorized into helping the Viet Cong, as nobody was allowed to enjoy or claim neutrality. The Soviets would shoot you if you even questioned it, and so would the Germans. The whole book is a litany of slaughters and starvation. Snyder also confronts head-on how both the Soviets and later the Germans used starvation as a basic form of genocide; the Soviets deliberately starving 4 million Ukrainians to death until the Germans arrived – and resumed starving them. Both Stalin and Hitler wanted the land, but not the people.

The following summer a 12 year-old Jewish girl in Belarus wrote a last letter to her father: “I am saying goodbye to you before I die. I am so afraid of this death because they throw small children into the mass graves, alive.”

She was among the more than 5 million Jews gassed or shot by the Germans. In the middle of Europe, in the middle of the 20th century, the Nazi and Soviet regimes murdered some 14 million people. The place where all the victims died – the bloodlands – extends from central Poland to Western Russia, through Ukraine, Belarus, and the Baltic States. During the consolidation of National Socialism and Stalinism, 1933-1938, the joint Soviet/German occupation of Poland 1939-1941, and then the German/Soviet war 1941-1945, mass violence of a sort never before seen in history was visited upon this region.

It was necessary for the US’ post-war aims to downplay the involvement of “the average German” in the carnage, as well as to downplay the Stalinist purges and genocide by starvation. So American kids grew up hearing about the industrial death-camps and the einsatzgruppen, instead of being told that the majority of the murders were committed by regional police in occupied areas. It is impossible to believe that colonists, moving from Germany to re-settle in Poland, in fully-furnished homes that had been cleared of their former occupants, did not know what was going on. In fact, it is impossible to believe those colonists were surprised when the Soviet police drove them from their homes and shot them, after Germany had fallen. Snyder runs us through the whole bitter play from when the curtain came up till it finally dropped (sort of) instead of just presenting the more sanitary “greatest hits.” Earlier when I mentioned Ghengis Khan: it feels as though Central Europe was trapped between two versions of Ghengis Khan, equally blood-drunk and ruthless, who traded it back and forth as a play-thing while the rest of the world watched. We should not have so eagerly propagandized our monster as a “good guy” compared to the “bad guy” Hitler.

This is an important book, and I’ve added it to my recommended reading list. It’s not fun reading.

Not a single one of the 14 million murdered was a soldier on active duty.

This book fits well with Larry Collins and Dominique Lapierre’s “O! Jerusalem!” which presents a wide-angle view of the establishment of Israel. Most Americans were raised with the notion, by implication, that Israel was established because of the actions of the Reich, when, in fact, ethno-state zionism was thoroughly spun up and active in the 1930s – the time where Bloodlands begins to explain what was happening to European Jewry. It has always seemed to me as though a lot of Americans implicitly assume that Israel is sort of a payment of blood-debt for the Holocaust, but O! Jerusalem! will cure any illusions on that score. It was more like an escape-plan for Polish Jewry who were prescient enough to realize that European anti-semitism was building to an insane crescendo, as it did.

I’m Suspicious » « Le Drool (as they say in Western Europe)