I was a bit unsure about whether to post this, because I’m not doing much that’s interesting, except following other people’s recipes, mostly. But there are perhaps a few things worth noting.

One of the things I suppose that’s worth sharing is the other peoples’ recipes I am using that have worked. But I’m getting ahead of myself a bit. Let me scroll back: I love dim sum. I also live in the wilds of Pennsylvania where the nearest dim sum is in Philadelphia. So, it occurred to me that maybe I could make my own wontons, and freeze small batches, so that I could adorn ramen noodles. I’ve put this off for ages, for the usual reasons: fear of failure, laziness, etc. I’m very careful not to fail with recipes involving meat (especially pork) because I am aware of the fact that someone’s life was taken to make my pork shoulder, or whatever.

There are plenty of recipes for wontons out there, and it turns out they are ludicrously easy to make. Seriously, if I had known how easy it was, years ago, I would have enjoyed years of yummy wontons in my soup. Most of the recipes call for ground pork and scallions, but I (naturally) had to experiment so I pan-sauteed a couple of shiitake mushrooms in sesame oil and a hint of dark soy sauce, then shredded them and added them to the pork/scallion mix. Note: I may be doing a bad thing, here – I’m cooking the mushrooms but adding them to uncooked meat and onion and then freezing the result. I need to learn a bit more about how botulism grows, but for now I’m just going to take my chances. Botulism kills an average of 109 Americans annually, which means it’s nowhere near as deadly as police.

I made some of my own wonton wrapper from scratch, and quickly ran out, so I went to the grocery store and got some of the pre-made wonton wrappers. They are much better/more consistent than what I made and the results are excellent. In fact, I could tell that most restaurants use the pre-made wrappers, too. It cut the effort dramatically and the results are the same or better, so I am going to use pre-made wrappers from now on. 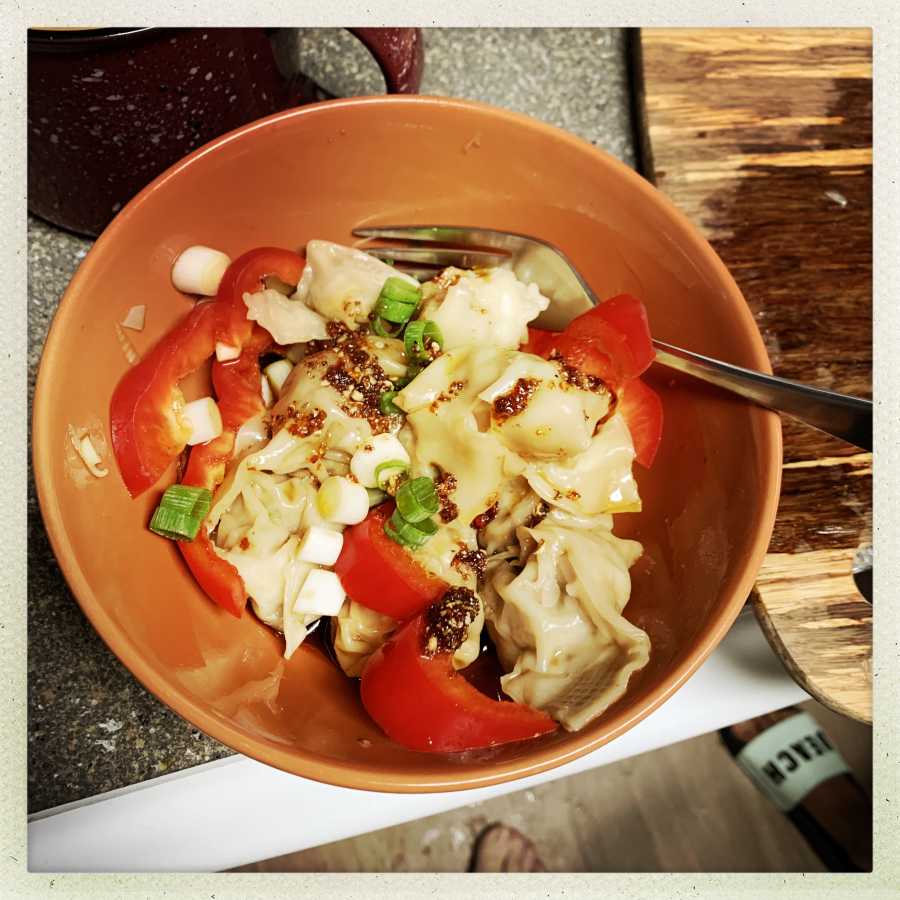 Speaking of vacuum baggers. I bought a Foodsaver(tm) back in 1999 because I was doing some carbon fiber prepreg shaping to make pieces for a rocket, as one does. Once the rocket was lost in the mists of space-time and a cornfield, I had a vacuum bagger and one day I decided to bag up some left-over chili from a batch I had made. Instant life-changing experience! Ever since then, I make stuff specifically for bagging: spaghetti sauce, chili, fish, meat, seafood, pulled pork, and now wontons. The Foodsaver died last summer and I got a Weston pro-somethingorother and it works really well. About once a month I make something that’s worth bagging. It opens up a lot of options for me, since I can make large batches (i.e.: spaghetti sauce) and enjoy them for almost a year. If you make your own food and do not have one of these wonderful bits of technology, I encourage you to look into them. I will not bore you with pictures of vacuum bagged stuff.

So, to make wontons: it’s easy and you should do it. You just stir some stuff together, for goodness’ sake, and make little packets of it, and freeze them.

You may have caught the “sichuan peppercorn sauce” in the caption above. For some reason, I decided to try making my own instead of buying some from Yank Sing. And, wow, am I glad I did. This is the recipe I used [woksoflife] It inspired me to get some sichuan peppers, and sichuan peppercorns on ebay, where they are easy and cheap to find. From there, it’s a matter of grinding the peppercorns, peeling garlic, etc. The recipe is easy and I won’t repeat it here except to say: do not sniff it. Total build-time is about 2 hours, mostly consisting of simmering garlic and ginger in oil to infuse the flavor. The results are astounding – the sauce has three layers in it, a kind of sweet and nutty oily taste, then a peppery taste with lots of punch from the ginger, followed by a lingering burn. There are also hints of caramel in there, from the brown sugar, which interacts with the hot oil when you mix it. On wontons the sauce is a revelation. I’m serious. I have already mailed out a couple of small jars of the stuff, including to a friend who’s a professional chef, and everyone loves it. Oddly, even people who don’t like hot food seem to find it alright, in spite of the severe lingering burn. The other night I made pasta with butter, sun dried tomatoes, and a bit of the chiu chow sauce. I am going to try serving some pan-seared scallops with a little dollop of the hot sauce on the top the next time I am trying to make a fancy meal. [In these times, that may be a while]

If some of you, for whatever reason, feel that you absolutely must have some of my chiu chow sauce, contact me and I’ll mail some out. I might have to make another batch, first, though. Maybe I should auction off some hot sauce. 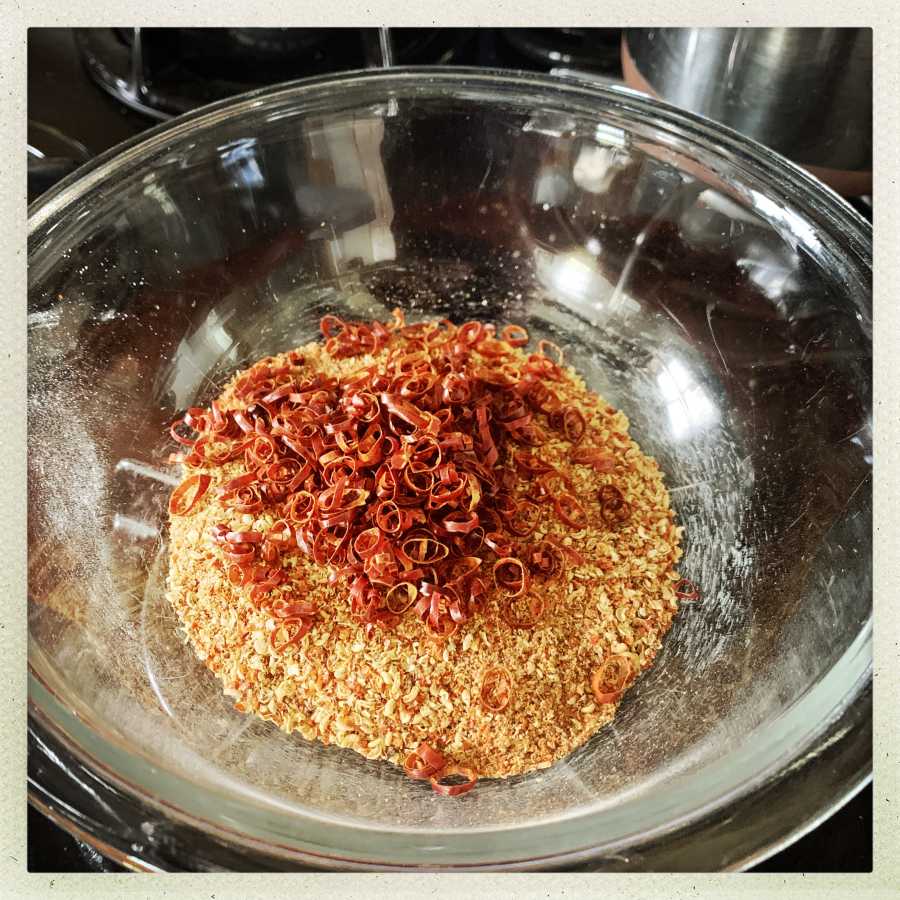 Flush with my successes, like a neo-con re-mapping The Middle East, I kept charging ahead. Next, I attempted char siu bao.  Those are the fluffy white dumplings filled with succulent, heavenly, pork belly. My first attempt is not worth mentioning, other than to suggest you avoid any recipes for the dough that suggest adding a large amount of corn starch. The dough is basic except that it uses two forms of leavening together: yeast and baking powder. It’s weird but it works. Also, there’s a recommendation to use special bright white flour. The bright white flour is hard to source; there’s a store in Singapore that says they will ship it, but… uh. White Lily bleached flour is pretty close and my bao are white enough and taste fine. To deconstruct it a bit: char siu is barbecued pork belly. Bao is “bun” – hence char siu bao. Now, let’s talk about the char siu.

My first attempt at the char siu was not good. I used some pork tenderloin I had in the freezer, and it’s not fatty enough – the sauce depends on the sweet stickiness of the drippings. So I got a couple of pork spare ribs and broke them into pairs and vacuum bagged them for later. It turns out that the trick for good char siu is to marinade it overnight – which is perfect because you can broil them the next day while you are making the dough. I decided to break from tradition and made my char siu marinade with thick-cut marmalade instead of brown sugar, and used a generous wallop of garlic vodka and ginger vodka. At this point in the recipe be conscious of salt management: if your marinade is salty and your final sauce is salty, it can get a bit much. I put the ribs in a small zip-loc bag and added stuff: 2 big blobs of marmalade, some red food dye (traditional), garlic vodka, ginger vodka, dark soy sauce (a bit) 1 tsp of cornstarch and sesame oil. The next day, it goes on a rack in a tray in the oven on “broil” 300 degrees for an hour, rotating and basting with the left-over sauce. 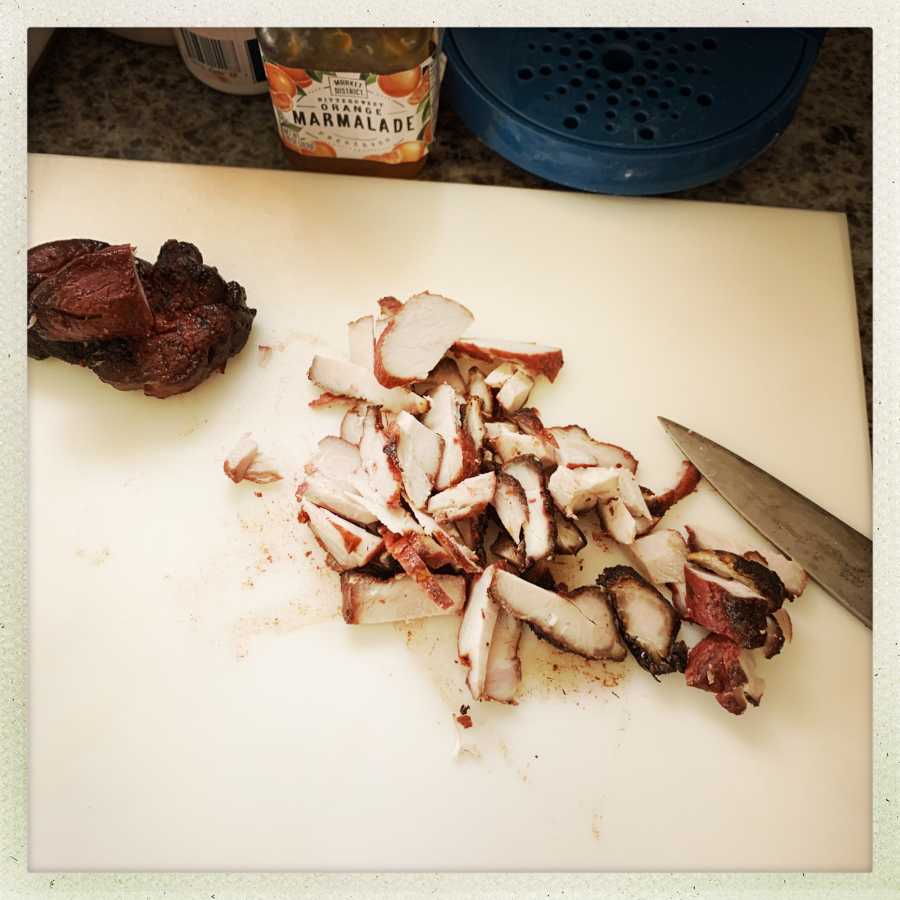 Apparently you can freeze the char siu, too, but I don’t think I will make bao very often, so it’s not worth it. From the grilled bao, you make the stuffing sauce, which I did with some dark soy, a bit of hoisin sauce, some of the pork drippings, more marmalade, and some pickled beet. (!) What can I say? It tasted heavenly. 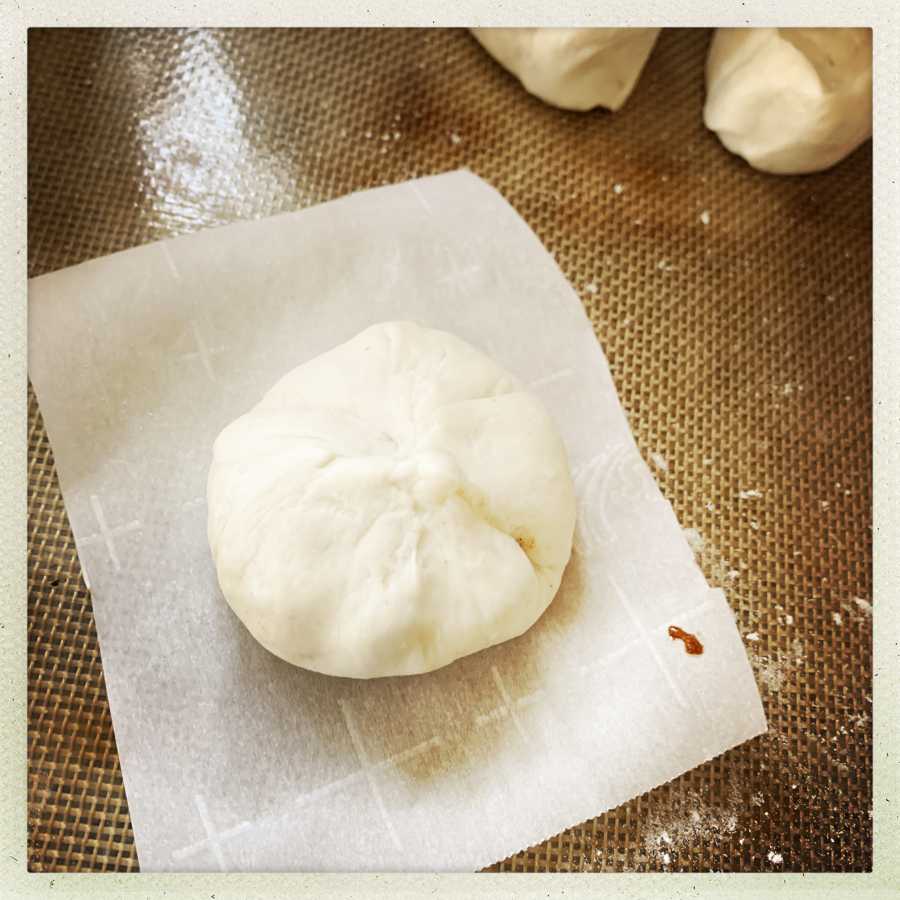 You roll the dough out (it should be sticky and stretchy) with a glass or a small roller, so it is thick in the center and thinner on the edges, then put a dollop of the char siu in the middle, and pull the edges up and kind of jiggery poke and mush them together. The first one or two you do will be sketchy. Make sure the dough is not too thick, or too thin – steaming the bao will pressurize them and they can pop open, so don’t be gentle when you smoosh the top shut. I’ve seen bao that have an open top, which I suspect is to let the steam out. 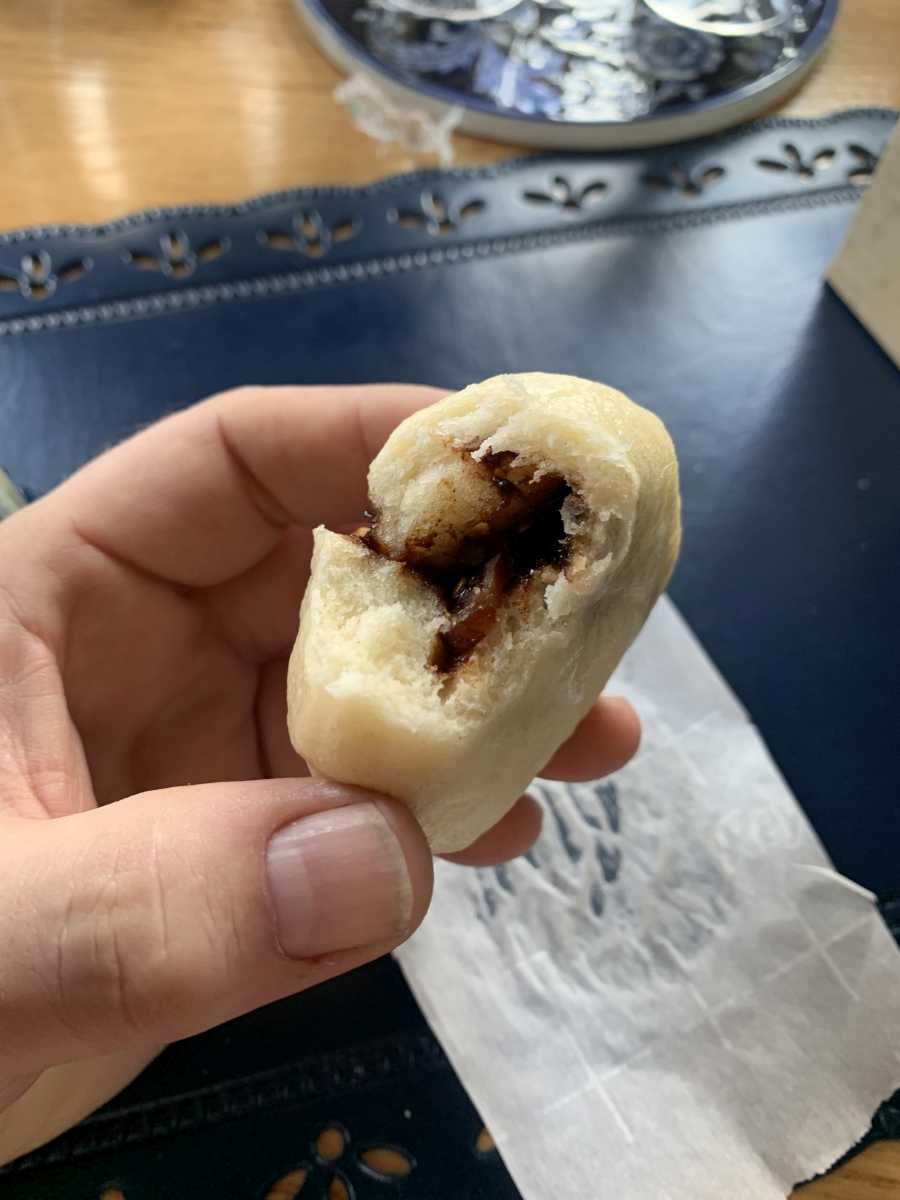 Doing all of this made me realize that a dim sum restaurant is mostly an exercise in terms of economies of scale. I could easily make a variety of wontons or siu mai, but I’d have to manage stuffing, storing, and steaming them separately. Just the process of making bao is tricky enough that I wouldn’t want to try to, say, make a sunday brunch with bao, wontons, and siu mai. It’s a lot of work. I’m pretty sure, though, that siu mai would freeze like the wontons, and then I’d basically be making bao and steaming the siu mai and wontons. Siu mai are basically wontons with shrimp and pork. I’m going to try making some wontons out of shiitake and scallops.

It is very satisfying to know how to make food that delights you, or familiar comfort food. In retrospect, I think that this project has been part of a quest for stability in these weird times; it’s good to know that wontons are still delicious, and I can’t see how Trump can ruin wontons – though I’m sure that he’ll eventually get around to trying. Perhaps this will serve as encouragement for any of you who’ve been wanting to try.

Now, I have a trollish-sounding question, that kept playing through my mind as I was working on my cooking: is this cultural appropriation? The standard come-back when a white person starts culturally appropriating is: “no, I was doing it with respect!” which is also true in this case but, if I were to stick my ethnicity, I’d be making lrish stew (which can be very good, I admit) and lefse and  lutefisk (which is never good unless you are starving).