I’ve noticed and learned a few more things about teaching blade-smithing. Some of the tricks I just made up on the fly really work: for example, the trick with the plywood has turned out to be very handy.

Some operations are tricky and managing the tongs and tools without dropping a yellow-hot bar is something that takes practice and experience. So, how to do that? Simple: use a piece of plywood as a stand-in.

For example, twisting a bar requires that you move fast but precisely and carefully, get the bar out of the forge, turn it end down, position in the vise, tighten it down (which means you need a one-handed grip on the tongs) then pick up and correctly orient the torsion kunstgrabber thing, let it lock onto the bar, and give it a few twists before the bar cools. Oh, and you have to hold it straight and twist it straight or it noodles. Being able to take a piece of plywood and say, “simulate it!” greatly increases the chance that things will make sense when the time comes. 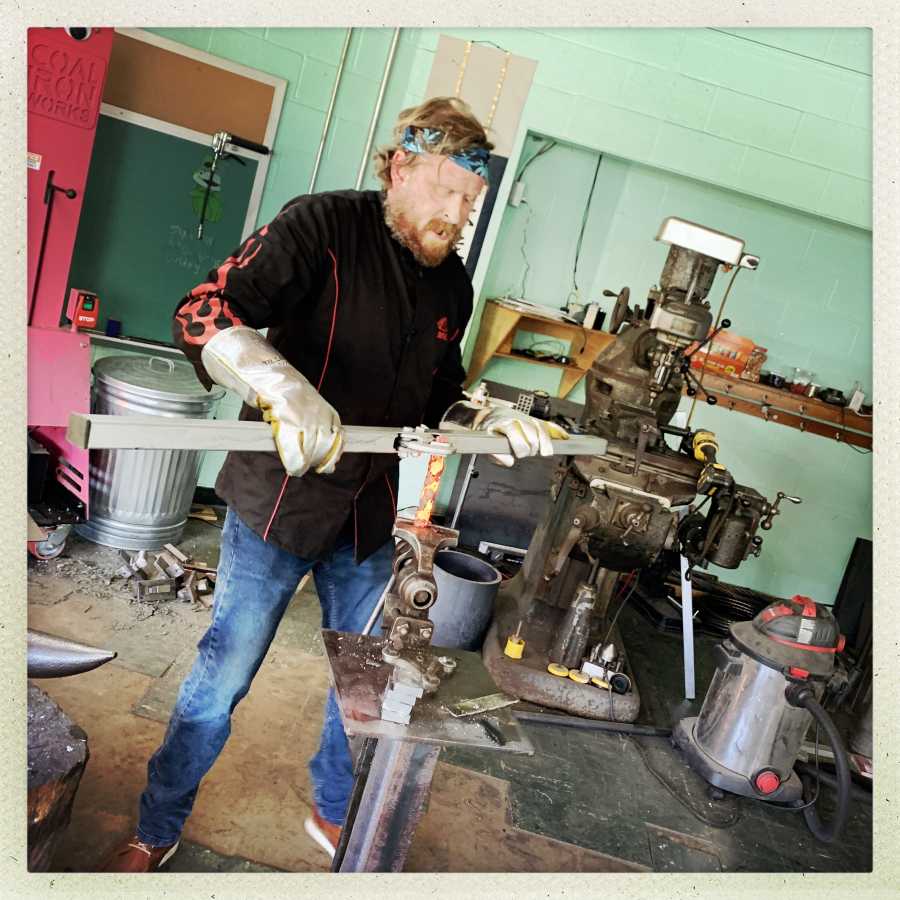 Tomorrow is going to be shaping and hammering and cleaning up the blade, and then grinding to get it ready for a quench. How to explain the right way to get the bevel set on the blade? Probably with a piece of plywood, since that’ll take an “edge” but it’ll be a lot quicker than steel. Anything that gives the hand feel will help reduce the chance of something going wrong.

When you’re teaching a kinetic task that can be dangerous, you have to make sure that you have a good sense of when to yell corrections and when to just stay silent and say them later. For example, in the image above, his hands are too far from the ends of the twister, so it’s taking him much more effort. That all comes with experience.

The layout of the bar he’s making is complicated. It’s mid-layer twist sides on a 1095 core. That meant making a stack of 10 pieces of 3mm x 30mm steel about 6″ long, cleaning the mill scale off and tacking them with the MIG welder, then welding them down into a bar, drawing it out, and letting it cool overnight. This morning he cut it into 4 pieces, cleaned the forge scale off, tacked them, and welded them down into a bar, drew it out maintaining it in a square shape, then rounded it, twisted it, and flattened it back out. After that, the bar was air-cooled, cut in half with a diamond wheel (rather than waiting for it to anneal) then forge scale cleaned, a piece of fresh 3mm 1095 cut, stacked in the middle like a sandwich, and welded and formed down into a flatter bar. 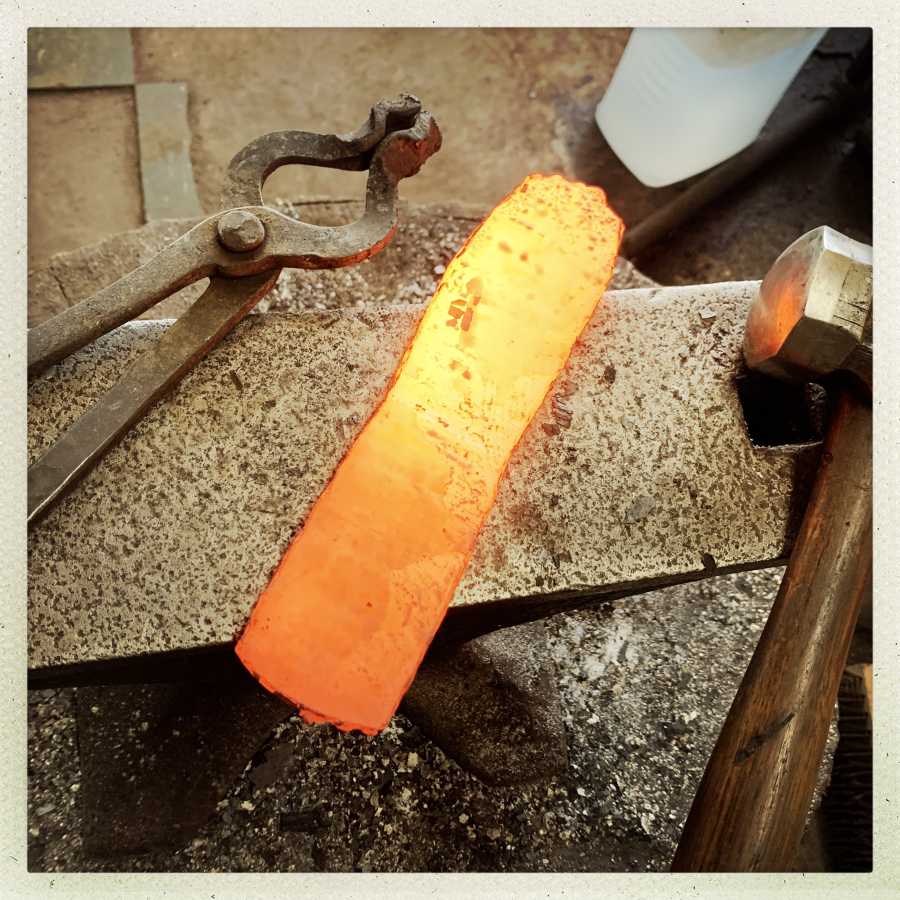 At Badger Forge we reject the concept of “beginner” level work

Tomorrow that’s going to get cut into a shape from which the blade(s) can be hammered. Now, the challenge is doing that without losing track of the slice of 1095in there that makes up the edge. But since the sides are also 1095 and 15N20 it won’t be a disaster if the edge gets lost – it’ll still be sharp and strong just slightly less pretty.

Another cool part of how this is working out is that repetition under the student’s control is a fantastic way to reinforce learning. We started the morning with me rattling off the broad steps and Sam just doing them without close supervision. It’s nice to work with people who understand how laboratory processes are done, because you can trust them to get the steps right. Last night I did have a moment of uncertainty when I realized that I had not checked that Sam had shut the gas to the forge off properly – would the building blow up when I flipped the light switch? Obviously, not.

It has also been interesting (and somewhat validating) to see that other people hit the wall about 5-6 hours into a forging session. I wasn’t doing anything – I was pretending to be a capitalist boss who controlled the means of production – but it’s tiring to watch someone else and constantly be assessing it for safety, probability of success, and refinement. It’s interesting how our brains and bodies just don’t perform after they’ve been running hard for hours; we both started to feel a bit punchy and stupid.

So, we packed it in for the day, and something was nagging at the back of my mind… I was forgetting… something. Then, as we were in the car and heading to get some food, my phone rang. Oh, no! I was scheduled to speak at an ISSA chapter meeting (virtually by Zoom) on the problem of “who can you trust?” and I had somehow turned off my phone’s ringer while fumbling to take pictures of blacksmithing. The conference organizer was calling to make sure I was OK because I had said I’d log into Zoom 15 minutes early and there was no Marcus. I did a very illegal U-turn in the middle of route 879 and floored it, glad for once that the Tahoe has a way over-muscular engine. There’s nothing like blasting through deer country at 70mph in a tank-like SUV while reeking of sweat and forge smoke. I ran upstairs and put a black blazer on over my black Badger Forge Tshirt, Boris Johnson’d my hair, logged in, and did my talk. That’s the second time in a 30+ year career of consulting and speaking that I’ve been late for one of my own talks, and it’s the last. I hate the feeling of “I am going to be late! OMG!” flop-sweat spouting out of every pore, panic. Then it was time for a couple of hard ciders, a shower and a nap.

If everything works out right this is going to be a pretty flashy piece!

Profiling » « 3 Strikes and You’re Far Out