They don’t care, anymore. Is that a sign of insanity, or confidence?

“Hey, Florida voters! We’re going to open your waters to oil exploration if we win in November! PS – Vote republican!”

Maybe the republicans are just that sure they can steal the election, and the party’s underlying sadism is on display. “Why would we do this to you? Because we can.”

The Trump administration is preparing to open the door to oil and gas drilling off Florida’s coast – but will wait until after the November election to avoid blowback in a swing state whose waters both parties have long considered sacrosanct, according to four people familiar with the plan.

Perhaps the people of Florida deserve a big, sticky, oil spill on their beaches as a way of thanking them for voting republican. Welcome to the post-truth reality of 2020 – out here in Pennsylvania, we’re getting fliers in our mailboxes claiming that Joe Biden is going to kill 600,000 Pennsylvania fracking jobs if he gets into office. There are nowhere near 600,000 fracking jobs and what’s killing fracking jobs is the shocking price drop of Saudi, Iraqi, and Iranian oil. Also, Biden’s hardly going to rock the corporate boat that much. Unfortunately.

Drilling in the eastern Gulf of Mexico would fulfill a long-sought goal of energy companies, giving them access to potentially billions of barrels of oil that have been off-limits since the federal government withdrew leases it had sold in 1985. But even the possibility of drilling is a politically explosive topic for Floridians, who worry that oil spills would devastate their tourism-based economy in a reprise of the 2010 Deepwater Horizon disaster.

Let me remind anyone who’s been asleep at their keyboard: humanity is on track for extinction caused by waste CO2 emitted by burning fossil fuels. “Accessing” potentially billions of barrels off Florida just means that oil prices will stay low, allowing fossil fuels to compete with renewable energy.

The IPCC chart shows several projected possibilities for CO2 output based on moderate increases, continuation of the existing rate of increases, a significant slowdown of increases, and a severe slowdown of increases. The A2 scenario is the one we are tracking and appear to be dead set on continuing to track; that’s the one with the catastrophic tipping-point increases that result in run-away heating. That’s the one that the republicans and (to be honest) the core of the democrat party “centrists” like Nancy Pelosi appear to want. Could it have anything to do with the fact that Nancy Pelosi will die rich in comfort well before the impact progresses past the difficulty finding bluefin tuna sushi, the California wildfires, and the increase in agricultural product prices? How much of this is due to the fact that rich people are better positioned to weather these problems? If the cost of bluefin quintuples, Nancy Pelosi can still afford it. 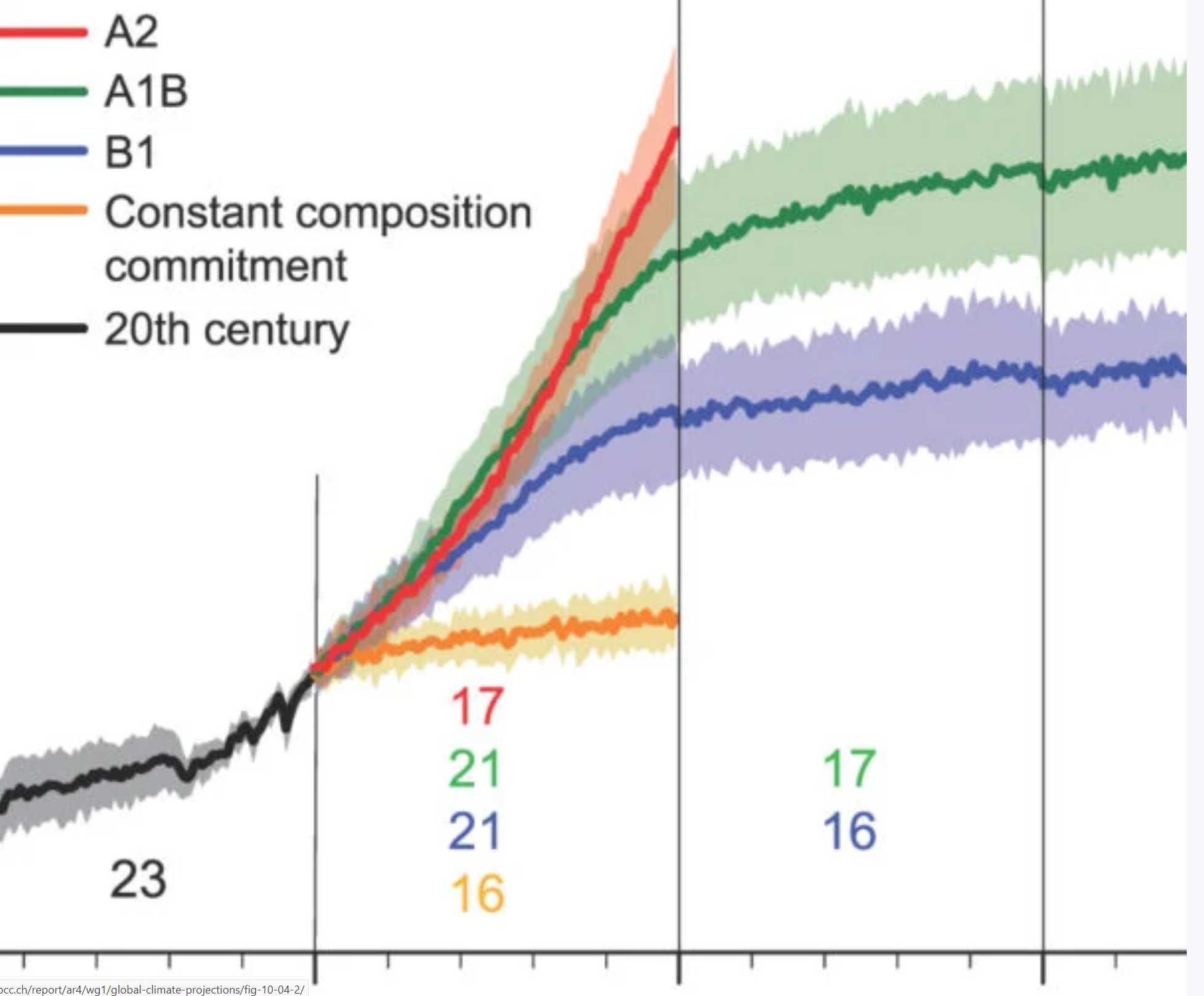 As a reminder, a 2-4C increase in temperatures is going to result in economic distress and food shortages in many places. Including California and the US midwest. We’re already in the early stages of the slow-moving disaster. At the high end of 2-4C, 4C, parts of the planet become uninhabitable. That’s already the case with places in Saudi Arabia and Arizona: if the power fails, the AC stops – and if the AC doesn’t come back on in 6 hours people die. If the AC doesn’t come on for a week, people will get in their cars and run the car AC while they try to escape.

The red line, which we are tracking, is the one that maps to a 6C-10C increase, which is “game over, man” in the immortal words of Pvt Hudson. There won’t be a sudden drop even if humanity gets its collective shit together, these effects will certainly last thousands of years, maybe tens of thousands. Congratulations, humans, you’ve terraformed the Earth. Too bad it was already pretty nice, because it’s not going to be really soon, in geologic time-scales.

In case going after Florida’s oil isn’t enough, the Trump administration is also preparing to contest the newly exploitable sites at the poles. Because, mere dick-waving isn’t enough when there’s oil in the ground.

Donald Trump has ordered the construction of a fleet of icebreakers and bases to pursue US interests in the Arctic and Antarctic by the end of the decade in a signal that his administration is going to take a more aggressive approach to the contest with Russia and China for polar resources.

“US interests” means only one thing, because the polar regions don’t grow opium (yet): oil.

Trump issued a memorandum on “safeguarding US national interests in the Arctic and Antarctic regions” which calls on the administration to come up with a plan within 60 days that would include at least three heavy icebreakers to be built by 2029, and recommendations for locations to build two support bases in the US and two on foreign soil.

The memorandum appeared designed to expand and inject extra urgency into a longstanding US Coast Guard plan to build three heavy and three medium icebreakers. It suggests the US look into leasing arrangements while the new fleet is being built.

There is no interest in science, no interest in anything except gaining influence over exploitable natural resources. It’s not as though the US needs icebreakers in order to get riot police up to the arctic regions. It’s not as though the US wants those icebreakers to help deal with emerging viruses like Covid-19. The US only gives a damn about one thing, and it amounts to “how can we possibly make our problems worse?”

Meanwhile, another prediction by the boffins is coming true: [guardian]

Oh, yeah, there are nasty ancient pathogens in that ice? Great. Fortunately it’s just a few things that are very tough, like anthrax, that can survive being buried in permafrost – we don’t have to worry about a smallpox pandemic coming roaring out of the deep freeze.

The US’ incompetent response to Covid-19 appears to mirror its strategy for global climate change: “we’ll tough it out.” Here’s an analogy:

Suppose you get in a car with a friend and they immediately jam on the throttle and start rocketing down the highway, speeding up the whole time. You scream “what are you doing?! Slow Down!” and they tell you “I’ll slow down but only after I hit that big concrete barricade up ahead of us.” Then, “We’ll be fine.”