The counter-reaction to “defund the police” movements has been distressingly predictable: the assumption is that, without police, current policing practices would stop functioning and therefore it’s a bad idea. Basically, it’s a declaration that the status quo is the only way that can ever possibly work, and it ignores the fact that there was a time where civilizations did exist without policing as it is done, today.

While the police and their supporters continue to promote practices that would be immediately familiar in the 17th century, we are surrounded by “internet age” innovations (not all of which are great) including technologies that can be used to produce “flash mobs” and magically summon cars to take people who can afford it from place to place in solitude and relative comfort. What if the current structure of policing was blown apart and reconstructed for the internet, GPS, high surveillance age? Because of the way we currently do policing, we’re trapped in this circular reasoning that “it works” (for some) so “don’t break it.” But current events have showed that it doesn’t work, is heinously expensive, rewards the wrong parts of the local economy, and – oh, yeah – it’s racist and murderous. 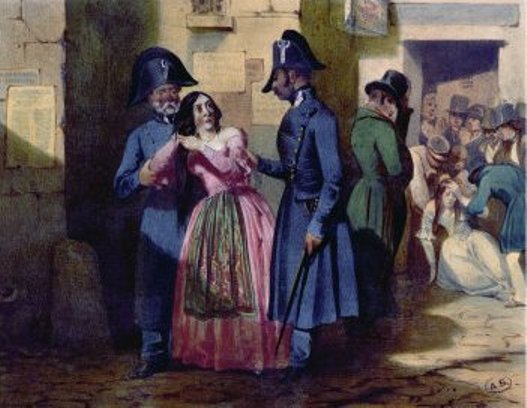 French Police in the Napoleonic era shake down a prostitute

Most jurisdictions in the US spend up to 1/2 of their budget on policing. By any terms, that’s ridiculous. For one thing, it conceals the underlying tradeoffs that are being made by society, for example: mental hospitals were largely shut down under Reagan in the 80’s, and police took over as first responders for people who are having mental problems or drug problems. That’s a recipe for disaster, but the US cheerfully inflicted it on itself, and patted itself on the back for “getting tough on crime.” The underlying issue is a matter of race and class consciousness and how tax dollars are allocated. I believe that it’s largely meaningless to talk about police reform without taking the whole problem in a broader context of social services and how they are provided. I will note: social services are something I assume a government is supposed to provide; I agree with Rousseau that that’s what government is and does unless it’s a failed and illegitimate state. When you look at today’s militarized mall ninjas, I think it’s hard not to see the US as a failed state and its legitimacy is in doubt when up-armed cops deliver beatdowns to peaceful protesters.

I obviously have not had time to think through a complete proposal but I thought I’d bounce a few ideas off of you.

First and foremost, technology does change things. Other than new guns, cars, and criminal records databases, modern police are straight out of the 18th century, but they have cool sunglasses. What are some of the changes that we can exploit to build new police systems?

Let’s look at that last point: right now, it’s probably no longer worth worrying about cop cams. The cops had their chance with that one, and blew it – preferring to manipulate the evidence or refusing to carry them. Now, every civilian who sees a cop should be recording everything they do and uploading it to the internet. There are scads of CCTV surveillance cameras, too, such as the ones in Baltimore that failed during the crucial 60 seconds when Baltimore police broke Freddie Gray’s neck – those ought to be under civilian control not under control of the city.

Take all the points above and knead them into a smooth, elastic dough, and you get a new view of policing that looks like: 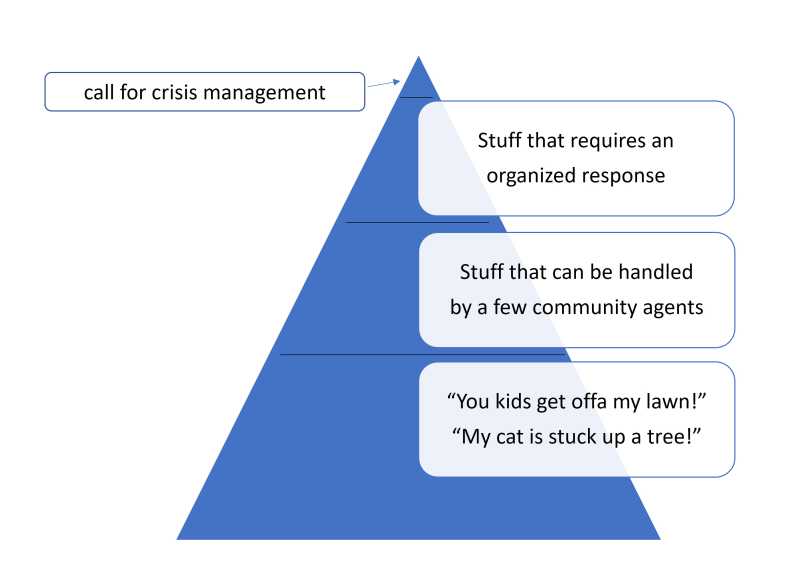 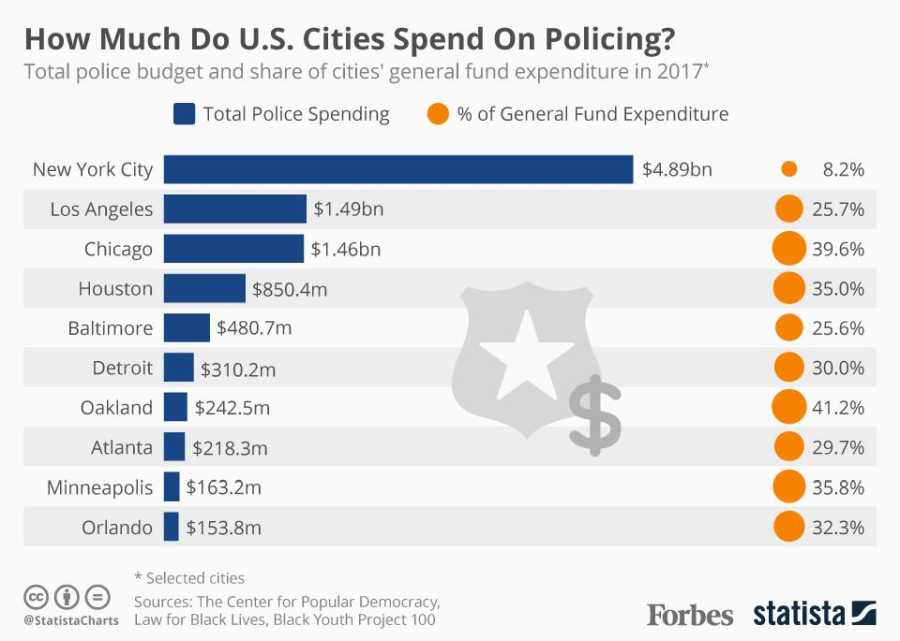 That’s probably enough, right there, because it illustrates the big problem with government: it’s all connected. You can’t really reconstruct the police without reconstructing how accident victims get taken to emergency rooms and how they are managed and tracked (because it may require investigation). So, to reinvent the police, you need to reinvent local government and to reinvent local government you need to reinvent the national government. It’s obvious to anyone except a republican senator that the system is a mess, right now, because governments at all levels have reacted tactically by instituting “reforms” aimed at short-term electoral goals. You cannot really re-work how policing is done without addressing the Reagan-era’s closure of mental hospitals, and the creation of a large number of homeless people without mental health-care, who became a problem for the police. Whenever a cop shoots a person with mental illness, should we entirely blame the cop, or blame Ronald Reagan, or the “let us hate and be cruel to the poor” policy of both wings of the federal government? Nancy Pelosi is also a “deficit hawk” which is code for “she hasn’t met a poor person in half of her life because she didn’t get rich in order to have to hang around poor people.” Having the government provide medical care as a service would further reduce the need for police to be involved in medical interventions which happen in a possibly criminal context. It is a tough issue: a cop is expected to handle a shooting victim while worrying about becoming a target, and having to potentially deal with the shooter, too. Police have huge complex problems to deal with, which is why I think policing needs to be re-factored, tiered and prioritized, with factored capabilities matched to situations – instead of sending a car with 2 cops, 2 shotguns, 2 9mms, and a laptop, they should have someone at the scene diagnosing and triaging the problem with a smartphone and a dispatching app.

Part of the reason why policing in the US has become so dangerous to its citizens is because we have allowed it to be done horribly incompetently. But, for 1/3 of your local budget, what do you want? 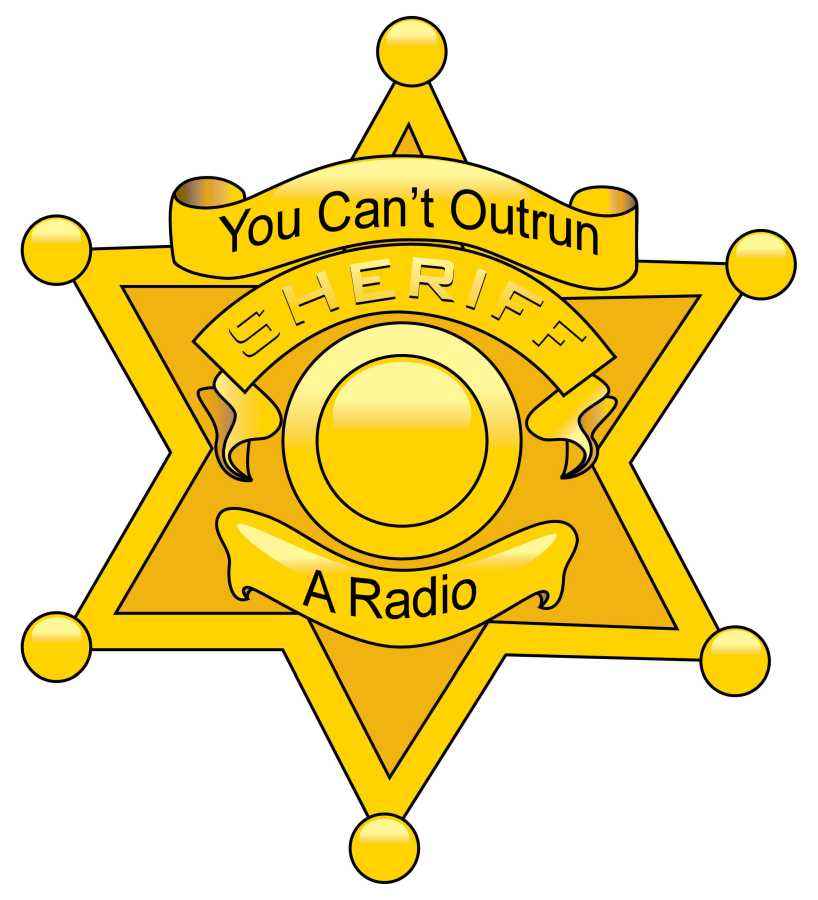 This is probably an over-generalization, so I didn’t make it in the main article, but it appears to me that “police reform” efforts have typically centered around giving the police more money for training, which is why the unions go along with it. Anything that threatens their budget is treated like a lethal plague. That’s part of why I like the idea of community agents, who get paid for their service but don’t come with a gigantic infrastructure cost for expensive cars and guns and donuts and whatnot. If they want a big hat, they can buy it on their own.

I know teachers who have had to pay for class/lab materials out of their own pockets. Yet the police manage to suck down 20-30% of a municipal budget and they buy military gear so they can terrorize their customers. That is so goddamn backwards that words fail me. If cops want to buy military gear, then by all means put in place a “BYOG” (bring your own gun) program and they can have a “Go Fund Me” for sniper rifles and burp guns – in the mean time, fund the fucking schools. Americans sit around wringing their hands asking “why are we such a bunch of ignorant, violent chucklefucks?!” Well, there’s your answer.

Iceland ski patrol story: One of the ski patrol guys I talked to had served security for the Reagan/Gorbachev meetings outside of Reykjavik. He had a picture he showed me of himself and some of his ski patrol buddies with the Russian and US Secret Service security team(s). You’ve got to picture this: A stereotypical Secret Service guy in a dark suit and tie with shined shoes, standing next to a huge Russian who looked like he could squeeze juice out of rocks with his bare hands, and flanking them were two even bigger icelanders who looked like Thor’s big brothers, wearing these beautiful icelandic wool sweaters that fit them like spandex. The icelanders had huge grins, the others not so much.