God blames entire groups of people for the actions of individuals.

To put it mildly, that’s problematic. Among humans, group-blaming is seen as a form of prejudice, bias, or sloppy thinking. Our notion of “guilt” depends on being able recognize an individual as responsible for their actions, which implies that “collective guilt” is a situation that only occurs when everyone in a group was responsible to some degree or another for a misdeed. In other words, if you were a prosecutor trying a group of defendants for some crime, you might argue that every one of the defendants had some involvement in the crime – but, then, you’d have to break down the degree to which each individual was involved, and how their actions made them responsible for the commission of the crime. Group trials and group punishments are the sort of thing that we expect from authoritarian dictatorships that don’t respect the rule of law. Granted, the god of the old testament is an authoritarian par excellence, we would consider collective blame to be a moral failing if it were a human doing it.

There have been various attempts to patch this problem by claiming that god’s actions are always good, because god is the very definition of good (divine command theory [iep]) but that’s circular reasoning: god’s actions are good because god is good. Plato’s Socrates famously tried to interrogate the question of the gods’ ability to define goodness in his Euthyphro dialog:

Plato’s sockpuppet is, as usual, laying a trap; there is either a higher morality that the gods adhere to, or the gods are the source of morality and we are therefore dependent on the divine whim. Socrates never has to make the follow-on argument, which is that – if what is holy (e.g.: what is right) is what the gods want, then oughtn’t the gods be a bit clearer to us about what they want? We can’t let the gods off lightly, saying in effect that they have a rule-book of what they consider moral/immoral and we’re expected to find that out the hard way. For one thing, what if that rule-book is incoherent and full of contradictions? It’s still what the gods want, but it’s not fair for them to hold us to account for a set of rules that have not been explained.

This topic, of god’s engaging in collective blame, is central to the whole creaking edifice of christian morality – it connects to inherited blame (I’ll get to that, next) and the question of whether it’s moral to hold someone responsible for something that they cannot even understand. The usual patch christians apply to that question is to skip over it by waving the magical macguffin “free will” at the situation; free will apparently being a convenient way of assigning blame for decisions that a person might have been able to make, therefore it’s their fault, or something like that. Christianity has been evolving for thousands of years, and proponents of the religion have offered up all kinds of answers to these sort of questions – glib patches thrown over top of great big leaking flaws – but those answers don’t come from god; they’re the product of intelligent and well-meaning (maybe) theologians who were trying to bail the metaphorical water out of the boat. This is an important point: doctrines like divine command theory were necessary as a way for humans to explain to other humans how it is that god supposedly gets away with doing hugely immoral things.

Oh, they’re not immoral because: god? That’s not an answer. For one thing, it’s pretty darned immoral in its own right to create and toss up a great big barrier of bafflegab in order to justify performing no further enquiry into god’s morals. It’s not a moral sin, like murder (which god is OK with, by the way) but it’s a crime against one’s own intellect, to try to jam such contradictory ideas into one’s own world-view. Back in the 1990s, riding a metroliner from Baltimore to New York, I found myself sitting next to a rabbi, who asked me politely if I would please put away the copy of Playboy that I was reading for the articles. A cheerful discussion ensued, in which the rabbi did a great job of holding up the reputation of rabbis for being argumentative, and we eventually got to the question of where god’s morals come from. He laughed and said, “Socrates should have been a rabbi,” which was unforgettable for me, but then twisted around and said “god gave us a moral sense so that we can judge the actions of others, including god. Surely he would be proud of us humans for exploring so enthusiastically; perhaps he learns from us, not the other way around.” That shovel-load of fewmet was so graciously and elegantly delivered that we spent the rest of our trip together in companionable silence, me chewing thoughtfully on it. If we were to take the rabbi’s argument seriously, we’d have to conclude that we were possibly put here to judge and assess the flaws in god’s behavior, to flesh out and fix god’s moral compass. If so, that’s a hell of a burden to put on humanity; we never asked for it. 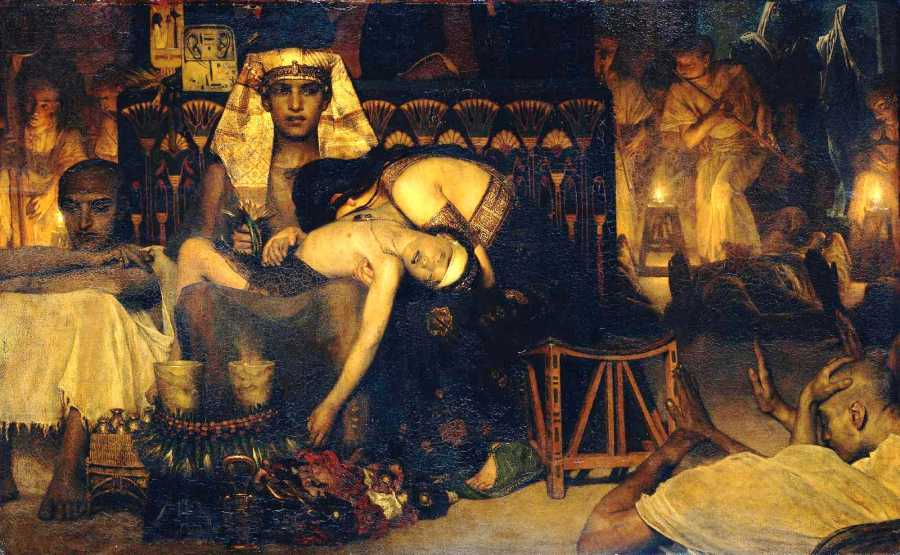 “Collective guilt” is a more typical framing for this situation, but it presupposes to even a slight degree that there is, in fact, someone guilty of doing something. That’s why, instead, I’m going to say “God blames entire groups” – it’s more clear that it’s god that’s making a moral choice, and that choice is to blame a collective.

The canonical example of collective blaming in the bible is the story of exodus, where god kicks the Egyptian’s asses for Pharaoh’s decision to abuse the Hebrews when Moses asks him to free the Israelite slaves, Pharaoh makes them work harder. This is portrayed as, clearly, an immoral act and justifies a god-provided saturation bombing that torments all Egyptians including killing their firstborn. Now, had god inflicted all of the plagues on Pharaoh, personally, it might have been reasonable and the Egyptians might have seen the error and unpopularity of Pharaoh’s ways, and everyone could have lived happily ever after. But, no, god decides to punish all of the Egyptians and specifically their children who – in case anyone does not realize that Egypt was an autocracy – were not policy-makers who were responsible for any of what was going on. There is no human prosecutor that has ever lived, who would try to make the case that the Egyptian first-born were responsible for what happened to the Israelites, and therefore deserved to be punished. God specifically punished the one class of Egyptians that could arguably be innocent of crimes against the Israelites. And punishing a child’s parent by killing their child is monstrous. 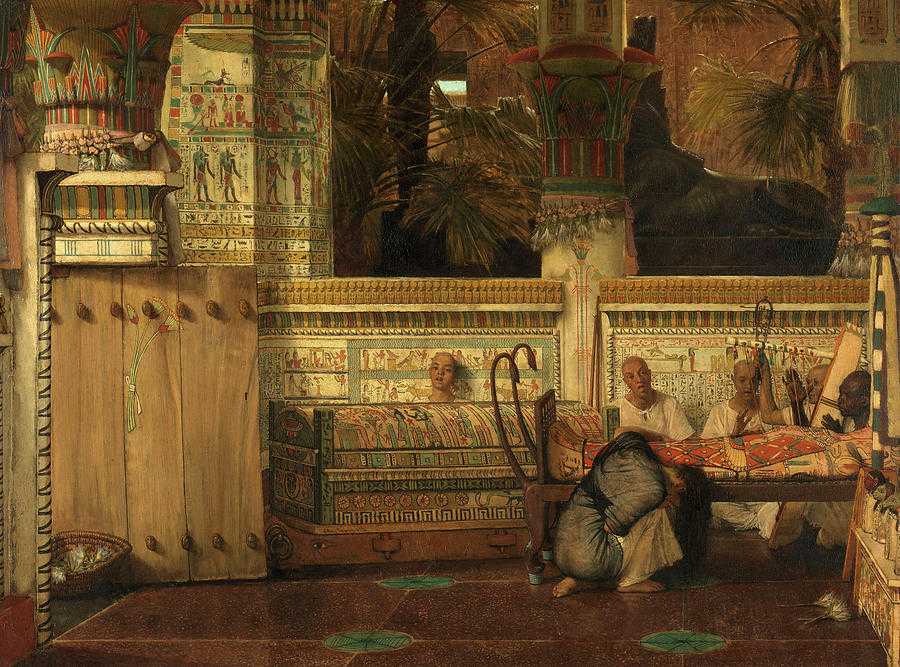 The purpose of these stories in the bible, we are told, is that they are not necessarily historical documentary – they are parables – instruction for humans in the ways of god. It’s tempting, then, to say “god did not literally punish all the Egyptians for Pharaoh’s mistake” but that avoids the claim that that is exactly what we are supposed to be learning from the bible, whether it actually happened that way, or not. The “moral lesson” in the bible is unmistakably that god engages in collective blame and collective punishment. The Egypt incident is hardly the only place in the bible where god engages in collective blame and punishment but it’s a good example, for the clarity of its immorality. God is Bomber Command Bad, in this case, laying waste to the lives of all Egyptians because Pharaoh was culpable for … oh, wait. Maybe it wasn’t even that simple: depending on the translation of the bible we’re talking about, it may be that god manipulated Pharaoh into needing to have his own ass kicked:

And the Lord hardened the heart of Pharaoh, and he hearkened not unto them; as the Lord had spoken unto Moses.

Why did god have to do that, instead of letting Pharaoh follow his own free will? Was Pharaoh about to let the Israelites go, and it was just too good an opportunity to make an example of all of Egypt, so god went ahead and dropped the bomb on them pour encourager les autres?

If we want to be kind, we’ll assume that the Egypt incident is not documentary, it’s a children’s story intended to teach children a moral lesson. And that lesson is: god is an arbitrary, scary mother*!*&! who has serious control issues. Are christian children taught these stories in order to help them grow up to be the kind of moral beings who drop nuclear weapons on cities full of civilians?

Of course not all christians believe in collective blame. Some, certainly, would recognize collective blaming as immoral in itself, but then they are left squaring the circle between biblical teaching and their own moral system: did they adopt god’s morals, or are they morally superior to god? Socrates was brutal to poor old Euthyphro, but Euthyphro was asking for it.

I feel that Lawrence Alma Tadema’s illustrations of the bible stories tries to humanize the Egyptians, who suffered severely for their leaders’ alleged crimes. No doubt they were all hoping for “regime change” but god didn’t even grant them that. Alma Tadema’s illustration of the Egyptian Wife gracefully evokes her despair at losing her husband; it shows us that you can’t get rid of evil by doing more evil – you know, two wrongs don’t make a right and all that stuff? That’s one you won’t learn from the bible.