In one of the TWiV (This Week in Virology) podcasts, they briefly mentioned a book by Ed Yong, I Contain Multitudes. [I guess the publishers are not Bob Dylan fans] Several of the doctors said they thought it was great, or it was on their reading list, so I added it to mine.

Since I had a bunch of stuff to haul, I chose the audiobook version, and had it playing in my earbuds all day yesterday as I worked. There were times, however, that I just stopped and listened. There’s a lot of those sort of moments – not because it’s hard, but because it’s really interesting. 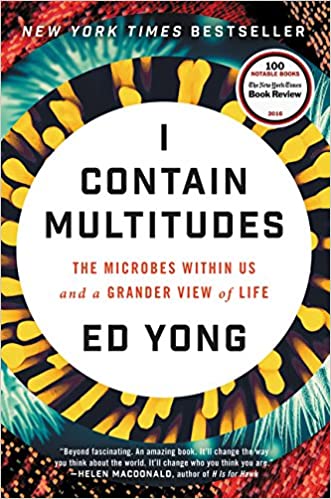 I’ve added it to my recommended reading list [stderr] in accordance with my policy on recommended reading [stderr]. I will note that the audiobook recording is merely OK; the narrator does a fine job, but some of the edits are obvious cuts and distracting if your brain is the kind that catches that sort of thing. The book has a subtle sort of wry humor, and the narrator’s reading does a good job of preserving the tone and keeping it light.

I have to say that some of the science sounded so far-out that I felt it was sketchy, except that Yong does a good job of explaining the experiments and results that led to the far-out conclusions. Generally, I don’t have trouble following science-for-the-layman books, and I didn’t have trouble with this one either – but a lot of what Yong discusses seemed like hardcore woo-woo to me. For what it’s worth, the doctors on TWiV only had good things to say about the book, and I’d expect that if it was woo-woo, they would have only mentioned it to dismiss it. I do plan to do some checking around to see if there are any errors of fact – although with something like this, there are many axes to grind so I’m not sure I’d trust the internet. Here’s a review on The Guardian, [guard] which I’d say is generally highly positive.

The topic is huge: how our lives interact with our micro-biomes; how we shape them and they shape us. Most of us know that (for example) we may each have our own species of eyebrow-mites, which engage in genocidal combat with the eyebrow-mites of everyone we come in close contact with – but that’s just the beginning of the story. [By the way, I have now figured out what Joe Biden is doing: he is being controlled from below by his eyebrow-mites, which have adopted a new strategy for getting their carrier to spread them within the human population. Selfish gene indeed!] As I just wrote that little aside, I realized that it’s not significantly more incredible than some of the other stuff that Yong writes about. The book is chuck full of accounts of how various creatures depend on bacteria to the point where it’s hard to say that specific highly-evolved bacteria are a separate form of life from them. The broader point is: we need to rethink the idea that we have a distinct “edge” to ourselves – we’re not just “us” we’re the cloud of things that go into and out of us, which build us and destroy us. This is a somewhat unsettling understanding; I had always realized that we’re in a wobbly balance between our body’s ability to repair itself and the bacteria around and inside us’ ability to eat us – who can do it faster? If we fall behind, it’s an infection. If we keep ahead of the game, it’s called “good health” for now.

If you enjoyed David Attenborough’s rapturous explanations of the life-cycle of some wasp or other, this is a book for you; it’s like Attenborough doing “The Inner Life Of Your Gut” (which I would totally love to watch!) and – like Attenborough – it flips past things that make you realize that there’s another entire book worth of material, there. Several times I caught myself saying, “wait, what?” and going back. For example: [from chapter titled “Body Builders”]

Why should animals rely on microbes to make these chemical signals? Thiess offers the same reason that Rawls, King and Hadfield did: “it’s inevitable.” Every surface is populated by microbes which release volatile chemicals. If those chemical cues reflect a trait that’s useful to know about – say: gender, strength, or fertility, the host animal might evolve scent organs to nourish and harbor those specific microbes. Eventually, the inadvertent cues turn into full-blown signals. So, by creating airborne messages, microbes can affect the behavior of animals far outside of their original hosts. And, if that’s the case, it shouldn’t be surprising to learn that they can affect animal behavior in more local ways.

In 2001, neuroscientist Paul Patterson injected pregnant mice with a substance that mimics a viral infection and triggers an immune response. The mice gave birth to healthy pups, but as the babies grew into adults, Patterson started noticing interesting quirks in their behavior. Mice are naturally reluctant to enter open spaces, but these mice were especially so. They were easily startled by loud noises. They would groom themselves over and over, or repeatedly try to bury a marble. They were less communicative than their peers and they shied away from social contact. Anxiety, repetitive movements, social problems: in his mice, Patterson saw reflections of two human conditions, autism and schizophrenia. Those similarities weren’t entirely unexpected. Patterson had read that pregnant women who incur serious infections like flu or measels, are more likely to have kids with autism and schizophrenia. He thought that a mother’s immune responses might somehow affect the development of her baby’s brain, he just didn’t know how.

The penny dropped several years later, when Patterson was having lunch with his friend Sarkis Mazmanian, who discovered the anti-inflammatory effects of gut bacterium B.Frag. Together, the scientists realized that they had been looking at two halves of a same problem. Mazmanian had shown that gut microbes affect the immune system and Patterson had found that the immune system affects the developing brain, and they realized that Patterson’s mice had gut problems in common with actual autistic children. Both were more likely to have diarrhea and other gastro-intestinal disorders, and both harbored unusual communities of gut microbes. Perhaps, the duo reasoned, those microbes were somehow affecting behavioral symptoms in both mice and kids. And, perhaps, they reasoned, fixing those gut problems might lead to changes in behavior. To test this idea, the duo fed B.Frag to Patterson’s mice: the results were remarkable. The rodents became keener to explore, harder to startle, less prone to repetitive movements, and more communicative. They were still reluctant to approach other mice, but in every other respect B.Frag had reversed the behaviors caused by their mother’s immune responses.

How? And why? Here’s the best guess: by mimicing a viral infection in the pregnant mothers, the team triggered that landed their offspring with an excessively permeable gut, and one with an unusual collection of microbes. Those microbes produced chemicals that enter the bloodstream and travel to the brain, where they triggered atypical behaviors.

Of course, as Yong points out, that’s hardly an explanation for autism in humans, but it shows an interesting path for further research. There have been plenty of researchers that have pursued the gut/mind communication connection, including Michael Gershon’s The Second Brain (1999) which I read when it came out. [nyt] Yong also touches (albeit briefly) on the apparent anti-anxiety effect of lactobaccilus (the little guys who make yoghurt) which appears to be the basis for probiotics, which I had dismissed as woo-woo. By the way, probiotics still seems a bit woo-woo, to me, since it appears to be a bit premature; messing with things we don’t understand, yet. If the premise is that bacteria affect your mood, the situation is clearly more complicated than we thought before, therefore commercializing human experiments may not be a great idea. One of the other points Yong makes is that the near eradication of H.Pylori (the bacteria that can cause stomach ulcers) has not moved the mortality needle in the human population – fewer stomach ulcers appear to cause more acid reflux and esophageal cancer may be replacing ulcers as a cause of death. 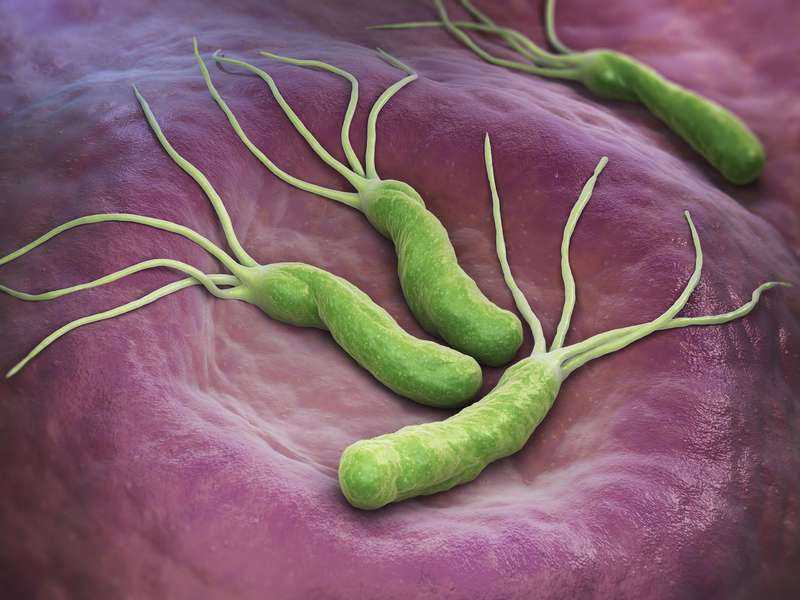 There’s a lot of “we don’t know, yet!” in this book, which I consider a good sign. Given the complexity of the topic, namely that our interactions with micro-biomes are more complex than we understand – it would be unseemly to rush to some kind of recommendation. It’s more like a grand summary of the current state of play.

The book made my mind wander in all sorts of directions, searching for implications beyond the words. One thing I was thinking, as I listened, was that terraforming new planets, as the techno-optimists fantasize about, is almost certainly a non-starter. We’d take our personal biomes with us, but we might forget some critical bacterium that gets transmitted to a plant via a bug, and life-sustaining crops would fail. We seem to have the idea that we could judiciously re-construct a biome, when we’re not even savvy enough to deal with a novel virus. For every element of our micro-biome, Yong points out, there are balances that keep it from swinging to far in either direction; if we lose a regulator that keeps that balance in one direction, we might wind up with an infection, or a missing ability. Just for one example, Yong describes, in great detail, how certain squid adopt photophosphorescent bacteria – they are evolved to identify and contain them in their bodies, but they don’t produce them, themselves. If we didn’t understand that, we might think merely “squid are phosphorescent” and think it’s the squid that’s doing it (somehow) and only take the squid along to our new eden. Then, when we got there 5,000 years of travel later, the squid would not glow. More likely, of course, they’d be immediately infected by the existing micro-biome and obliterated. We might expect that, after millions of years and billions of deaths, transplanted life-forms might evolve to survive in a new biome, but that’s the problem with depending on evolution as an algorithm: it only works if you are willing to wait a long time and tolerate massive casualties. And, even then, it serves up something you don’t expect.

Serving up something you don’t expect is a central theme of this book, and it’s a wild ride. Highly recommended.