This one managed to shock me a little bit, because of what it says regarding authoritarians’ view of what constitutes an acceptable claim. It manages to be worse than some of the worst/flimsiest justifications for torture that I’ve seen.

From The Daily Beast [beast]:

Former President Bill Clinton has talked openly about how he could have killed Osama bin Laden – but passed.

“I nearly got him. And I could have killed him, but I would have to destroy a little town called Kandahar in Afghanistan and kill 300 innocent women and children, and then I would have been no better than him. And so I just didn’t do it,” Clinton confessed to an Australian audience just 10 hours before two planes struck the World Trade Center.

But in The Longest War, a new documentary from director Greg Barker (Manhunt) and executive producer Alex Gansa (Homeland), former CIA agents reveal that they had another opportunity to take out Osama bin Laden with little collateral damage.

Clinton is applying amazingly clear 20/20 hindsight. What he’s talking about is a crime against international law known as “Operation Infinite Reach” which took place in 1998. [wik] Many of you may remember it as Clinton’s “Wag the dog” launch of cruise missiles against an Al Qaeda training camp. Was it a distraction to deflect the media away from his sexual harassment of Monica Lewinsky, or was it something else? If it was something else, what was it? It was an unintentional illustration of the Hitler paradox: if you could go back in time and shoot Hitler before he became a problem, would you?  And, if you did, would the outcome be different? And, if it were, would it be different/better, or different/worse? 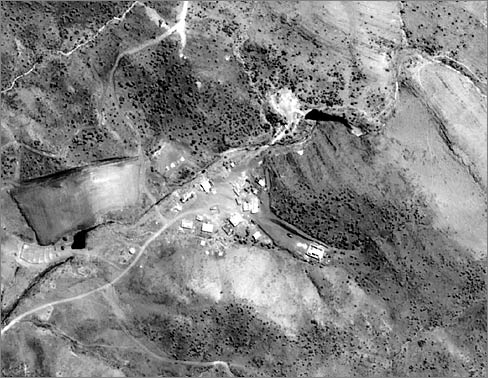 What we now know is that Clinton’s military advisors were recommending area bombardment of Kandahar, or sending in a strike team to locate and assassinate Bin Laden. Clinton’s decision was to shift the location of the area bombardment from a town full of civilians, to a “training camp” used by “terrorist” insurgents. None of these prospective actions were military assistance by invitation of the host country – they were, depending on your viewpoint of reality “acts of war” or “war crimes” or “terrorism.” It appears to have been the first time the US engaged in pre-emptive warfare, which is an odd thing. A pre-emptive missile attack means that you’re willing to do to someone what you think they are willing to do to you, only you’re doing it first and they never get a chance to demonstrate their actual intent to offend. Sure, Al Qaeda was a nasty bunch of people who had published a fatwa declaring war in newspapers, and had masterminded the bombing of a US embassy in Tanzania, but the people who did that were already dead – the missiles were aimed, at best, at co-conspirators.

This is exactly the same situation as if someone were to launch an airstrike on the white house because it contained co-conspirators of the incompetent chucklefucks who bombed a Medcins Sans Frontieres hospital – pre-empt them so they can do no further harm. That’s a ridiculous example, but it illustrates another thing that is ridiculous about the Clinton/CIA claim: if you blew up the president, it would not stop the US from committing further atrocities. On the contrary! When Clinton/CIA claim that they could have “gotten Bin Laden” the response should be, “So what? Ramzi Bin Alshibh was already aiming operations at the world trade center, as was Khalid Shayk Mohammed and Ayman Al-Zawahiri. You could have killed half of those guys and 9/11 might still have happened except they’d be even more pissed off.” It’s what I call “the path-forking problem” [stderr] – we want to assume that a past action would make everything turn out the way we imagine it would, but really all it does is render the past unknown. If we went back in time and shot Hitler, what if Reynhard Heydrich wound up running the Reich instead? He was a more competent and dangerous person than Hitler, and just as committed to hatred. What if Clinton’s cruise missiles had blown up Bin Laden and, in the process of doing so, maimed and psychologically scarred some as-yet unknown insurgent who turned out to be the next Saladin? We know that Bin Laden was the paymaster of 9/11 but it was Khalid Shayk Mohammed who was the mastermind – so it’s not even remotely realistic to assert that “we could have prevented 9/11.”

All you can say in this situation is, “we could have changed things.” Changed things in unknown ways. And here’s the rub: what you already did also changed things. None of the people on the receiving end are talking but what if they enlarged and accelerated their 9/11 attack plans because of the missiles? What if the missiles served as a moral justification for attacking civilians?

When the Afghan tribal networks uncovered that a caravan carrying bin Laden would be traveling along a certain route, they suggested U.S. forces bury a cache of explosives along it to eliminate the infamous terrorist. But Grenier told them they’d be “risking jail” if they did, and that was all thanks to President Clinton.

“The CIA had a so-called ‘lethal finding’ [bill] that had been signed by President Clinton that said that we could engage in ‘lethal activity’ against bin Laden, but the purpose of our attack against bin Laden couldn’t be to kill him,” Grenier explains in the film. “We were being asked to remove this threat to the United States essentially with one hand tied behind our backs.”

See, that’s just weird. With the benefit of 20/20 hindsight, you can say “we should have killed him” but at the time they had no way of knowing if he was a looming threat, or just some blowhard with a fatwa and some excitable followers. In fact, in terms of what we know in time, the CIA was also a bunch of blowhards with a lethal finding and some excitable followers. That’s the problem with pre-emptive attacks: you’re basically saying “we need to commit a crime in order to prevent crime!” Sure, it says you’re all about crime, but that you actually don’t understand how history works.

“The handful of U.S. officials who saw the looming threat clearly – and there were some, mostly mid-level officers at the CIA’s bin Laden unit and the counter-terrorism branch at the FBI – tried in vain to raise alarm bells at the highest levels, but were often ignored and even ridiculed.”

G. Gordon Liddy supposedly said that the only person in the world who scared him was Osama Bin Laden. I hardly need to mention that G. Gordon Liddy is hardly a credible source, and anyone in their right mind would ignore him and ridicule him if they noticed him at all. The problem is that those mid-level officers in the CIA’s Bin Laden unit didn’t know what they didn’t know and so, yes, the most they could do was explain their suspicions and recommend a suitable response. Another of the US government experts was Richard Clarke, who was so susceptible to CIA bullshit that he accepted the story that precursors for VX gas were found at the Al Shifa pharmaceutical plant in Sudan, which was also targeted for destruction. Naturally, there was no sign of weapons of mass destruction after the explosions were done. These are the expert analysts that were supposedly providing a moral justification for a pre-emptive strike? Shit, they were a crazier and more dangerously unreliable bunch of bedbugs than Bin Laden!

What might a suitable response have been? Instead of bombing some chunk of noplace, what about diplomacy? If someone believes there is a conspiracy to commit a crime, which is what terrorism is, it’s at best justification for a police action. The US coulda/shoulda worked with Afghanistan to get permission to land a chunk of the 101st Airborne on the camp to make some arrests and that’s about it. Or perhaps apply some diplomatic pressure to get Afghanistan to eject its guests and move their training operation to someplace else. Honestly, I often suspect that most insurgents would fold up their operations and decamp if someone flew a C-130 over and dropped a bunch of leaflets reading, “we know you are up to some shit, and we have your precise GPS coordinates and we think we’ll blow you away if you don’t agree to talk to us about how to resolve this situation non-violently. Because we’re so much more powerful than you that we can warn you that we can whip your ass, because even if you try to stop us, we can still whip your ass.” It’s not moral to simply conclude “everyone in the camp is presumed guilty” and begin an area bombardment. That’s why area bombardment is a war crime.

So, these CIA goons are claiming that bombing Bin Laden personally was going to be more effective, somehow than the bombing that already happened, which killed a bunch of people, and was ineffective?

When Bill Clinton says he could have killed Bin Laden, but passed, what he’s also saying is that he could have engaged diplomatically with Bin Laden, but also passed on that. Instead he chose a course of incompetent violence, which had nothing at all to do with distracting the electorate by claiming to be a “wartime president.” What’s worrying me, as I write this, is that now these ex-CIA bedbugs are making these ignorant ahistorical claims – why? What do they expect to accomplish by such ridiculous self-justification?

This is the great lie of violent foreign policy: if it’s not effective, it’s because you didn’t use enough high explosive. Exactly how hard do you have to bomb someone to make them love you?

Some Fun » « The Beginning of An End